The forecast was for wall to wall sun so I decided to try for a horse shoe including the corbett Brown Cow hill. It always takes me ages to finally pack up and get away. I tend to be an everything and the kitchen sink type so as well as the rucsac full of essentials I take a camera, phone, binocs, mp3 player, bivi bag, dog biscuits, dog bowl, dog treats and anything else that would make the day more enjoyable. I parked up by the side of the A939 on the right hand side in a forestry clearing just south of Cockbridge Farm. I then went through a gate into the field opposite and crossed the burn just below on two H bars the farmer had put down. I then followed a snowy track up the west side of the Cock burn to the east of Corgarff Castle. The track takes you to the wide saddle between Brown Cow and Carn Oighreag. I then carried on to the south west over difficult peat hag ridden ground to eventually crest the summit plateaux of Brown Cow. The highest point is in the middle of the 3km long top and gave very pleasant walking over short springy heather. Lots of mountain hares in their white coats, some red deer and plenty of grouse lekking. Lovely views of the back of Ben Avon and Glen Builg. On the last top, Cairn Sawvie [820m], I veered to the north west and after another down and up went over Meikle Geal Carn a nice stony top as it's name would suggest. I then carried on keeping to the east of a very new electric deer fence [ see photo ] and on to Little Geal Carn. I then turned north east and finished off the horse shoe by going over Cairn Culchavie. From there, after a cuppa and enjoying the terrific view of the upper river Avon I descended to the track which comes in from Corgarff. There were some keepers out shooting and that took up my interest for a while. I could clearly see them on the ridges and tops on the opposite side of the valley. After hitting the track I then had a long walk back to the car. Total time 6 hours and about 560meters of ascent. This walk would be lovely on a summer day. I had a very cold wind for most of the time but apart from that I enjoyed it. Hope you do! 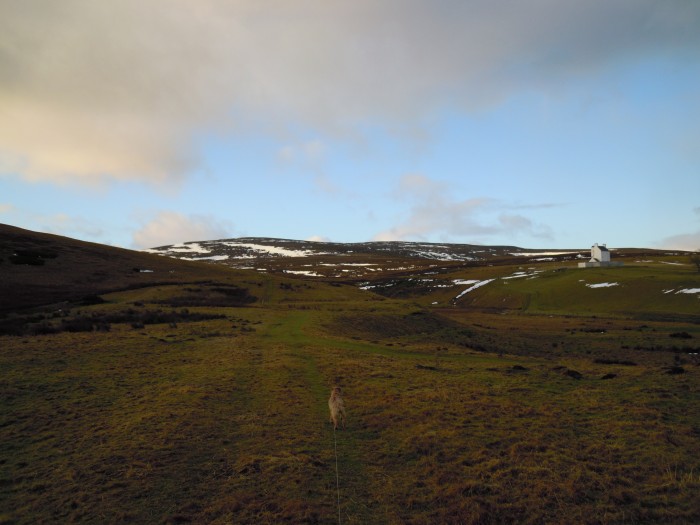 The track for a start 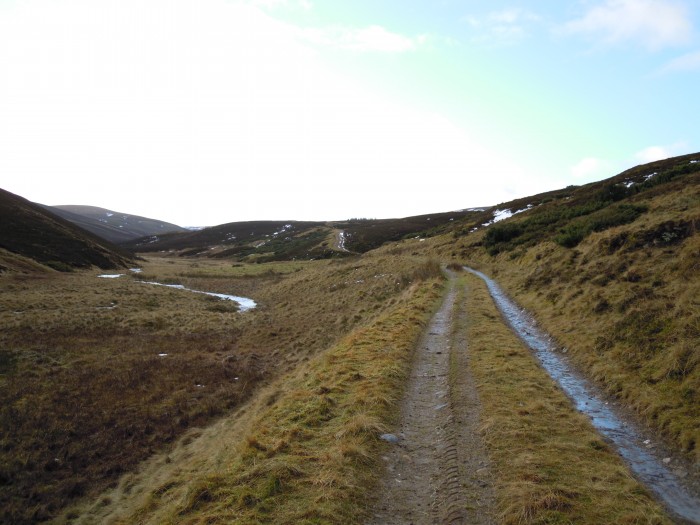 The new electric fence with the back cairngorm behind Hamish loves to roll around in the heather 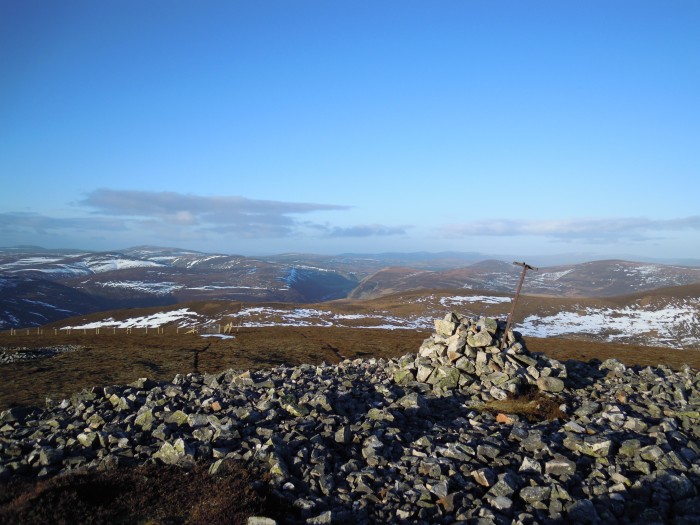 Close up of Ben Avon summit Hamish on the official cairn of Brown Cow, the closest he is allowed to get to cows! The plateaux a broad ridge at 800m 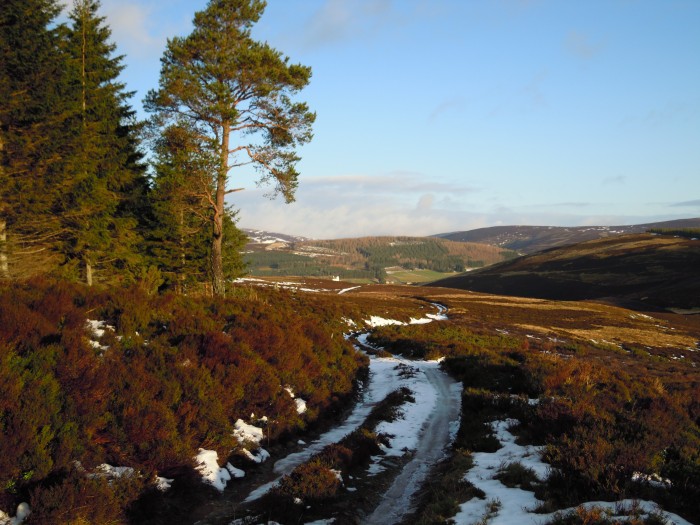 Some good views of Ben Avon there

I didn't think a great deal of this hill, but a little snow and sunshine makes it look great!

This corbett has been on our radar for a while now. Have some vague plans to combine it with some of the bigger hills over a couple days. Will wait till nearer spring time before biting off more than we can chew though .

Is that a Border Terrier?

Nice one - that last photo is a cracker

Hamish is a border terrier. Lots of energy but can't be let off lead on the hill or anywhere near livestock. However with an 8metre extending lead it's not a problem. I'm afraid I made a bit of a hash of uploading the pics. Haven't quite got the hang of it yet and they seem to be a bit ravelled up. The summit plateaux is lovely to walk on with extensive views and it's great to walk the whole chain of tops on the horseshoe. It is a bit of a slog up but it's worth it.

Enjoyed your walk report and photos and especially Hamish. How old is he? Would be good if you could train him to walk off the lead on the hills.
Our two borders were only properly trained at 4 years old and now are quite reliable off the lead and through sheep, but still take a close interest when deer are about!
Look forward to more photos.

Hamish is 1 and a half and if I let him off lead when there is anything around to chase, deer, sheep, pheasants, rabbits, hares, grouse he would disappear and I would be left hanging around until he decided he had had enough running around. That might be an hour or more. He quickly disappears into the woods or over the brow of a hill. We have lost him for hours on occasions and it is a real pest when you just don't know what to do, whether to move and trust he'll find you or stay put and wait. If he finds sheep he'll bark and chase them and if there are red deer around he could chase them for miles. I really don't mind having him on a lead around my waist. He pulls me up the hill at times! It is a fairly long lead, 8 meters so he has a lot of scope for sniffing around and poking his nose into rabbit holes etc. He is a lovely natured dog and I would recommend Border's to anyone. They keep you laughing that's for sure, with their comical antics.

Nice report and brings back some good memories.

I didn't think a great deal of this hill, but a little snow and sunshine makes it look great!

davetherave wrote:This corbett has been on our radar for a while now. Have some vague plans to combine it with some of the bigger hills over a couple days. Will wait till nearer spring time before biting off more than we can chew though .

......... Dave has the right idea. Do it as a prelude to bigger and better things in the neighbourhood to get the most out of it. I did it by walking in from Cock Bridge to rendez-vous with Kevsbald and CurlyWurly beside the River Gairn for a wild camp before tackling Ben Avon and Beinn a'Bhuird the following day. I'd say an overnighter on or around this hill would be right up your street Dave!

Great stuff LOTSW, I really enjoy these rolling beauties (not everyones cup of tea I know) some lovely iconic shots of an area I know quite well

This area is good for wild camping. We've been wild camping while cycling from Corgarf to Braemar. Found a spot below some sheilings in upper Glen Builg. We were running low on meths for the stove but found some dried tree roots, just the job and had the kettle going in no time. I've also done Ben Avon from the Glen Builg side walking in from Tomintoul and wild camping by Inchnadamph.

We were up there last March, snow was knee-deep in places... Winter this year is very mild!