We hadn't had the opportunity to bag a Munro since our ill fated attempt to bag Stuchd an Lochain & Meall Buidhe back in mid-December. So with the weather report looking so tempting we couldn't resist - what's this MetOffice, no red weather warnings

An Socach had evaded us twice in the past, firstly during our trip down Glen Ey to bag Beinn Iutharn Mhor & Carn Bhac when the depleting light meant the 3rd Munro would have to be missed and secondly when we bagged the Cairnwell three back in October. We'd bagged Carn Aosda first and then headed to Carn a'Gheoidh through clag and rain. At the summit of CaG with the clag clearing we stood looked at the map then to An Socach with strong winds billowing around us and just thought nope - we'd still have to come all the way back to bag the Cairnwell itself.

So yesterday was the day to tick 'the Cairngorm whale', as we've been calling it, off our list. We'd considered doing the straight forward WH route but having read joenorris' report from early December (http://www.walkhighlands.co.uk/Forum/viewtopic.php?f=9&t=17201) we decided the circular route he described, taking in Sgor Mor, would have to be it. This would also be Roy's first opportunity to use his new Panasonic camcorder out in the big hills - little did we know that camcorder would have a little adventure all of it's own!

We parked-up at the parking area on the A93 - which was very busy. We were ready for anything; axes, crampons (for him) and spikes (for me), waterproofs, extra layers, plenty of food and water etc. By the time we were on An Socach we were both aware that half of this could have been left in the car but better to be safe than sorry and as it turned out the axes, crampons and spikes were worth it in the end.

There is a padlocked gate at the start of the landrover track which is easy to climb over. We passed the abandoned farmhouse and hot footed it over the stile at the entrance of Baddoch Glen. Rather than continuing down the landrover track we went over the little bridge to the right of the track and began our ascent of Sgor Mor. This hill is pretty steep and I definitely set a pace that was too quick for my post Christmas fitness and by the time we were at the 800 mtrs mark my legs weren't too pleased with me (and neither was my walking partner...

But the ascent began to steady off and became more of a gentle stroll by about 830mtrs. Due to the stillness of the weather and thus the lack of a chill effect I was just in a t-shirt and beginning to regret the thermals I had on under my trousers. But any niggles were put to one side once at the summit of Sgor Mor where we were treated to stunning views of the northern Cairngorms and three of our previous conquests; Carn a'Mhaim, Ben Macdui & Derry Cairngorm. We could also see some peaks of the White Mounth feeling rather pleased to have all of them in the bag.

We headed down from the summit descending from 887 to 750 mtrs before heading back up to the 855 point south west of Sgor Mor. From here we curved around Coire Fhearneasg and began the ascent to the 938 point on An Socach itself. At the shelter cairn we bumped into an old school mate of mine - small world - and had a little rest. From there it is an easy undulating walk to the true summit. The views from the summit were great and again we could gaze at former conquests; the Cairnwell Munros, Beinn Iutharn Mhor and Carn Bhac.

After taking it all in we began the walk back across An Socach. During our decent down to Baddoch Glen we reached the 800 mtrs point and were confronted with icy snow on a very steep descent - a reminder as to why ice axes etc. are always worth taking. As we started sorting out our gear Roy placed the camcorder on the ground - one sudden move from him and suddenly it was off! Roy gave out a flabbergasted 'OH' and I couldn't do anything but watch as a small black bundle of £600 began rolling down 50 metres of icy hill! It was steadily picking up speed and twice was sent flying acrobatically into the air! I'm the type of person who laughs inappropriately and it was taking all my might to hold it in but I'm pretty sure my face was doing this

We'd kept an eye on the camcorder as it took it's little adventure and could thankfully see where it had stopped. Once the crampons / spikes were on and axes out we gradually made our way to its location. Thankfully it was tucked up in its case and in one piece! Safe in this knowledge I could finally burst into laughter without causing any upset. Phew.

After that it was an icy decent to the glen below and aside from the occasional fall on the ice we (and all our stuff) made it back to the car in one piece.

Anyway, photos below (I haven't uploaded them at full quality as it takes ages) and here is a link to the video Roy had taken prior to the camcorders swift descent (it is unlisted but hopefully you can view it)
! 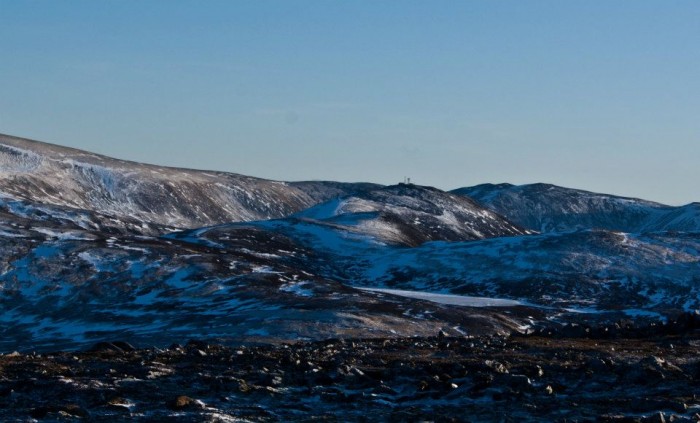 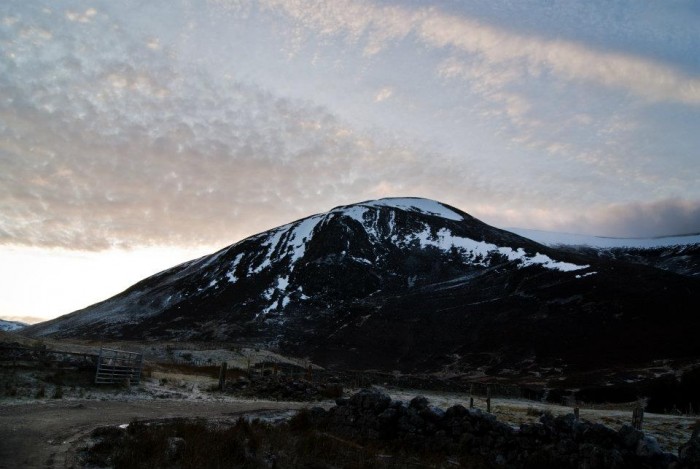 You got some cracking views there and I'm very jealous

Great photos and a fine report!!!

Fudgie wrote:You got some cracking views there and I'm very jealous

Was an excellent day for views

and with such calm weather it felt so serene. Beautiful day. Regarding the camcorder I think I deserve a medal for holding in my hysterics!

Great stuff as always SMR, beautiful crisp photos of a fine looking day, the description of the video bouncing its way down had me reading fast as hell to see what happened

glad it was OK in the end (good ad for panasonic

A beautiful day and some great photos, SMR! I'm glad to see that there was some good weather about on Saturday.

Oh for more days like these - nearly sunbathing weather in January!

ChrisW wrote:Great stuff as always SMR, beautiful crisp photos of a fine looking day, the description of the video bouncing its way down had me reading fast as hell to see what happened

glad it was OK in the end (good ad for panasonic

Cheers Chris - gland you enjoyed the hill - it was a better walk than I had expected. The Panasonic (and it's carry case) certainly proved its worth on the hills. We both marvelled at the zoom! It was a 20x zoom and a pretty impressive picture for it - they must have been 4km away at least. It is a Panasonic SD900 if you were wondering!

Redrock wrote:A beautiful day and some great photos, SMR! I'm glad to see that there was some good weather about on Saturday.

Oh for more days like these - nearly sunbathing weather in January!

Thanks Redrock. Sun bathing in Jan - almost! I'm sure Feb will turn into crazy snow and blizzards to compensate!

Fantastic day for it Smrussell. I was in the West in the clag. Great photos. Jealous

Hi SMRussell
looked a fantastic day the pics are excellent as well.

Fantastic pics. Shows me what i could have seen last tuesday

Oh inappropriate laughing......its the devil in many of us

I've tried digging my nails into the palm of my hand but it doesn't always work!!!!!

monty wrote:Fantastic day for it Smrussell. I was in the West in the clag. Great photos. Jealous

Cheers Monty - after all the clag-fests everyone endured last year you really appreciate the days when you can just gaze around at the beauty of the hills! Although I must admit there was a small part of me that wanted some gales or snow just for a bit of spice


Cheers quoman perhaps a little bit of "Pictures Of Matchstick Men" would have added to the occasion?

jonny616 wrote:Fantastic pics. Shows me what i could have seen last tuesday

Thanks Jonny - the views were braw! Just read your report - it would seem An Socach doesn't like cameras!

Oh inappropriate laughing......its the devil in many of us

I've tried digging my nails into the palm of my hand but it doesn't always work!!!!!

Ta Polly and thanks for the tip

I'll keep it in mind for next time!

This really was a cracking day, I have some carbon copies of photos that you took. We even managed to star in one of your photos.
http://www.virginmoneygiving.com/13in24