After reading the forecast for the weekend I knew I had to get out somewhere, after consulting Matt_18 we decided on heading north for the Cairngorms and Mullach Clach a'Blair and depending on how we were feeling maybe add Sgor Gaoith on too.
My friend Craig picked me up at 5.25 and then collected Eck and were on our way at 5.40. We made good time up the A9 and were in Kingussie just in time to be stopped at the level crossing for a few minutes, then we took the wrong road, it was signposted Glen Feshie but we were meant to be heading for Auchlean, a quick u-turn and we arrived as Matt and his brother Rich, who had decided to join him for his first munro/s were getting ready. The car park was quite busy and we had a quick cup of tea and set off just as daylight was coming in.
Heading along the road it looked cloudy towards the hills but it was not to cold, just fine for walking in.We turned left at the farm and across a little stream where Eck slipped off a rock and landed in the stream, one soaking boot for him already!

We started to gain height gently as we went through the woods and past a mini-digger. It started to get a bit steeper once as we left the trees behind and the plateau was still hidden in clag. It was quite hard going and we were starting to slow down a bit to wait on Eck, who was finding it hard going. We kept telling him this was going to be the hardest part and once we were on the plateau it was realatively flat. Lookin up towards the plateau I was beginning to get concerened that we were gonna be in clag on top making navigation difficult and certainly not what MWIS had suggested. Then as we approched the plateau thankfully the skies cleared, we could tell it was gonna be great when we did get to the plateau and it kind of gave us a little boost for the last section. Once we reached the plateau the the views west were amazing and we stopped for a while to take some photos and enjoy the views. We had a quick check on maps and gps to confirm position and route and set off towards Mullach Clach a'Bhlair, it was good going underfoot and although we were not on the path we still made good time on the frozen snow, stopping now and again for a photo. The stream must have been frozen over, made us wonder what we were walking on

As we progressed towards Mullach Clach a'Bhlair it started to look a bit hazy over the summit although Sgor Gaoith was still clearly visible. As we got closer to our first target the clag seemed to roll in and there was a slight breeze making it very cold for the first time today, by the time we reached the summit visibilty was very poor and we could see absolutely nothing from the cairn, we were all very hungry due to our early start and opted to have lunch at the summit although once we stopped we started to really feel the cold and even with extra layers on only stopped long enough to eat then headed down to the plateau again in search of sunshine. It was just before half past twelve now so we felt we were making good enough time to head for Sgor Gaoith and the ground was good although what felt like a disaster at the time happened, we could no longer see Sgor Goaith

The views from our second summit had been what I looked forward to all week, we kept going though in hope that it would clear by the time we made the 7km journey across the plateau. The general direction of Cairn Toul

We plodded on in the direction of Sgor Gaoith and our luck changed as we passed around the edge of Carn Ban Mor, the outline of Sgor Gaoith became visible and in a matter of minutes the clag had all but disappeared.
Eck was starting to fall behind a fair bit now so I held back and waited for him, allowing the others to head on. Getting to much for some The summit looked quite busy so Matt, Rich and Craig waited on us, allowing it to clear a bit and we headed up the final section almost together, Once at the summit we took a quite a few photos, staying well away from edge as it was unclear where it was land and what was snow. We had a longish stop here enjoying the views and resting our now quite weary legs. 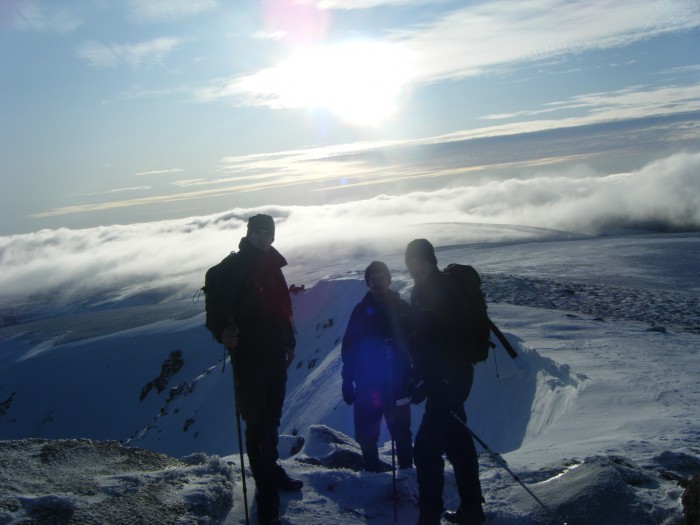 From here we headed back towards the car, skirting around the other side of Carn Ban Mor to rejoin the path for what felt like a longish walk back to the car. I think it was just in time to because the freezing clag came in just behind us, we arrived back at the car about half past three I think although I am sure Matt will confirm our times as he was tracking us on his gps but I believe it took us seven and a half hours all in, covering 15.7 miles.

Sounds like tough going but cracking stuff and some great photos! The snaps from Sgor Gaoith are really nice - such a good looking cragy face! Hi Gary
Excellent report and some cracking photo's especially when you cleared the clag the one of the loch very nice.

Loved your report Gary, so glad the clag cleared for you and some brilliant photos (and from Matt)

Thanks for the comments everyone, can't say how much of a relief it was to see the clag go.

Glad you got the clearances

Must get myself out of my pit earlier at the weekends

Totally in at the Deep End for me Gary, but a fantastic day all the same! It'll be a while before I top that!

Nice one Gary (& Matt). The views from Sgor Gaoith are wonderful.

magicdin wrote:I had considered going over to these hills on Saturday
Have a couple of deleted tops next to MCaB to tick off
But I was lazy and went up Ben Lomond instead hoping for inversion
Not to be -wall to wall clag all day

Glad you got the clearances

Must get myself out of my pit earlier at the weekends

Thats some amount of walking you done, just looked at your hill count there, I think you have earned a few long lies

Rich_28 wrote:Totally in at the Deep End for me Gary, but a fantastic day all the same! It'll be a while before I top that!

You managed fine mate, just have to get out as much as possible to try and top it??

Thanks Alastair, the view was amazing and it was not even to cold to savour it for a while which has not happened to us for a while