I'd like to say my usual bit about being late on the hill and changing my destination at the last minute, but this time I was up at the crack of dawn and went straight to Glen Etive. I must be getting more organised this year.

The MWIS said it would be well cloudy and they were right. I kitted up and slid my feet into big boots for the first time in nearly a year. It felt like having a brick strapped to each foot. I'm a total convert to lightweight footwear, and these boots were the most unwieldy things I'd ever experienced. My ankle was trapped in place and it felt really constricting. Odd, given that I've worn boots for nearly twenty years and never noticed until now.

Fifteen minutes later I was up to me knee in bog and glad I was wearing the boots and gaiters combo. I'd decided to go for the more direct approach, over what appeared to be the Somme. A quick jaunt across the river and I was on the hill, if a bit muddy.

The great thing about Starav is that it doesn't mess about, straight into it, and a consistent angle all the way to the top. My legs complained that the Spartacus 2.0 session I'd done the day before had reduced their chances of getting me up there, but I told them to stop moaning and just got on with it.

I stopped just below the cloud level to have a look back down Etive to Glencoe, and at the same time, stood like a complete eejit on top of a rock and took a photo. It was at this point I realised I'd left the intervalometer in the car. Bugger.  I should have taken a few more attempts to reduce the total crapness of the shot, but I'd got so used to the intervalometer,  using the ten second timer was a pain in the arse. Onwards. 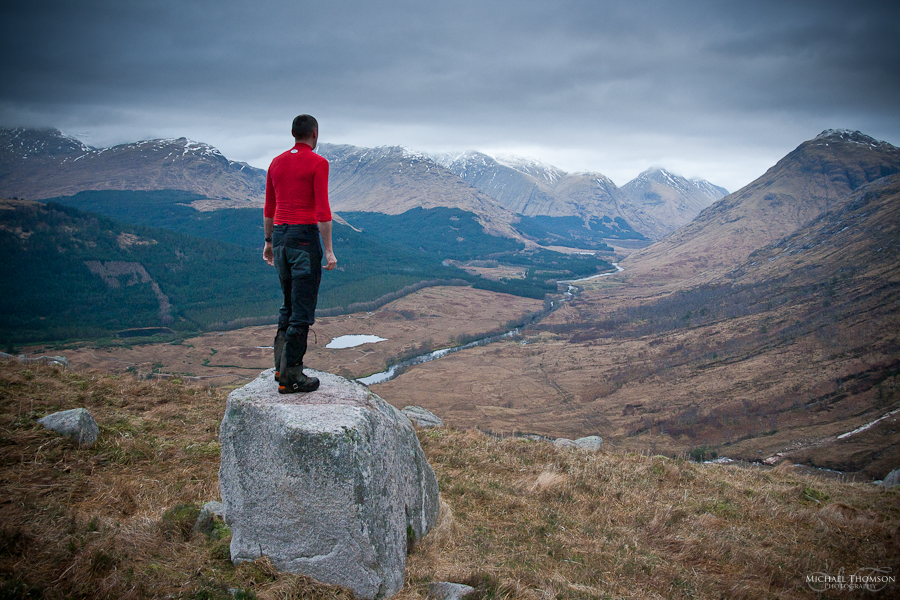 Once in the cloud it wasn't long until I hit the snowline. A few drifts here and there, wonderfully consolidated, then starting to build more rime on the rocks. I made my way up carefully through the boulders, picking a more interesting route where I could. I hit a couple of rocks that were verglassed, which brought a wee jolt of excitement. 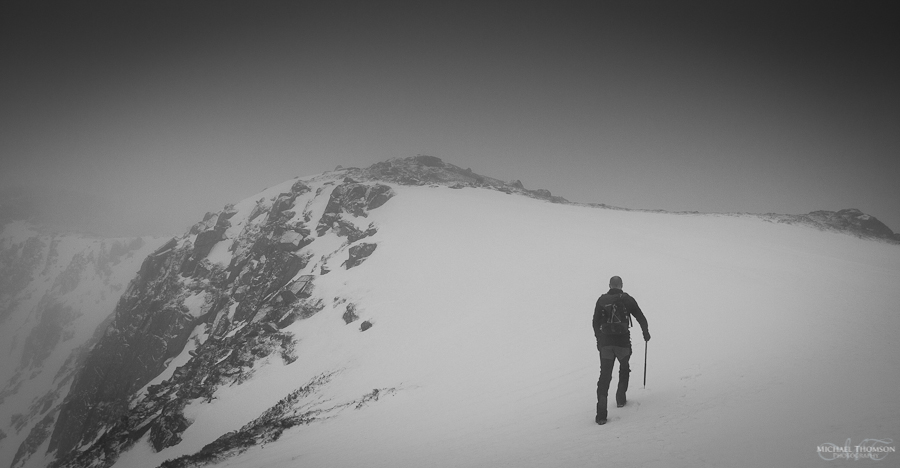 I'd forgotten what a tiny top the hill has, so I stopped and had a wee seat at the cairn. I hadn't seen a soul all day, and it didn't look like I would any time soon, it was completely silent. Here I was, sat at around 1000m with not a breath of wind. It was January at the top of a hill and I was sat wearing a baselayer and a microfleece. Unbelievable. What happened to winter?

After sitting in the silence for a bit, I got up and headed down, pausing briefly to don crampons. Kicking steps was fine on the way up, but heading down the angle was against me. It had been a while since I've had the crampons on. Welcome back old friends.

The descent was painless and quick, marred only by my Salomon Certain Deaths trying to put me on my arse twice on the wet grass.

So the first decent sized hill of the year was done. Time to get back to the route store and see what's next. 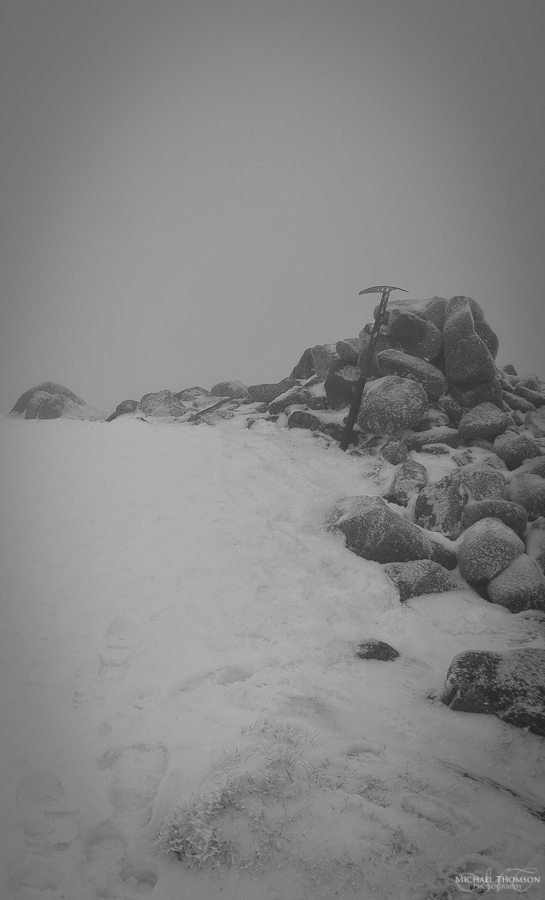 Excerpt from my blog at Scottish Mountaineer.

Hi Michael,
Nice report. Love the first photo. The walk in is a bog and it does come to a point rather sharply. Nice hill though.

Ditto what Monty said re first photo. I was bog trotting up Glen Ceitlin and Meall nan Eun on the same day. The cloud was something of a disappointment and not quite what MWIS had led me to expect. Nice report.

Great pictures as ever.

Thanks chaps. I will attempt to pick a more photogenic day for my next outing.

Hi Michael Thomson
Some nice photos there and nice report to boot.

Nice one this hill

A nice bit of solitude for you. And a nice bit of bog too. That seems to be my weakness most walks

Yeah, I'm a bit of a bog-seeking missile myself! Particularly when I've got trail shoes on.

Agree about wearing trial running shoes - i try to wear when i can.

Did the Starav 5 with trail runners Oct 2010. Boggy at first but fine when up higher and dried out.

This is great MT, made me laugh out loud at some of the phrases "Spartacus 2.0" made me smile but "marred only by my Salomon Certain Deaths" had me laughing. Nice pics too, all in all a really enjoyable read, cheers

Thanks Chris, you're very kind.

Enjoyed following you up into the monochrome world!

Thanks RedRock, I always have fun in the hills, regardless of the weather!

I think fiddling with a self timer to make a Caspar Friedrich kind of shot is a very nice way to make your vanity contribute to the enjoyment of the reader.