Having read some of the other reports for this sparkling weekend of weather it was obvious that alarm clocks were set early here, there and everywhere. However we stayed in bed until 9am and then sauntered around with a leuisurely breakfast until 11am before finally heading south to Carrbridge. The journey took no time and by 12 midday we were strolling out of the car park and along Carr Road heading for the woods.

Leaving the road behind we passed through the gate and along the frozen track through the Pine plantation with icy crusted puddles and hard icy ruts in the mud - enjoying the peace and the warmth of a winters morning. It would appear that this part of the walk follows cycle route 7 south to Aviemore and beyond, however as the track turned to skirt a field we pressed on and out into the sunshine. Crossing a we burn on a plank and then walking in the sunshine through the frozen field and up a 4WD track on the far side into a birch forest.

We saw huge wood ant nests and much fallen timber following the winter storms, and indeed several times needed to divert around the track to get past some. On a gentle gradient we climbed and climbed until eventually we arrived at the edge if the forest in sublime sunshine and to a delightful panorama of the Cairngorm mountains - lightly dusted with snow. A little early for lunch but certainly meritous of a long rest break.

After the stop we walked down past the seemingly empty farm cottage of Dochan Farm and wound down on the road past various empty cottages and homes before reaching the main A95 road south to Aviemore which - alas - our route had to share for just over a kilometre until we managed to cross the road back to Carrbridge and head up to the Kinveachy lodge up the switchback estate roads that eventually enabled us to join the ancient General Wade's Road which marched through amazing granny pines and huge younger Scotties.

A good path and much drier than I would have thought and such beautiful forest of Native woodlands, albiet slightly marred by the fact that on the left was a high deer fence which was covered in bright orange plastic fencing. This I supposed is to stop the Black Grouse flying into the fencing - and surely they would see that, quite jarring on the eye.

Eventually Wade's road opened out briefly to give a sweeping view to the right before reaching the crest of the hill and then falling swiftly to cross at a wide burn. Of this we had forewarning and I had stowed a set of wellingtons in my back pack which I donned, crossed and through back across for Cecile to follow. Sweet, simple and dry feet.

The time was now getting on but happily we were rewarded with a change of landscape, and a dry path that ran straight, true and level. We walked swiftly along heading to the bridge at Sluggan passing some wonderful old Scots Pine Root Sculptures.

We arrived at the bridge in the Gloaming and then turned into the woods immediatley behind it as the dark approached following a boggier and heather clad track which happily eventually opened up beside the river to avail us of the last of the light as we crossed the farmland towards a footbridge, that crossed to a track which led us back to the A9. Then under the railway and through Bogroy on the road back to Carrbridge since it was now to dark to find the wee footbridge leading to Carrbridge station.

A wee sit down and a rest by the twa bridges in Carrbridge marvelling at the warmness of the weather and then a well earned drink in the hotel pub after which the air felt much colder and we repaired to Inverness instead of camping. 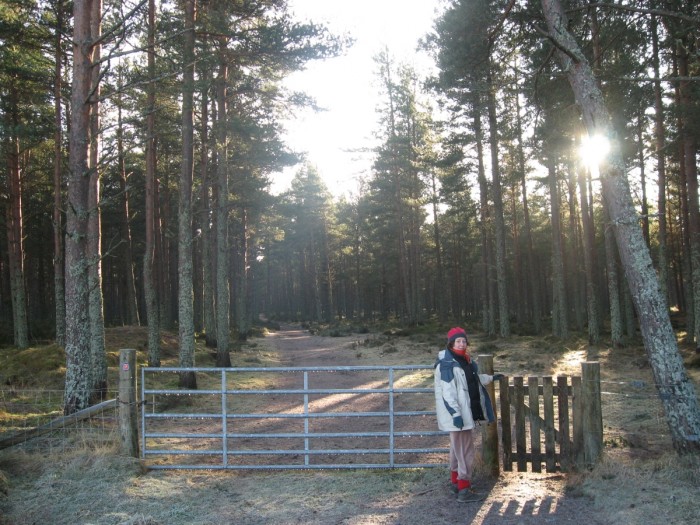 Entering the Woodlands behind Carrbridge


Carrbridge.gpx Open full screen  NB: Walkhighlands is not responsible for the accuracy of gpx files in users posts