As an antidote to grassy mounds, here's a rocky clamber I've done many many times.

Park up at the foot of Tryfan, just across from the end of Llyn Ogwen. No time to catch your breath, the route is straight up from the car park kissing-gate. The rocky stair case first follows the wall past the stiles that leads to the climbing ground of the Milestone Buttress, and then bears left and up toward the obvious shoulder above. Keep close to the rock wall to your right, and at any point from roughly halfway up as soon as you fancy climb a break in the rock. At this stage there are a variety of routes you can follow, and you will find polished holds all over the place.
About halfway up the ridge, you reach the first key waypoint, the Cannon. This is a large leaning boulder that points out over the valley from the end of a wide quartzite ledge. 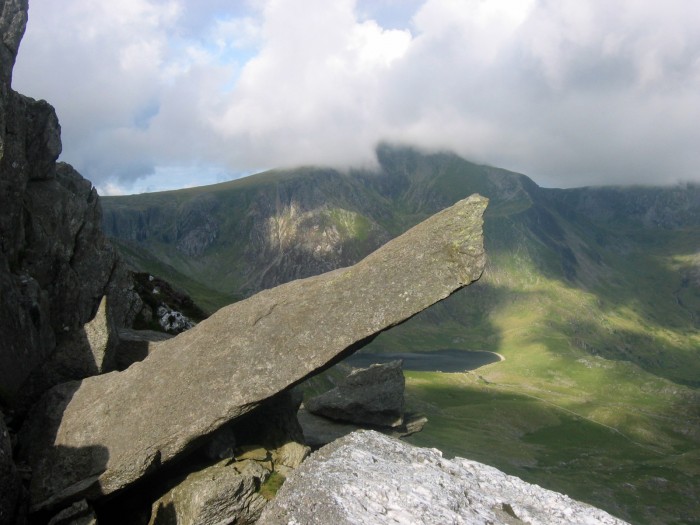 A little higher you will come across a white quartz covered plateau, and from this point on your choice of routes will be funnelled into one or two. Just after this is a small drop and flatter section and you will be faced by a steep rock wall which can be avoided to the right. This takes you to a rocky and rough gulley, which leads to the top of the North Peak. Nearly there. Drop down easily, and then up to the highest point of Tryfan, the twin upright boulders of Adam & Eve. Depending on the conditions, you may wish to gain the 'Freedom of Tryfan'. All you have to do is jump from the top of one boulder to the the top of the other. Its only a short hop of about 4 feet, but as you will see the top of each rock is VERY shiny! The exposure is also 'interesting', particularly to the east side. The first time I did it was early in the morning on a beautiful still day, I stood on Eve for several moments plucking up courage, and then jumped across to Adam. 'Well done' said a voice from below – I almost fell off in surprise!
It should be said you need a good head for heights for this one, and even Wikipedia advises caution.
From here the route takes you down the south ridge, but care is needed in the first few yards beyond Adam and Eve, as it is fairly exposed. The south ridge is quite straight-forward, and leads to the col between Tryfan and Glyder Fach. The fun continues by clambering up the Bristly Ridge. From the wall at the col, head up and slightly right to the obvious gulley. The gulley is an entertaining steep scramble in two sections, leading to the crest of the ridge. There is little option but to keep to the crest, the drop on either side is substantial. Soon afterwards comes the first of two pinnacles with a pronounced notch between. The easiest way down into the notch is to climb down to the left. The Great Pinnacle is the other side of the notch and appears awkward. Go round the base to the right, and then go up a shallow gulley to the left. This leads back to the crest, and soon afterwards the end of the ridge. Climb down onto the plateau of Glyder Fach, not far from the Cantilever which is definitely worth clambering onto. Why it is still there or even how did it end up like that in the first place? Next up is the great tangle of huge boulders that form the summit of Glyder Fach. The scramble to the top and then down again is entertaining, with some large and deep holes to avoid.
Is there more? Oh yes. The rocky tower of the Castle of The Winds is a famous landmark and is good sport. You can go round it to the left, but that would miss out on quality scrambling over the top. Descend to the Bwlch y Ddwy-Glyder, and then follow the right hand upper path to the start of the Gribin Ridge. The upper part of this ridge has some spiky scrambling with exposure to the right, but this can be avoided to the left. The view across to the cliffs of Glyder Fawr is splendid. 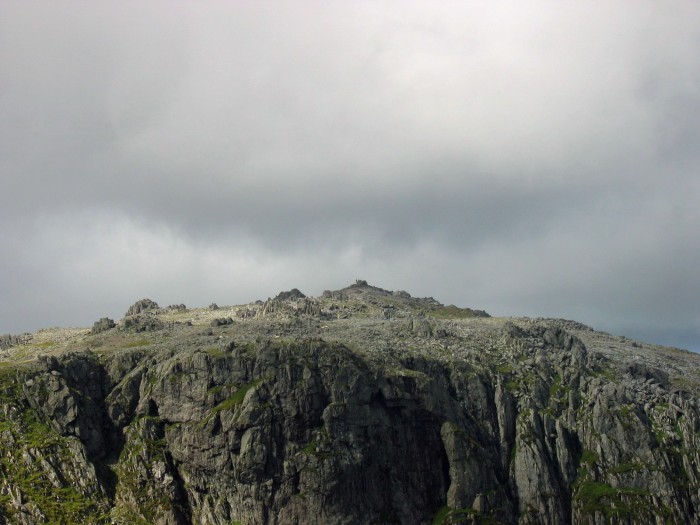 Follow the ridge along, past the top of the Cneifion Arete, and then all the way down to the ridge end near the outflow of Llyn Bochlwyd. Follow the clear path down past the crags of Bochlwyd Buttress, and then break right across fairly boggy ground to head back down to the A5 and your starting point.

This is just such a fun route that I keep coming back to it. Definitely a fine alternative to grassy mounds. Enjoy!

Only done this route the once but intend in doing again this year as I enjoyed it so much. You never really feel that exposed on the North ridge and the only real difficulty on Bristly ridge is Sinister gully. The views of the Snowdon massif are amazing from Glyder Fach. You've got me itching to get back there!

Try the Grib Lem ridge up onto Carnedd Dafyd. Apologies for spelling, from memory. Not too many people around and in a quiet part of Snowdonia which is so rare. It is a grade 1 also.

Yes have done that one, and as you suggest it was so quiet I had the whole ridge to myself. It is another excellent route.

So glad you didn't fall or slip. How potentially nippy could it have been?

What a cracking 6k that is, captured beautifully in your photos too

I think I've seen a pic of someone standing on that cantilever on WH though I can't find it now. Anyhow, great report thanks for posting

clivegrif wrote:As an antidote to grassy mounds, here's a rocky clamber I've done many many times.

Nice photos of one of the best areas in Snowdonia

Having grown up only 25 minutes from here, these used to be after-school hills for me, which seemed normal at the time, but now looks rather spoilt!

Despite my preference of the Highlands now, I doubt there is anywhere better for scrambling in the UK than the area within a miles radius of Ogwen Cottage. With such easy acces, I haven't often done both of these in the same walk, but the round of Cwm Bochlwyd is one of the best around.

For a more difficult scramble in the same area, I'd suggest the Dolmen Ridge of Glyder Fach. I'll try and get some photos of it later in the year.

Nice report! So looking forward to doing this walk/scramble.

Good report. Tryfan is one of my favourite mountains. I love the way you start scrambling straight from the A5 with no walk in, and that once you've been over Tryfan you're straight onto the Bristly Ridge. I've done this several times now. There are a number of ways to extend the walk from Glyder Fach, including the complete traverse of the Glyders.

We tried bypassing the crux of Bristly Ridge to the right once when a friend bottled out, but I wouldn't recommend it. We ended up going up a gully which seemed harder than staying on the ridge, though the exposure was perhaps less.

Hello Phil, I know the point you mean, and I wouldn't recommend that bypass either. Although it might not look it, it is better to follow the ridge.

Unfortunately your experience is not uncommon, there is that point on the Bristly ridge that does seem to unnerve some folk.

...but glad you both made it in one piece!