When I finished work on Saturday the forecast was pretty good compared with recent weeks - 50% chance of cloud free Lakeland summits and little or no wind. I decided to head for Blencathra then - a mountain I have been longing to get back to since finishing the Wainwrights. This was also going to be my loyal sidekick - Todd's - first walk on the fells for 2012. Not liking the wind in his face has meant his excursions have been limited since December.

I wasn't sure on which route to take with the forecast - I fancied a good day out, but there wasn't much point staying high if the clouds were lingering. I was also tempted by Sharp Edge which I am fairly confident Todd could manage, and until 9pm this was the plan, when I rechecked the forecast... Incredibly it was now 90% chance of cloud free summits, which meant three things for me - go high, stay high, stay out all day!

Starting out from Threlkeld at 7.30, it was minus 2 degrees, but in the East it definitely looked like promising weather! And even at this early hour it was light enough to walk. The plan was to go up via Hall's Fell ridge and playing it by ear once we were at the top. I was surprised Todd willingly got out the car in that temperature, but after 15 minutes hard walking, the juices were flowing and we were at the bottom of Hall's Fell. Looking up it looked like we were in for a goodun! And looking back there was a stunning sun rise in the East. Onwards and upwards then, this certainly helped me forget about the cold! Before long Todd had heard something in the East and I spotted it soon after, a low flying plane coming in. He must have seen me getting the camera out as he cut the engine and gave us a wave! Thanks Mr Pilot. Soon after this we were at the start of the Hall's Fell ridge, which Todd made mincemeat of. It is a fairly straight forward ridge, with paths to the sides if needed, but despite the icy polished rocks, the only route for us was straight across the top! From the top of the ridge looking back down, it was clear that another part of the forecast was almost right... big inversions were predicted, I guess these were little ones but fairly impressive none-the-less! And so onto the summit of Blencathra, where the views were stunning. Nobody else on the summit either which just made it extra special. The early bird definitely did catch the worm today! Still unsure where exactly we were heading today, we set off across the summit towards the top of Sharp Edge to have a looksie. Just as we got to the summit tarn, Skiddaw caught my eye. It definitely looked tempting, and suddenly I found this was the day's next objective. Normally this would be an awful walk through a few miles of bog, but luckily with the hard frost it should be ok today! Despite the eagerness to get to Skiddaw though I was somewhat wary of the next probably 800m of climbing on top of Blencathra which would be needed to get up and then back to the car! But on we trudged! We still headed across to the top of Sharp Edge to have a look down... this is Todd pondering over whether it is doable - the way he leapt down the top half I wouldn't put it past him!! There was one guy just out of shot on the edge I think, which is what Todd is looking at! The next step was down the icy and cold back of Blencathra - which was fairly hairy in places, with no grip at all on the slates... very much grateful for the walking poles at this point as we head towards Mungrisdale Common, which was bathed in sunshine and actually a pleasant place to be on a day like this. When I was last here in September it was very wet! Onwards to Skiddaw then, via Skiddaw House and up over Sale How. This involved dropping straight off the end of Mungrisdale Common and across a couple of rivers. Todd decided he couldn't jump half a meter though so it ended up me carrying him across

I thought I had been really clever in finding a good narrow place to cross - not looking at my map - only to find I was in the middle of a dog leg and had to cross again... lol.

This is looking up towards Skiddaw House with the frozen Skiddaw behind. On the climb up the other side, I began to see how busy Skiddaw was, so had lunch on top of Sale How, with a lovely view of our final climb up to Skiddaw. This was surprisingly a good route up to Skiddaw - nice and gentle when compared with Ullock Pike/Long Side, but significantly more quiet than the direct route up from Keswick... And after a quick lunch we were quickly on top of Skiddaw, where once again we were rewarded with stunning views! Looking here towards Blencathra where we previously were, with Sale How in the foreground and Mungrisdale Common in front of Blencathra. And here looking along the summit of Skiddaw where a star shines bright! And looking across the trig to Blencathra. The anemometer recorded -5 on the summit so it wasn't a place to hang round... a few minutes later we had got to Little Man (and the next one I forget the name of), which was much quieter, but with just as good a views. This seems to be an often ignored summit, with the prospect of the easier path to Skiddaw itself too tempting for some!! And keeping up with the good timing (remembering the plane earlier) we arrived at the summit just in time to see this chap/insane person preparing for lift off. 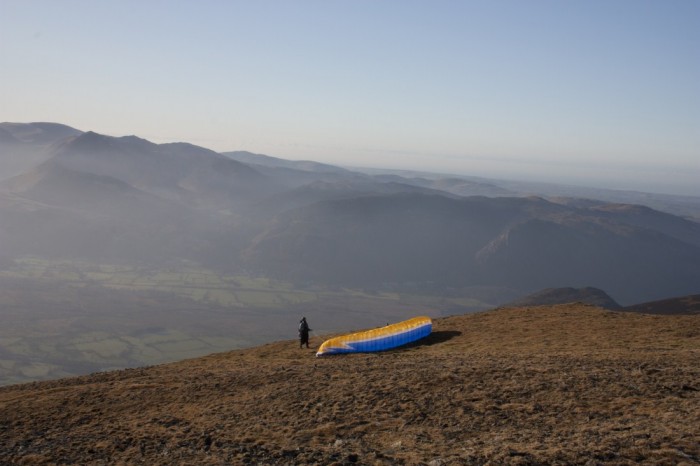 And sure enough, a few minutes later he was off, admiring what was a very impressive view! Which was us almost done... descending the horrifically steep front of Skiddaw back to the car park and having a smug chuckle at everyone heading up (although it did seem a bit strange how many people were heading up at 2pm, with only a little daylight left!!) the relatively dull tourist track I still wasn't sure what the best route back to the car was. However with still 2 hours of daylight left, I thought a trip up Latrigg (about 100m climb from here which was done in about 10 minutes - although after the rest of the day the legs were really burning after this) was in order, if only to get a shot looking back towards Skiddaw... As well as maybe a final shot of Derwent Water and the Western Fells. Before a nice descent to the East from Latrigg towards Wescoe - although there was a river which had to be crossed before here, which did have a foot bridge, there was a ridiculously steep and slippery path down to it. This was probably the only scary part all day!! And only when I was at the bottom did I find the nice gentle path down

typical lol... This then allowed me to simply pick up a track/small road back to Threlkeld and the car. A final shot of Blencathra saw the end to one of the best days I have had on the fells, albeit a long one. Definitely looking forward to a few more days like this in the near future please! Top stuff. Never seen anyone link these two together before (although I'm sure it's done occasionally).

Saturday really was an amazing day, and Blencathra is a great hill. Skiddaw is the only British 3000er I haven't done. Not too sure why that is.

Also, maybe it's just me, but what's with all new forum members showing up as having zero posts? I noticed this on someone else's profile too, even though they'd posted 3 or 4 times.

Not sure I have only posted once before

I think I have seen them linked a couple of times but I think unless very dry or very cold it wouldn't be pleasant as the drop between the two is boggy! Unless you came down Blease Fell I suppose!

wow - that is a good long wander and a great report and photos to describe it, either one of those would have been enough for me

Great report and pictures.
They are on my favourites list too!

They are linked together in the first leg of the Bob Graham round (sort of)...
Keswick-Skiddaw-Great Calva-Blencathra-Threlkeld
Does that count?

Wow, that was a fantastic walk and so good you were able to make the most of the weather. Great photos as well