Maiden journey into the Mamores

Maiden journey into the Mamores


After 3 consecutive weekends of pretty rubbish weather, a short spell of high pressure arrived like breast milk to a baby. Due to their relative accessibility, I had "saved" the Mamores for just such occasions. I calculated I would need to start the walk by 10am to be finished during daylight and it was exactly then that I started.

[I should point out that the minor road leading to Mamore Lodge has a discouraging sign at the gate at the bottom of the hill reading something like:-
HOTEL CLOSED
PRIVATE ROAD TO STALKERS COTTAGE ONLY
GATE MAY BE LOCKED AT ANY TIME
It's possible I may have missed this sign on the way up because I parked at the Lodge... Hence saving those valuable 200m ascent.

The first 3.5km along the track were enjoyable as views opened up along Loch Leven and height was easily gained. 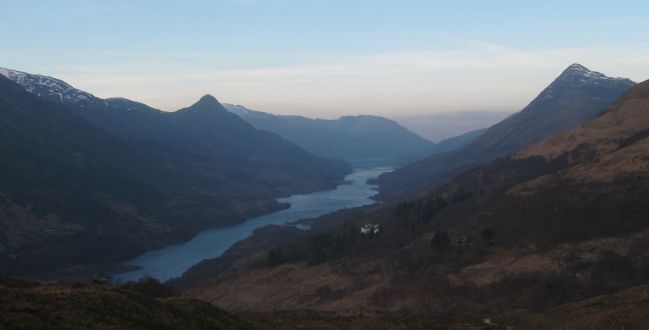 As Loch Eilde Mor came into view I joined the obvious stalkers path on the left. I could also see it's course around the shoulder of Sgor Eilde Beag a mile or so in the distance. The path itself was excellent. Most of the ground was frozen and the sunshine and firm terrain reminded me of last April rather than the wet and wind we have so far experienced this winter.

I was now faced with a choice: to continue past Coire an Lochain into the corrie as suggested on this site or head straight up the steep nose of SEB? I tested nearby snow patches and my mind was made up. The snow was firm and icy (barely taking a crampon). I reckoned a NE facing corrie would be tricky (if not dangerous) so headed straight up the steep but snowless southern slope of SEB.

I was not bothered by the thin layer of cloud hovering around 900-1050m as I knew I would be climbing through it. The walk to point 1062m was easy and full of optimism. 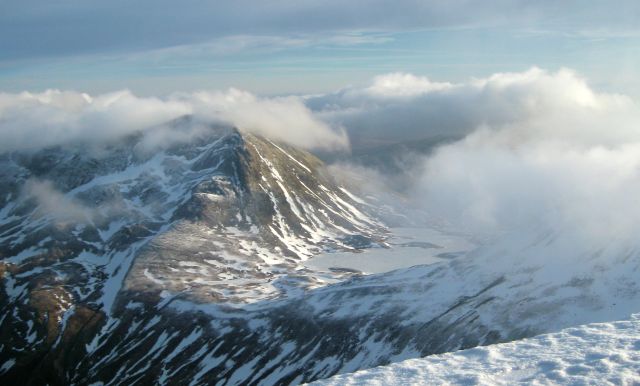 Here the wind hit me. It was freezing and I stopped to put on insulated jacket and crampons. However, such minor inconveniences were completely overshadowed by the reveal of Ben Nevis and the narrow ridge leading to the summit of Binnein Mor 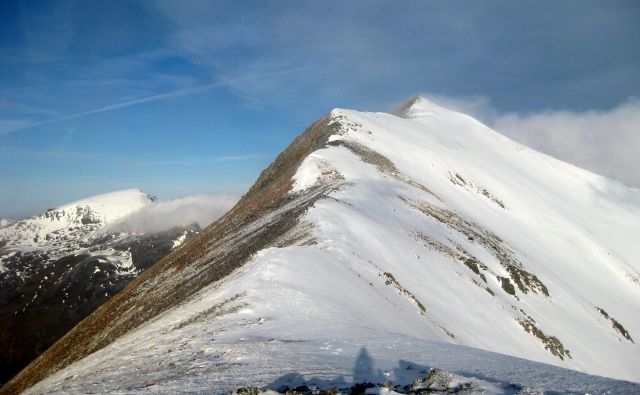 The short walk to the summit required care as the ridge narrowed and the snow hardened. A slip here would have almost certainly been fatal as I am not sure I could have arrested a slide such was the hardness of the snow. The summit of BM was a cramped affair as I tried to shelter from the breeze but still soak up the views. The situation was intoxicating and I did not want to leave 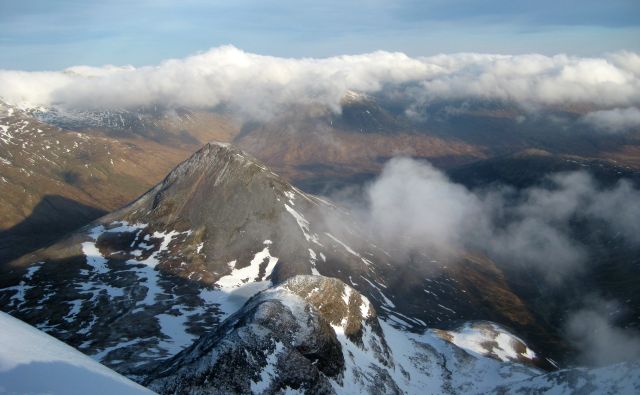 looking down to Binnein Beag 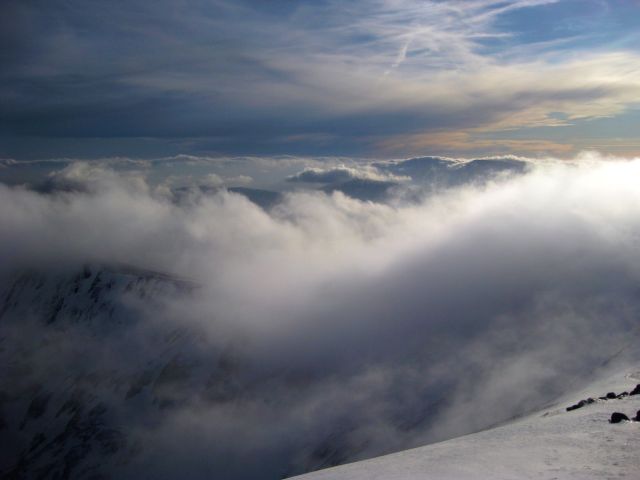 However, the clock was ticking so I set off back down (again, with care) past the minor summit to the high col below Na Gruagaichean. 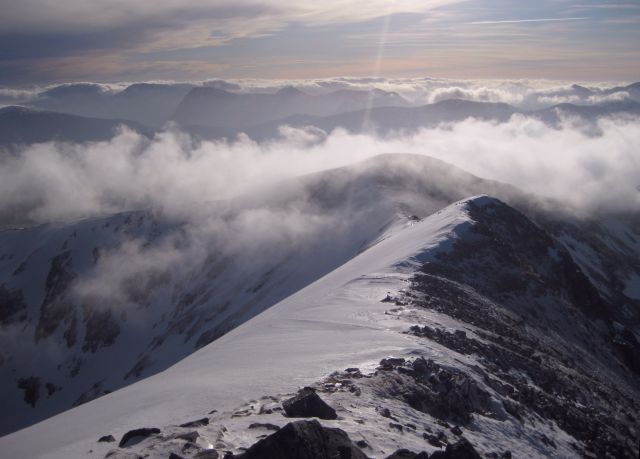 The short climb to the summit was again in cloud but this only added to the sense of excitement at the anticipated views to come... 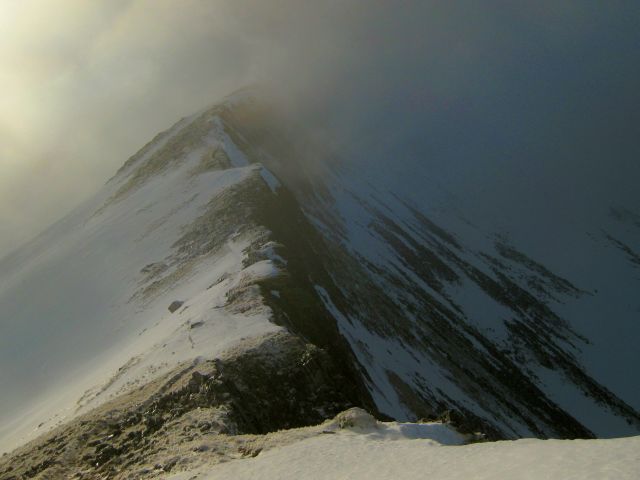 As it transpired the summit was also in cloud (it is 74m lower than BM). However, after a 10m minute break the cloud cleared completely (it was now about 2:30pm) and the surrounding mountain wonderland was revealed in full. HOW HAVE I NEVER BEEN HERE BEFORE 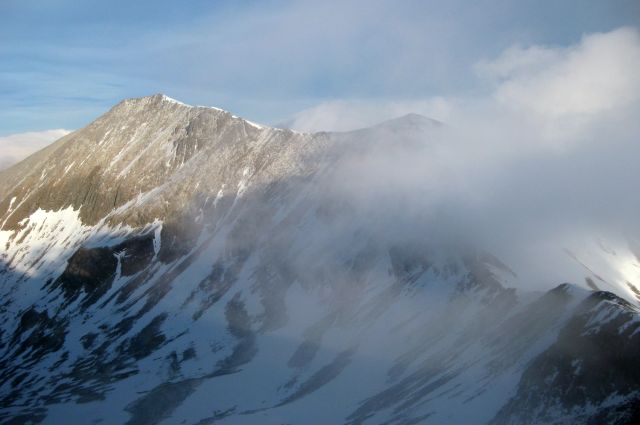 The descent was straightforward following the ridge north to Leachd na h-Aire then heading WSW back to the track. My eye was pulled south to the Aonach Eagach ridge, west along Loch Leven to Beinn a' Bheithir and nearby to Am Bodach. Only the last couple of hundred metres were awkward as the top-soil had thawed over the frozen under-soil making conditions a little slippy! I got back toi the car at 4pm.

The above summary cannot do justice to a magnificent day out

. I cannot wait to return to this fabulous range of hills with their sweeping ridges, soaring peaks and easy terrain.

What a wonderful report Leithy and truly spectacular photos, the 4th & 5th really caught my eye but all of them are stunning. What a great walk....I reckon you'll be back there very soon and I know I'll be glad to read the report once you do

fantastic stuff. I did these in complete clag. I just felt as i was walking the ridges that they would be stunning & your photo's do them justice. I remember the sign also, but did not see an actual gate.

I love these hills

Some of the best I have ever been on

Loved your report and your pictures. Shame about the cloud at timers, but that can add to the atmosphere I think

Great atmospheric photos - hope you get similar conditions for the other eight.

Some cracking atmospheric photos there Leithy

Hoping to venture into the Mamores later in the year, looks like I'm not gonna be disappointed

Brilliant: that's one of my favorite walks and you had a stunning day for it!

I love how easy they are to get around in winter, yet they feel like proper mountains, with narrow ridges and big drops.

The summit ridge of Binnein Mor is the only place I've had to do a proper ice axe arrest on steep ground. Fortunately the snow was a little softer than what you appear to have had.

A fantastic report, Leithy, and those clouds just added more atmosphere to your pics!

I hope to be back at the Mamores again soon myself - they are brilliant mountains! Cheers!

By the way, there is a gate at the foot of the Lodge road - not very welcoming to us walkers - especially if they do lock it!