Deepdale Horseshoe - a new acquaintance and an old friend

Deepdale Horseshoe - a new acquaintance and an old friend


As I drove down from the Kirkstone Pass an item on the radio reported that today was “Blue Monday.” The New Year resolutions have been broken, it’s a long time until the next Bank Holiday, and amidst a load of other things, the Christmas spending credit card bills will have started to arrive: depression and gloom all round. The one element they got wrong for this year was that the weather was most likely to be lousy.

For me, this Monday was definitely a bright and colourful blue, and with the prospect of another great day on the Lakeland hills. With the car parked up at Cow Bridge by Brothers Water I was ready to go.

I planned on starting with something new and finishing with an old and favoured friend. The former was to be Hartsop above How which forms a lengthy and alluring ridge that rises straight to the top of Hart Crag. It also acts as a backdoor onto the upper reaches of Fairfield, from which I aimed to revisit St Sunday Crag.

MWIS had forecast a 90% chance of cloud free summits, and as I clambered up the path through Low Wood the other 10% was revealed. With everything else clear, a cap hung over Hart Crag and Fairfield. Maybe there would be depressive blue tinge to the day after all.

Hartsop above How with Hart Crag and Fairfield in background

Once the trees were left behind, the ridge up Hartsop above How was an absolute pleasure. Gentle undulations followed one another easily and the frozen ground overcame any potentially boggy bits in between. Optimism convinced me that the breeze ands sun would combine to shift the cloud that still persisted over the tops of my next two objectives.

The optimism hung on a shaky nail as I entered the cloud and visibility shrank to just ten or fifteen yards. For a while I just plodded on upwards. Then, a big cairn appeared out of the mist. I didn’t feel tired so thought that this must herald the start of tougher steeper things to come: but the ground dropped away steeply just beyond. A quick check on the GPS revealed 823m and I was already on Hart Crag.

The path round to Ling Hause became clearer, with the cairns round to Fairfield gradually being illuminated by occasional shafts of sunlight as the clouds began to break up. Then, with perfect timing, just as I reached the shelters on the top of Fairfield, the breeze stiffened and the mists dissipated and disappeared altogether. Huddled figures in the corners of each shelter told of the quickening wind and biting cold. Like the day before on the tops across the valley, it was not a time to hang around.

Cofa Pike, pinnacle-like, stood in the way of progress on to St Sunday Crag. It’s always looked imposing and challenging, and now wreathed in frost it ratcheted up its intimidation factor. However, on closer inspection, as is so often the case, it softens and lets you through without too much of a struggle.

I was looking forward to a gentle amble across St Sunday Crag, enjoying the memories of previous visits and direct ice-axe thrashes up from Ruthwaite Lodge in Grisedale below.

And then I got hit by a train.

Well that’s what it felt like. I’d spent a sheltered ten minutes snatching a sandwich in the lee of some rocks. Then I got up and tried to walk normally. In the meantime someone had turned up the fan in the wind tunnel by five or ten notches. It shrieked across the ridge and for the next half an hour or so I was flayed and whipped by toggles and straps that seemed determined to detach themselves and head for Scotland as quickly as possible. Any hope of a gentle walk across the top was out of the question; staying upright was paramount. 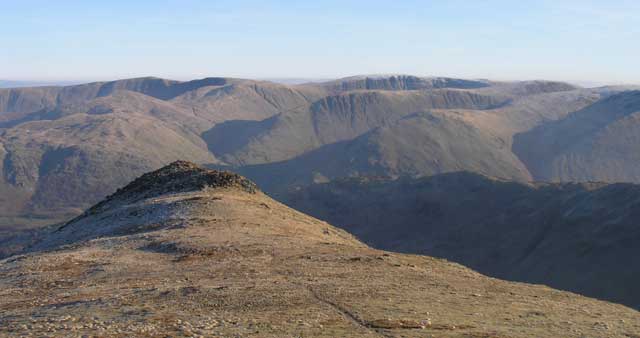 Finally, as I diverted off to Gavel Pike, then headed on to Birks, the wind’s intensity dropped to a more manageable level and more controlled descent could be enjoyed.

Once over Birks I left the path that swoops down into Grisedale and, bearing off to the right, followed the remains of an old wall down to Trough Head. I wanted to follow the path over to Arnison Crag before heading down into Patterdale. 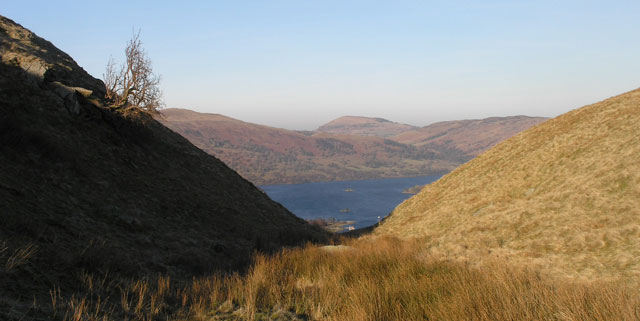 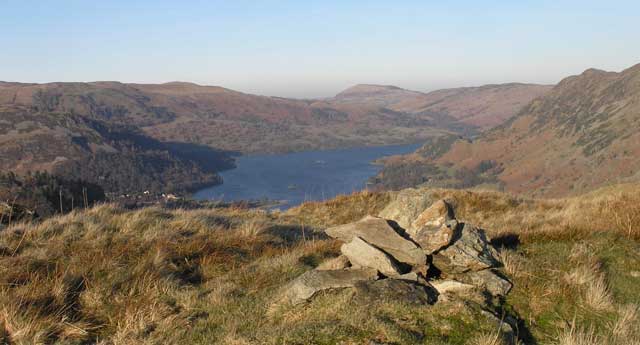 A horseshoe walk from tip to tip, with contrasting experiences in each part of the day. It hadn’t been a Blue Monday after all.

Thoroughly enjoyed reading your report, what a great day you had! Some fantastic photos aswell

My wife Carol and I did the exact same route last March but in Reverse.

Initially we were just off up Arnison Crag, Birks and St Sunday Crag then back via Deepdale. However as normal I suggested we go over Cofa Pike, to Faiffield and back via Hart Crag and Hartsop above How and encouraged to go for it.

Yes Bonzo, I was surprised with the GPS reading when I got down - but there are lot of ups and downs on the initial ridge up to Hart Crag - they soon add up.

Great report OD with beautiful pano pics to accompany it, love the wide view from these

your description of the wind left me feeling it with you, really enjoyed this wonderful walk

loved reading this report a good day you had and some cracking picture's well done.

It takes in two stray Wainwrights, Arnison Crag and Hartsop above How I've been after and St Sunday Crag which I haven't been up for years! Thanks for the inspiration!