In September of last year, I was granted a week's holiday from my work as part of a contract renegotiation (not bad if you can get it!) My first instinct was to plan a week-long trek over as many mountains as I could climb, but caution led me to plot a slightly more sensible schedule. On the Monday morning, I would travel from Prestwick to Ardrossan on the train, take the ferry to Brodick and take the high road to Lochranza over Cir Mhor and Caistel Abhail. After a strenuous day, I would take it easy until Thursday, travelling around Loch Fyne and Loch Lomond before returning to Glasgow for my girlfriend's birthday. Then at the end of the week, I would return to the hills by tackling Ben Vrackie and heading across to Rannoch Moor. It was a packed itinerary, and I hadn't done much hillwalking on my own before, but I figured it was worth a go. If I was still standing for the last day of the trip, an epic walk from Corrour to Kinlochleven via three summits, I would be a happy man.

I perhaps cheated a bit on the first day, choosing to grab the bus from Brodick to the Glenrosa road end, but I figured time was of the essence if I was to make it over the hills by sunset. The classic Goatfell view from Brodick was somewhat hampered by cloud cover.

After a mad dash for supplies in Co-Op, I jumped on the Stagecoach bus to Glenrosa, and within five minutes was in the farmland around Glen Shurig walking north along the campsite access road. As soon as you leave Brodick you realise that Arran, especially the North of the island, is as quiet and unspoilt a landscape as you could imagine, especially given its close proximity to the Ayrshire coast. I had always wanted to climb the four Corbetts on the island since childhood, and with Cir Mhor and Caistel Abhail still remaining, I figured the best tactic was to go for both on the same day. Unfortunately, the weather today was looking rather foul. Dark and menacing cloud covered the mountains for the entirety of the ferry journey, and now squally showers were adding to the fun as I scarpered along the clear path up Glen Rosa. This is supposed to be a much-photographed view of Cir Mhor and a lone tree in Glen Rosa. Sadly, only the tree was visible.

With the rain intensifying, I got the waterproofs out and laboured up Glen Rosa to the split in the path below the Saddle and Fionn Choire. My only real escape route if it got any worse was to head over The Saddle and scurry down Glen Sannox to safety, but I fancied my chances over Cir Mhor at least, and headed up the steepening path to the corrie. The paths in the Arran mountains are excellently maintained and, for the most part, not too boggy. Happily, conditions started to improve in the corrie, making a rather steep ascent much more pleasant than the flat but dour conditions endured in the glen. Glen Rosa is a magnificent glen with mountains like Beinn Nuis and A'Chir to the west and the towering flank to Goatfell to the east.

At this point, things began to pick up considerably. The blanket of cloud slowly began to break up and dissipate, while to the north the searing tower of the Rosa Pinnacle appeared out of the mist, with Cir Mhor behind. At the head of the corrie the view opened out considerably, with the entire west side of the island revealing itself and sunshine steadily trying to break through. It struck me when studying the bleak remoteness of Glen Iorsa that the entire centre of the island, except for the National Trust for Scotland footpaths and the String Road, is essentially wild. The forests on the lower slopes give way to open moorland higher up, with very few signs of human habitation. This was an awe-inspiring sight, especially for an island so close to Glasgow and one which is traditionally viewed as a Clydeside tourist haunt. The cloud started to sweep away from Casitel Abhail to the North, revealing much of the route ahead.

If the view from the top of Fionn Choire was breathtaking, half an hour later the panorama from Cir Mhor was beyond words. After a slow but steady ascent up the southern ridge on a more bouldery path, during which the cloud returned to the mountainside for one last flurry, I arrived at the summit suddenly and without warning. Had I not been reading the map properly, I may have assumed it was a minor top on the ridge, and carried on regardless until reaching the Saddle down below! Thankfully, I waited at the summit for the clouds to clear, and the results were incredible. It's the first summit I've ever reached without a trig point or cairn, and that's probably because there's no room for one.

The summit is rather exposed and in strong wind probably wouldn't be a picnic, but the path is obvious enough the whole way up. The walk from Cir Mhor to Caistel Abhail is very simple given the altitude, and follows the path round the Coire na h-Uaimh to the second highest of the Arran Corbetts. The views from here on were nothing short of tremendous. Approaching the summit of Caistel Abhail, a splendid view opened out of the route from Cir Mhor. Finally the top was reached, and after deciding which of the tors was the highest (the furthest away of the two on the summit, as I remember) I went round to the other side and clambered up to the top. Views in all directions from a point like this are obviously magnificent, although the views to Ayrshire and the mainland are blocked slightly by Goatfell. 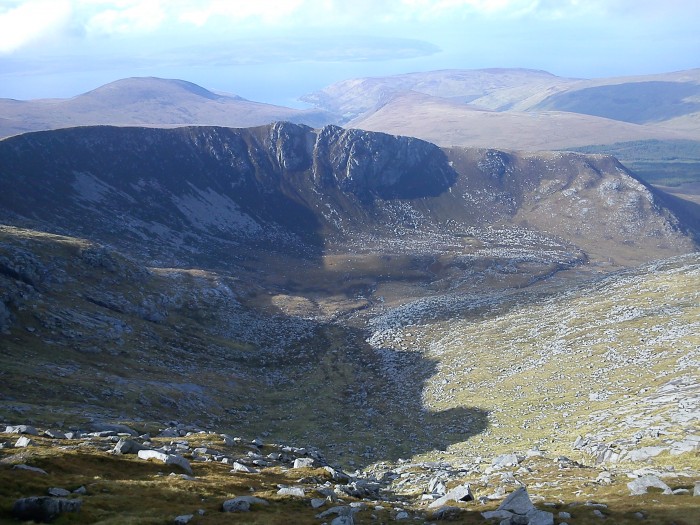 Lochranza and the end of the route from Caistel Abhail. Goatfell, Cir Mhor and Beinn a'Chliabhain from The Castles. Of course, it wouldn't be Scotland without the rain swinging by again, and as I headed down towards Loch na Davie and swung west from the path, the cloud returned with a vengeance. One minute I was sat on the shoulder of the hill watching over Glen Iorsa and Beinn Bharrain, the next it was getting decidedly chilly. It was also at this point that I started to get rather tired, perhaps exacerbated by the impending darkness. At 6pm I left the Loch (which, strangely, has a tributary at each end) and headed North towards Lochranza. Having rejoined a path downhill, I expected this to be the easiest part of the trek, but in a theme which would become recurrent over the week, the descent ended up taking a surprising amount of time. Perhaps it was just tiredness after a long day, or perhaps it was the quality (or lack thereof) of the remarkably boggy path from Loch na Davie northwards, but I ended up becoming quite uncomfortable at this point, eventually speeding up into a jog of sorts as I headed downhill. The path from Loch na Davie to Lochranza is not as straightforward as the map suggests. The walk is either amazingly popular or the catchment area of the glen is so large that it gets an unusual amount of rain. After 7pm light started to fade badly, and at this juncture the prominent waymark of Torr Nead an Eoin seemed to get further away rather than closer. Finally, after what felt six hours but was in fact less than two, the path reached a fence near a waterfall and turned west to reach the bright lights (there are a few!) of Lochranza. Relief all round, I felt. From here it was just a short jog down the hill to the back of the Isle of Arran Distillery. On the way, though, I noticed movement in front of me in the undergrowth. Startled, I wondered what creature could be lurking there. I had read reports of adders spotted in the Goatfell range, and wondered if one had found its way to the path and slithered down from Loch na Davie (much like me, actually). To my enormous surprise, it was not an adder, or a snake of any description. It was much smaller than that. It was an unexpected but welcome deviation from the script, and as I reached the main road and staggered along to find dinner at the Lochranza Hotel, soaked and exhausted, I felt assured that it had been a memorable day all round, and a cracking pace-setter for the week ahead. At least if I had got lost in the darkness and needed to bed down for the night in the hills, I would have had some company.

Some smashing photos there ,they look lovely hills . I haven't set foot on Arran since I was 10 , that was a wee while ago now , think I will have to give CalMac a call this summer