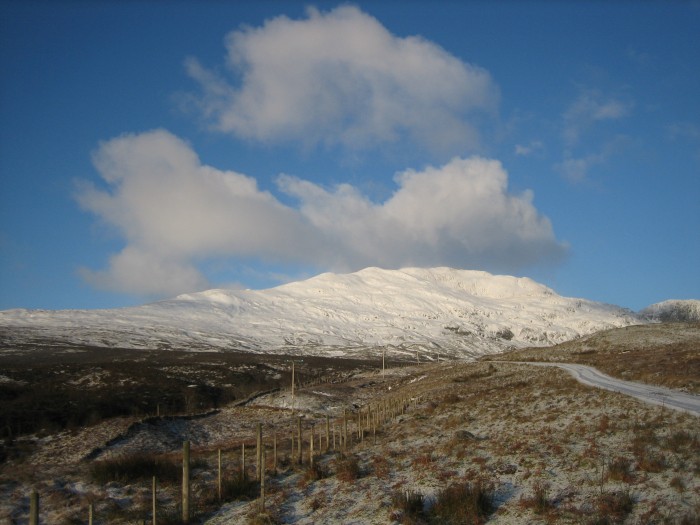 With favourable weather reports and a couple of days off from work , the chance came to get back out on the hills.
Looking for somewhere not too far for a solo drive from Glasow and to mark up another munro i decided to tackle Meall nan Tarmachan.
Finally arriving after the drive i was looking forward to getting started and out into the fresh air but with fresh snowfall and a car with rear wheel drive the road up from the forest to the start caused me some problems and i wasted around 25 mins trying to get further up the road. So after reversing and finding somewhere to leave the car it was time to get the boots on and set off. Just as i was doing this another car was also struggling to gain any height so the driver just reversed and parked at the back of me.
After a short walk up the road i reached the gate to start the walk at 10am. Follow the path down at the other side of the car park for around 20 metres then take a right and follow the path as it steadily rises towards the shoulder of the hill. Keep following the path and cross this bridge

You keep to the path then go through another gate where you are now onto the slope up to the South East Top. A path of ice and snow up the hill

After a short descent from the S.E Top you cross another stile then it is the final push up to the true summit. As i was reaching the top there was 3 blokes who i had quick chat with. They were up from Newcastle for the weekend taking in a few munros then driving back down after this , their final munro of the weekend. My next target Meall Garbh Looking back to MnT with Newcastle blokes

Although the conditions were nice, crisp and clear it was still chilly up there and the fingers at times were very cold. Trying to take photos with gloves on and sometimes off was not ideal. Looking back to Meall Garbh and MnT

As in other reports there is a rocky section coming down off Meall Garbh which can be a bit dodgy in icy conditions and when i reached it , i just turned round again and went back up a few metres. Looking back down i aimed slightly to the right which takes you down through the grass which is a lot easier. As you come down go towards the right

Coming down off Meall Garbh i was looking ahead towards the ascent of B,n,Eachan thinking it looked easy enough although as i started my ascent it turned out a bit steeper than it looked and i found myself really kicking steps and using my axe as i made my way up through the rocks and snow .

As i came down from Beinn nan Eachan i decided to leave the last top and just aim for the bealach and go for the walk out. The bealach in sight with Creag na Caillich up behind it. A dirty big cloud coming in over Creag na Caillich

As i left the bealach i aimed South East past an old quarry onto a track taking me all the way back to the car park.
Arriving back at the car 5 1/4 hours later it had been an enjoyable day out on the hills.

Lovely pics Woodsy. I haven't kept a list of the hills I've walked (I really should start doing that

) - so it's nice to be reminded of an enjoyable walk by reading a report on here. I didn't do it in winter - looks stunning.

Brilliant photos Woodsy - how the **** did you manage that

Glad you got to use your ice axe - been a while

Cracking report and picture's there woodsy.

That was a great read. I'm tempted to head for that area tomorrow but I'm very undecided

excellent stuff woodsy boy, looks like you had a great day

Great photos and a belter of a day

Woodsy Boy wrote:As in other reports there is a rocky section coming down off Meall Garbh which can be a bit dodgy in icy conditions and when i reached it , i just turned round again and went back up a few metres. Looking back down i aimed slightly to the right which takes you down through the grass which is a lot easier.

Thanks for this tip, it will come in handy when I do the Tarmachan Ridge this summer!

Top stuff - some wonderful photos too

Good stuff woodsy and a cracking day for it, i did this in cloud and by the time i was down in Killin it was clear blue sky

Been on MnT twice and seen heehaw, so nice to see what I missed, and in its winter coat too

Hopefully 3rd time lucky sometime this year an I can finally take on the ridge walk. Cheers