High pressure?! Yes apparantly, and just in time. My annual September migration back to London has been fast approaching and I've been distinctly frustrated by the lack of walking weather lately. However, with winds dropping and cloud clearing for Wednesday, I decided to get two big days walking in before the journey south on Friday.

Quick pack of the car and off at 4.30 on Wednesday morning for a first light start in Glen Feshie. The target: a massive traverse of the Moine Mhor, taking in the four munros which surround it.

As I set off from Achlean farm the weather was looking promising, a bit of cloud around but a fresh breeze to blow it away and a bit of sun to burn it off. I headed down the glen first, cutting left just after the end of the 1st woods to make a direct ascent of Meall nan Sleac from the NW.

My Route goes up the slope on the right

As I gained height the views opened out back down to Glen Feshie and into the massive trench of Coire Garbhlach. At the top, I dropped just off the otherside and headed off up the bulldozed track to reach the plateau. As the plateau is reached, Cairn Toul suddenly comes into view, looking very square from this angle. The walk to Mullach Clach a'Blair is very straightforward from here. From the summit, pretty much my entire walk across the plateau was visible, looking deceptively easy...

Back to Glen Feshie 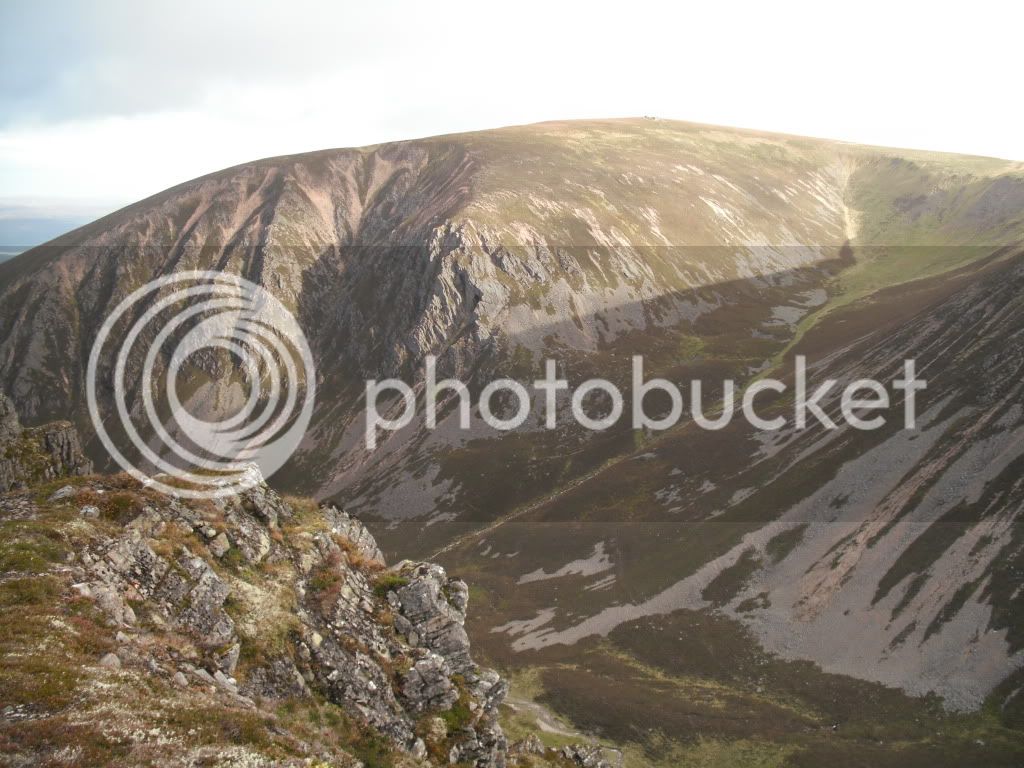 Across the Coire to Meall Dubhag

South from Mullach Clach a'Blair, Beinn a'Ghlo on the left, Ben Dearg on the right

So I headed down across the Moine Mhor, down into bog, and up over a lump, down bog, over lump and so on, until I reached the munro top of Tom Dubh (just before here there was a spectacular waterfall on the Allt Sgairnich which I failed to get a good picture of unfortunately). After Tom Dubh there was a fairly tricky rivercrossing before heading onto the slopes of Monadh Mhor.

The going was on fairly easy angled and grassy slopes (with the odd boulder field) so I reached the top of Monadh Mhor in no time at all, to be welcomed with an amazing angle of the Devil's Point and Cairn Toul, with Ben Macdui behind. Fantastic!

The descent to the bealach below Beinn Bhrotain is pretty steep but the path is good. The reascent is steep and bouldery but on reaching the summit cairn of Beinn Bhrotain I was rewarded with the fact that I was now at the furthest point of my walk.

Devil's point from the SE slopes of Monadh Mhor

I headed back over Monadh Mhor and down to Tom Dubh, passing the latter on it's North side and navigating the incredibly complex river/bog/loch/lochan system that seems to cover a massive area of this bit of the Moine Mhor, eventually emerging from the bog at the head of Coire Odhar with a view down the length of Loch Einich to Speyside, with the Sgor Gaoith on my left and the Braeriach massif on my right, the sound of the roaring waterfall adding huge atmosphere to this incredible place. 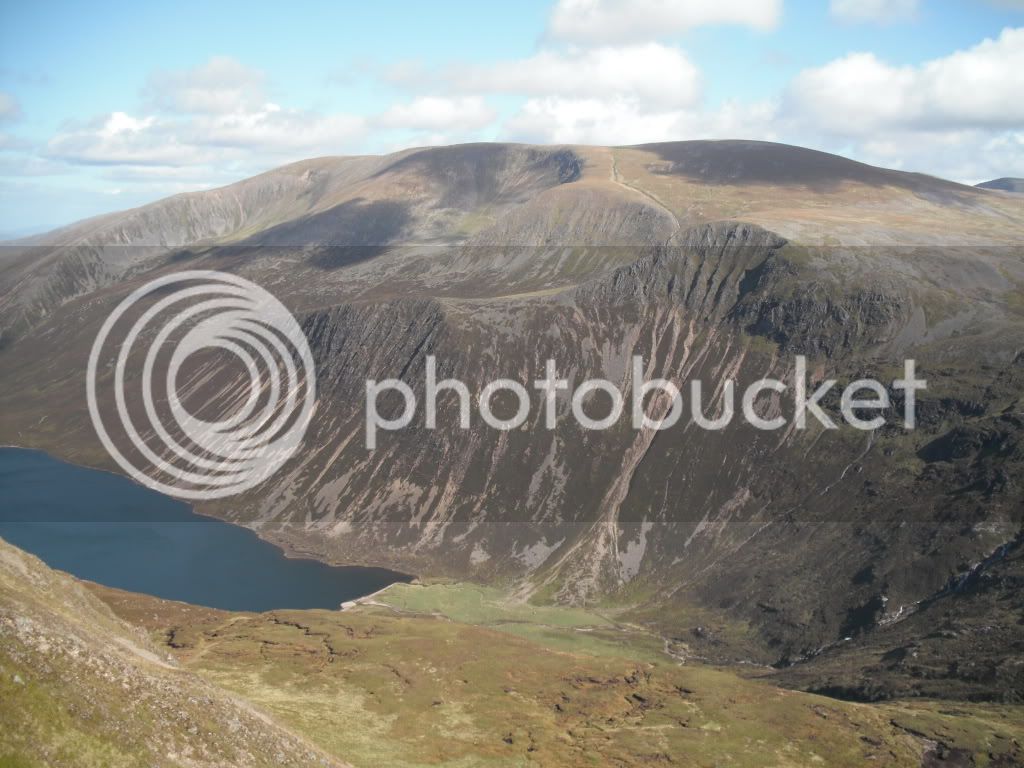 Around the top of the cliffs with views straight down to a herd of deer in the Coire, finally up onto Sgor Gaoith, possibly my favourite summit of all of the Cairngorms, bar perhaps Sgor an Lochain Uaine. After sitting gazing across the monumental cathedral of Coire Odhar to Braeriach for a while I decided I'd better head down. I headed over Carn Ban Mor and down the Foxhunter's path to Glen Feshie, a bit more tired than I had anticipated.

Glen Feshie from the Foxhunter's path

Now for an exhausting drive West to camp at Loch Garry in preparation for an early start ready for Day 2 of Benno's frantic 2-day walking extraveganza. Watch this space...

Great photos,this is one of my fave areas..thanks for posting

Great report and photos - you've taken all the shots I missed when I did a similar stravaig across the Moine Mhor. I really liked the area and found the striding out just great! I just didn't feel much like stopping and taking photos so I took very few. I may yet put out a report on it though... Congratulations on finding and bagging Tom Dubh! Must be one of the most unvisited tops out as it's just so inconvenient! Sgorr Ghaoith's great isn't it!

Hey MC, Tom Dubh is slap bang on the Walkhighlands route to Monadh Mor and Beinn Bhrotain, it'll be the most bagged top in Britain soon

I love the Moine Mhor too - such a vast, high open space, can't really explain the feeling of being up there. I've heard a few other people claim it is dull, but not for me

Yeah, but we already did Monadh Mor (which I liked) and Beinn Bhrotain which I didn't mind but Richard hated (in fact he hated the whole walk as it was long and our return was boggy and went on forever! In fact, I've done everything round Tom Dubh now so, unless I do something again, it will have to get missed!