Good Omen for the Early Bird

Good Omen for the Early Bird


The early bird catches the worm. In this case, I am the early bird, the worm is a metaphor for a memorable sunrise. I set off from Glasgow at silly o'clock, the stars visible as I sailed up the A84, figuratively of course. As I turned into Glen Lochay, my Ipod shuffled onto 'Gotta Get Back On The Mountain' by Ray Lamontagne. Indeed Ray, indeed. And on that note, so to speak, I marched off from the standard parking spot at 0630, head torch on for the first hour.

And after 90 minutes walking, my day really did begin. The stars gave way to a rich glow filtering from the east, the almost linear clouds appearing to converge at the light source. 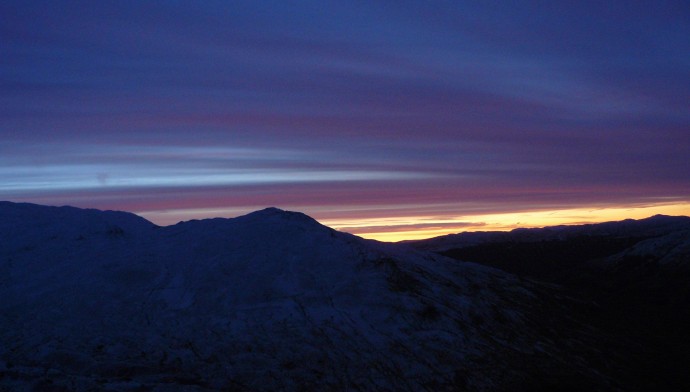 I spent more time staring in awe at the light, walking for 5-10 mins at a time before being forced to get the camera out again. 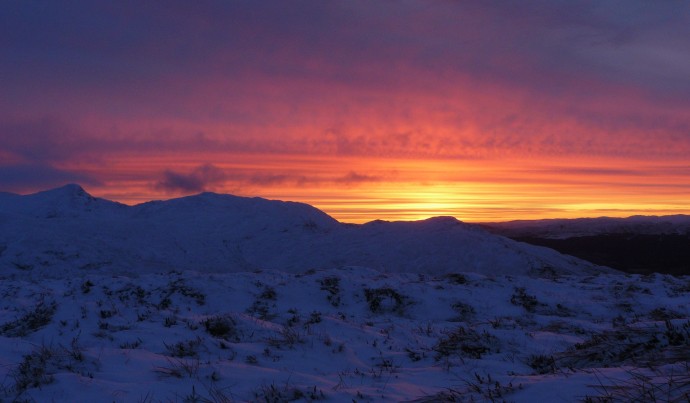 I was keen to gain height before the sun came up. Before long the sun popped up and the snow glistened. I made the most of taking in the brilliant colours on display, before turning towards Meall Ghaordaih. I almost walked into some feathered friends - they didn't seem to mind me being there. I had my axe and crampons with me but they weren't used. The last few hundred metres was mainly fresh snow over ice, easy enough to walk on so long as the ice wasn't exposed by the wind. I've added a few stock photos - me at summit, Glen Lochay and Glen Lyon. 2hrs 20min to the top, with plenty of stops.

Me at the top, a nice shelter around the trig point. After the initial icy section, I made light work of the descent and was back at the car for just after 10. I met a group setting off, they asked if crampons were needed (I said take them!) and that they saw a lovely sunrise on the drive up. I didn't have the heart to tell them what they had missed.

As I drove by Loch Lubnaig, I just had to stop and get a pic or two. The place looked alpine, crisp still air, still water and glowing white hills. I like this last one quite a bit, once I did a certain something to it. No prizes for guessing! I'm still buzzing from today's walk, and once the dust settles I still think it will rate amongst my top 3 hill days. Not bad for a sub 4hr jaunt on a supposed 2 star hill!

Braw!im a big fan of gettin up at silly o clock anaw, but proved well worth it for yerself!

Was up at half 4 but that was for work, i certainlt didnt get the worm! nice one1

Excellent photo's. We saw the sunrise as we drove up Loch Lomond and it looked amazing.

Stunning first few photos - well done you. I was racing against the sun before it came up but alas Beinn Sgulaird was too far for me to get this. A memorable day I'll bet.

oh wow those are fantastic!

Superb photos,the 2nd one is my favorite

Well worth the early rise, I'm hoping to get something similar for tomorrow

Woo Hoo, aint wee lucky. i got some okay ones , not near as good as yours though.Well done indeed.

Brilliant photos. Bet you wish the photo competition had already started.
Well worth getting up early for - I can only get up that early in mid-summer!

And they are eligible for the photo competition. After the vote to decide the format, all February's entries will be photos taken in January

Thanks everyone, I was lucky and the early start paid off. After a dreich winter so far we are all due some decent walking conditions!

Fantastic photos with the sun Arising Skillinabottle. Awesome. Was hoping for the same in Glen Tilt but the sun didn't really come through. Nice report.

What more can you ask for - starry skies, beautiful sunrise, glistening pink snow and Ptarmigans in their winter coats (which I've never seen, much to the ridicule of a 'previously' good friend!!!)