After a few busy weeks and a promising weather forecast the opportunity to nip up the Cobbler sounded good. Little did I realise that his wife and the world would have the same idea!

A little later start than normal of 9.30am ensured that the roads had been gritted down the side of Loch Lomond and a chance to view a spectacular sunrise over the Crianlarich hills. We met up at the car park at Arrochar and off we set on a good track, that for the first half hour was ice free as we looked down at Loch Long and the cloud inversion. After a while the track became icier and crossing the little burns became a bit more of a challenge than in summer, but no real need for crampons, just care. Finally we hit the ascent and followed the few earlier tracks up to the south summit, having decided after reading reports about the true summit and going through the eye, that we would leave that to a fine summers day! The going was good and soft snow on ice only in a couple of places, so we were soon on our way down. By this time it was early afternoon and the jeans, no gear or rucsacs and summer shoe brigade were on their way up, some wondering why they were having problems on the ascent......... The kicked steps in soft snow having disappeared leaving the fresh snow all messed up and the previous ice on the track having melted under the footfall.

The blue skies never did materilise as promised but it was a pleasant day spent catching up with a friend, although I think I will definitely choose my day and time with more thought on my return. The Coobler in the distance 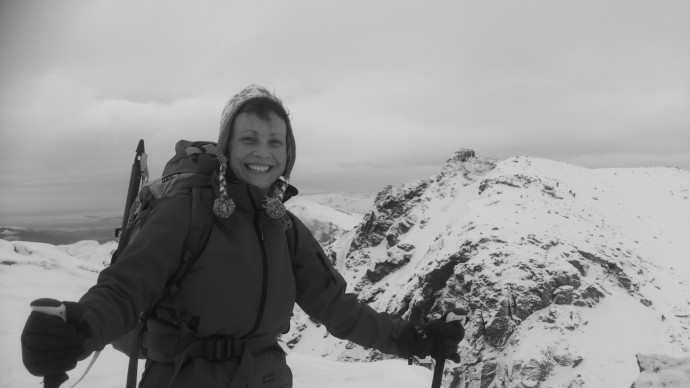 True summit waiting for another day!

Thanks Peter for the CC, will remember that for future

Great pics. Why do I never get skys like that when I'm out and about. Cobbler looks even better with some snow on it.

Nice obe Louise, good to see you finding the time to get out while over on the west side

Nice one Louise. Lucky you, i never got a morning glory haha. Great photos

Glad to see you managed to get out for a walk

Nice one and good photos too well done

That sky is gorgeous too...

Louise wrote:Thanks Peter for the CC, will remember that for future

spiderwebb wrote:good to see you finding the time to get out while over on the west side

Lol, seems like the 'dark side' the amount of rain that's been here. Turn off at Tyndrum & it rains lol

Thanks for all nice comments Nice one Louise! I saw that stunning sky too, but didn't stop to take pic - thanks for sharing

Had a similar sky on the way to meet StevieB and Scoob for our trip into the Cairngorms from Glen Feshie.

Pulled in on the A9 to take this view towards the Cairngorms before Aviemore. fipriestley wrote:Nice one Louise! I saw that stunning sky too, but didn't stop to take pic - thanks for sharing

pollyh33 wrote:
Your scenic photos are fantastic but really like the smiley face ones too

Freedom on the hills Polly, you can't beat it!

Nice photo too Spider, actually made me homesick