It was a nice cold, bright, calm winter Saturday in the Lakes. So I headed for Coniston and the most southerly mountain range in the district. Now in Cumbria, these used to be the highest hills in Lancashire.

Coniston.gpx Open full screen  NB: Walkhighlands is not responsible for the accuracy of gpx files in users posts I walked along the Walna Scar road, then began to ascend towards Goat's Water. Dow Crag soon came into view.. Just past Goat's Water, the cliffs of Dow Crag towered above.. Now the crampons went on and the ice axe came off the pack, ready to ascend Dow crag by the South Rake. This didn't look too challenging from below.. ...but hindsight's a wonderful thing.. After a tricky and exhausting scramble, I reached the ridge with a bird's eye view of Goat's Water.. A short walk followed to the summit. The Isle of man was visible.. On balance I decided to leave the crampons on, although this meant hard work in soft snow. And so on to Coniston Old Man, the highest peak of the day.. 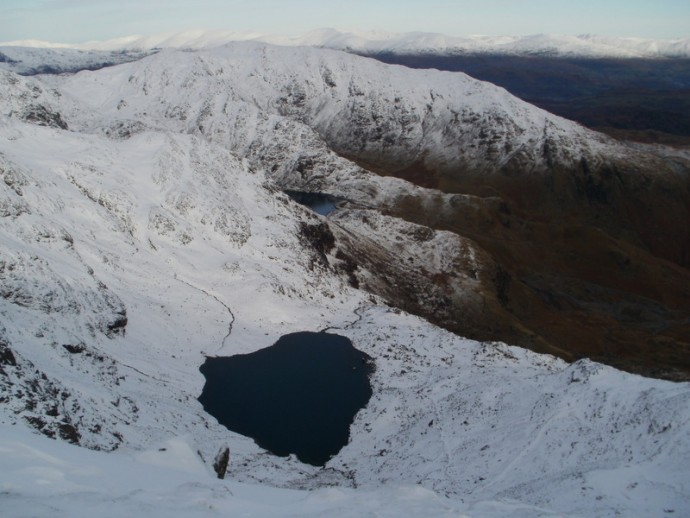 I had a break for lunch here, then walked to Brim Fell. Looking back from Brim Fell's top to the Old Man.. Moving on the ascent began to Swirl How.. This top had fine views in all directions: looking towards Little Langdale.. ...and over Great Carrs to the mighty Scafell-Bowfell range.. Next followed the descent of Prison Band towards Black Sails and Wetherlam.. Onwards to the final summit, Wetherlam, with views of the Helvellyn-Fairfield range.. By now there was little more than an hour before sunset. So I headed off down the south ridge towards Coniston.. As sun dropped behind the Old Man, I dropped below the snow line and took the crampons off. On an easier path now, I walked briskly back to Coniston. It was just tuning dark as I finished what had been a most excellent trip.

A fine report of a cracking hike Simon, you seem to have hit the conditions just right for this one with some beautiful photos along the way, bet this didn't feel like 10 miles on such a fantastic day, great stuff

A great walk any time of year but up to Dow Crag in the snow looked fantastic. Some lovely photos of those wonderful views

First time I ever did Coniston Old Man was in a foot of snow right from the Walna Scar road, where we had parked. On that day we could see the Isle of Man and Blackpool Tower

Chris, whether it felt like 10 miles or not, the South Rake scramble seemed a very long half hour. Well worth it though.

John, I might have struggled getting up there but for a winter skills course in the Cairngorms last year.
I can see Dow Crag in your Bleaberry Fell - looking south photo. What time did you take that one?

Susie, yes, you do get great views from there in winter. Blackpool Tower and Snowdonia were both visible

simon-b wrote:John, I might have struggled getting up there but for a winter skills course in the Cairngorms last year.
I can see Dow Crag in your Bleaberry Fell - looking south photo. What time did you take that one?