The one that slipped away

The one that slipped away


Having read smiffysmc's fab report (http://www.walkhighlands.co.uk/Forum/viewtopic.php?f=9&t=18116) on this walk just 6 days earlier, I knew it was a bit ambitious starting at 9am when our chief navigator (and driver!) had a strict deadline to be home by.

Power walked the 5 miles or so to get to the hill (in hindsight thinking a pair of trainers would have been better for this bit!). off tarmac but still a fair way to go

Started up the hill, managed the scramble navigating the rocks no problem, beginning to recognise scenery from Smiffy's report

There was definitely more snow this week though! up and over snow covered rocks Although not raining, the mist came down and visibility dropped. 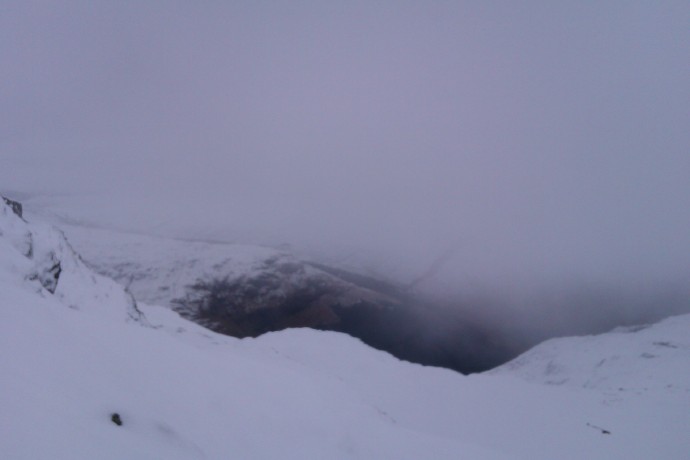 looking back as mist came in

Needed to get ice axes out and I did have to cut a few steps (aagh! still no micro spikes

) Slow progress getting up and it became harder to see.. turned to whiteout and I was relying on stepping in to the footsteps made before me. Although I'd checked out the map before this outing, I hadn't appreciated the long ridge at the top - like false summits, I think.. couldn't see much in front of me but it felt like each climb would see me at the top but instead there was a flat or a dip then another climb.

Caught up with others in the group on a flat and it was decided to call it a day as we were running out of time. One of the group had already made it up the next climb which did turn out to be the last one, and I did briefly think of running up and back to catch them up again (like I had the energy!

), but instead headed back down with the group. Means I get to try again, hopefully with views next time - can't have it all though, there was no wind at all today!

Returned the same way we went up. On the way back down I got to sit and slide in the soft snow, wheee!

Fine getting back down over the rocks, but then twice I lost my footing and had to stop myself with an ice axe arrest

This was my first time for real ie hadn't intended to go so wasn't a controlled slide, and trying to kick out steps while hanging on to the anchored axe so I could get back onto the path was a new experience

Another great day out and we just about made that deadline for getting back home!

Can't believe you did the scramble in those conditions

Thanks for posting such a smashing report.

You must have been gutted to get so close,looked a rough day.If in doubt bail out,surely you'll get a better day next time.Good on you for giving it a go

Thanks Polly! Glass half full, I'm not toooo disappointed - pleased with what I did do and enjoyed the rock scramble

pigeon wrote:If in doubt bail out,surely you'll get a better day next time.Good on you for giving it a go

Thanks Pigeon - hope so. Only slightly gutted as I wasn't in doubt that I could do it, just ran out of time!

quoman wrote:take a bike the next time for the road in/out i never done that when i did the hill last year the walk back about killed me it was pouring wi rain all day

Hi Quoman! Don't mind that bit, been power walking for years but it was tougher on my feet in boots! Shame about your weather but well done for getting this one

Unlucky Fi!!! It's a bit of a slog up there. Ha. All that extra snow probably would have had us turning back. It's the not knowing exactly what your standing on that's the problem for me. Was the steep snow ridge just before the track splits at cairn still there? I didn't enjoy that bit as its a long slide down!!! We almost turned back on the second last wee false summit. Then on the last wee stretch

Glad our report was of use. We went after seeing xpfloyds report, that's what's great about the WH forum. The more up to date reports the better

Good effort Fi. You'll enjoy it all the more when you nail it

Hard luck, Fi - I known that turn back feeling!

But you were smart not to stretch it too much! Ice, snow and all the other winter stuff (including heavy-duty boots!

) really make it hard to stick to a schedule. But here's hoping the sun will be shining and the sky will be blue for you next time!

P.S Glad the ice axe did it's stuff for you!