our_route.gpx Open full screen  NB: Walkhighlands is not responsible for the accuracy of gpx files in users posts
I had been meaning to attempt Meall Ghaordaidh for a while and wanted to combine it with the Corbett, Beinn nan Oighreag . Looking at old TRs I found a nice account of this route by Rockhopper , although I did it in reverse order for no reason whatsoever . I was parked up in Glen Lochay just after 0800 and set off on the well trodden path up towards the group of sheilings before heading NW up the long and gentle ridge which leads steadily to the summit of Meall Ghaordaidh . I was glad of the summit shelter ,by now the wind had strengthened from the SE and brought with it biting cold .I didn’t hang around long and set off , first NE then SE on a lovely hard surface to reach Cam Chreag , then onwards to pt 815 where I intended to descend into Lairig Luaidhe following a line of fenceposts marked on the 1:50k map . On towards Cam Chreag and pt815 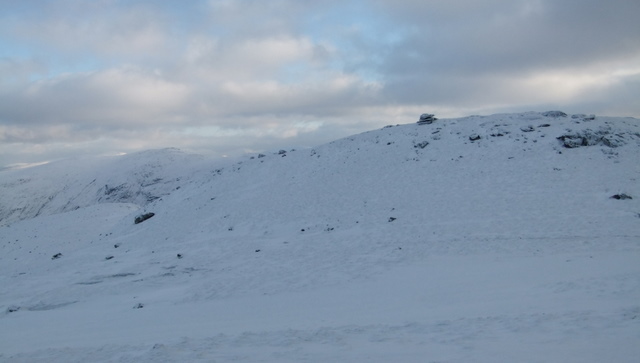 Look back at descent from Meall Ghaordaidh

I started down but soon called a halt , too steep and icy for me , so I headed NE and found much easier though rocky ground which led me down with no trouble . 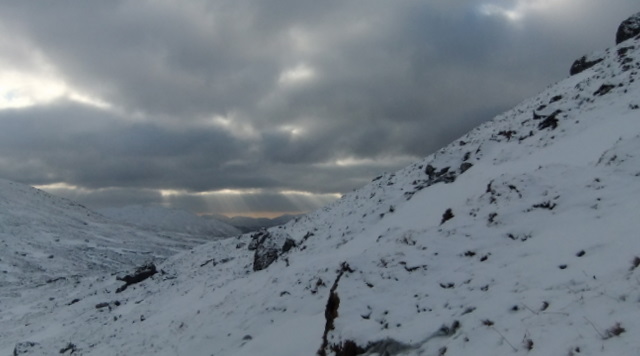 I found a nice boulder in the bealach to shelter behind and had a quick bite to eat and put on another layer , at this stage the sun was fighting a losing battle with the cloud and the wind was bitterly cold . From the bealach I headed straight up towards the long ridge of Meall nan Oighreag , roughly following the fenceline up the steep slopes , emerging onto the ridge 400m south of the summit. The summit is a great viewpoint , from the Carn Mairg group to the east to the Loch Lyon hills to the west . The 909m summit , so very nearly a Munro , is marked by a few rocks perched on a boulder , but there are two more substantial cairns on the outlying tops to the north , well worth the wander along the wide whaleback of a ridge for the views alone. MG , with Loch Lyon in the distance The descent is a nice walk , following the ridge south over Carn Shionnach, before crossing the Allt na h-Iolaire and picking up a track , this leads down to the sheilings and rejoins the outward route . Jings, that looks a cold one. A nice doubler.

I've vowed to return on a better day and add the Corbett to the route too. Loved your pictures

kevsbald wrote:Jings, that looks a cold one. A nice doubler.

It was cold indeed but the frozen bogs were a big help ,looks like it might be a wet one after a lot of rain

rockhopper wrote:Nice one Gavin - glad you could see more and got better views than I did - cheers

Thanks, your report on this came in very handy , the Corbett is a great wee hill ,smashing views

PeteR wrote:When I did Meall Ghaordaigh last year I was lucky to see the end of my nose

I've vowed to return on a better day and add the Corbett to the route too. Loved your pictures

Cheers Pete , there were all sorts of ice /rime formations on display , magic! Looks like you had a cracker there Gavin, well done.

I wish we had managed this Corbett when we did Meall Ghaordaidh. Weather was as forecast for the day, poor in the morning but turning good later in the day. So we packed in after the Munro and headed back for the car, we then headed over to The Tarmachan ridge for the afternoon as the weather was turning in our favour. What a day it turned out to be.

Great pics by the way.

Hi Dave , had a wee look at your Tarmachan TR ,you got a smashing afternoon for it , looking forward to doing it soon myself

Do you drive a red Citroen Berlingo with a walkhighlands.co.uk sticker on the back window? I saw that vehicle on 1/2/12: I parked behind it at around 9.30. I didn't see anyone on my walk (just Meall Ghaordaidh), perhaps you were out of sight on the Corbett.

Hi Richard , that was indeed my chariot , I set off at eight-ish so was a wee bit ahead of you. It turned out a fine day , little bit nippy though