With both of us scoring a mid week day off work/study, we decided an early morning walk would be an ideal way to spend part of the day, so we packed our bags and headed off from Aberdeen at 8am with the destination being Glen Tanar. We had decided to do the Haunted Stag route as we had never been into the Cairngorms in winter before, and felt the conditions were going to be ok for us. After arriving at a very chilly Glen Tanar at 845am, the car showed -5C, we were ready to go just before 9am.

We crossed the bridge, where Rick nearly took a tumble on the ice that had built up, fortunately grabbing hold of the gate and hoping the builders who are renovating the information house didn't see his graceful display of arms and legs going in all directions. The path along the farm was quite slippery too, but we stuck to the edges and made our was past the church and set off up the hill to the Knockie Viewpoint. St. Lesmo's with the farm behind it

Instead of turning right here, we carried straight on along the 4x4 track and started to gain some more height. The views were starting to become more impressive, with a mixture of green and brown trees, frozen water and snow covered hills in the distance. As we were admiring these views, from behind a hill appeared two RAF Tornados and did a low pass over the estate, much to Rick's excitement and a chance to show Kamila how quickly he can get the camera out of his pocket and snap a photo. She wasn't that impressed actually. The path after Knockie Viewpoint 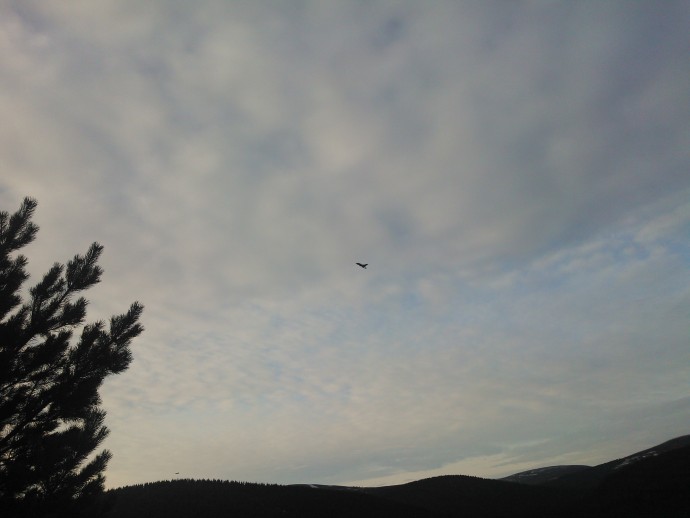 RAF Tornado!! The other one can be seen just above the pinetrees.

Ignoring all turn offs, we carried straight on and into a small wooded area. There were lots of animal footprints in the snow and we were hopeful of spotting some deer, but unfortuantely didn't see any there today. The path eventually reachs a fork and we followed it to the left by a stone marker. The track climbs again here, made a bit harder by the combination of little walking since last year and the soft snow covering ice. The climb lasts no more than 150m, but at least it warmed us up a bit more. The views were becoming more impressive, especially as we could see Lochnager in all it's glory and a snow dusted Mount Keen. Unfortunately my camera isn't that good at the moment, so I couldn't get a good photo of what we were seeing. Again, it was very wooded here and we carried along this path until we reached open moorland. There are two marker stones here that are a memorial for an event in 1877 when the Laird of Glen Tanar shot an elusive Stag at a distance of 81 metres. However, we never saw these stones as they must have blended in to the conditions. Near where the stones should be

Eventually we reached a t-junction and were greeted with the most amazing view. Morven was directly in front of us, Bennachie in the distance aswell as the Buck of Cabrach. But best of all (and I might be wrong with the mountain name, but as it had lots of tors on it, im guessing i'm correct) was a snow covered Ben Avon and of course, Lochnager. To cap it off, the two Tornado's did a low level flypast of Loch Kinord and then disappeared back to Lossiemouth. All this whilst we had a bit to eat and a cup of tea. Couldn't ask for a better moment on such a glorious day. The Howe of Cromar Could just stand all day looking at this view

We turned left and then left again after a short distance and started our descent. The views across Glen Tanar were stunning. We stuck to the path until we came to a fork where a path joins from the left and took this path back down to the Fairy Lochan path and at the bottom turned left again. We came to the Fairy Lochan and found it frozen solid. We threw a rock onto the ice and it barely made a scratch. Quite a different scenario to when we visited it in summer and saw frogs, a heron and lots of insects around it. We followed the path back to the church, over the bridge (minding the ice this time!!) and along to the carpark. It was a wonderful walk, on a beautiful day and we thoroughly enjoyed our first walk out in the hills during winter. Really nice walk Rik, well done to you both on getting out on such a nice day

I was interested to read this because Ive been to Glen Tannar recently, once in November when we tried to walk to the Fairy Lochan but gave up as the ground was so boggy. Instead we found a signposted walk which took us up to a viewpoint, may have been the Knockie one but not sure.

The Glen is just beautiful, i am looking forward to another visit

morag1 wrote:Really nice walk Rik, well done to you both on getting out on such a nice day

I was interested to read this because Ive been to Glen Tannar recently, once in November when we tried to walk to the Fairy Lochan but gave up as the ground was so boggy. Instead we found a signposted walk which took us up to a viewpoint, may have been the Knockie one but not sure.

The Glen is just beautiful, i am looking forward to another visit

The Knockie Viewpoint is basically a wooden pen at the top of the forest with two benches and a nice view. The path then drops down steeply from there.

We're planning to explore Glen Tanar a lot more this year by going off the beaten track. Its a wonderful place.

Done this walk yesterday in thick snow. It was brilliant fun. Thanks for supplying the route.

I'm up there often, but tend to head over from the Fungle side as that's where I'm currently living, so it's all very convenient.

Glentanner is a lovely area though. Carn Ferg is a fine Hill for some views.

The markers for the Haunted Stag would be hard to spot in certain light, and they are quite a bit off the track. Quite a few carved stones and monuments in the area.

The route you took is good for views over the Cairngorm area once you're above the trees. Its an area I really enjoy.