Left Gourock at 5.00am then after a short detour into Erskine
to pick up Joe headed up the A82 to Fort William and Glen Nevis.
As we got changed there was a cutting icy wind that was very uncomfortable.

We were off and walking by 8.30am, having avoided the temptation of too many layers.
A pleasant start to the walk, we were now enjoying the easy going and beautiful scenery,
first through the trees of the Nevis Gorge then on to the open valley revealing the way ahead,
with the impressive Steal Falls off to the right. 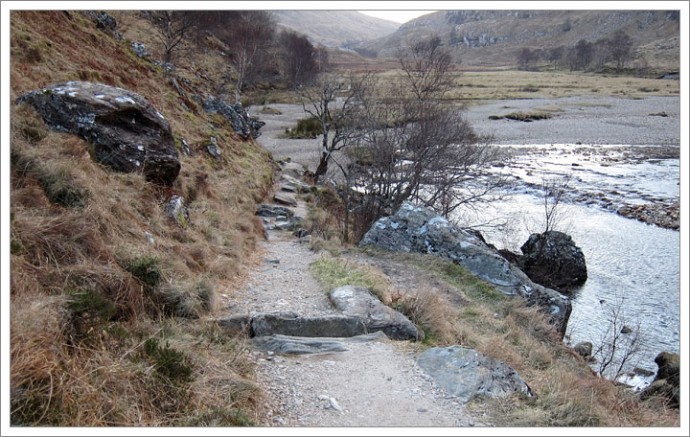 We continued along the path and eventually over the wooden footbridge but due to chatting,
enjoying the scenery and watching a lone walker gingerly cross the wire bridge
(to the Ring of Steall presumably) we went a little too far along the path before checking the map.
A quick traverse of the hill took us back to the route in about ten minutes...or was it twenty?

Now on course again the day ahead started to reveal it’s promise with excellent views northwest
up to Ben Nevis, then higher up, eventually looking west, across the CMD Arete. The Ben was
tempting our cameras out regularly by the summit’s continual interaction with it’s swirling cloud cover.
Every so often this would clear or change dramatically demanding that I stop to take yet another photo...
it was going to be one of those days. Looking south to the Mamores or northeast to the Grey Corries
it was just breathtaking in all directions. The MWIS weather forecast turned out to be accurate and the clear skies were giving us a 360 degree,
sunrise to sunset, panoramic winter wonderland. What a place to be in these conditions. The first top was Sgurr a'Bhuic then up to Stob Coire Bhealaich, every few metres turning to check
and take in the beauty and scale of the surrounding landscape. Aonach Beag is straight forward walking but at 1234 metres (7th highest Munro) you certainly work
for the rewards it offers. Next a descent to the bealach connecting it to the next summit of Aonach Mor at 1221 metres
which was now just obscured by a light cloud cover.
You can just make out 2 people on the slope...the 2 dots. We could see 4 other walkers spread out on the way up.
It was bitingly cold all day so adorned with hats, hoods and sun glasses,
courteous nods and waves were exchanged as we passed them on their way down
and continued on our own journeys.

Eventually the large summit cairn revealed itself after an easy walk up it’s broad slopes. The descent had me a little concerned after reading some reports about it’s steepness
and the snow and ice were surely going to make things tricky at best.
Fortunately the exact opposite was true and the snow made for a relatively easy descent
as we found the small cairn then picked our way carefully down among the scattered rocks.
This was made even easier as we followed the footsteps of previous walkers.
I think this could be quite demanding in wet or icy conditions. We knew early in the day that we’d be finishing in darkness and I was slightly concerned
about the boggy conditions previously reported on Walk Highlands. Again, our luck was in
and the ground was mostly hard and frozen making for an easy walk out.
However, probably due to the sheer scale of the region, it did look shorter and took longer
than we anticipated as we reached the valley floor.
Eventually the light faded completely as we followed the many footsteps through the light
snow cover, easily illuminated by our precious head torches. This was surprisingly enjoyable
as we continued in the silence of the night, broken only by the trickle of water under the ice
and sometimes the rush of the stream that paralleled our path. 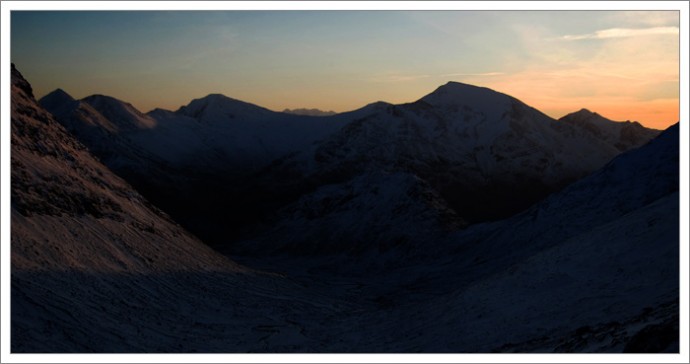 We realised after some distance that we should (according to our gps route) be on the other side
(east instead of west) of the stream. This gave us mild concern but as we were following
what was a well trodden path (sort of) we pressed on.
Eventually we arrived right at the wooden bridge so all was well. A short walk down through the valley and we were soon at the car getting changed
and heading into Fort William for a much needed and thoroughly deserved Chinese meal
before our long journey home.

Walk duration was ten and a half hours but was way longer than required and this could be shortened considerably by leaving out the many photo stops and frequent breaks just to soak up the views.
Everything considered, this rated as one of, if not the best day I’ve had on the hills to date.

Nothing too awkward or dangerous, great scenery and excellent weather.
I’d recommend this walk to anyone and hope you get as good conditions as we did.

Glad I clicked on this - a belter of a day. Great photos too

Great report and you got a great day for it.
Would love to get out on the winter hills on a day like this but every weekend where I have a free day, the weather seems to turn for the worse.

Some great views in your pictures too.

Superb photos on a fabulous day - thanks for sharing. You have to make the most of days like this! Very envious!

A great report and some brilliant photos. The views are superb all round on that trip, and you've shown how good they are in winter.

I like the sunset shot towards the end. Is that Bidean nam Bian just showing over the Mamores?

What can I say about those pictures. Totally stunning !!

those are fantastic photos, very impressive cornices up there!

Fabulous pics and great report, definitely a 'wish I'd been there!' moment.

Stunning photo's, on days like that you have got to stop to take photographs (completely free! but priceless when you look back at them! ) I bathe in your shadow!!!!!!

Stunner of a report sir! 9th pic down would be great on the photo competition!

Lucky you not having to deal with all the bog, it was horrendous when I did it.