our_route.gpx Open full screen  NB: Walkhighlands is not responsible for the accuracy of gpx files in users posts
I had tried these two hills before as part of a valiant but unsuccessful team effort on Christmas eve , turned back by strong wind and driving rain , so when an unexpected day off presented itself I decided to have another go . The forecast was good for the day and I was parked up beside the bridge at NN 278367 for 0830 . I headed east along the road for 200m to a wide gate which leads onto a rough track beside Invergaunan cottage . This track weaves its way south , beside the Allt Ghamhnain , eventually leading to a ford at NN 285357 , the crossing was easy today but in spate it might awkward . On the other side of the ford there isn’t much choice of route , the only option being to follow the river then ascend steeply between the spruce plantation and a new deer fence . Eventually the fence and forest are left behind and the strange quartz ridge comes into view . This rib of white rock slashes up the side of Beinn Udlaidh and can be seen from the road at Loch Tulla . At this point I had reached the snowline and there wasn’t much contrast between the quartz and the surrounding ground but it is still an amazing feature . I followed the line of it up to some small crags , once clear of these I was on the wide summit ridge, a lovely place with its frozen lochans and fine views . The cairn looks south towards Ben Lui and east to Ben More , a great viewpoint , but doesn’t benefit from the abandoned mast and other junk around it . From the cairn I made my down towards the col above Coire Ghamhnain , I had been a bit concerned about this descent , the map showed pretty continuous crags, but it was fine , a small rock band to negotiate lower down but nothing difficult . Heading down to the col I wandered across the col and found a suitable boulder to stop at for lunch , there had been a cold breeze at the summit but down in the shelter of the bealach it was flat calm and I sat enjoying the sun for a while . The ascent of Beinn Bhreac-liath was steady and not too steep and before long I was at the summit , a couple of small cairns scattered around the highest part of the plateau , with lovely views over Auch Gleann and Beinn Dorain. From the cairns I headed north , the ground dropping only 20m in over 1 km , the crisp snow making lovely conditions underfoot . Look back S towards summit Eventually the ground steepens and I headed NW down towards Invergaunan , by chance following the same gully we had ascended on the previous visit , though the weather couldn’t have been more different ! 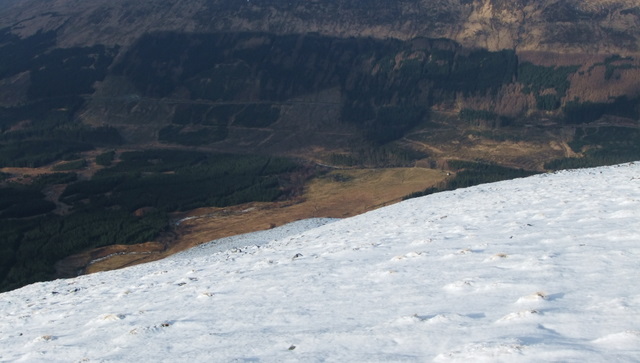 Beautiful weather , two smashing hills - a really great day , I moved back to Scotland last summer after many years away , I’ve had a few cracking days in the hills since , today was one of the finest

Enjoyed your report and some great photos of those views

Glad you had a better day than before

Cracking photo's. Really liked the one looking over to Beinn Dorain

I bet you're really chuffed with getting such a great day

Cheers folks , it really was a beautiful day , hopefully we will get a few more before spring

I'd say it looks familiar... but I'd be lying

Looks like it was well worth not getting up them last time! What a great day

Not sure when I'll get another chance at these now.

what a great day, captured beautifully in those cracking photos

LeithySuburbs wrote:I'd say it looks familiar... but I'd be lying

malky_c wrote:Looks like it was well worth not getting up them last time! What a great day

Not sure when I'll get another chance at these now.

I must admit I had a wee giggle as I strolled along the ridge in the sun , especially when I passed the point where we had been cowered down trying to use hand signals to communicate , quite a pleasant spot second time around !

Cheers Chris , not quite as nice as Wasootch Creek though

Did these two today. How I wish that a) I'd gotten half the views that Gavin got and b) that the ground was half as solid as it clearly was for him. Never in all my days in the hills have I experienced such a relentless bogfest from start to finish!

Users browsing this forum: ccairn, The English Alpinist and 123 guests