Black Mountains day 1 - into the snowstorm

Black Mountains day 1 - into the snowstorm

Looking at the weather forecast for the weekend, I almost posponed my trip to the Black Mountains. I hadn't really come up with a better way to spend the weekend though, so I changed my mind and went ahead with it. Taking a leaf out of Foggieclimber's book, I booked a space in a bunkhouse in Pantygelli just north of Abergavenny, and decided to make a weekend of it.

While the hills of Snowdonia are probably more familiar to me than the Scottish Highlands, South Wales is virtually a foreign country. Aside from a stag weekend last June, I hadn't been there in more than 10 years, and back then it was orienteering I used to visit for rather than hillwalking. My only other walk in the area (Pen y Fan and Cribyn) had been an impromptu dash on the way to an orienteering event on the Gower.

Black Mountains day 1.gpx Open full screen  NB: Walkhighlands is not responsible for the accuracy of gpx files in users posts
Having a night in a bunkhouse took the pressure off a bit, as there was a fair bit of cycling involved to get from Abergavenny railway station to the foot of the hills I wanted to climb. Cycling to Telford had allowed me to get the early train again, and I was in Abergavenny by 9:15 am. The forecast suggested that the snow might hold off until midday, but after a promising dawn, it started just as I got off the train. A couple of wrong turns later and I was heading for the Vale of Ewyas via some steep and endless hills. Cycling with a heavy rucksack was a bit of a shock to the system at first, but my new bike was much more reliable than my last one, and there was no chain jumping nonsense.

Once in the valley proper, I began to settle into the cycling, and started enjoying it. The snow had eased off and some of the hills were still cloud free. Deciding to go for the more walking/less cycling option, I locked my bike up at Llanthony Priory and started climbing Loxidge Tump by a good footpath (other option was to keep cycling to Capel y Ffin). This led first through steep fields, then onto rougher ground, where there were a few icy streaks to watch out for. 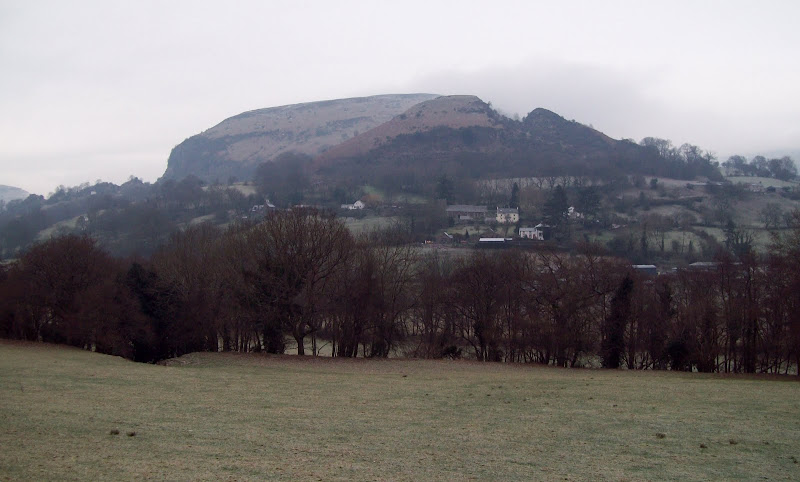 My ascent route on the left - Loxidge Tump: 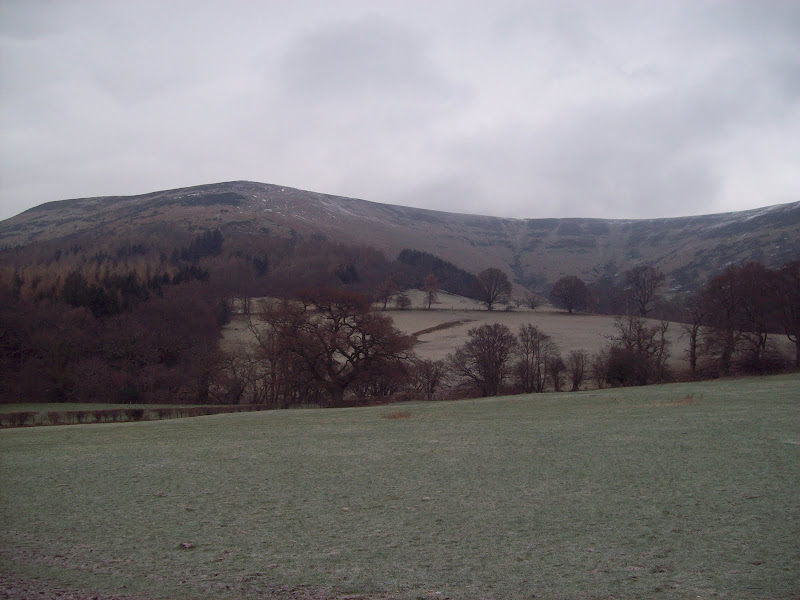 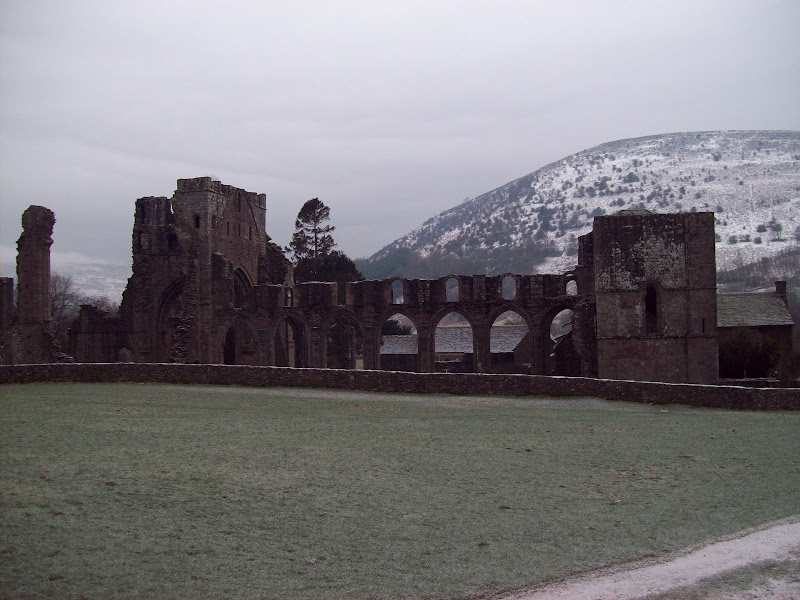 The ground soon leveled out as the snow cover became thicker, and once on the top of the ridge (which was really a narrow plateau, I was in the cloud. I joined the Offa's Dyke long distance footpath, which for the most part was well made enough to push a shopping trolley along. Although there was an occasional glimpse down onto the English side of the hill, this bit of trans-border rambling was a whole lot less interesting than I'd hoped for. I passed a group of Aussies who were heading back to Llanthony, and ploughed on. For the next 8km over Black Mountain, the going was really easy, but completely unchanging. To be fair, either side of the path was covered in thick heather and peat, and the going would have been extremely laborious without it.

Summit of Loxidge Tump - pretty much the same view for the next 8 km: 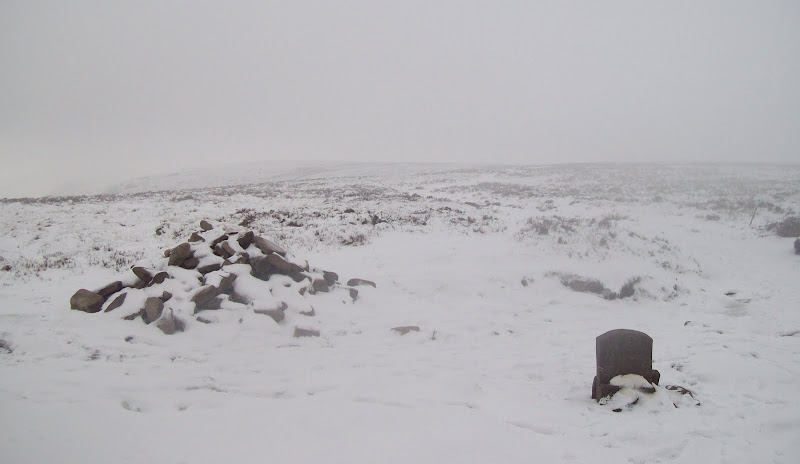 The rise up to Black Mountain was so gradual that I didn't actually know that I'd been on the summit until the path started descending the other side! The most excitement on this section of the walk was a slightly steeper descent on the other side, where I briefly sunk up to my knees in drifting snow...

The most memorable bit of Black Mountain: 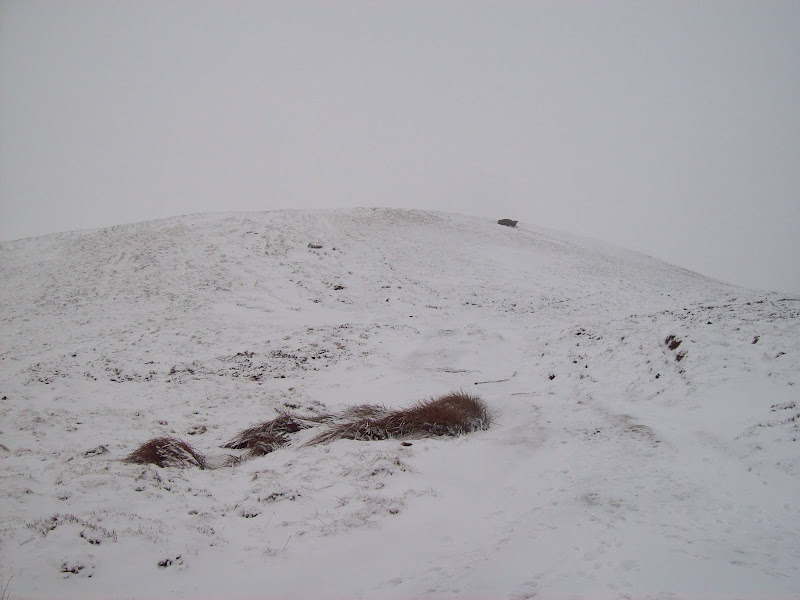 Initially, I had planned to make the detour to Black Hill, the only summit of the range completely in England, but I didn't think the views would be any more exciting from there, so I didn't bother. Instead I made for Hay Bluff, which suddenly announced itself with a trig point looming out of the mist. Here things got better and worse at the same time, with the windspeed increasing a fair bit, but also some larger clearings in the cloud. It didn't look like any decent weather was on the way, but at least I could see over the steep northern slopes of the range. There seemed to be something of a macho edge to the place names round here, with both the village of Three Cocks and the summit of Lord Hereford's Knob in the vicinity. The knob is where I was headed next, and it even appeared from the mist. I was glad of some views along this section, as I'd thought it would probably be the most scenic part of the walk.

Looking down towards Glasbury from Hay Bluff: 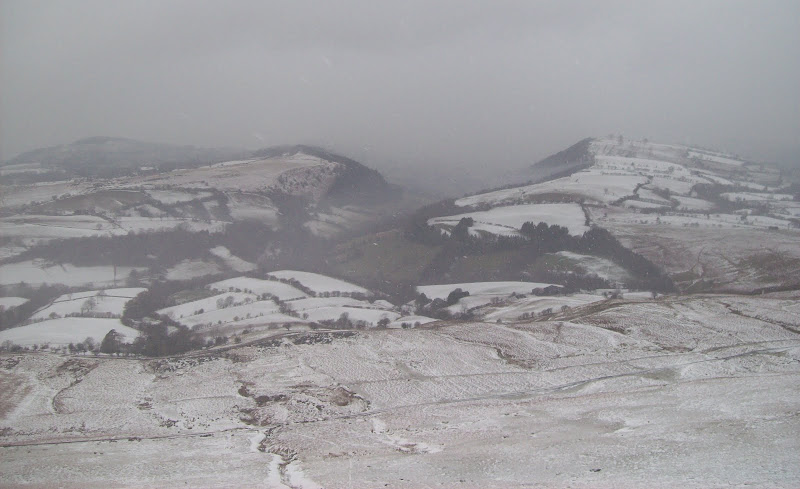 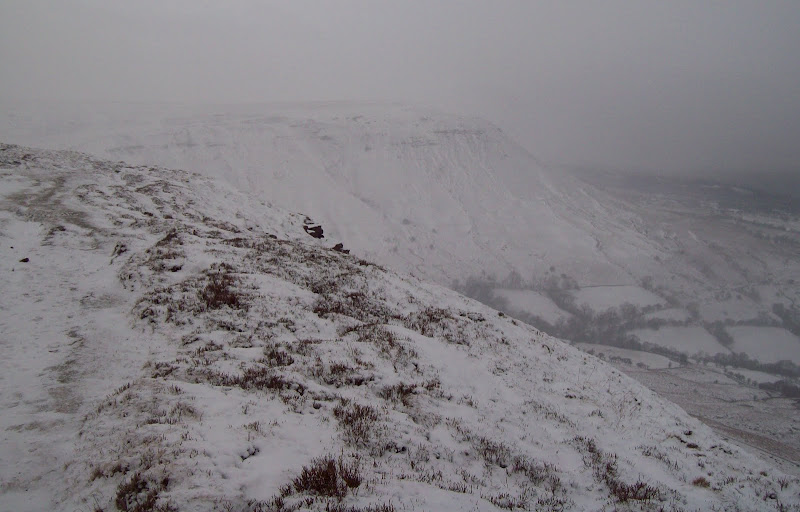 Dropping down to the Gospel Pass was easy, a descent of little more than 100m. This is the highest public road in Wales, although closely contested by Bwlch y Groes near Dinas Mawddwy, and it didn't appear to have been gritted. A couple of 4x4's were parked up an I could hear the whoops of kids sledging on the slopes opposite. I had a quick stop for lunch here, as I didn't think there would be any shelter further on. I was rather surprised to see an Audi drive past - surely up there with BMW's as the worst cars for these kind of conditions.

Top of the Gospel Pass: 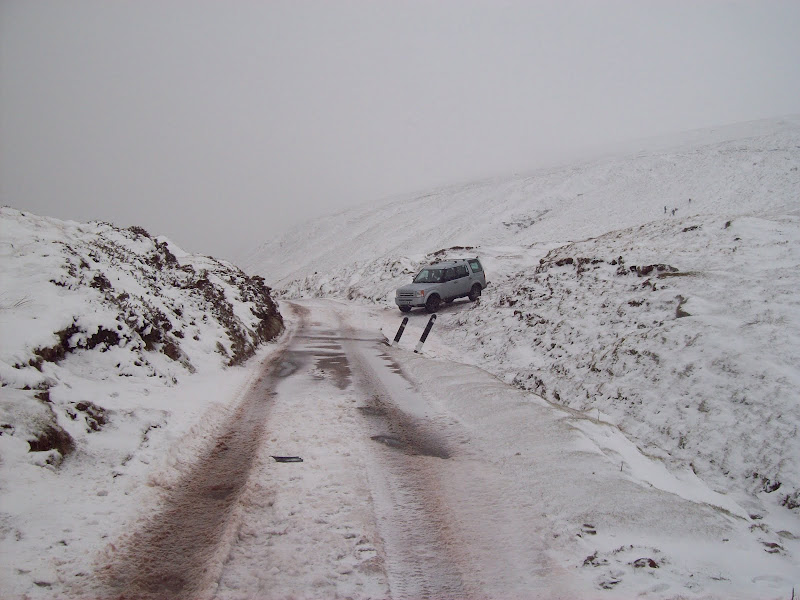 There was a good path up the knob (it even had steps) and I was on the top in no time, still with some visibility. This was the best defined summit of the day, as it was quite clear where the high point was. I continued to Rhos Dirion, which despite not even being a Hewitt (not enough ascent between it and Waun Fach, miles away), was my highest point of the day, and probably the most imposing looking hill (which isn't saying much).

Looking back to Hay Bluff from Lord Hereford's Knob: 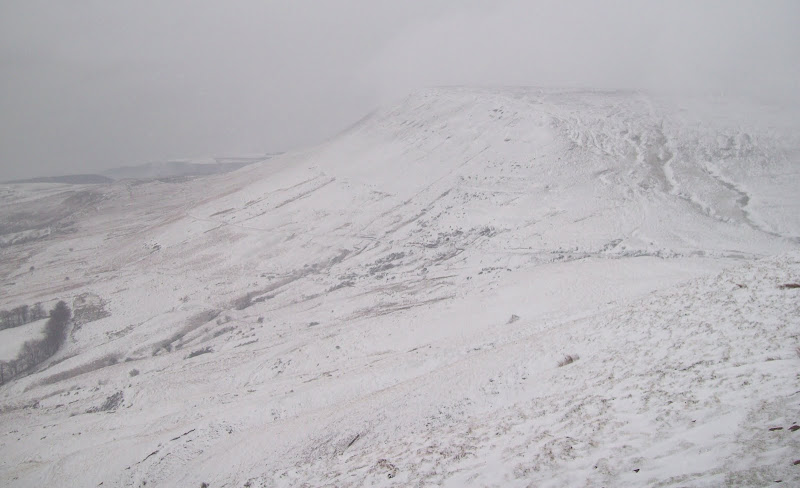 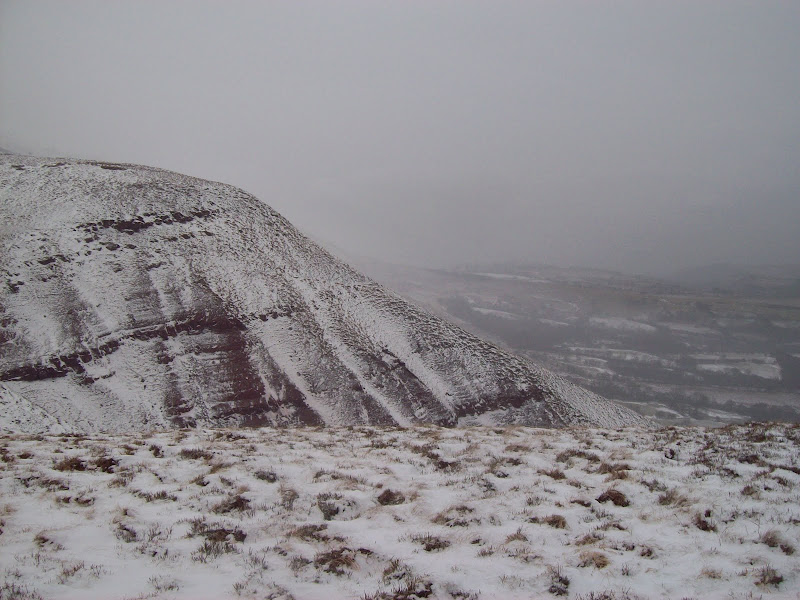 At the trig point on Rhos Dirion, I was in the cloud again, and the wind had increased another notch. I took a bearing on the SE ridge and started walking. This is where the day gradually went from easy to tedious. Gone was the good path of Offa's Dyke, replaced by a peaty trench in the heather. While I was lucky enough for the peat to be frozen, the snow had drifted over the path, making it mostly an ankle deep wade, with occasional flounders up to my knees. The wind was whipping snow onto my right cheek which became tediously stingy after a while. This would all have been fine if there had been some variation, but there were no views, barely any up and down, and I was on the same bearing for over 6 km!

At one point I passed a group of a dozen or so people, who all had heavy backpacks with camping gear. I was glad I was going faster than them, but once out of site it was back to the monotony again. The rise to Chwarel y Fan was so gradual that I barely knew it had started, and once noticed, seemed to go on forever. Higher up there were actually some narrowish (by Black Mountains standards) sections of ridge and bare rock to enliven things, but the top never seemed to appear. In fact I'm still not sure which bit was the top - I just kept going until I was quite clearly going downhill again.

The original intention was to stick to the ridge until the summit of Bal-mawr, but my right cheek had quite enough of the spindrift and I wanted some kind of variation, so I dropped off the ridge to the left. About 10 minutes of wading through the most luxuriant growth of heather I have ever come across followed, until I was on a path again, and out of the cloud. I used the path to descend to Sychtre Farm, and gladly followed the road for the last 2km down the valley. In my time on the hill, the road had become completely covered in snow, and the few cars which had passed had compressed it to an icy sheen - not a good place to be driving! 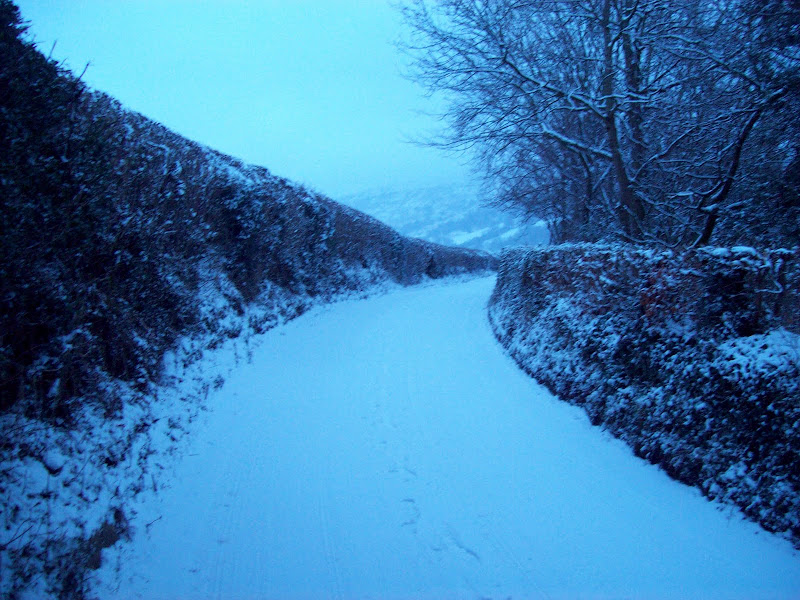 As I walked back down the road I thought about my first taste of the Black Mountains - They had initially seemed dull and too easy going, then frustrating, then much tougher going than I had expected. I hoped that tomorrow's weather was going to be better, as I wanted to get some idea of the landscape I had spent all day in.

Back at the Priory, I still had 10 miles of cycling to do before I could rest properly. Darkness was falling, and I was concerned that the road would be snowed up all the way back. As it turned out, it had been gritted as far as Llanthony, so the going was not too bad. Slushy at first, then almost completely clear. I had almost forgotten about the snow at Pantygelli, when I turned off down the drive to the bunkhouse. This hadn't been gritted and was still covered in snow, and I almost went arse over tit!

The bunkhouse (Smithy's Bunkhouse) was well provisioned, and although the dormitory was freezing at first, the owner soon found a heater. A group of mountain bikers were also staying (one of whom did manage to slip and crash on the way down the drive), and I had planned on joining them in the pub at the top of the drive for a pint. However after 5 minutes of reading in my bunk, I was fast asleep before 9pm.

Cracking stuff as always Malky, hard conditions at times and hell of a distance

Great report Malky, had to reminisce a bit as i used to work in Abergavenny and the black mountains were my old stomping ground! You are spot on about the terrain being deceptive and a shame the viz wasnt a bit better as the views can be superb!

Remember doing a similar loop starting at Capel y Ffin last year, would agree the northern end of the walk is much more pleasant than the other end. Good to see what these hills look like with a bit of snow.

Glad the new bike is to your liking.

The long (ish) walkouts are crap if not getting any views or stimulation.

. Shame I couldn't think of any decent knob gags when I was writing it up...

You weren't in the area were you Gammy? Something was definitely affecting the weather