Plenty of tries in this part of Scotland!

Plenty of tries in this part of Scotland!


Thought this was a fitting title for the day of the rugby clash!

Forecast was better for the following day but a wee bit of wind and rain wasn't going to put me off! The wind really wasn't bad on this trip - all relative though, been much worse in recent weeks. However the rain was constant all day long and I discovered that even in goretex from head to toe I wasn't completely protected from being soaked to the skin

Nice walk through the forest then up a good path that soon turned to sheets of ice. Starting the ascent on Meall na Teanga there was no visible path to follow but looking back across to Sron a'Choire Ghairbh there was a more gentle zig-zag path to look forward to for the second hill of the day. 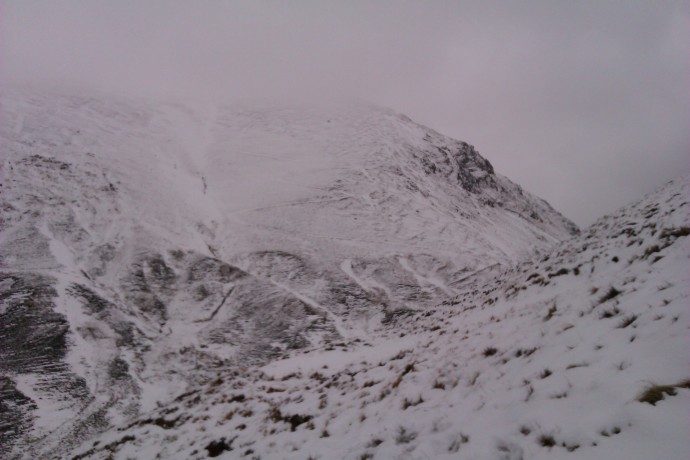 still fairly clear between the hills Meall na Teanga - looking towards the slope I climbed many times!

Walked up and over to approach Teanga's summit from the left but as we got higher the soft snow and steep ground became too difficult to get a grip in. So we headed across the hill to make the climb more from the centre of the ridge up. Both my fellow walkers were making slow but steady progress so I was managing to keep up with them for a change! ... until my first slide down

Had my ice axe ready so all was OK, just difficult to make it grip with the thick layer of soft snow on top of the ice/hard snow.

Not to worry, I could still see my colleagues up ahead so I just carried on making the climb back up again... until the next slide down

I lost count of how many times I tried climbing this part of the hill, but remember thinking the hill was just toying with me playing snakes and ladders. After what felt like the tenth time of sliding down, the sheer frustration (as in

'aaarrgghh!!'/expletives/thumping fists in to the near vertical slope in front of me!) was getting to the stage where I wondered at what point do I admit defeat and accept I'm just not going to get there today

Seeing a colleague checking back on me spurred me on to try again though... didn't stop me sliding down a few more times but each time I tried the climb I got a little further up, eventually reaching their tracks so I could get a better foothold.

Finally, once past this part of the slope there was just a short, much flatter, stretch to the summit. The YEEEEEHA elation of reaching this one was all the sweeter after my efforts in getting there!

Forgot all about the wee bump on the head as I'd swung the ice axe round to try and grip with the handle as the top layer of snow was too soft to get a grip otherwise (so crampons wouldn't have helped).. now it's 2 days later I've got a cracking bruise on my knee though!

Didn't stop for long at the summit as it was still raining and no views up there this time. Came back down no problem - I love the down slides! just not when I was still trying to get up to the top first

Stopped for a bite of lunch between the hills and the physical exhaustion I was starting to feel on the 'hundredth' attempt at that climb soon eased away. Although soaked through by now I was still warm and comfy enough, so on to the second hill

In comparison, this one was a walk in the park - followed the path which was pretty boggy and slippy in parts, then up on to the short ridge to reach the summit of Sron a'Choire Ghairbh. Didn't attempt to get the camera out again as the rain continued and my gloves were soaked through. Nice to be rewarded with 2 tops after all my efforts!

Tenacity thats the name of the game!!!

As the bruising..... you'll just need to put your swimwear photoshoot on hold for another wee while

quoman wrote:Nice one again fi you sure like your slides are you one your third or fourth pair of waterproof trousers yet

Still on my first pair... just have lots of patches now

Finally found a repair that works on my padded trousers with goretex outer layer and built-in gaiters - Evo Stick Extreme glue (water proof and can stand up to -35degrees!) and rubber patches from a bike repair kit!

Tenacity thats the name of the game!!!

As the bruising..... you'll just need to put your swimwear photoshoot on hold for another wee while

Thanks Polly, so glad I stuck at it

Think that photoshoot could be on hold indefinitely

Aw thanks Stuart - try to get a balance of informing others, inviting advice/tips and keeping my own memoires. Great when I get enough pics to tell the story without too many words