20120129.gpx Open full screen  NB: Walkhighlands is not responsible for the accuracy of gpx files in users posts

Sadly it was a case of last and least. The MWIS couldn't really made up their mind as to what sort of day it would be. The Saturday was forecast to be the better day of the weekend but I had family commitments. So it was the Sunday. With anywhere between 20 to 70% chance of a cloud free Munro. Having done Sgor Gaoith via Loch Einich this was my first visit to Glen Feshie. Was on my way at a minute to eight after a steady two & half hour drive. The prospects didn't look to great, with heavy clouds and no tops visible.

The SMC Munro book suggests cutting SE halfway between the two Allts (Fhearnagan & Garbhlach) and there is a wee cairn and faint path there. However I opted for the route suggested by this site as its a good deal less steep so I continued south till near Carnachuin. As expected there wasn't a problem crossing the Allt Garbhlach.

But the track up from Carnachuin makes for a fairly boring ascent when all it does is take you into the clag. Snow from about 500m along with increasing wind. Took a diversion to the intermediate top of Meall nan Sleac in the hope of some decent views as this was just below the clag. Pretty windy but I got a half decent view of Coire Garbhlach.

This Way To The Clag
670m on the track up to Mullach Clach a Bhlair.

Don't Be Fooled By The Blue Sky
View the other way.

Then up into the clag. The gusty wind was kicking up quite a bit of spindrift by now so it was on with the goggles. Aware that the summit cairn didn't offer anything in the way of shelter I just sat down on the track around the 900m mark to have my elevenses. Onto the plateau and it was a near white-out. However the snow wasn't deep and there were lots of footprints from the day before to follow. A quick photo and out with my handy anemometer. 40mph with -3°C, giving a wind chill of -13°C. So I was quickly on my way. But which way? I did think of just returning the way I'd come. The easiest option but as this was the first time I'd come this way I thought it would be a shame not to see more of Glen Feshie. I'd only have to descent 100m to 200m to get out of the cloud and the weather could well improve. So with my ViewRanger phone in hand it was off in a SW direction. In the end it was only half a k of clag & less than 100m lower to get out of the cloud. There were now decent views S & E with the scudding cloud making things even more dramatic. The southerly wind blasting up the gentle ridge of Druim nam Bò was even stronger that on the summit. 45mph now (with max of 47) giving -14°C. But below 800m things were a lot better.

Well Wrapped
Rather pathetic summit cairn of Mullach Clach a Bhlair behind.


On past the frozen Lochan nam Bò to Creag na Gaibhre, with its well kempt cairn (& putting Mullach Clach a'Bhlair one to shame). A shame the same can't be said of the path from here. The walk description says it is a "well-engineered old path, somewhat overgrown". The "somewhat" is sadly a bit of an understatement. I lost and found the path several times in the thick heather. In the woods I got sick of following it having slipped up twice and instead headed straight down the hillside. No easier but shorter. Had time for to visit the remains of the bridge at Carnachuin. The last hour was the usual weary trudge.

North West Over Glen Feshie
Glen Feshie from a bit below the Druim nam Bò bit of Mullach Clach a Bhlair.

Slochds Mòr & Beag
Slochd Mòr & Slochd Beag being the small steep valleys disappearing into Glen Feshie, the latter running from left to right in this photo. Slochd is from "sloc", which is Gaelic for pit or hollow. The most famous slochd is of course the highest point on the A9. The Corbett of Carn Dearg Mor on the extreme right. Meall Chuaich is probably the hill catching the sunlight in the distance.

South Over Glen Feshie
View south(ish) over Glen Feshie from near Creag na Gaibhre (on the south west descent of Mullach Clach a Bhlair).

Across Glen Feshie To Slochd Mòr #1

Across Glen Feshie To Slochd Mòr #2

Bridge No More
The remains of the Carnachuin bridge which was swept away on 3rd September 2009. There were plans to replace it in 2010 but apparently there have been planning holdups. Hopefully they'll get round to it this summer.


So a mixed day. This was only the second Cairngorm where I hadn't got a summit view, the other being Ben Avon. I plan to return to the latter at some point but I don't think I'll be bothering with Mullach Clach a'Bhlair again. But the trip back down to Glen Feshie was excellent (apart from the non-path) and I'll be back to Glen Feshie, probably on my MTB.

Looks a cold day for it. Not much wind getting through that summit photo though apart from your nose. Did you go home looking like Rudolph?

And well done for completing the Cairngorms! It must have been cold up there

I've always wondered why the hell this one is a Munro, hardly a distinctive feature on the plateau. I remember walking across from Sgor Gaoith and feeling disappointed when we reached the summit cairn. The best views from the top are, I think, towards Cairn Toul: 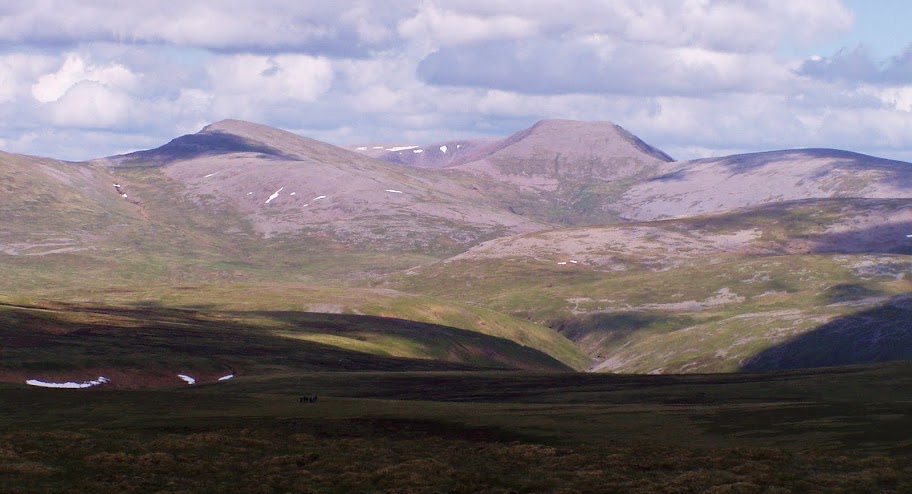 Yes, rate of progress is going to slow up now...

Johnny Corbett wrote:Looks a cold day for it. Not much wind getting through that summit photo though apart from your nose. Did you go home looking like Rudolph?

Thankfully not - kit did its job and I wasn't in the firing line too long. I did take a glove off at one point to fiddle with my camera but 30 seconds gloveless was enough!

Good report there Alastair
Qyality photo's,yeh the wind dosn't show in the pic's but it looks cauld well done on doing all the cairngorms

Looks a cold one,some great pictures though,well done on finishing the gorms,what's next on the hitlist

Thanks all - and thanks for the picture of the view I missed BP. Your comment about why this even qualifies as a Munro got me thinking too so I've spun it out in another thread: Lowest drop between Munros.

Well done on completing the Cairngorms - no small achievement

Quality stuff as usual - just get that book written.

Another cracker Alastair, it may not have been 'best till last' scenario and perhaps the weather didn't help you much either but you still pulled out some stunning pics and completed the Gorms...great stuff

Another great report Alastair, fantastic photos, and well done on completing the gorms

There are still a few more to do within 2 to 2.5 hours drive. I also get away with my walking club for the western & northern hills. But there are still lots of other Cairngorm hills of various categories to keep me going back to the 'gorms.

And then there's the task of getting up all of the 'gorms for dawn...

Not sure if I'm kidding? Well neither am I!

Well done on completing the Cairngorms! It may not have been the most inspiring of Munros but you made the most of it! Great pictures from below the clag!