When you have a lovely home with a loving wife who cooks great food, why would you go away with a hairy bloke who doesn’t cook, drink or wear his glasses to navigate?
Dave (Snowdonia7) has written a plenty about our Munro bagging trips. Our recent trip over the long week end of 2nd to 5th Feb gave us a great mix of weather to make them even more of a challenge.
When the weather report for Saturday the 4th Feb was put up in the hostel I just knew I should have brought my diving dry-suit. This was to be our second attempt to scale Meall Glass and Sgaith Chuil in a clockwise loop. The previous attempt on Thursday was thwarted by stalkers (of deer, not demented women intent on ……). The large traffic light boards outside Crianlarich warned of severe snowfall. At that height it was a steady rain, but there was no view of the hills over 450mtrs.
The walk-in from the car at Auchessan was a contemplative one: how bad was the weather up there; how tired am I after 2 days of walking; how waterproof are those Trespass trousers Dave and do you have over trousers? – ‘yeh, they’re good and no.’ The steady 2 km walk north of the farm quickly took us from rain-to-sleet-to-snow. Heading NW took us to the saddle between Beinn nan Imrean and Meall Glas Bheag. Another layer, a bite to eat and a brew prepared us for the steep climb around Bheag and on to the south slope of Meall Glass. Kicking in was the order of the day again as the steepness increased but thankfully the now gale force winds drowned out Dave bleating on about his dodgy ankle again.
The rather miserable ice encrusted cairn atop Meall Glass only added to the confusion of whether we had topped-out proper when the GPS showed our altitude as being much higher! The significant change in weather pressure in the last 24 hours threw the technology out and mother-nature toyed with our senses by depriving us of any visual reference in the whiteout conditions. A swig of Baileys from the ‘Bagged-it hip-flask’ (ran out of whiskey) confirmed we were where we should be and we headed east.
Avoiding the 908 mtr high point we quickly descended then ascended for Beinn Cheathaich, an almost-Munro which stood in our way to Sgaith Chuil. By now crampons, mitts and ski goggles were on. Thankfully the packs took the brunt of the pummelling as the blizzard winds thrashed at our backs, pushing us up and onwards.
The trig point on Cheathaich offered us scant protection before we quickly moved on to go east and lose some of the height and wind speed. And that was our mistake. Both of us had read route guides for the next section – North 100 meters before turning East – it said. Did either of us remember that fact? Did it jump out at us from the map? Did it chuff. For what seemed like an eternity Dave and I probed Cheathaich’s defensive eastern walls from above. Looking tentatively down what appeared to be sheer, bottomless cliffs into a snowy oblivion that wasn’t my idea of a fun Saturday. I could have been in the warm pub shouting at the rugby on TV, with me mates and an over priced pint of Facer’s Landslide ale. At that point I wouldn’t have minded losing a filling to a bloody pork scratching.
I’m not sure who swallowed their pride first and suggested we sack it…but it was probably me. I was naturally more concerned for Dave’s health and safety in his silly Trespass sponge pants so I pointed to go back up the 200+ meters we had dropped to get back to the trig. Me trying to not look scared a top Beinn Cheathaich.

I’m sure he was out of breath at the time ‘cos Dave didn’t argue when I pointed south west to get the heck off Cheathaich and retrace our steps to the plateau above Meall Glas Bheag and safety.
In loosing height the wind speed decreased and consequently if felt like the temperature went up as the chill factor factored in.
By now the sheers volume of dinner plate sized snowflakes were causing the visibility problem. Goggles needed constant wiping and the map had to be held at an angle less it formed a snowy A4 relief of the area.
For a while I put Dave’s lack of contribution to locating our location down to: a) low sugar levels b) altitude sickness c) early onset of hypothermia. It was actually that his single thickness lens goggles were constantly steamed up. Can huskies trained to be guide dogs? 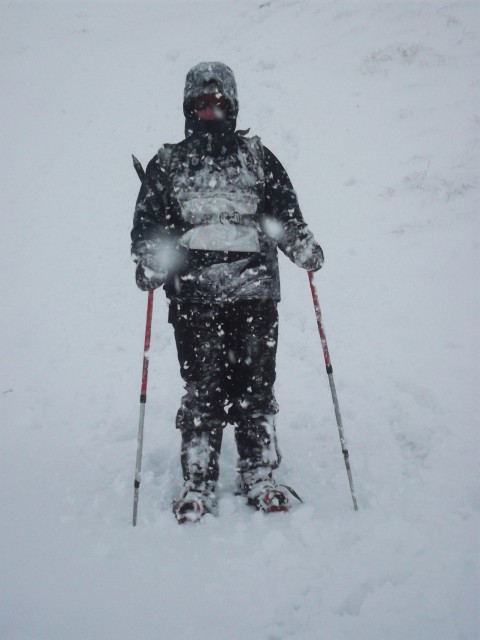 The snowman cometh. Dave on autopilot.

We actually picked up what was remaining of our in-bound footprints to lead us back out of the snowline and into stair-rod rain and back to the sanctuary of the car. The ground remained frozen solid all the way to the track.
The bravado and BS talk from the pair of us in the front of the car warmed the vehicle up faster that any heater. Six and a half hours for one Munro……was it worth it………..of course.
Sgaith Chuil will still be there for next time; plus Wales won their rugby match the next day and I did watch it, shouting at the TV, in a pub, with my favourite pint. Life is good.

Good report and i like the last pic of Dave covered in the white stuff.
wee had the same problem last month only managed Sgaith Chuil from Kenknock farm

Yes, it was your call to turn back - and the right call too - there was a nasty fall waiting to happen in the grags on the eastern flank. It would be interesting to see whether that route would look any better on a bright sunny day.

P.S. I'm not sure if I mentioned it, but I had an ankle injury last weekend

What a fun read, liked that i did.

Hope the next rugger match wipes the smile off that fizzog of yours.