To The Brack and beyond

To The Brack and beyond


We started the walk from Ardgartan following the track to Coilessan Glen from where we made our way up to The Brack. This was without doubt the hardest hill i have did to date navigation wise. The weather was poor with virtually no visibility, although not cold with a little drizzle. Once on the ridge we realised it was not going to be easy to get to the summit as it's no straighforward ridge with a few humps to negotiate. At this point Kim was quite rightly concerned, although i was quietly confident we were heading in the right direction as i checked the compass.We carried on and eventually reached the summit. Once at the summit we decided to try retrace our steps backdown, not an easy task as we were to find out. In hindsight we should have headed down north east from the summit. Anyway we took a baring from the summit and headed down, it was here i made the error of not continuely checking the compass. We were both convinced we were heading the right way and as we were going downwards we continued. Once down we got to a track, a track i didn't recognise on the map and as we were unsure as to where we were at this point we had no choice but to follow the track down. Once lower down we could see a town, Kim asked if it was Arrochar and i replied "i don't think so". It was then i knew we had came down the wrong side of the hill. Once at the road i flagged down a passing car to ask our exact location and was informed by three lovely Glasgow ladies that the town was Lochgoilhead. I informed them of our situation and thanked them for their help. We now had a choice to make, hitch it back along the B839 or head to Lochgoilhead and take the walk through the Glen. We decided to hitch and within a few minutes a car stopped, the car with the Glasgow ladies offering us a lift Back to Ardgarten. We could not thank them enough as they had just driven up the road on their way to Lochgoilhead. We were back at the car just after 5pm and were so grateful for their kindness, a big thankyou again to them once again

I made errors on this walk, the biggest one on the way down by not checking the compass which i will learn from. The one thing i'm glad i did do was flag down that car as it was a long long walk back. Where the track splits Poor visibility on way up 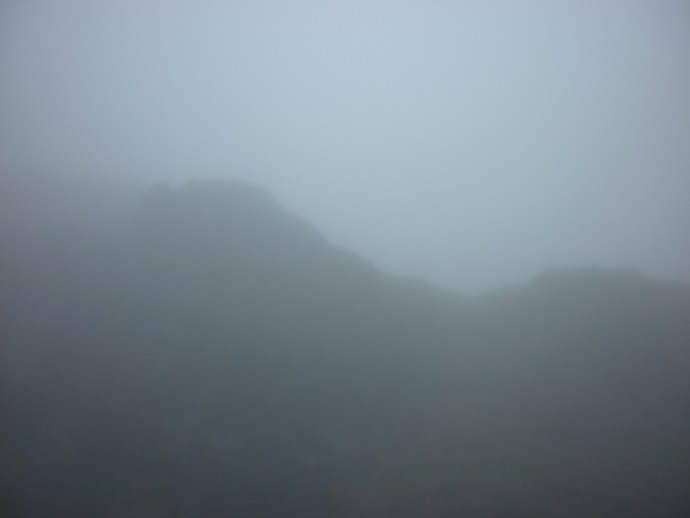 Kim on way up That was some detour, had a look on the map bloody hell you would have some walk back if it wasnt for the lift back.

quoman wrote:That was some detour, had a look on the map bloody hell you would have some walk back if it wasnt for the lift back.

Yeah we can't believe how lucky we were

As well as being grateful for a lift back, I would just have been grateful to seeing some kind of civilisation after going a wee bit awry with the navigation!!!!

Good to see Kim out and about, at least I think it was KIm!!!

Dhia you have my sympathies a bhalaich

no harm done and im trying not to

.... at the thought of the ear bashing your good lady may have given you

That was some walk and that ridge is a tricky one in poor vis.Good move getting the lift back

Thanks all. Civilisation saved me from the ear bashing even though it was at least a 10 mile road walk back to the car

. Kim was just so relieved to get off that hill that day as it was the most uncomfortable walk she's ever done. We can laugh about it due to the fact we got lucky and as i put it to KIm, at least we made the summit which is the main thing

like you say mate....at least you made the summit

I made the same mistake and ended up having to phone the missus to come pick my mate and I up from the hotel in the goil!