A broken compass on Fairfield...

A broken compass on Fairfield...


Following a two week period where I was unable to get out in the Lakes due to other commitments – Wedding Preparation weekend and visiting the in-laws – I was itching to get back on the fells... especially when those two weeks had seen heavy snow followed by glorious sunshine and blue skies. I had my heart set on a winter round of Fairfield, a walk I have wanted to do for some time. And then I saw the forecast – 20% chance of cloud free summits, 40mph winds, risks of snow and white-outs. Excellent...

Nevertheless I decided I would go for it and head out very early with the worst of the weather forecast for later in the day. Todd was going to sit this one out though with the forecast – he doesn’t like the wind so he had a nice morning on the sofa

I arrived at Ambleside/Rydal in good time, getting there for just before 7 and decided to walk straight away, knowing the route was easy to navigate by head torch and also knowing the weather was due to worsen.

After about 30 minutes en-route up Nab Scar I turned East to what looked a very promising sun rise! The clouds were nice and high at this point. But the heavy cloud cover worked in my favour, creating a beautiful sky as I got higher looking back over Wansfell. Looking to the West and the Coniston fells it looked grim though, this is what was supposed to be heading my way later in the day! By this point I was wanting to push on to the summit of Nab Scar as I could see the sun beginning to break through and create awesome colours on the fells and clouds. After a quick stop on the summit of Nab Scar to take in the view, I carried on to the next stop, Heron Pike... Looking across the horseshoe the clouds were clinging to the fells. Getting onto the ridge of Heron Pike I got my first glimpse of the top end of the horseshoe and it looked like I would get my wish of the full winter round!

Looking back the other way to Windermere – a nice sun rise in the East and looking like the end of the world in the West. Not long from this point to the summit of Wainwright number 2 for the day – Heron Pike. I was making good time to here and was pleased to see Fairfield (notoriously tricky to navigate) and Great Rigg both out of the cloud still! It was a little mirky still, but caught a glimpse of Striding Edge whilst on the way to Great Rigg. It was cold at this point with the wind picking up, about 30mph and -10 degrees C in the wind. Quickly passing Great Rigg and powering onto Fairfield I just about reached the summit before the clouds came in for the day. It was fairly bizarre that whilst Fairfield was out of cloud, all the surrounding fells such as St Sunday Crag were in cloud! Didn’t hang around for long on Fairfield and you will see why soon, just enough time for some chocolate and putting the Primaloft on and a couple of photos. This is a fairly scary looking cornice over Cofa Pike. And this is Fairfield summit... And this is a nice frozen patch on the summit shelter. This is where I have to admit to a minor disaster just as the clouds came down... putting my camera back in the bag I stood up and heard a crunch. I had inadvertently tested which is stronger, crampon or compass and unfortunately the crampon had won. I had put my crampon through the side pocket of my bag and through the compass. Brand new Silva compass spread into a thousand pieces on top of Fairfield, doh... So this meant I was down to GPS for the day! I have often wondered why people carry 2 compasses, I guess this is what is meant by learning the hard way! Leaving the summit of Fairfield and following the row of cairns the next target was a down and up to Hart Crag. Fairly easy going though in crampons with the snow pack nice and solid. Quickly getting to Hart Crag I could look back to the cliffs of Fairfield. And as you can see, this is where the clouds properly descended and all views from now on were pea soup  I am not sure if this is the summit of Dove Crag or Hart Crag... lol. This shows how deep the snow is against a dry stone wall. I thought it looked quite cool that with the sky the wall appeared to be floating. By now it was snowing quite heavily and I was beginning to get a bit concerned about the conditions back at the car where I was parked on a steep hill!!! Next stop, having passed a few groups who were doing the reverse route was High Pike. Not much to see still – felt sorry for all the people just starting out who would have had no views at all, at least I was lucky this morning! And finally Low Pike, where it was still snowing... 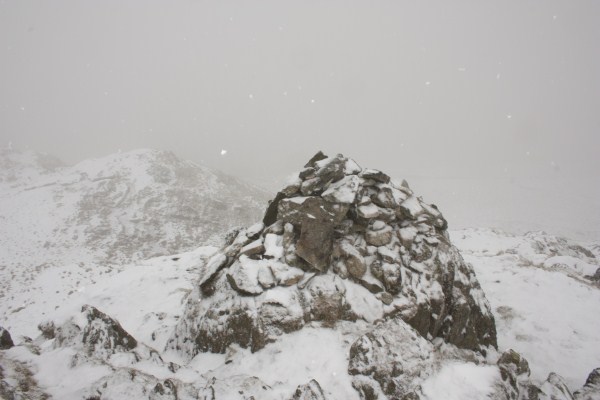 On the way down it was difficult not to notice that the snow was much lower than it was first thing this morning! Almost back at the car I stopped off for this chocolate log snap... And that was that, all the excitement done for another day... well I had to negotiate the road out of Rydal Hall, which was now under a couple of inches of snow... this ended up being very much sideways, narrowly avoiding cars parked on both sides and having to scream at a lady to get out of the road because I couldn’t stop.

A quick stop in Ambleside and £25 later I had replaced my compass and that was me done for the weekend, hoping for the return of blue skies the next week!

I did this route today in the fog, thanks for showing what it looks like!

The Fairfield Horseshoe is my favourite walk

That's a fair old lump for a winter wander CP, you were rewarded with some lovely photos for your efforts though

Not sure about the temperature, with that damp clammy air over there that is damn cold

Nice report. Will be doing this in the summer when hopefully it will be somewhat warmer.