The Great Wall of Rannoch in a day

The Great Wall of Rannoch in a day


My friend and I have recently deemed that in June, we are going to make an attempt at the 10-munro Mamores circuit in a single day. In preparation for this 34km 3,400m ascent epic, we decided to test our readiness by traversing the entire Wall of Rannoch, stretching in an imposing arc from Beinn a' Chrechain in the North to Beinn Dorain above Bridge of Orchy.

Setting off on the early Citylink 916 Uig service, the co-operative coach driver agreed to set us down on the A82 at the Bridge over the inlet to Loch Tulla; heading up the track just before 9am at a furious pace we then carefully crossed the Water of Tulla just after the long, narrow island in the middle of the river. This crossing would be treacherous in spate but it posed few problems with a low river level.

Meeting the path and heading over the railway bridge and beyond, we commenced the arduous plod initially through birch woods and later, unrelenting steep grassy slopes in mist and high humidity, to make the crest of the ridge north of top Meall Buidge a little over 2 hours after setting off. A cold westerly breeze was already materialising, and we set off to the summit of Beinn a' Chreachain which was attained a shade after noon, in about 20 mins from the 924m bealach. Despite no forecast wind, the breeze was picking up and it was cold enough to require 3 upper-body layers by this point.

Clagged in for the main part, we nonetheless had occasional, tantilisating glimpses of the view over wild Rannoch Moor to the west and north-west.

The first and as it turned out most technical difficulty of the day lay ahead in the initial steep snow slopes on the eastern ridge of Beinn Achaladair, with two couples picking their way carefully down; crampons on at this point and they were to remain on until the last hour of the day. 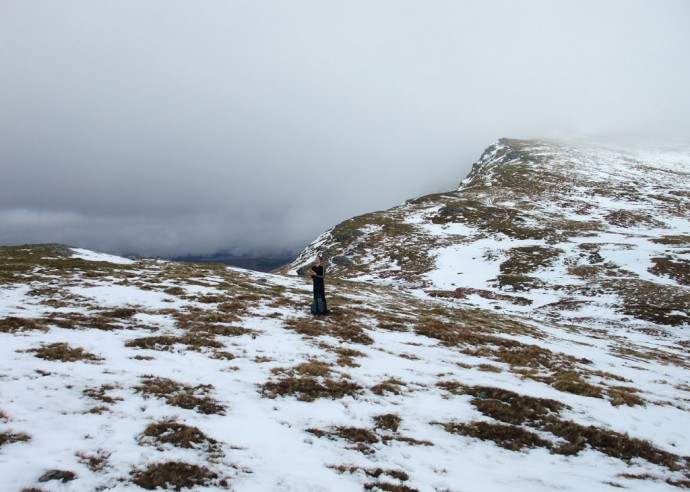 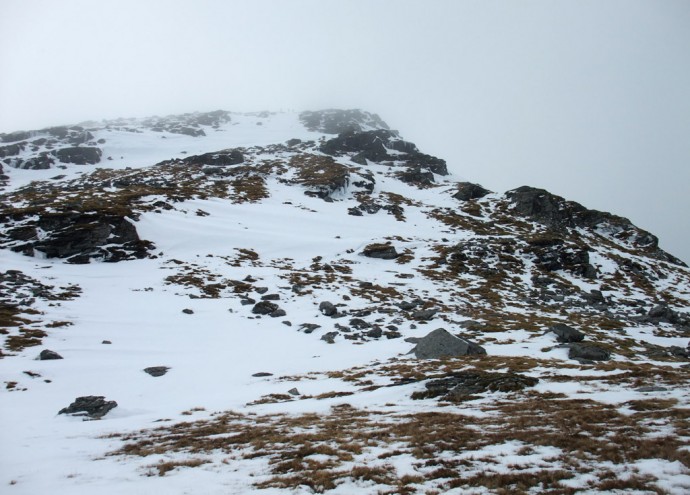 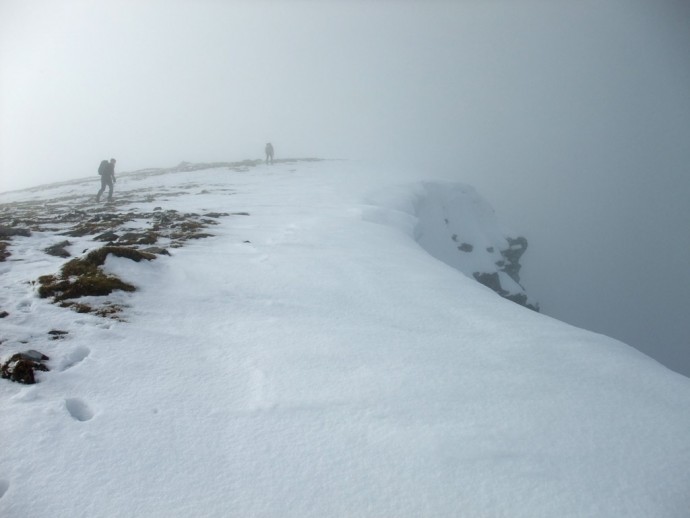 Nearing the top of Achaladair

The summit of Achaladair was reached at about 1:45pm without further alarms and thus began the 3km 'dash' over the minor top and down to the 750m col, with the ever-strengh wind, now south-westerly, in our faces the whole time. Frozen eyelashes and icing on the side of my glasses, fully layered up by now. The col was reached at 2:30pm, no real fatigue yet but that changed after the initially steep ascent of Beinn an Dothaidh, Peter felt fine but my legs were starting to complain with every step. The snow conditions underfoot were not ideal, with a crunchy outer layer covering very soft snow underneath using more effort than was desired, but it would have been a lot worse. Beinn Dorain from Beinn Achaladair - the closest we got to a view all day. 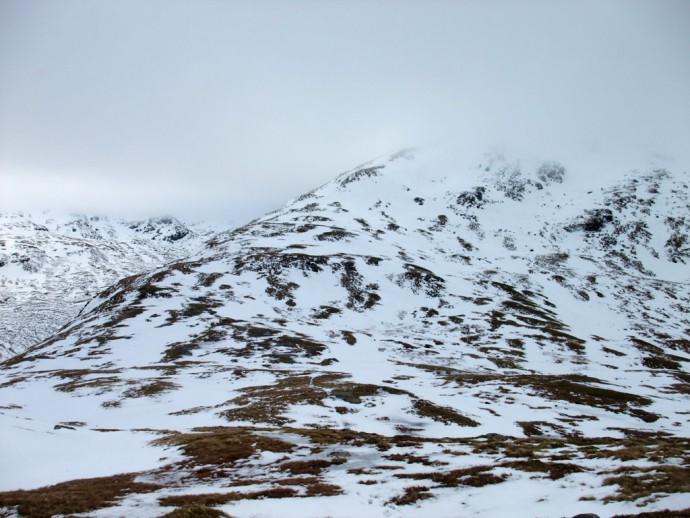 Beinn Dorain's north ridge from near the col.

Worryingly a recurrance of a very old tendon injury in my left leg was starting to materialise and at this point I felt that the fourth munro, Beinn Dorain, my be beyond me today. We had estimated we'd reach the col between an Dothaidh and Dorain between 4-4.15pm which would just about give us time for the final push. The ascent and descent of Beinn an Dothaidh, stopping briefly at the summit for a tactical last banana and wine gums, punctuated by a surreal white-out on the higher slopes, tested the wearying legs and it wasn't long before I was feeling the burn again on the way down. Feeling absolutely knackered by the time we reached the 744m col under Beinn Dorain at 4:05pm, the descent to Bridge of Orchy felt a very tempting option by now but I decided that to come this far and give up on the fourth summit would leave me very disappointed after the initial relief had passed. So on we carried! 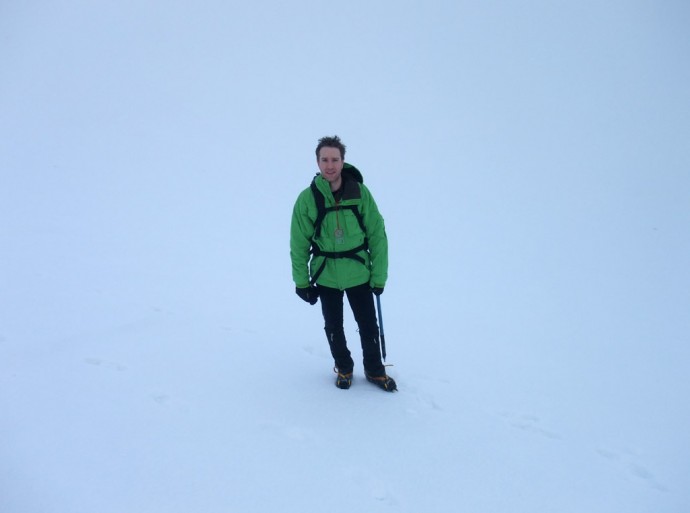 Peter in the white room. 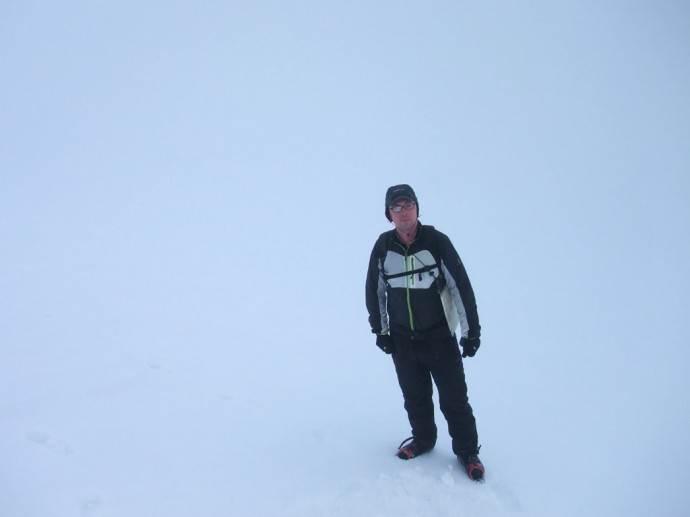 Me in the whiteout on Beinn Dorain.

The ascent of Beinn Dorain was, perhaps cruelly, the biggest of the increasing bealach-to-summit climbs of the day, about 350m in all, and one of the hardest climbs I have ever made given how exhausted I was. Peter surged ahead but I had slowed considerably by this point. Several brief rest stops and regular encouragement followed, and eventually I hauled my creaking frame onto the true summit (luckily I had been up these hills before and I knew of the sneaky false summit up here) an hour after starting out from the col – it was 5:10pm but the light was still holding. The sense of achievement was immense, we had done something which for me at least had just a couple of hours earlier seemed agonisingly out of reach and beyond the limits of my physical ability and cardio-vascular fitness. 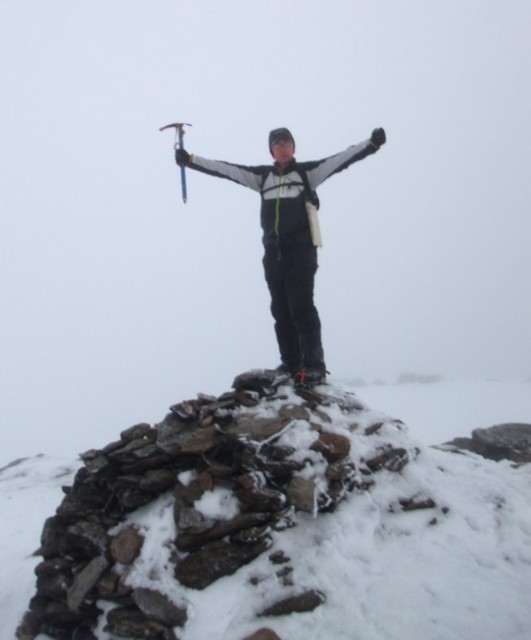 Me, on the summit of Beinn Dorain - victory! 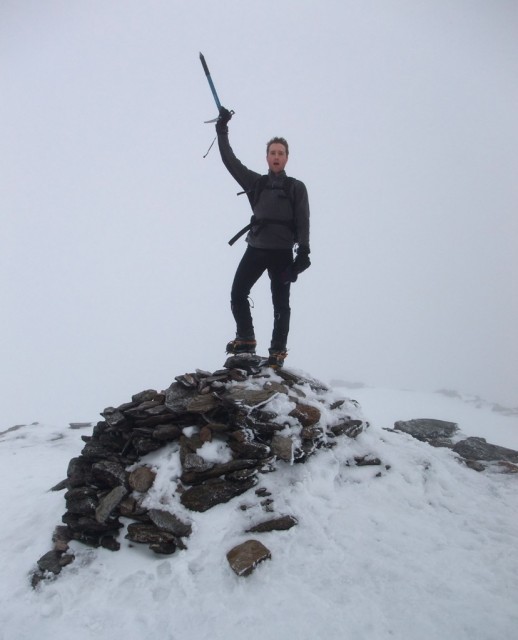 Peter on the summit of Beinn Dorain

The wind had been savage on the final 1km summit ridge trudge and my face was stinging from the cold, most of my gear exhibiting a jagged icy covering. The descent to the col was a blessed relief but the steps became excruciating towards the end as the tendons started to complain bitterly. We managed without headlamps until exactly 6pm, and the final descent to the station and on to the hotel (me seriously lagging behind by now) was completed without further incident, at 7:10pm, over ten hours after the start. Of course by this time the skies were beautifully clear and the view of the stars and possibly Venus was unimpeded by the cloud that had engulfed us all day.

In the hotel, three ales and a delicious burger disappeared without trace in quick time and we emerged merrier to await the coach home.

A brilliant day out for me, despite my years of hillwalking experience and munro count this was a massive challenge for me and one I was delighted to have met, just. Now to go back and do it again, an hour quicker, next weekend

Great report Mike, take care with that tendon, felt your pain at the end there.

Was there a path to be seen through that forest section at the beginning?
Thought the usual route up Chreachain was via the north shoulder?

There are 'usual routes' and there are the mad, meandering routes I usually select up a mountain! After crossing the railway, the path heads along through the (beautiful) Caledonian pine forests for some distance before taking the normal route up that you describe - I spent a lovely few mins sitting at the edge of Lochan a'Chreachain reflecting the monochromatic icy cliffs when I went up that way last March. No semblance of a path on the route we took up, steep but doable.

Good walk,crap conditions. Don`t go back next week-end. Wait for good summer conditions and "Hill Run" it in half a day. I am sure that Peter would be up for it.
Crag rat. (Peters` Dad)

Great report Mike, I felt your pain toward the end there, remember to look after that tendon (I know what tendon trouble can do