Hewitts included on this walk: Yoke


Another grimish week in the lakes looked like it would continue to the weekend – 20% chance of cloud free summits, although the cloud possibly lifting from the South East. With the snow to the ground the roads were not ideal so this made the Far Eastern fells a good target for the weekend. I settled on parking in Troutbeck and doing something from there, possible the Troutbeck Horseshoe (Yoke, Il Bell, Froswick, Thornthwaite Crag, Caudale Moor, Wansfell), but alas with the weather this was quickly revised!

We set off from home at 6 again, arriving at Troutbeck just after 7... where I ended up falling asleep in my down jacket for 30 minutes until it was light – seemed pointless to start walking in the dark when I couldn’t see the weather! Upon waking up I was surprised just how much snow had fallen and how low it was! I think Todd sat in the back was a bit surprised when he woke up too! The cloud and fog was lower than expected though disappointingly although it was much warmer than last week... 1 degree as we started walking from Troutbeck up to the Garburn Pass.

Within about 15 minutes I was warmed up and the blood pumping and Todd was having a good run about to keep him warm – I was surprised how little he moaned, but then it wasn’t ‘that’ cold and there was no wind! The Garburn Road was slow going as it was an ice rink, it is pretty lethal at the best of times and today was no exception, slipping, tripping, sliding all the way.

First picture of the day time and this tree growing out the Garburn Road always makes me smile... As you can see there was very little to see in Troutbeck and the surrounding areas, the cloud is well and truly down! In fact there was so little to see I took a couple of pictures of a frozen wall... Grim as it was, Todd needed a good walk – he didn’t come out with me last week and had been at home all week and he seemed to be enjoying it?! I am fairly sure he is looking at me here saying “I know I am not supposed to be doing this”. Continuing along the Garburn Road it gets a bit steeper and a bit icier! At this point I still wasn’t sure where to go, I think I was planning on seeing what the snow was like on the fellside and then making an informed decision about where, how far and how high we would go. 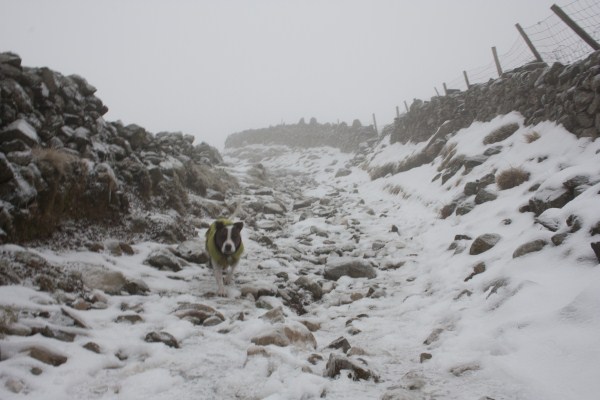 And before long we arrived at the North Face of the Garburn Road – full winter conditions requiring extra care and the right gear... Treacherous icy conditions in which many a mountaineer have come a cropper here and many a tale told of the adventures had... Microspikes minimum today for sure! 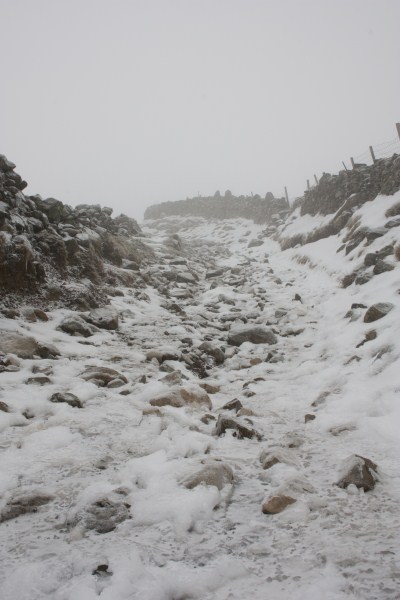 Time for me to don the spikes whilst Todd looks on at the adventure ahead. Just time to take a few short, sharp breaths before tackling the face! We made it! A couple of minor wobbles but we both just about safely traversed the face, no need for ropes today – that is the sign of a proper winter mountaineer apparently! Nothing like the sense of pride you get from conquering such a slope. Everest, K2, Garburn – conquering one of the big 3 on a Saturday afternoon, excellent! In fact Todd was up and down it at least two times! To celebrate, Todd enjoys a good sniff and lick of what I imagine is frozen sheep poo, judging by the smell back in the car, that was definitely the case! Valentines day on the 14th and it looked like love was definitely in the air for these two spiky little critters... Nothing like a bit of barbed wire love as these two come together to form the spike with one back (lol?!) 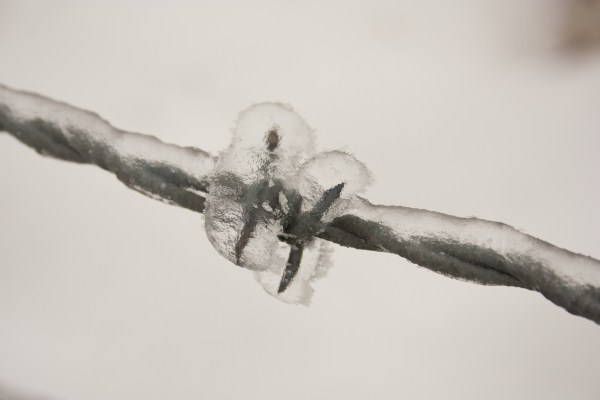 After an hour and a half we arrived at the corner of the Garburn Pass, which heads straight ahead to Yoke (gulp) and right to Kentmere. I was a little shocked at how slow the progress had been this morning and had anticipated getting here a lot earlier, but I decided at this point to push on to Yoke and see whether it looked like the clouds might break at some point – although unlikely you never know!! Spot the dog in this picture? A bit further on we arrive at the wall which marks the route up to the Yoke summit plateau. Looks pretty awful up there Todd! From here it became hard work, the snow was not soft, but an inch thick layer of ice, with hard/soft snow underneath. Crampons now needed for the steps which you didn’t sink on, but then every few steps you sank, very hard work! A little later we arrive at Yoke summit – not much to see except a frozen cairn... I decided at this point, with the snow as difficult as it was (it was fine for me in my crampons, but Todd couldn’t get a grip on the ice nor was he sinking) that we should head back down and do something else, rather than continue to Il Bell and Froswick where there are some fairly big drops! 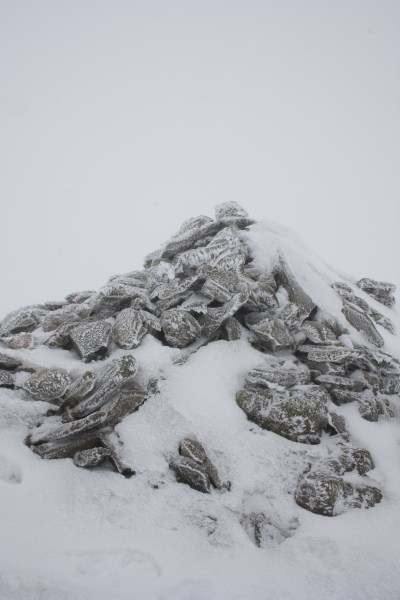 So back down to the Garburn Pass and across the fence with the barbed wire lovers, I decided that Sallows and Sour Howes would be good targets today instead - normally two relatively dull fells... to add a little bit to the walk but nothing too serious. Sallows is an 80m climb from the corner of the Garburn Pass, so up a load more ice/snow and I think we found the summit of Sallows... Hard enough to find in good weather, let alone the snow! Todd at this point wandered off, no doubt to find more sheep poo? But just ended up in nice deep snow! And a short walk (20 minutes??) from here we were looking for the Sour Howes summit – again not marked by anything significant so very difficult to find! The GPS helped us find the top, at which point we could begin a fairly iffy descent down yet more snow/ice where I was fine in crampons, Todd slid... although he quickly realised he could follow my footsteps and use them as nice stepping stones! Clever lad! Just time to stop off and see a giant's grave... scary stuff!! Arriving back at the Garburn Road, I had one last chance to get a shot looking up at some of the trees. It was clear at this point that the weather was here for the day so there was little point carrying on any further... we had both had a good walk, so time to get back to the car and back in time to listen to the football! So back to the car, another pretty grim day in the lakes, but once again it was good to get out and stretch the legs and Todd seemed to enjoy the most of it – so I can’t have too many complaints. And 4.5 hours meant the flask in the car was still warm, which was very very much appreciated after the walk. I think this walk showed me that in the right weather, even the dullest fells can be a good adventure and I have to say I actually enjoyed adding Sallows and Sour Howes!

Roll on next week and hopefully some better weather!

Maybe so, but the problem being there isn't anywhere in the lakes high enough to break through it

Not judging by any of Saturday's pics from Helvellyn, SP etc.

Good stuff CP, better a day in the hills than elsewhere, whatever the weather (well almost

) what the hell is your little dog doing to that stick at the start, is he trying to get it out to play fetch or is he just eating it

I think it is a combination of get it out to eat it, and to run with it... he doesn't do fetch, once he gets hold of it he likes to walk with it in his mouth! Unless you have a biscuit for him lol.

He likes his big sticks, he once dragged a fence pole (3 inch diameter, 5 feet long) up a flight of stairs to leave on the door step, and carried another slightly shorter fence pole along the Hindscarth, Robinson ridge. Lol. In fact I am sure I have a picture somewhere en-route to Great Gable as well where he has got hold of a fence post. All part of the plan to get a new fence at home

ciderpeter wrote:Please note as a disclaimer I have always replaced said fence posts to the piles even if it has meant walking back a few km and fending dog off

that's incredible, it must weigh twice what he does

You could try putting him in for the Highland Games for tossing the caber.