So here was the plan!

our_route.gpx Open full screen  NB: Walkhighlands is not responsible for the accuracy of gpx files in users posts
. The thinking going something like, 'its frozen ground, weather could be worse, definitely not doing this walk later in the year, five Wainwrights', no objections from mates'. Left Bury about 7.15am with Jeremy, no Mick (bad knee!) and into Blackburn to pick up Jim and Lassie (dog not wife!). Arrived Armboth Car park (United Utilities maintained) about 9.15 only to find it was shut! Health and Safety rules ok! it was a bit icy. So parked at the gates and kitted up. Armboth Fell was the first objective. The venerable AW describes this hill thus, 'the flat desolate top is little better than a quagmire, a tangle of swamp and heather and mosses, as is much of the surrounding territory. It can be said of very few fells that they are really not worth climbing; Armboth Fell is one of the few.(Central Fells 1958). but as we set off I thought 'it can't be that bad'! .It was!
It quickly became apparent that the path upward was in fact a frozen stream and it became increasingly difficult to walk up it with any speed as the ice required some dainty footwork to avoid the embarrassing fall. Halfway up the view backwards revealed an inversion and gave just a faint hope that the weather would be kind. . It didn't happen and as I struggled up even with the poles (Yes that's me!) my camera went skittering down the ice and one of the batteries flew over the deer fence and into the forest! Its still there, a Varta AA. As the forest finished we continued up the Watenlath path for a bit then did a left towards Armboth Fell it was as AW described in 1958 except the quagmire was frozen.
The going was better than expected mainly due to the frozen ground, a theme that would repeated many times on this walk. and we got there in the end, the summit cairn being of such stature it can only have been a reflection of the few who disregarded the advice and went there! . HIgh Tove was next AW says 'It is hard to imagine anyone that anybody feels any affection at all for HighTove apart perhaps for the sheep the sheep'(Central Fells 1958). Fifty-four years later nothing much has changed. That's it in the distance Me and Jim on Top

. We met a couple on top who had come up from Watenlath and chatted, then followed to fence to High Seat the highpoint of the day. 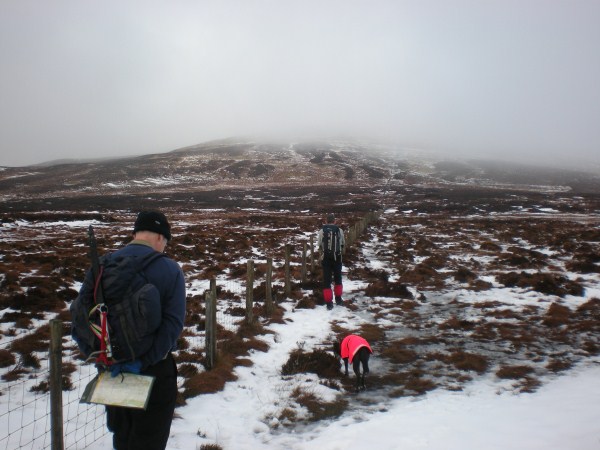 Following the fence 2, the summit in sight


The path was wet but mainly frozen; had it not been so, then wellies would have been more appropriate footwear. However we reached the top and found three others who'd come up from Bleaberry Fell having lunch. We stopped too, fed our faces, met the couple from High Tove again and chatted away. We were discussing the merits of a Garmin E-trex when another walker appeared at the summit cairn. I noticed he had a really fancy bit of Garmin kit and as I was telling of the customer service experience I'd had (broken glass front replaced for £30!) He joined in the conversation. He explained that he relied totally on Garmin stuff as he had had an accident and suffered brain damage, he was registered blind and had been told when he was discharged from hospital it wasn't safe for him to walk on the street. He promptly demonstrated this by having a mild epileptic episode where he appeared to pass out for about a minute whilst standing upright, supported by Jim and the guy from the couple. As he recovered he thanked Jim and the guy saying he usually contrived to fall backwards onto his rucksack, keeping himself safe. He then regaled us with a tale of escorting a group of people off Helvellyn in poor weather, and their comments when he pulled his white stick from his pack and continued into Glenridding. The blind leading the blind literally! When we expressed our admiration and dismay he just shrugged and said 'don't worry this is normal for me!' This is him, if you meet him on the hill give him our best! Whether it was the meeting or something I'd put in the coffee I'm not sure, but as you can see from the map we went seriously off course for a bit and tramped through many a frozen bog before reaching Bleaberry Fell. It has amazing views allegedly, but not today for us. That's it in the distance

so we contoured round till we reached the point where the forest track met the fence then followed it round to the path for Raven Crag, our last Wainwright of the day. Horrors! it was shut! 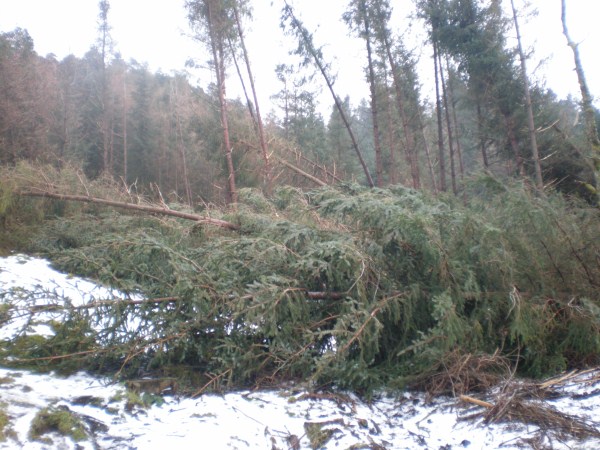 .
Yes, we did take off our packs and see if we could find a way through, but there were a lot of fallen trees, it must have been one hell of a windy day! It'll keep till next time and we wandered down the path to the road and back to the car. A welcome pint in the Travellers Rest, Grasmere by the roaring fire, a sample of their sticky toffee pudding sponge ( freshly baked and free!) and then the drive home.
AW was right and still is, the hills are dire, you'd need a wetsuit if it had been raining for more than a week, but now they're done and duly ticked. At least it was frozen is all I can say!!! The path is also easier from Thirlmere side for next time if that is any use, if you plan on doing it again!

I remember doing these when I was bagging the wainwrights, I ended up doing what I thought was Armboth, Bleaberry, High Seat and High Tove, only to get back and realise I had been to the wrong Armboth summit... so had to go back the next week and get that. I was literally up to my waist at times getting between them, not pleasant at all!! As far as I could tell there was no path other than "through bog" to the summit of Armboth!!

May well leave it till it's frozen like yourselves.

ChrisW wrote:If AW says its dire you should believe him - this is a man who loved the hills even in the pouring rain maybe these should be saved until they are under a few feet of snow

The treck between High Tove and High Seat is a nightmare

Did it last September in a dry spell

Bog was up to the knees

Freezing conditions are best for these. They wouldn't have made the cut if they'd been in the Southern or Western Fells.

well done!
I did Bleaberry fell, High Tove and High Seat in September and it was hideous! I slipped into a bog up to my waist between High Tove and Seat!
I had planned Armboth but couldn't face it that day......put it off for 6 months and finally did it from Armboth car park 2 weeks ago....mainly because I was in danger of leaving it as my very last Wainwright...
Went up and back in exactly an hour.......not nearly as bad as feared

Many thanks all, on reflection a good decision to go when frozen. Jim (see photos) uses a phrase which I think describes the area between Armboth and High Tove and High Seat very well. He calls them 'lakes with grass!'. First coined on route to Slight Side and Scafell over Great Moss. (yes, we'd wandered off course again!)

I read your report a week or so ago as I was planning to do the 'spine' from Keswick to Grasmere with a friend via Walla, Bleaberry, Seat, Tove etc. Your report put me off (thankfully) and we had a beautiful day out up the Langdales Pikes instead... however I went up this afternoon and thought I would just do the High Seat to High Tove bit from Ashness Bridge thinking it can't be that bad...... hmmm... it was possibly the worst walking I have ever done! You were lucky it was frozen.... it was so boggy I ended up traversing the bottom of the fence through the deeper water as impossible to find a route through the boggy bits! And it went on and on and on - and no views because of mist. A route for masochistics only.... However, the route up from Ashness Bridge was stunning, and likewise down to Watendlath. Thankfully. So just wanted to say thanks and that I was so glad to have read your report before taking my friend out...(it was actually her birthday - wouldn't have been a nice experience!) Yes Wainwright certainly knew what he was talking about!

''Freezing conditions are best for these. They wouldn't have made the cut if they'd been in the Southern or Western Fells.''
.........and possibly a pair of microspikes. Theyre excellent for walking on frozen paths.