Share your personal walking route experiences in Scotland, and comment on other peoples' reports.
Warning Please note that hillwalking when there is snow lying requires an ice-axe, crampons and the knowledge, experience and skill to use them correctly. Summer routes may not be viable or appropriate in winter. See winter information on our skills and safety pages for more information.
Post a reply
32 posts • Page 1 of 3 • 1, 2, 3


With the forecast looking next to perfect for the Glencoe area I loaded up the tent on Friday and headed off to Glen Etive. Having made the mistake of camping at the Red Squirrel on my previous trip at the end of May I thought I would find a nice quite place along the the River Etive and I fully expected to enjoy a bit of peace and quiet. There wasn't too many people around at this point so I found a nice spot and enjoyed a small fire for a few hours before calling it a night. 7am and I'm up staring out the tent window at some thick fog. At this point I had high hopes of heading up Ben Starav and getting above the fog. By 8:30 I was off through the fog, across the River Etive and down the boggy path that takes you up the Allt nam Meirleach which branches off the Allt Mheuran. After crossing a wooden bridge the path turns left and follows the stream until a very nice waterfall is reached. Just after the waterfall the path forks and I took a right turn up lower slopes of Ben Starav. 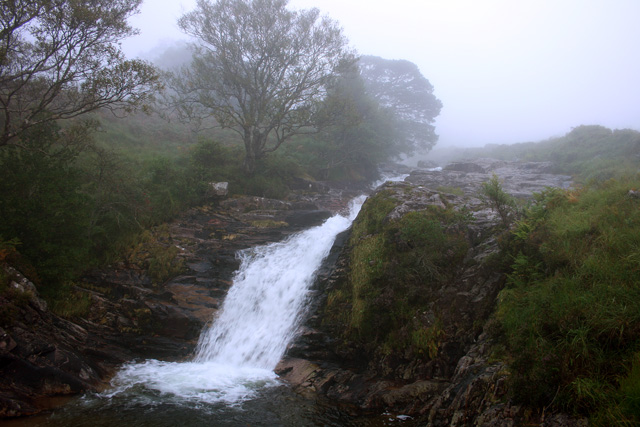 The SMC Munro book describes the climb as unrelenting, yet I found it fairly easy mainly because it levels out in a few places along the way and the path is actually quite good. I guess I got an added boost of energy when my head all of a sudden poked through the clouds. I've been looking at a lot of other people's photos of cloud inversions and was a bit jealous. But on this day I got to see a pretty magnificent sight for the first time. 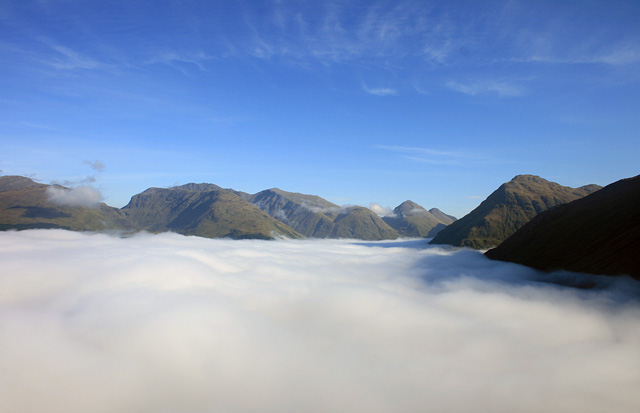 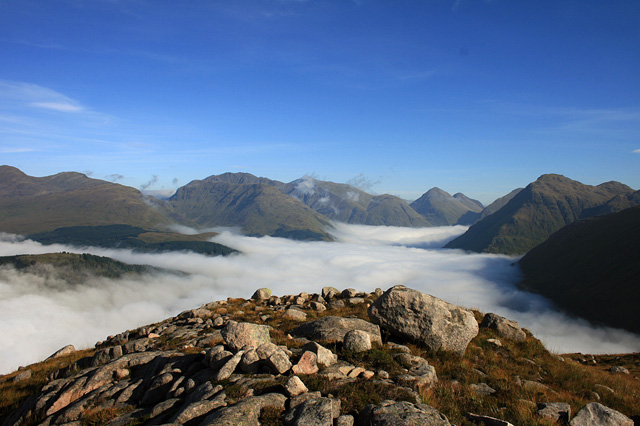 What an amazing sight! So with renewed vigor I trudged ahead up the slopes of Ben Starav, looking back every so often to look at the inversion. 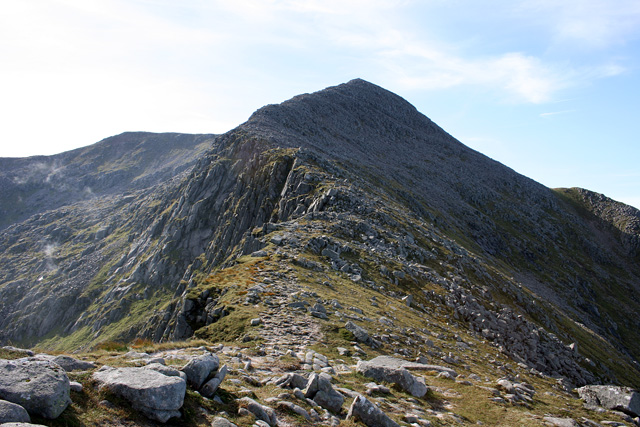 The climb to Ben Starav gives you a great view of two of its coires and a nice view down to where the River Etive empties into the loch. The going becomes a bit tougher on the last push to the top as you have to climb boulders until the summit is reached. I would be a bit worried here in poor visibility as the path often creeps too close to the deep crags for my taste. At the summit I stopped for lunch and took in the excellent 360 degree views. Most impressive was Ben Cruachan to the south. 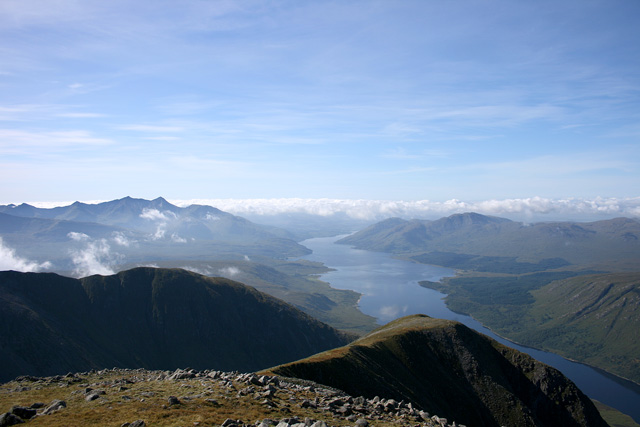 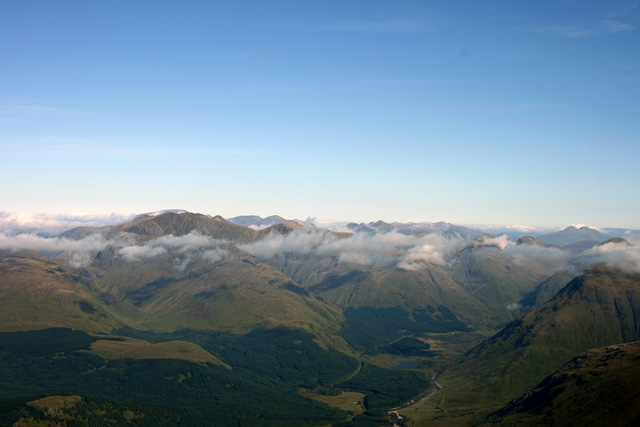 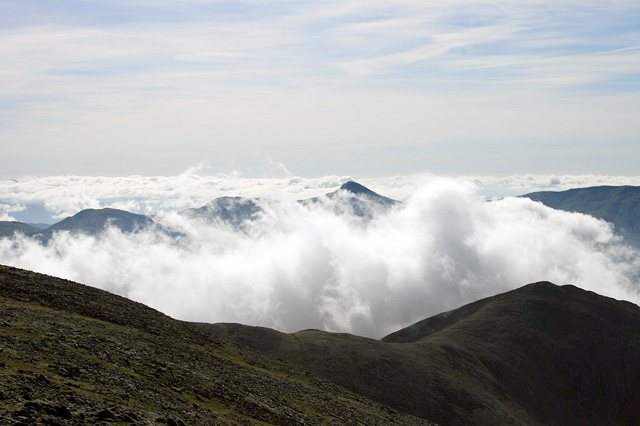 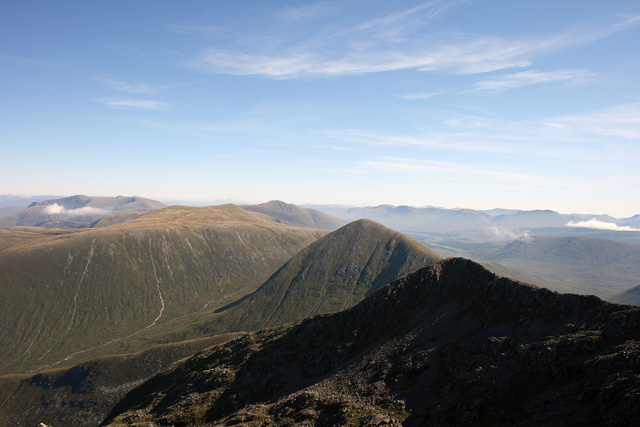 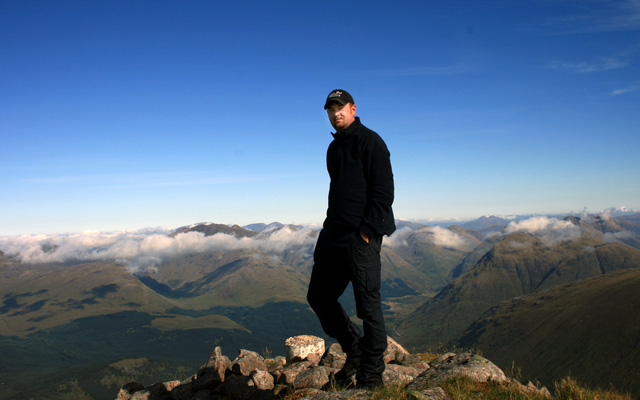 After about 30 mins at the top I headed over to the north summit and made my way down to Stob Coire Dheirg. At this point I decided to conserve my energy and possibly add Beinn nan Aighenan in my walk so I traversed around Stob Coire Dheirg leaving the windy easy scramble for another occasion. Walking around the top was fairly easy and I reached Bealachan Lochain Ghaineamhaich (say that 5 times in a row) and gave the addition of a third munro about 5 minutes thought. Beinn nan Aighenan is not the most impressive munro in the area and in the end I decided that two munros on this day would be enough. So off to Glas Bheinn Mhor. 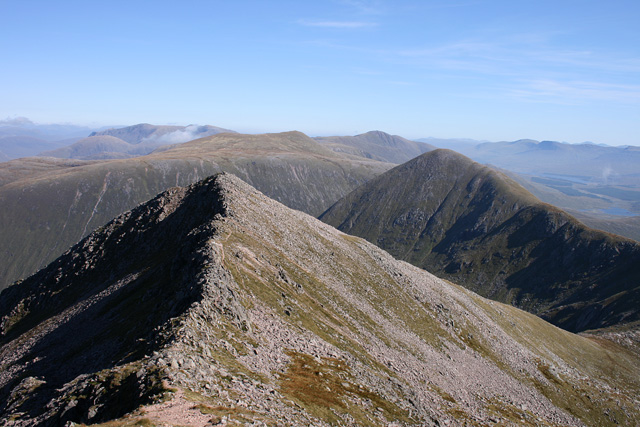 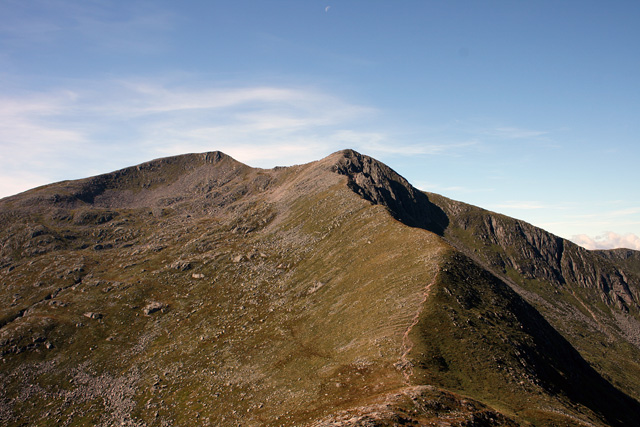 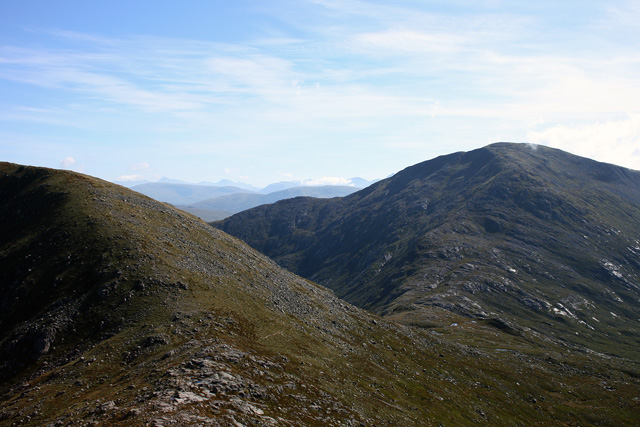 The walk up to Glas Bheinn Mhor was fairly easy going and it wasn't long before I was rewarded with more amazing views, especially to the east toward Ben More and down to Loch Tulla. Ben Nevis was poking its head over Bidean from this top as well. 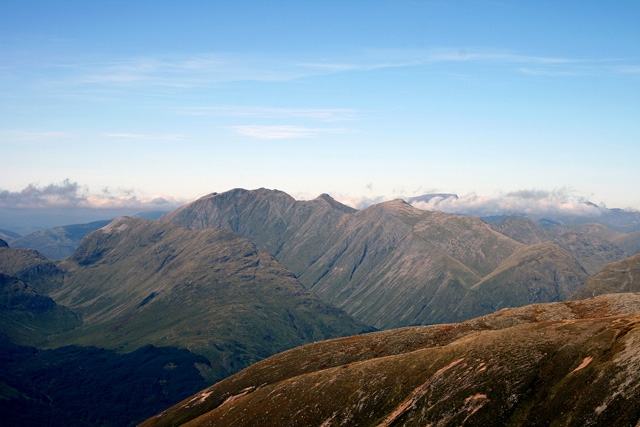 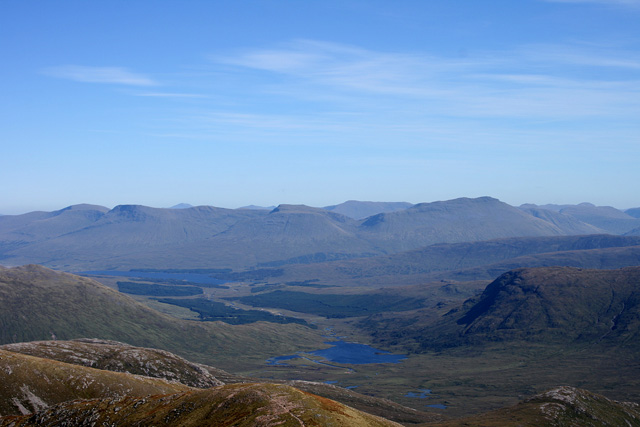 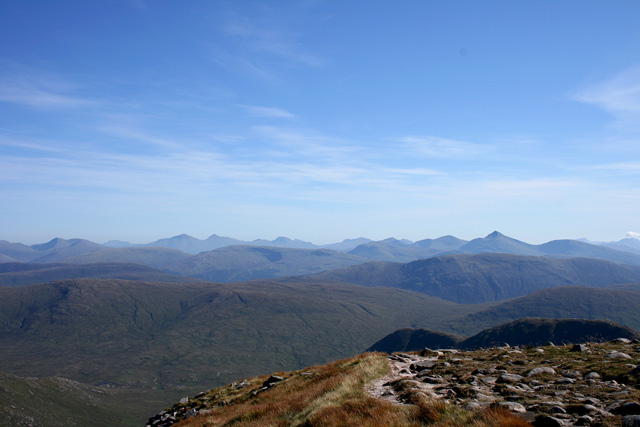 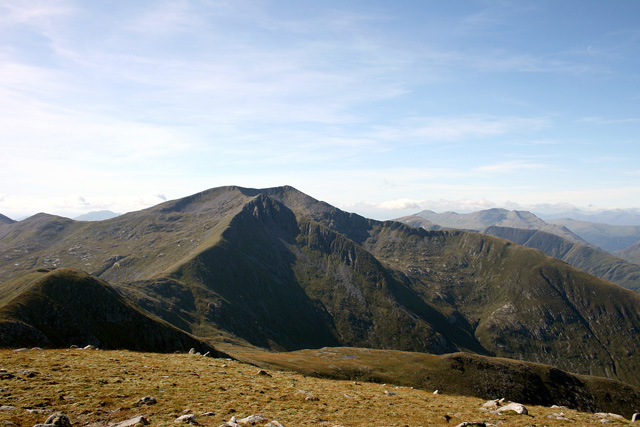 Now for the descent, though I was reluctant to give up the splendid views. Myself and two walkers who had driven up from Cumbria descended together and I found the path easy going, though steep in a few spots before you make the left turn down the Allt Mheuran. There are plenty of water slides down the burn before you reach the Robber's Waterfall which in itself is very attractive. From here down, however, the descent turned into Bogfest 2009. Hardly a dry stretch the rest of the way. At one point before reaching the bridge you cross on the way to Ben Starav it goes through ferns and felt more like a walk through the Amazon. You reach the path back to the car with some relief and very muddy boots. 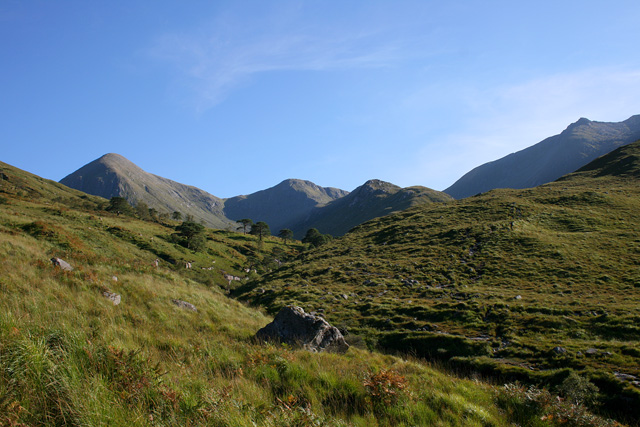 With the exception of the descent, this has to be one of my favorite walks to date. Ben Starav is a class mountain. I'll probably never forget seeing the fog covering Glen Etive and the view toward Ben Cruachan has certainly put the munro on my to-do list. The addition of Beinn nan Aighenan would be easy for those of you in great shape, but I'm glad I skipped out on it based on how I felt the next morning. I had every intention of returning to camp, cleaning up a bit and going to the Clachaig for dinner and a pint and then returning to my tent to do Buachaille Etive Mor the next morning. Sadly, upon returning to the tent I found a gaggle of 15 or so merry makers had set up a tent city within yards of my once peaceful and quiet spot. I lost all interest in camping at that point and I packed up and returend to St. Andrews. Next time I'll find a spot that isn't big enough for anyone but myself.

That's one fantastic report Stretch - the photos, especially the inversion, are stunning

I remember that bog too; the lowest ground is hideous and is crossed on the usual route to Stob Coir'an Albannaich as well - one for the snorkel.

I to have yet to see an inversion and your photo`s are among the best I`ve seen.

Can't wait to find one of these inversions myself!

Thank you guys, I somehow knew based on the previous day's weather that it would only be foggy for a little while so I headed on up the path. About halfway up the slope I caught a glimpse upwards of the hill I was on and then realized I was coming out of the cloud. When I turned around my jaw dropped.

What made the day even better was the fact that Ben Starav wasn't heavily populated. I had the summit to myself and only met a couple of other walkers all day.

I presume your using a good camera as well are you?

There's a lot to be said for getting a quiet day. I had a wander round the low level Glen Nevis circuit, and on the path itself I passed NOBODY in either direction. But look up any time towards the Ben Nevis path and it resembled your local high street, just a constant stream of walkers. I'll definitely be saving Nevis for an early Tuesday morning or something!

I carry a Canon EOS Rebel Xti, it's a bit heavy in the pack but I'm really pleased with how its worked over the past 2 years. On bright sunny days the photos can be a bit overexposed so I tried to adjust some settings this time and for the most part my shots were good. As for the crowds, the number of people along Glen Etive tripled by the time I finished the walk, but most of these were just campers and not hillwalkers from the looks of them. But I heard on the radio on the way home that a couple of guys actually played golf on Nevis Saturday so I'm glad I wasn't up there for that.

Yeah I also heard that on the radio on my way home, I never caught the story properly, but I heard something about them playing golf on Nevis!?!?!?

You should see what the sun/exposure did to some of the pics I got on Sat from my good-but-not-DLSR-by-miles camera!

I had brilliant views all day from in Glen Nevis...but that yellow blob was right behind some of the best (that's not a complaint!) I'll do a report for my walks sometime soon....

Fantastic report and pics Stretch, although I have to say I feel a bit "gazumped" - I was up these two mountains on Saturday as well and thought I had some good photos! But you were away a good couple of hours ahead of us so I think you got the full benefit of the cloud inversion. The views from the summits were absolutely stunning - especially Cruachan from Starav. I'll get a report and pictures up soon, but I don't think I'll be able to compete!

Hi Stretch,
What a well written report with great pictures. Just love the inversion, I hope to be in one one day. I was up Ben Vane on Saturday and could see all the clouds in the valleys from afar but no such luck where I was. I had great weather though.

Thanks Graeme and Monty!

Graeme, did you enjoy the descent from Glas Bheinn Mhor as much as I did

After Robber's Waterfall it was hell.

Monty, looks like your day out was equally as nice, how long do you reckon it would take someone to walk both of those without the use of a bike for some of the way?

HI Stretch,
The bike saved me probably 50 minutes in total. Therefore if I had walked it all it would have taken me 6 hours 45 mins approx.

Bear in mind that I walked hard up Ben Vane and ran down a fair bit of Ben Vorlich. Also these two together make a touch uphill ascent.

I would say that 8 hours would be a reasonable target time to walk it all.

I think "boot sucking nightmare in bog hell" would about sum it up!

A report and views to lift the heart, thanks for sharing and nice job in getting to see the inversion.

seen a good few inversions lucky for me ...cant get enough tho..
start of my walk career seen two in same area...from Bein Tuileachean

as i said tho terrific pics of a class mountain..starav that is, not the other one