Finally my first walk in Scotland of 2012 (apart from walking to the shops that is...)

I had an extended weekend at home (Friday morning to Monday evening), but as I hadn't seen my wife for 3 weeks, a trip down to the Glencoe meet was definitely off the cards! Even a half day away seemed a bit unreasonable, so I turned my attention to some lower hills that I'd been meaning to climb for some time now. I practically circled this hill on my bike back in 2009 (report), and had intended to cycle to it last year. As ever, I didn't get round to it, so it made a perfect couple of hours away from the house for Sunday morning.

I was briefly seduced by Sgurr Marcasaidh across the loch, but remembered my promise to be home for lunch. Anyway, Sgurr Marcasaidh is going to give me a great day out with Creag Loch nan Dearcag at some point, so worth saving.

our_route.gpx Open full screen  NB: Walkhighlands is not responsible for the accuracy of gpx files in users posts
I parked at the gate to the Luichart dam. The sign advises that it is possible to drive to the dam during weekdays, but it is only 5 minutes further on, so hardly worth the bother. Walking up the road, it felt like spring was in the air, with the mixture of woodland, rock and heather bursting with colour. Any thoughts I had about being on the higher hills vanished when I got to the dam - there was more than enough stunning scenery here!

The end of the Sgurr Marcasaidh ridge from the Luichart dam road: 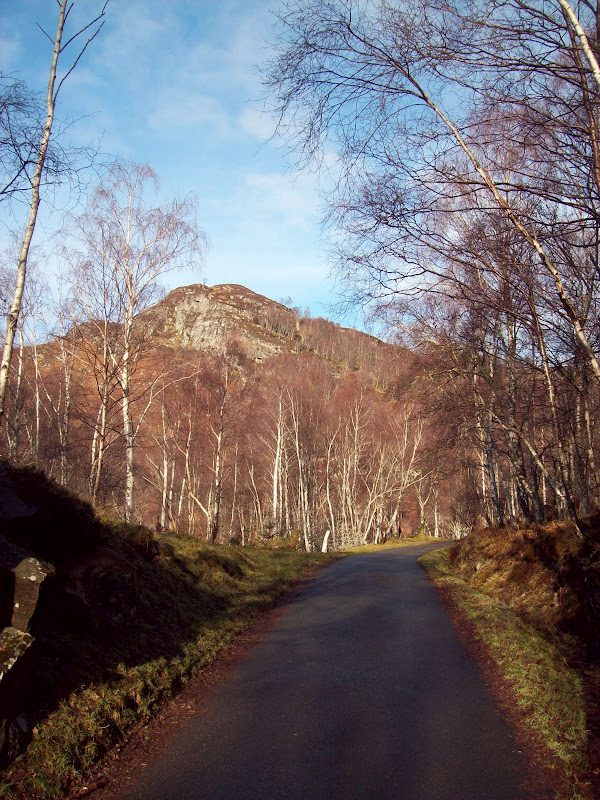 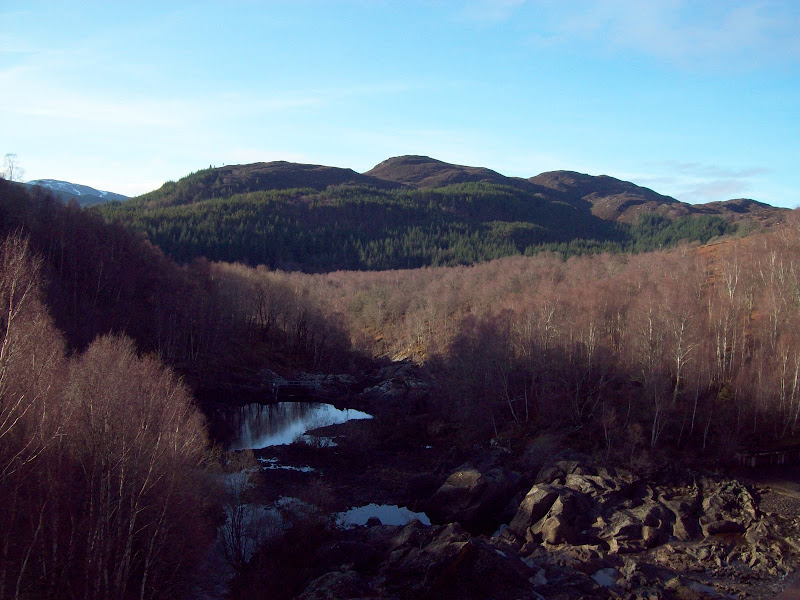 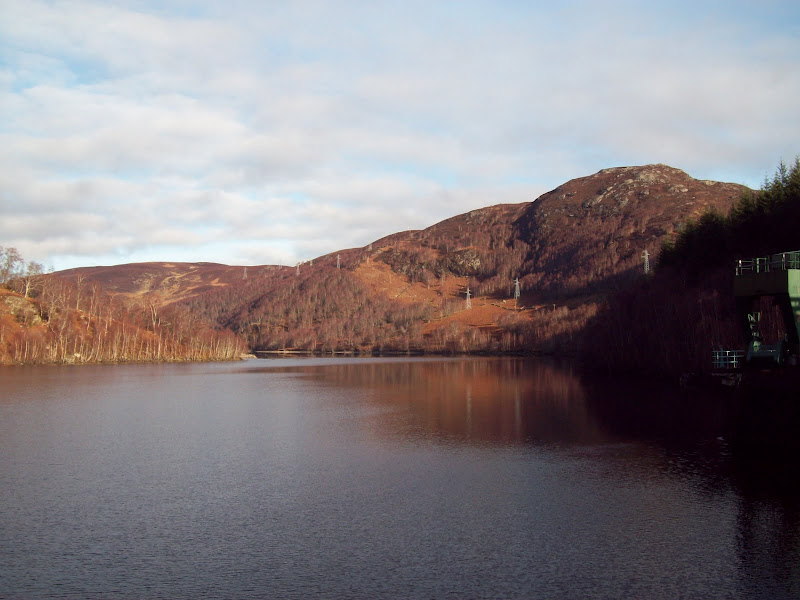 I followed a break through the trees which led me above the eastern shore of Loch Luichart. The going was easy underfoot apart from a short area of moss-covered boulders. Through a hole in the fence further on, and I climbed up to a higher break which contained some pylons. Rather than follow the pylons, I climbed across the break and up into the birchwood above. I wasn't sure what to expect, but the trees were widely spaced and the ground dry and firm. The going got a little tougher as I left the trees behind, with heather underfoot, but it was still fine. Before long, I was at Loch an Dubh-chairn, with only 100m of ascent left. As I climbed, spectacular views opened up down Loch Luichart. I had some idea what to expect, but was still surprised at how rough and remote it seemed. It felt like a small chunk of west coast sea loch had been plonked beneath me.

Through the fire break to the summit: 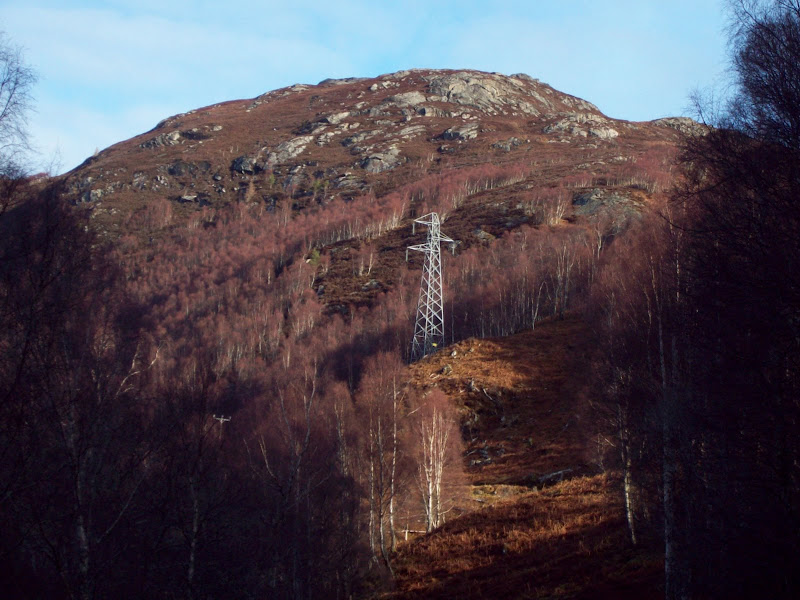 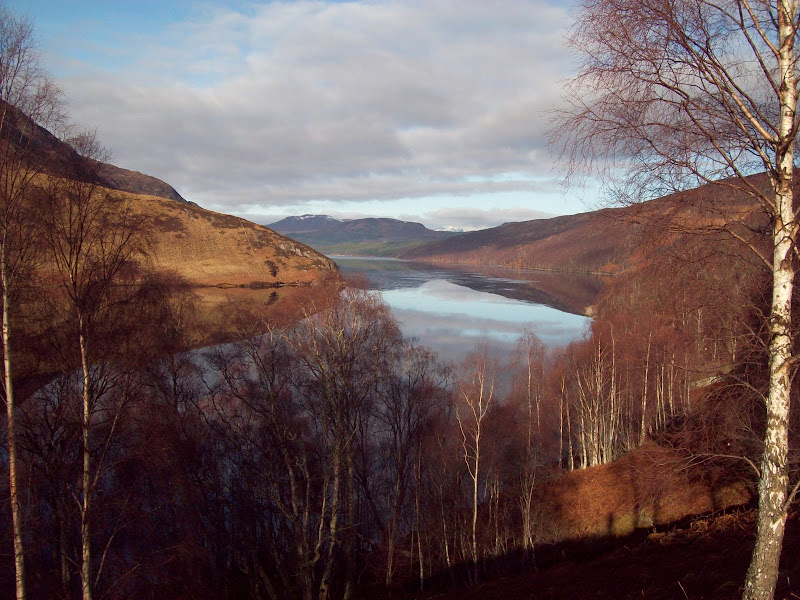 Sgurr Marcasaidh across the loch: 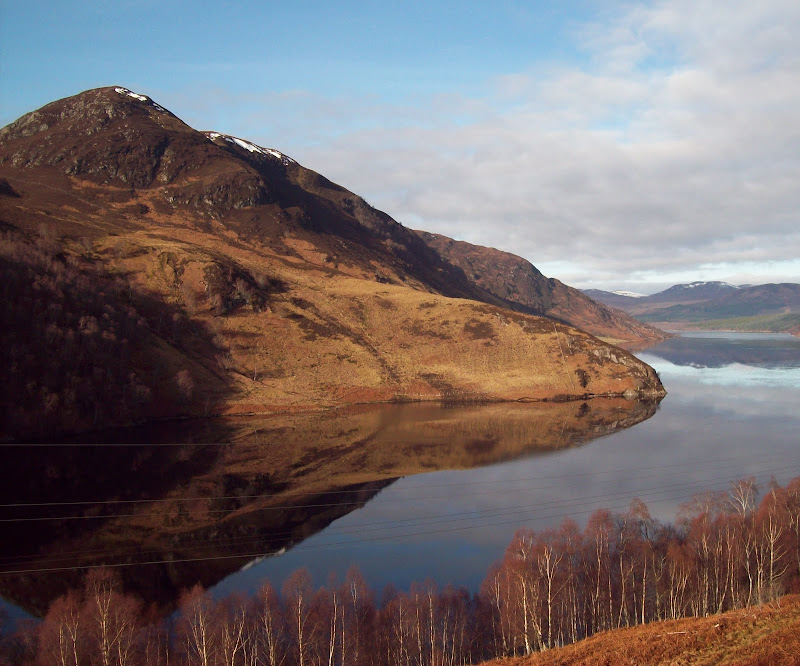 Back to the dam: 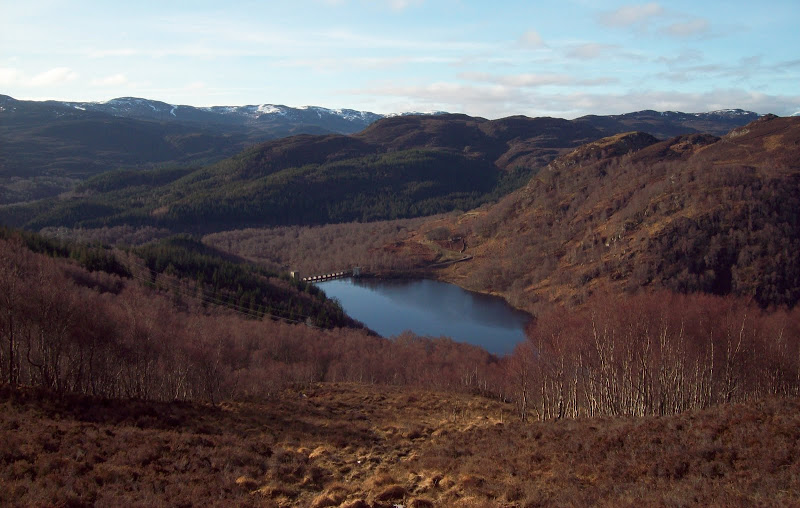 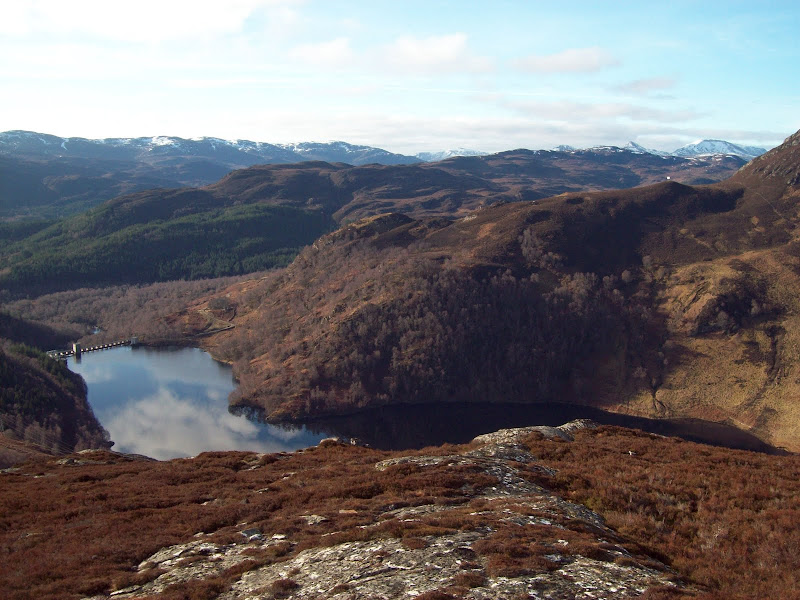 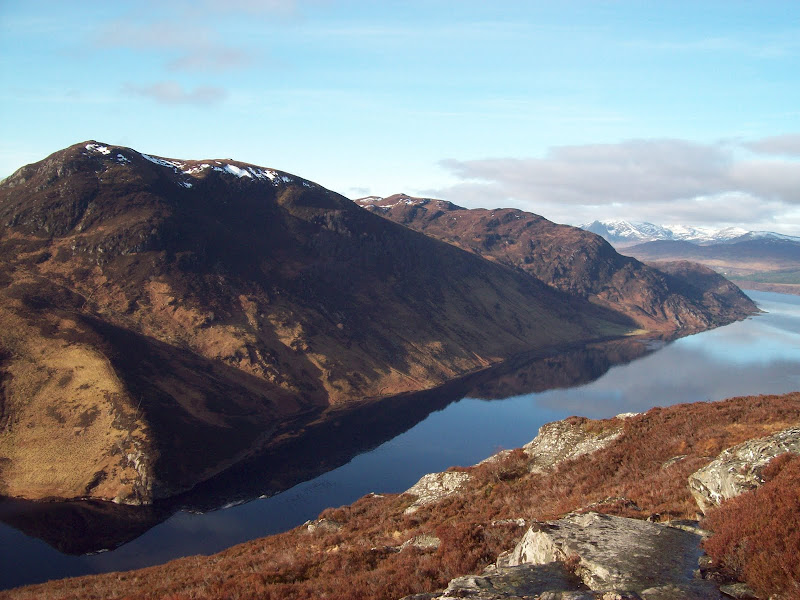 Across the spur of Sgurr Marcasaidh to the Grahams and Corbetts of Strathconon: 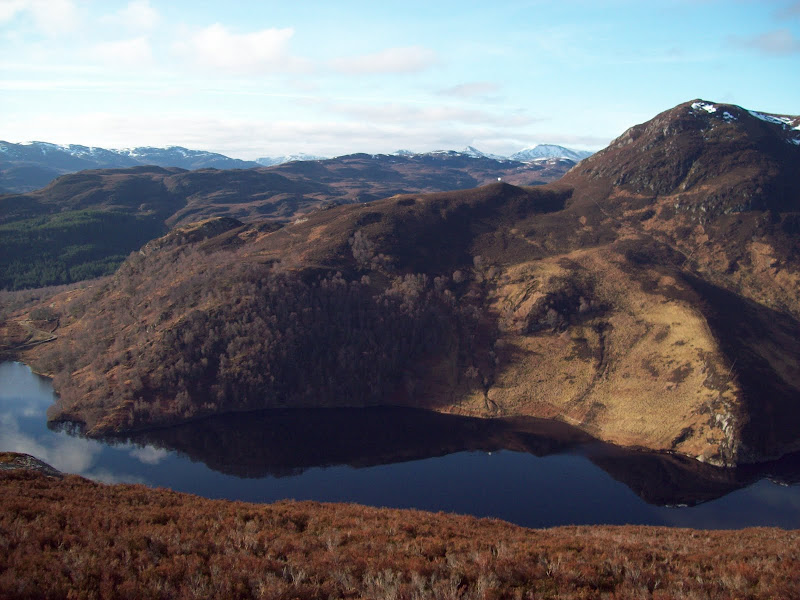 The last section was a mixture of heather and walking across flat slabs of rock, and there were good views to the Fannaichs and Beinn Dearg hills. While a lot of hills were obscured (the summit was only 370m high after all), I didn't want to be anywhere else at that moment, so I stopped for a good 10 minutes. The weather was way better than anticipated. Much as I have been enjoying my re-discovery of the Welsh hills, it was great to be home again (I have to admit I'm starting to get a bit confused as to where home actually is these days).

Strath Garve to Am Faochgach on the extreme left. You picked the wrong day Monty! 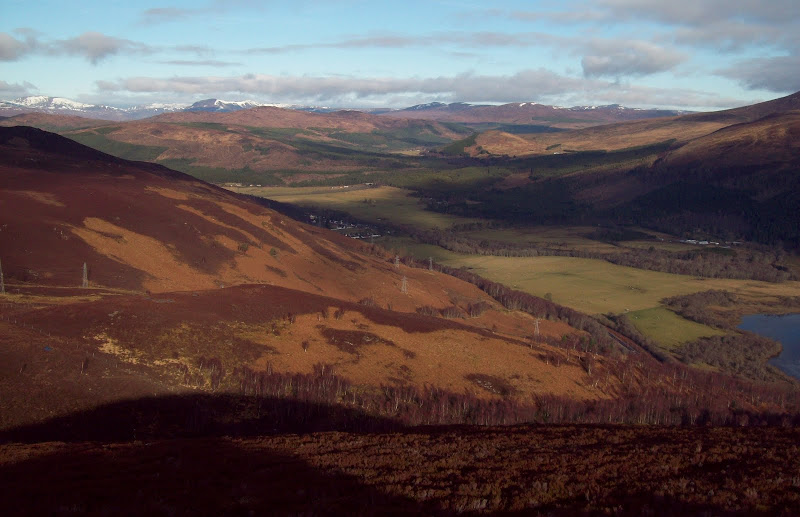 Loch Garve and back over to the Black Isle: 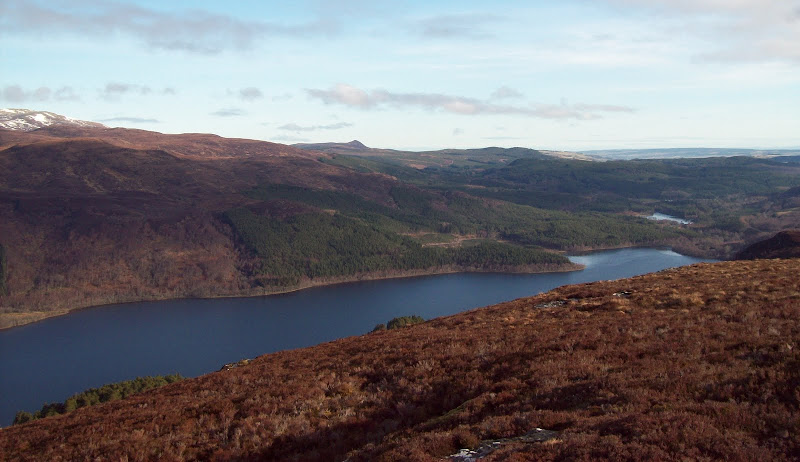 Zoom to the eastern Fannaichs: 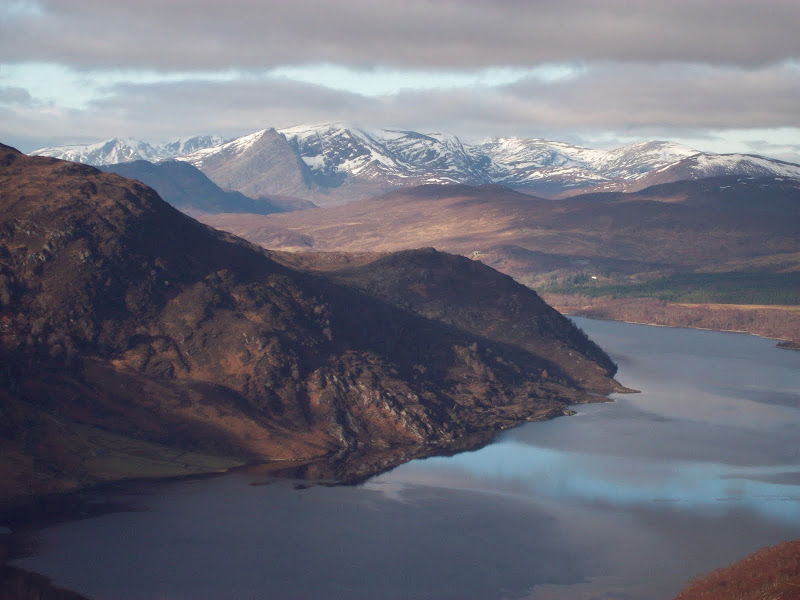 Loch Garve and the Wyvises, little and large (large behind with the majority of the snow): 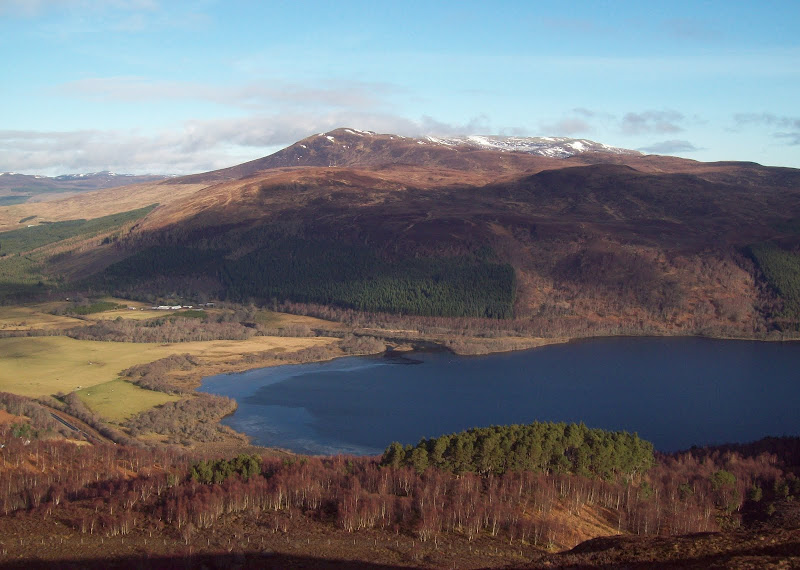 I wandered around the summit area to get the best views in each direction, then took a slightly more easterly route down to Loch an Dubh-chairn, before following much of my outward route back to the car. I was home by 1pm, and glad I hadn't tried anything bigger, otherwise I would have missed this

Loch an Dubh-chairn on the descent: 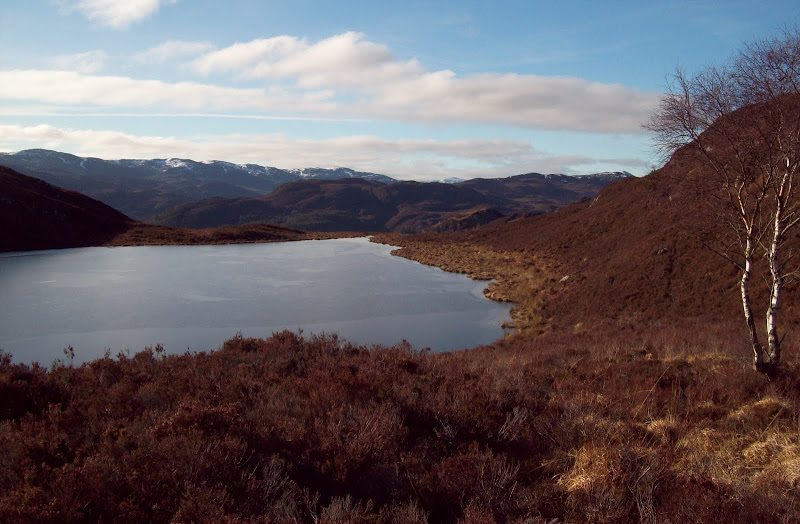 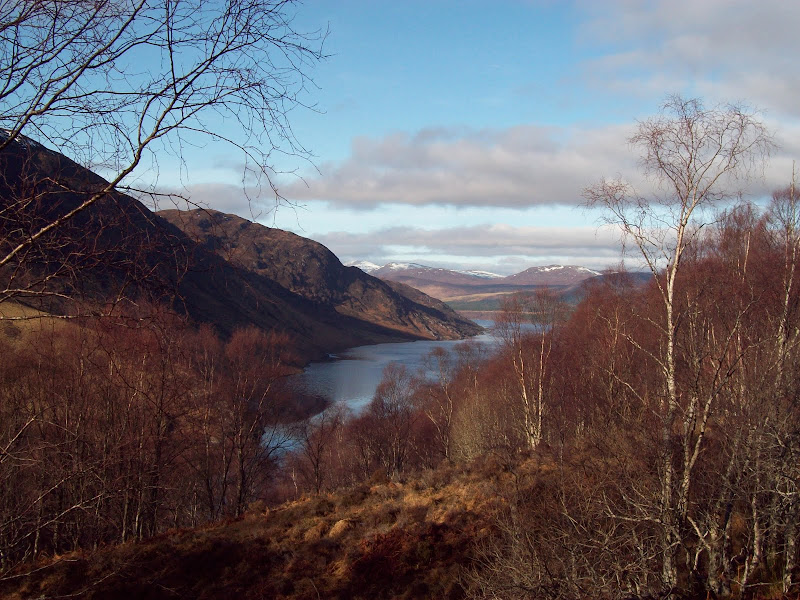 Easy walking through the woods: 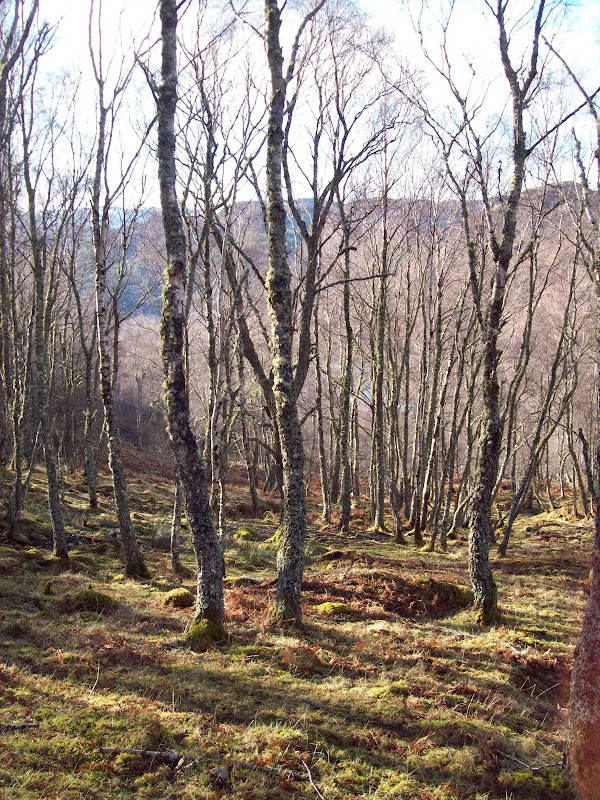 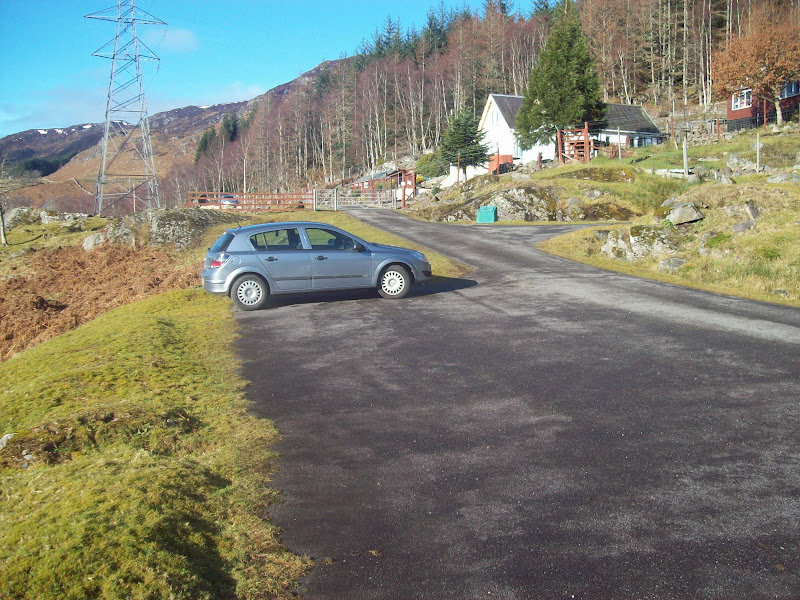 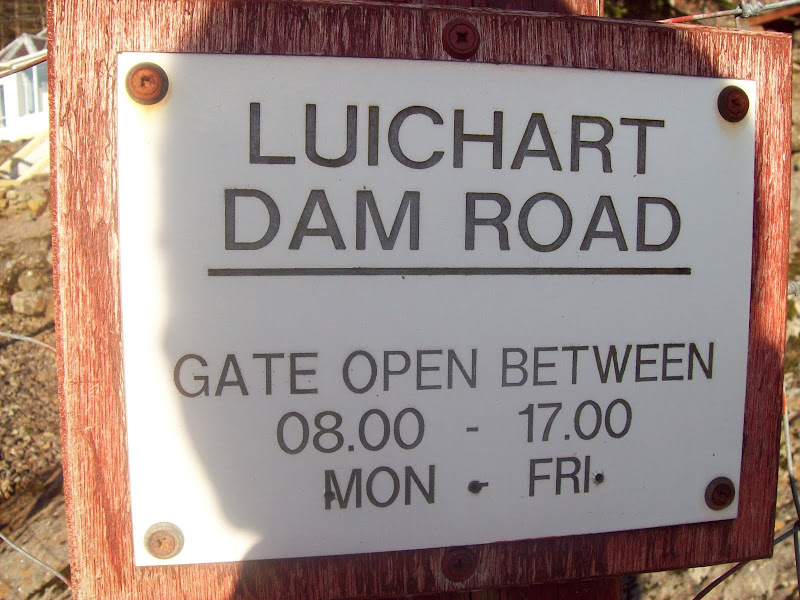 This is a cracking wee wander Malky with some stunning winter colour on those birch trees (looks almost like spring) the shot of Loch Luichart and the Corriemollie hills is absolutely beautiful, makes me homesick

Superb views, thank you for sharing

How many times did I drive past this little hill, admiring its shape and thinking - is there an easy access to the summit? The Loch Garve side looks very walker-unfriendly. But I knew it must be a good viewpoint and now it will go on my shortlist (which is very long already

This is a super wee hill. With great summit views for minimal effort. Interesting to see another route up this hill - I did it from Garve at the other side.

Allways enjoy the Sub 2000 walk reports. Did you a report on your walk to the shops or have i missed it?

A hidden gem! Nice one.

Thought I recognized thay loch malky,I was working at Lochluichart on the Garve to Achnasheen road 3 weeks ago & was wondering the name of the hills around................now I know......

there was more than enough stunning scenery here!

I would tend to agree with that statement

I remember your report well Foggie - it was certainly one of the ones that made me take notice of this hill.

gammy leg walker wrote:Thought I recognized thay loch malky,I was working at Lochluichart on the Garve to Achnasheen road 3 weeks ago & was wondering the name of the hills around................now I know......

Could be worse places to work - almost looked at moving there once before reality kicked in. Anything to do with the (whisper it) Lochluichart Wind Farm? Or the hydro power station at Grudie Bridge? Can't think of much else out that way.

Fabulous stuff, been round that part of Scotland many times, but not up this hill. Cracking photos, but I see what you mean about the lack of snow.

Was somewhat alarmed by part of Foggie's comment - 'I like the disclaimer on WalkHighlands FB Page - (Warning: Malky walks very very fast)'

Some great views, malky! Thanks for sharing them.

Great stuff, this brought back a memory of a fishing outing on Garve and Tarvie lochs with my Dad and little brother way back in the early nineties...happy days. The surroundings were, as I recall, particularly striking then.

Have added these hills to my wish list and hope for as beautiful a day as this.

Thanks for the memories.