A Strange walk today and far from what I had planned. Indeed I planned many walks for this weekend. I was considering heading North to tackle Beinn Dearg and a few neighbours and I also considered going up to Helmsdale and climbing Morven and the Maiden Pap and last night I was considering going over to Tomintoul and walking along the ridge on the Cromdale Hills and in the end I head down to the Cairngorms to do one of my favourite walks along the ridge from Badaguish to the Corbett above Ryvoan Bothy.

However despite getting up very early and being ready to leave I got seduced into Danny Baker on Radio 5 and didn’t end up leaving until after midday. This delay was also partly suggested by the weather, which wasn’t looking to clever over Inverness.

I was buoyed by snaps of blue as I headed south but on arriving in Aviemore the weather was proving heavy. I couldn’t see any hills at all such was the clag. Although the Corbett behind Aviemore was tempting. But going up held little appeal since the views would be none and navigation would mostly be on the compass.

So instead I parked up at Coylumbridge and walked to Loch an Eilein and took an extended stroll through the Rothiemurchus forests. Something I have always toyed with everytime I come to the Cairngorms.

Following clear well made tracks I made it to the Loch and the estate car park – which charges nearly £5 for parking incredibly. Happily walkers are admitted for free and I headed to the loch and relaxed in to the astonishing views before heading around the west side of the loch and when the tracks crossed I head further out west amongst the beautiful scots Pine and Juniper forests towards the Lairig Ghru pass and the Cairngorm Club Footbridge before heading back along a beautiful straight track through straight Scots Pines and a path blanketed with brick orange fallen needles.

Highly recommend these tracks for bikes or feet when the clouds are down. It really was quite delightful to wander these wonderfully made tracks and there are so many routes to select you could choose one as short or as long as you like.

To finish the day I got back to Coylumbridge and then drove up the road to Glenmore where I parked and re-packed my bag for overnight and a day walk tomorrow and headed of with my head torches in the dark to walk to Ryvoan bothy in the pitch black along another very well made track which afforded me no stumbles at all and the delight of trying to identify trees under LED light. The Scots Pines had a look of ocean corals!! I meet a couple of walkers heading of Bynack More at the junction of the track and got some news on the conditions on the munro which firmed my resolve to climb my first winter munro in the morning with little snow on the summits and a sunny day forecast.

Weary legs by now but they were soon lifted when I smelt the smell of wood smoke in the heavy fog and in the dark now knew I was close. Six folk in the bothy and a really good crowd including a couple of lads from England up from Newcastle for the night who furnished me with whisky and dry and carried in the bag of wood that was drying my gaiters. Really lovely evening in the bothy.

R-Forrest.gpx Open full screen  NB: Walkhighlands is not responsible for the accuracy of gpx files in users posts 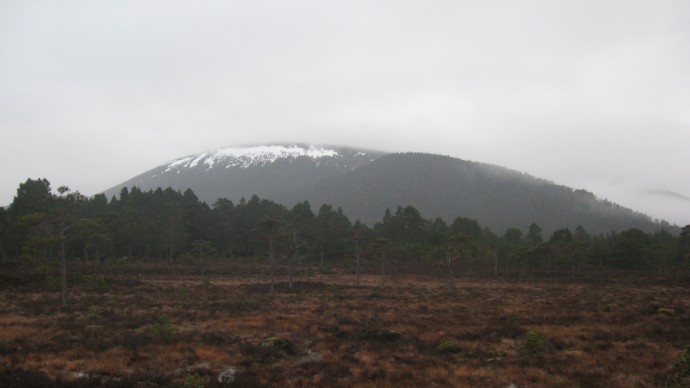 Re: Unexpected walk in Rothiemurchus Forrest