Something of a revenge mission as, almost a year prior, I'd nearly come fatefully unstuck on Beinn Fhada on a foul, clagged-in day of collapsing cornices, severe avalanche risk and a tumble on a steep, icy slope. Mistakes were made and lessons learned; a year older and hopefully wiser and a much nicer day, time to try again.

After enjoying a spectacular sunrise over Loch Lomond, I set off from the carpark just before The Study on the A82 just after 9am and headed off into the Lairig Eilde; a lot of folks on the Wee Bookil as usual but few heading this way. A steep, unrelenting slog up from direct under Beinn Fhada's 823m minor top, some gentle scrambling higher up, stopped for elevenses and watched a fell runner make his serene and peaceful progress up the glen far below. Sunrise over Loch Lomond from the coach window.

A fine day dawning overhead – blue skies, little cloud or breeze, and it was wonderful to emerge on the ridge to fabulous views of the snow-clad Bidean massif. 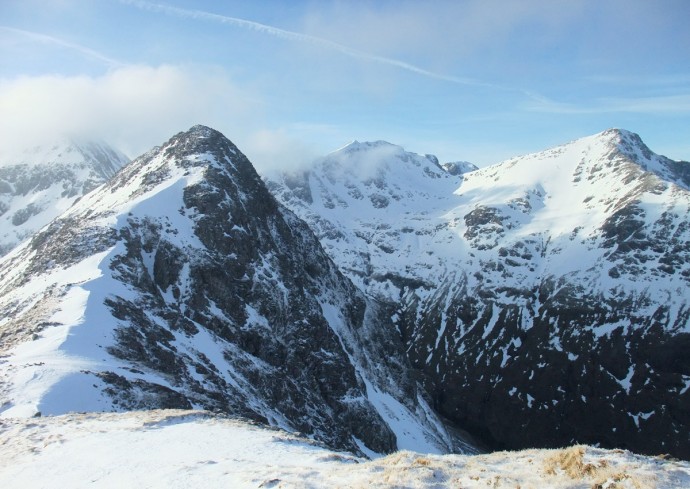 View of Beinn Fhada and the Bidean massif

Over the several, narrrowing, tops of Beinn Fhada, noting along the way the sections that had caused problems last year in low visibility, breezed past this time out. Crampons on early and made quick progress on lovely hard snow.

As the notch in the ridge approached, so did the anticipation of the ascent onto Stob Coire Sgreamhach, hitherto did we come a year before, but no further. This time with blue skies and perfect conditions underfoot, it was a breeze to find the route up, starting on the left (south-west) side a narrow ledge passes under the initial crags before doubling back and onto the crest of the ridge, from here it's steep and slabby with some sections requiring care but no serious difficulties, then a gentle climb to the summit of the munro.

The Bidean massif from Beinn Fhada 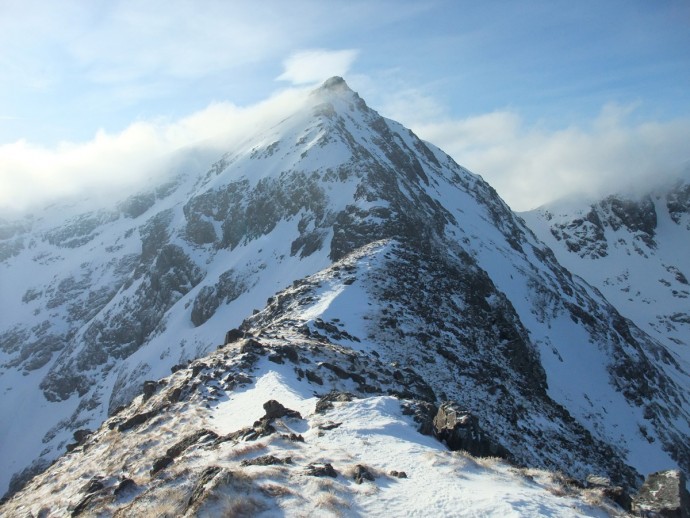 Approaching the top of Beinn Fhada Wonderful views on reaching the ridge, temperature inversions had been promised and some of the hills to the south-west did indeed have blankets of cloud forming below their summit, Ben Lui the best example. 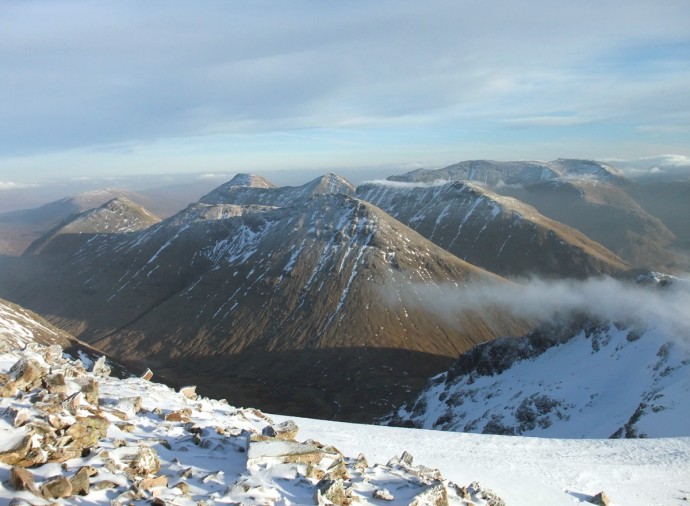 Major cornicing at the top of the Bealach Dearg, not a wise plan ascending or descending this way in winter unless you're a serious climber – the snow slopes looked near-vertical. View from Bidean back to Stob Coire Sgreamhach 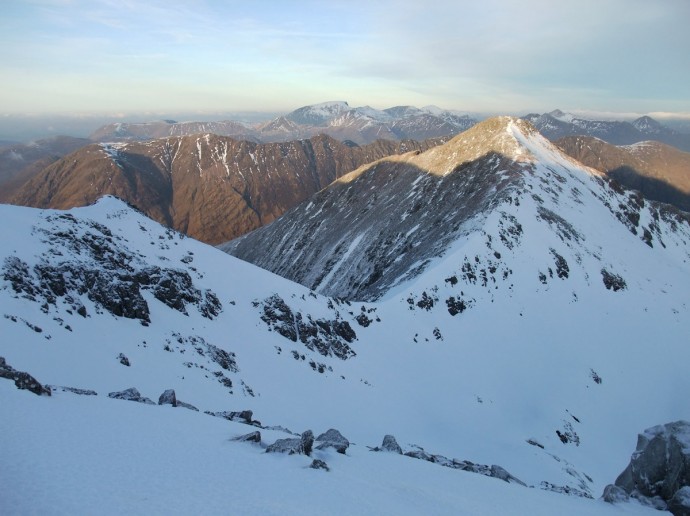 Stob Coire nan Lochan with the Aonach Eagach and Ben Nevis beyond. 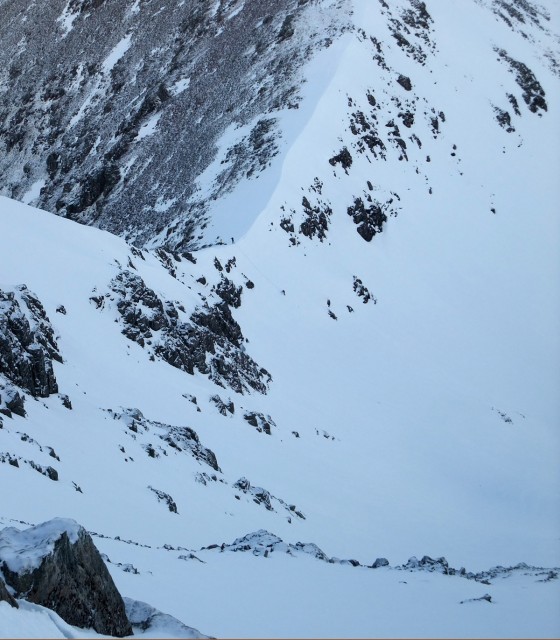 View east from the summit of Bidean nam Bian, finest mountain in the southern highlands?

The route had seen steady but gentle progress as the plan had been to be on the summit of Bidean for sunset – I was a bit early for that but it was getting a little cloudier so a spectacular sunset seemed less likely; not to worry, more time in the Clachaig before the bus home!

'Normal' descent route over Stob Coire nam Beith – a descent into Coire nam Beitheach can be made from either the col at the 907m minor top or 300yd further on at the 850m bealach. Either way is steep but the former has the advantage of dropping into a perfect, uniformly-sloping upper corrie which is ideal for a long, uninterrupted glissade, provided there is ample snow to cover the loose rocks.

Last hour or so of the descent made by torchlight, some tricky sections especially in the dark and if the rocks in the Allt Coire nam Beithach, which must be crossed several times, are iced over. Arrived at the Clachy in time for a couple of tasty ales. Another great day on one of the finest mountains in the land – the first one I've climbed four times and it certainly won't be the last time!

Lovely photos and glad you recovered from your fall. Enjoyed your report. I too came unstuck on Bidean but not in the same dramatic way as yourself. I got to Bidean nam Bian but could not continue due to snow and had to retreat, so still got a return trip to look forward to

Wow, great report Mike216, enjoyed that very much! Interesting variations for me to consider

Wonderful - bumping this. Pity it is overlooked for Frogwell's amazing report but this report itself is fabulous.

kevsbald wrote:Wonderful - bumping this. Pity it is overlooked for Frogwell's amazing report but this report itself is fabulous.