The Grey Corries is a spectacular route by all accounts, if not a tricky route. There’s a number of ways up them and a number of ways off of them, which turned out to be a good thing given the conditions!
An early drive toward Fort William is always a treat. Not least for the wildlife that can be seen at dawn (foxes, squirrels and many herds of deer) but also for the beautiful light of sunrise which today was creating an orange halo around Ben Y Vrackie as I headed up the A9. Despite the recent heavy snow a number of websites were forecasting clear skies and not so strong winds so it was worth the gamble! Heading past Loch Laggan my target for the day came into sight, glistening as if they were made of icing sugar; the Grey Corries.....although more white than grey today. The snow of the previous 24 hours had plastered everywhere, including the road; a stark contrast to my walk up the Corbett Ben Gulabin on Friday when my feet never even touched snow!
My original plan was to do the full ridge, possibly taking in Sgurr Choinnich Mhor for good measure depending on time, and to drop off the north facing ridge Beinn Na Socaich. However, after leaving the car at the top of the Corriechoille farm track at 9:30 it was looking like a bit of a tight squeeze to be honest! The monk looked down on me at the car park and I really hoped he was going to bring me some good luck today! A group of 3 walked ahead of me after setting off moments before me.
I always find it an awkward thing; walking behind someone in the hills. On the one hand I don’t want them to feel like I’m chasing them so I attempt to overtake them and let them enjoy their day, but on the other hand what happens if I’m not moving quick enough and they’re chasing me? So I opted to keep a safe distance back and trundle up at the same pace as their group. Besides, they were making decent tracks through the fresh powder snow for me!
It was a long hard slog from the landrover track to the summit of Stob Coire Gaibhre and really there’s not that much to see. Occasionally the shoulder of the Corbett Cruach Innse comes into view, and the long ridge of Aonach Mor on the other side but the views are not exactly to die for at this moment. I stopped a few times; convinced I could hear a helicopter somewhere close by. This is all to change though as you reach the 958m marker of Stob Coire Gaibhre. When the steep flanks of Coire na Ceannain come into view, with its small lochan at the bottom and the 2000ft drop of Stob Coire Na Ceannain, it is truly awe inspiring. To the south and east sit Cruach Innse and Sgurr Innse beside the deep glen of the Lairig Leacach and beyond that the Eassains. I once lost a camera near Sgurr Innse, just above Coire na Cabaig in November 2009 and I often wonder if it’s still there somewhere in the heather.

I adorned crampons at this point for the ground was increasingly icey, and although the slopes to the summit of the munro looked incredibly rocky, I’d rather this than slip over the edge of that corrie! The wind was quite literally freezing at this point so on too went the down jacket, mitts and liner gloves; then it was on with the long hard slog up onto the 1121m mark. It didn’t seem to take long to get here at all and for a brief few moments the wind died down and I was left with a winter wonderland and my mind began to cast forward to 3 or 4pm when I would be coming off the final section of the ridge. However, this was short lived. For whatever reason, at this point the party that had been in front of me turned around and headed back down which made me suddenly aware that I was now the only person on the entire ridge.
On top of that I could see plumes of snow being blown off the summit of my munro and the next section of the route, although short, seemed pretty knife edge, banked out with thick ice and corniced at the top. I ascended the sharp fin of rock and precariously teetered my way along the top or just below the top depending on how strong the wind gusted. Once I was on it it wasn’t as bad as it looked but with no obvious track to follow I was making it up as I went.

A short while later I clambered off of the last boulder and began a short walk over the summit plateau to the small cairn at the end which marked the summit of today’s munro, Stob Choire Claurigh. I’m sure the summit cairn is much bigger but the snow as surprisingly deep (and soft) on the summit making it difficult to judge. The views are fantastic again, across to Ben Nevis and the Mamores stretched out around you. As if by magic, as soon as I hit the summit cairn the weather took a turn for the worst. The wind was now gusting up to 50mph I’d estimate and the spindrift it was creating was like sandpaper on my face. I put on my goggles and attempted to drop off the summit but took a few feet and put my foot through something that appeared to have no bottom. I clung on with my other leg and looked back; the hole was deep. Next to it was a large crack which also seemed very deep, perhaps around 6 or 7ft. Slumped cornice maybe? If so I was b*oody lucky!
It was decision time, do I continue along the ridge as planned, do I descend the way I’d just come up or do I make it to Stob A’Choire Leith and come off there? I opted for the latter rather than continuing to the end. The change in wind direction had created a ridge which was hard to navigate and corniced on both sides, the spin drift was burning my face and the cloud was rapidly dropping. Freshly deposited windslab was forming rapidly also so all in all, a recipe for disaster!

I pushed to the top of Stob a’Choire Leith, not without difficulty though after falling through 3 banks of snow and making some precarious moves on the icey slopes to avoid the cornices and then started to descend the incredibly rocky slopes all the way down into Coire Choimhlid. Surprisingly, the wind didn’t die down until I got to around 750metres. Whether I was in a bit of a wind tunnel or whether the wind had picked up considerably in general I don’t know. I sat on the icey slopes of the glen and poured out my hot chocolate which was a real pick me up before I tackled the next challenge of the day.
The small burn which would normally be a hop skip and a jump was banked out completed with thick ice, so I descended into the groove backwards, crampons front pointing and moved about 100ft across the ice slope to gain a decent place to cross the burn. Interesting!
From here it was a fairly straight forward, if boggy, walk out. I picked up the landrover track just after the dam at NN239 764 and continued along this, taking the right hand junction later on which is marked with a green topped stake. This walk out does take much longer than expected and it felt like forever that I was walking through dense plantation being dripped on! But alas, I made it back to the car. All in all it was a timely reminder that the mountains are there to be enjoyed but they should be treated with respect always and they’ll still be there tomorrow. There’s no shame in turning back or altering your plans due to the weather, even if it means short term disappointment. Unfortunately after setting off home I heard that the helicopter I had heard earlier in the day had been heading to the scene of a fatality on Ben Nevis. The long route out 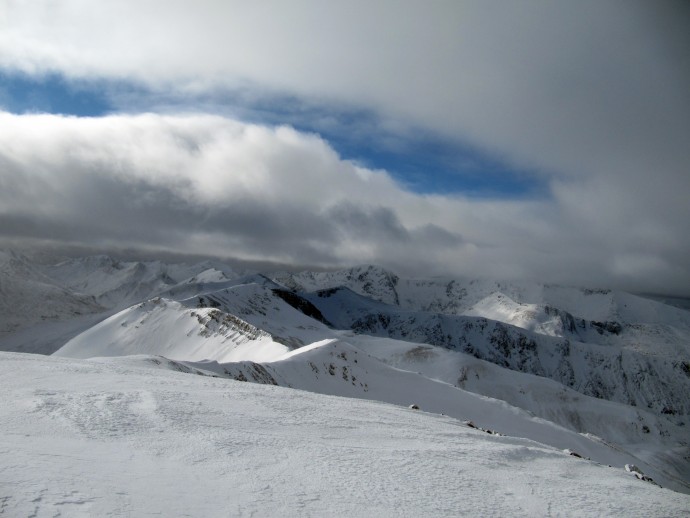 Spindrift further along the ridge 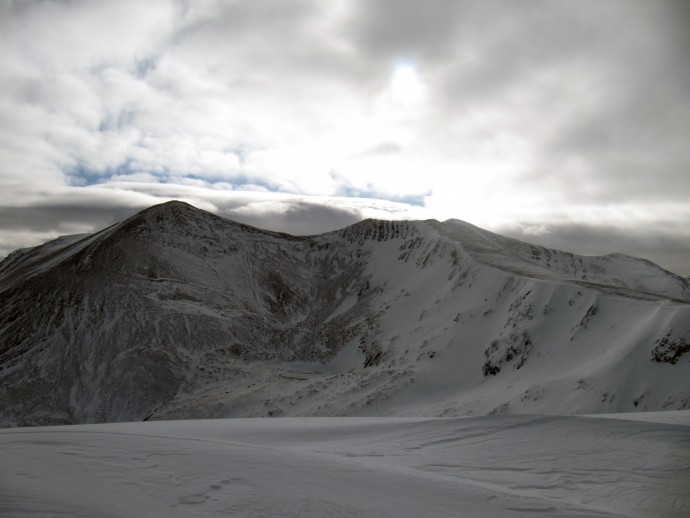 Good report JL. Good Photos and good decision. It sounded scary when your leg went through the snow.

Good report and shame for the poor weather