our_route.gpx Open full screen  NB: Walkhighlands is not responsible for the accuracy of gpx files in users posts
The decent weather continues, so headed off for the Lakes. Not really knowing where to go, the freak weather on the A66 (rain freezing on the road causing umpteen accidents

) the decision was made not to leave the A66 and park at Scales. Set off along the old road, to ascend Souther Fell first. The ground was quite firm underfoot, so the going was not too bad

As I gained height, Sharp Edge came into view. Souther Fell is an easy traverse over short grass, and the summit was quickly reached. 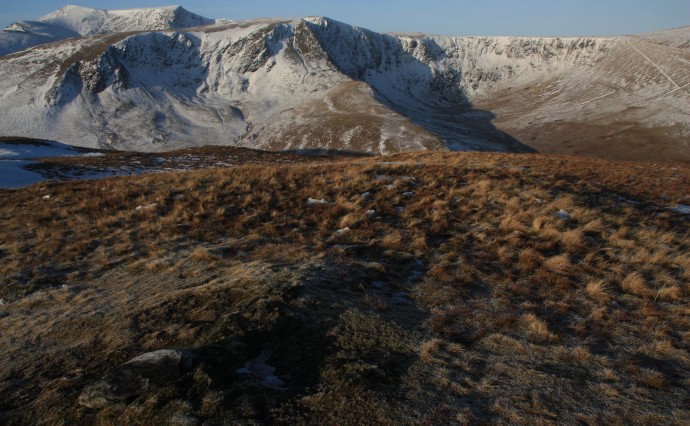 I had to make a bit of a detour to get off Souther Fell, as the ground was so hard, it was quite treacherous. I headed past the bits of crag at the north end and headed down to the River Glenderamackin. I decided to attempt the heathery ridge up to Bannerdale summit. There are some rocky outcrops up there which are just a bit too rocky to negotiate, so I skirted them into the heather, but was quite a nice ascent. Souther Fell from my ascent route of Bannerdale Crags.

From Bannerdale, it's an easy traverse round to Bowscale Fell, and as the weather was still fine, I decided to pay it a quick visit. The Skiddaw range from Bowscale summit.

There was plenty of people headed up Blencathra by now, so I made my way to join them The snow was quite hard set, so walking was pretty easy. Conditions must have been good on Sharp Edge too as plenty were crossing it. My route was a bit easier Sharp Edge didn't look so imposing from its exit. Saw someone I wasn't expecting on Blencathra summit The cloud started building at this point, so I decided to make my way down. The route down wasn't as bad as it looked, and I was soon back at the car, hoping for an easier drive home than the one coming!!!!

. I'm impressed with the route up Bannerdale Crags - I didn't realise they were that steep - almost thought I was looking at photos of Sharp Edge for a second!

Thanks Malky, it was an interesting little clamber, made a welcome change from the paths

A fine winter wander Mamoset with some cracking pics - the cornice one is a beauty, the snowman is awesome and what the hell is with that tarn...weird or what

Cheers Chris, shame we aren't getting as much snow as last year really, makes for great walking and photo's