Yet another delayed report from me. I can’t complain though. The walking’s been good and it’s a busy work that has stopped me from writing up reports recently

I’d had the idea to head to Linn of Dee and have a bash at Carn an Fhidhleir and An Sgarsoch on the Sunday. But this looked a long old day for the Winter, so instead I thought I’d do Derry Cairngorm and, if the weather was favourable, take on Macdui and then descend to Luibeg Burn via Sron Riach. Not a short walk in itself for a winter’s day either, but as I’d been in the area a few times before I was confident of my timings – what with the walk into and out from Derry Lodge.

Well I managed Derry Cairngorm, but the weather wasn’t favourable so no Macdui this trip, as the cloud hung round its summit all day. I’ve always wanted to do Macdui on a clear day, so I’m quite prepared to bide my time and do it as part of a long circuit one day with Cairn a Mhaim and Derry Cairngorm.

The walk into Derry Lodge is pretty uneventful. Long.........and leaving me wishing I was in possession of a mountain bike just to get me to Derry Lodge that bit sooner My target for the day, with a fair covering of cloud :(

When I arrived at the lodge there were a fair number of mountain rescue vehicles parked up. If not on a training exercise then I assumed it was a continuation of the search for the poor chap missing round the Courror bothy area. Throughout the day I’d also heard the rescue helicopter whirring about somewhere in the distance, but never in view. View from just off of Derry Lodge Route ahead, although it got a bit icier as the path headed up to the right at the crags

I’d been having a problem with repairs I’d carried out on my right boot a couple of weeks earlier, which was now giving me real jip. So once I was over the styles and on open hillside it was time to stop and effect some emergency repairs. Once these were done progress was so much easier. Why oh why hadn’t I stopped earlier to do this

Once on open hillside the good path continues. Eventually it became a bit “occasional” for me in places, but that may have been down to the snow higher up making it less than obvious. The route was obvious though, so that was all for the good. View back to Glen Lui And again, a little higher up Looking back down the path I was walking. A little higher up and it was soon getting buried in the snow In the Lochnagar direction As I got higher so the cloud seemed to drop down lower and the views, as they were, became fewer a further between

Macdui looked like it was definitely for keeping itself well hidden from me sadly. Also higher up the rocks became bit more slippery and the slope a bit steeper (but never steep), which made progress a bit slower. I was keen to make sure that I didn’t end up with a broken ankle or anything picking my way through the rocks, so foot placement was crucial The route ahead - path showing to the right of the shot

Then I had one of those moments when I arrived at a cairn!!!!!!!!! Thought it was the summit and was sitting there rather smug at my time to the summit, only for the clag to clear and show me I had further push to the summit

A short while later, slipping up the rocks, and I was eventually at the top. Views were still hampered by the cloud, but for a brief moment it looked like the cloud might clear and I might get to do Macdui, but after about 15 minutes I gave up as more cloud seemed to roll in Shortlived though, as the clouds rolled in behind me :( :( Sods law though, as on the way down the cloud did break giving good views to Beinn Bhreac and also toward the Cairnwell hills, but never over Macdui View to the forest of Mar 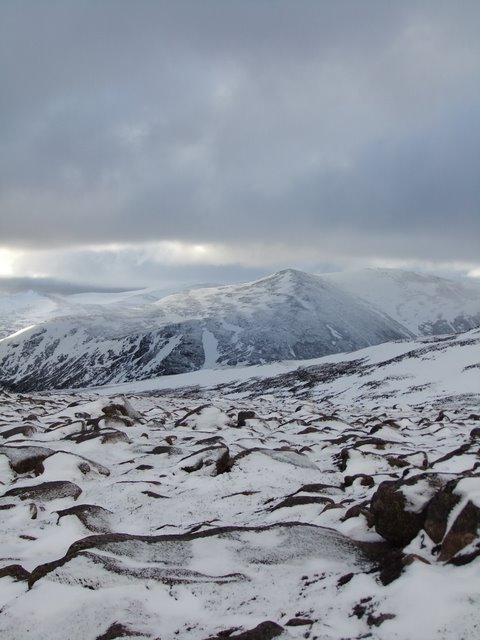 Not a snow storm I'd like to be in.......little did I know what would be dished up later

The trip down was a reverse of the route up, albeit I decided to visit the minor tops on the way down. Got some nice views to Bynack More. Just passed Carn Crom and the snow started up. As much as I was quite enjoying it the thought in my mind was the long walk back from Derry Lodge and the drive over the Devil’s Elbow

Let’s hope the snow had stopped by then On the way back I was offered a lift by one of the MRT crews, but I’m a car-to-car walker so politely declined the kind offer

Eventually arrived back at the car and was soon heading back up the road.

Unfortunately the snow was on again, this time heavier than when I was on the hill. Did I enjoy the trip over the Devil’s Elbow

I can only apologise to drivers behind me

All in all though another good day out on the hills

Another enjoyable report there PeteR, sounds like things are good for you and glad you enjoyed the half-term hols, nice letterbox shot.....

Nice stuff Pete and some lovely pictures, especially the latter ones. Really like the shot over to Forest of Mar and the one looking back down the ascent ridge onto DC.

Glad to hear your absence from the site was due to you having fun with your boys- any chance they will be joining you on the hills in the future?

PeteR wrote:Yet another delayed report from me

A great report, really enjoyed it and some fantastic photos, Pete

Good report again pete,how long did it take you roughly?Missed out on Derry twice on our 2 visits to the cairngorms so hope to get up there in spring,maybe try and tag Beinn Mheadhoin on along with it

Enjoyed the report and the photoies are nice, the rocks sure do look slippy on the way up

I done the DC and Carn a Mhaim route, the traverse over the cliffs being the highlight onto Sron Riach
We had a military helicopter flying at same height about 100m or less with the soldiers standing in the doorway laughing as we slipped and slid across the cliffs

Enjoyed that Pete hope you MacDui it the next time

Great report as always Pete, some cracking pics of a lovely winter wonderland....If you want a tip for driving at night when its snowing simply put your main beam on and drive really fast.....its like being on the starship enterprise, you'll love it

The Carn a'Mhaim, Ben Macdui, Derry Cairngorm circuit is a great day if you get halfway decent weather. But at 33km cycling to Derry Lodge is a must if (like me) you are pushing 50+.

Great stuff Peter. I haven't got stuck into the 'gorms' yet, but will be re reading when i do

Bod wrote:Another enjoyable report there PeteR, sounds like things are good for you and glad you enjoyed the half-term hols, nice letterbox shot.....

Cheers Bod. Things certainly are good, but hectic. Hoping to get out sometime this weekend, but not looking to hopeful for me at the moment

Thanks rockhopper. Got to admit I was pretty chuffed with the view back that way. The weather seemed to break that side for a while and give me some descent views