We arrived in Glen Feshie on Friday evening, expecting the weather to be pretty poor on Saturday, given the weather reports, of snow and gales. Perfect weather for a Munro! So given the weather reports the chance of doing the 2 Munros on this side of the cairngorms were pretty slim (sgurr Gaoith and McaB). so with the wind direction coming from the NW it was decided to try and choose a route where we could get some shelter. The decison was to go up Mullach Clach a' Bhlair (McaB) via the Coire Garbhlach.

We started off at the carpark (850984) and walked down to Auchlean farm. The fresh snow was several inches deep at that point. At the farm we kept left, heading south along a small track. We could see our destination in the distance. 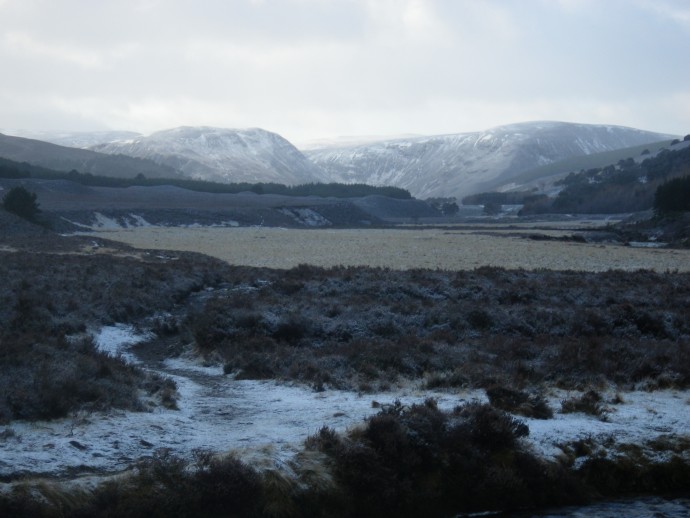 Coire Garbhlach in the distance

To enter the Coire we had to leave the track and head SE over the heather. there didnt appear to be any obious track to it. Maybe it isnt a popular route? 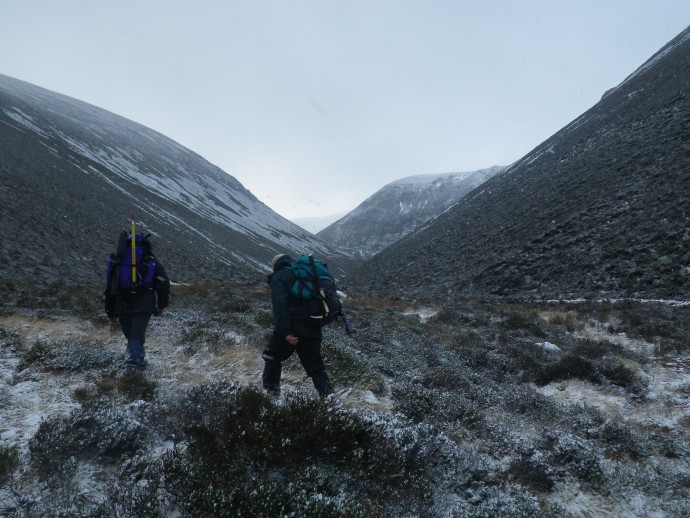 We followed Allt Garbhlach, which required jumping over and criss-crossing several times to find the best route up it. After about 2.5 hours of walking we came to a waterfall. 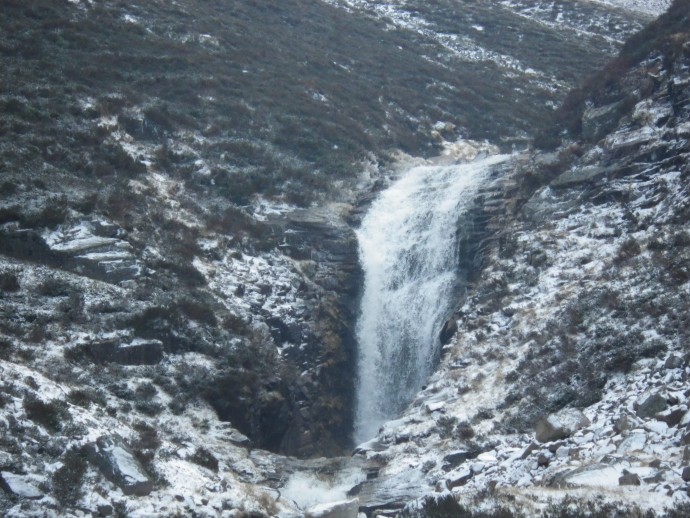 The Coire got more interesting and scenic as we carried on. It really was a bit of a surprise. 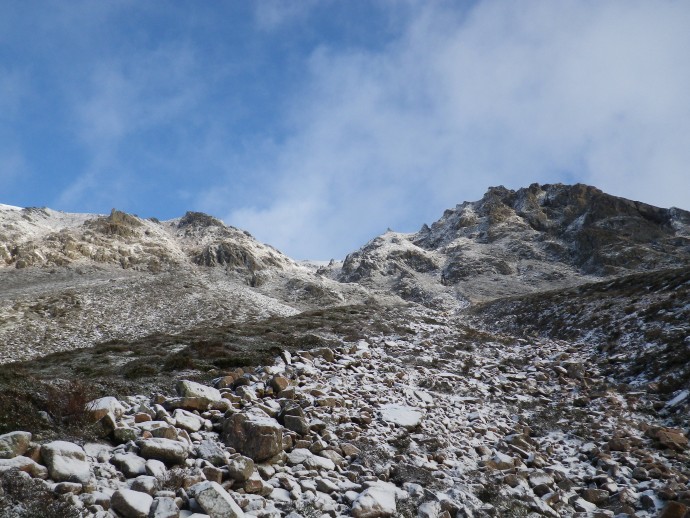 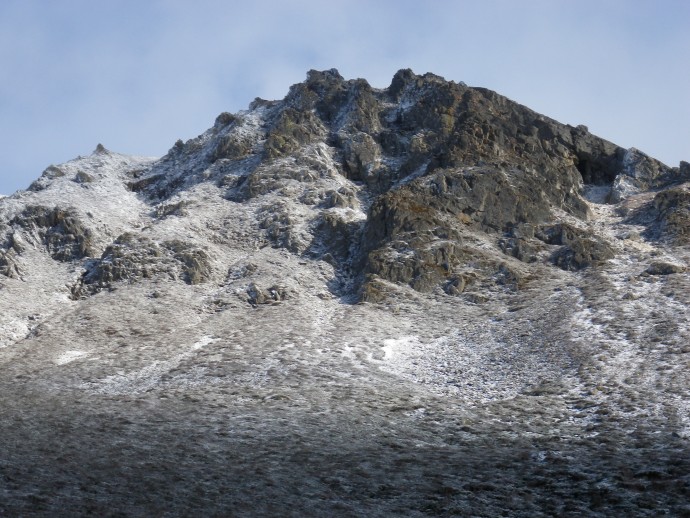 Further along in the Coire

The good thing was our plan was working as we were sheltered for most of the way from the wind, and it made a plesent walk. Eventually we reached the Coire wall (885944) and realised we had already climbed to 600m without even noticing it as the climb was so gradual. I guess this was where the real climbing started. 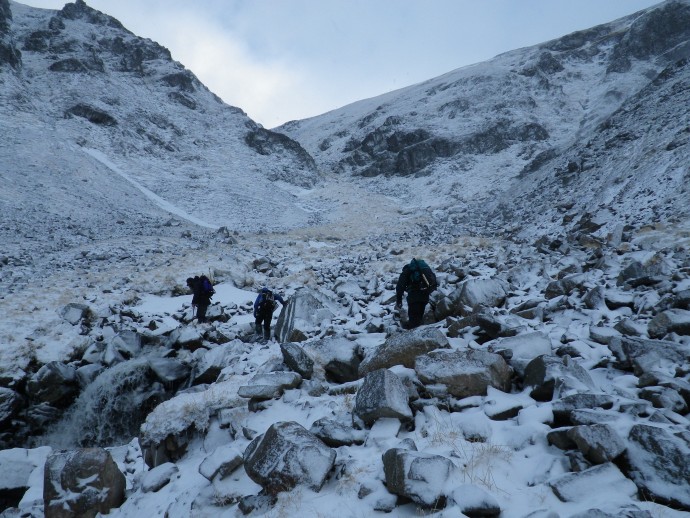 Start of the real climb at end of coire 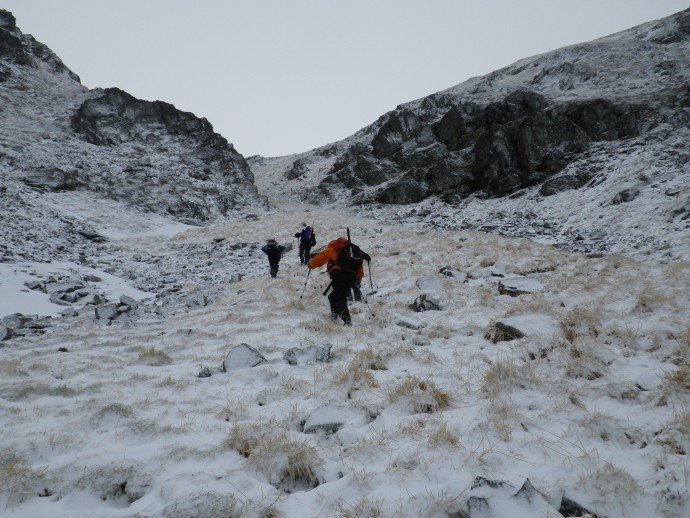 It was a bit of pant to get to the top, but after 1/2 hr or so we had reached the plateau. Although the climb up was steep it wasnt scrambly. 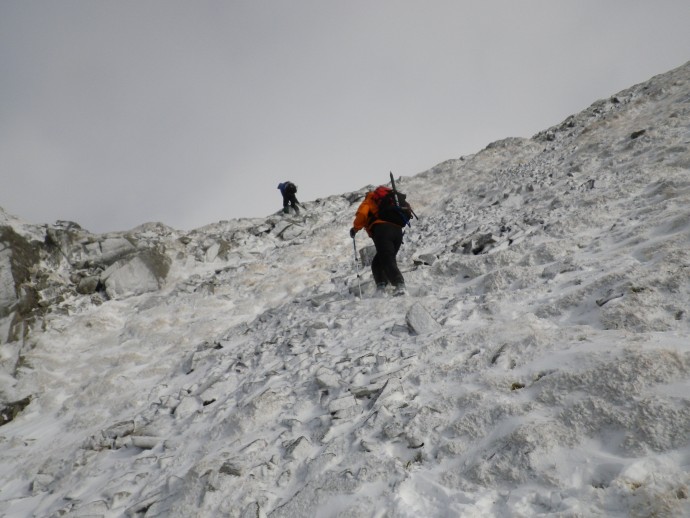 At the top we were greeted with good views of the Coire and the surrounding hills. this was going to be the last view of the day! 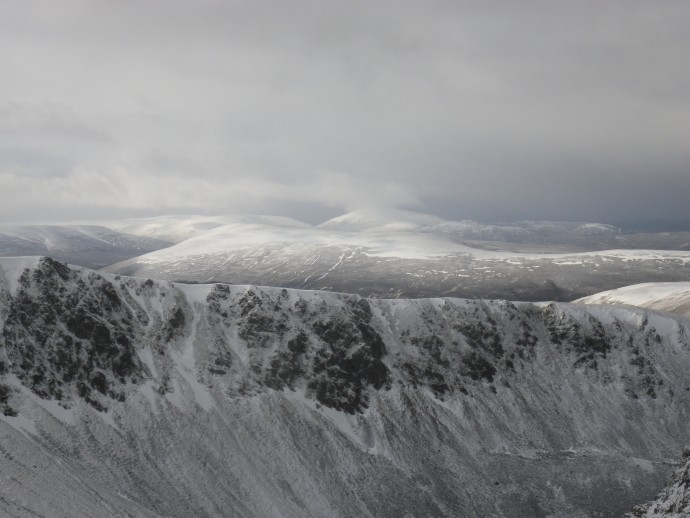 Views from the plateau looking back from the coire

we started to head south to head to our goal over the plateau. 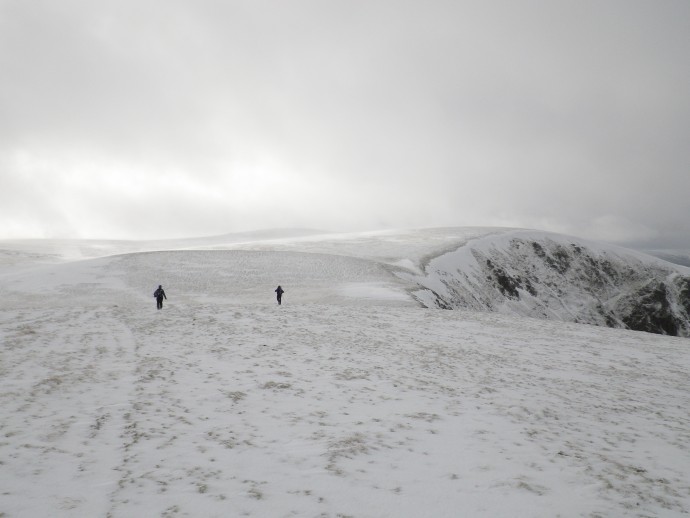 Across the Cairngorm Plateau towards MCaB

Within 15 mins, the expected weather and gales hit us! What can only be described as a snow blizzard came in from the NW. 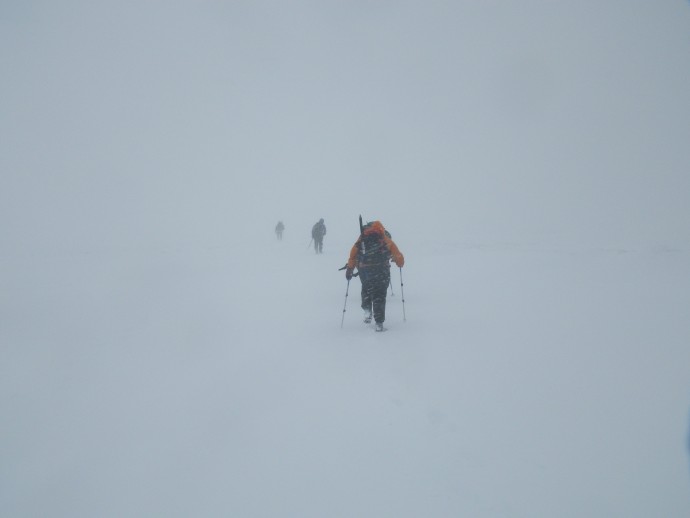 This made navigation difficult as we lost visibility. I also experienced my first real feeling of a 'white out' where for about 5 mins, i was cocooned in a white bubble, where i couldnt distinguish the sky from the ground and lost all visibility of the rest of the party. It was such a strange experience to lose all track of your bearings and visibility. a bit frightening at first, and a tad clautraphobic, but good to experience a true white-out feeling, rather than the normal snow blizzard (which I had previously thought of as a whiteout! Now I know!) However I eventually walked out of it and got back to the main party.

After taking a GPS reading, and taking a bearing from that to the top of McaB, we eventually reached the freezing summit after 3.5 hrs of walking. The rather uninspiring top was no place to be hanging around. The decision was made to get off the mountain the best route possible as quick as possible as the weather was getting worse. So we took a bearing North and kept an eye open for the track that head north and then west down to the glen. as you can see the weather was a wee bit windy! Heading down the track

so often, I pack the snow goggles but never make an appearance. I was glad I had them this time as my eyelids started to close together! We were finally greeted with an interlude to the bombardment of gales and snow for about 10 mins as we approached the glen and managed to replenish our energies and take a bit of lunch. When we got to the glen we followed the track north for the long 6km trek back to the car park.
All-in-all, what made this walk good was going in through the coire. the thought of using the track to climb the mountain and come back the same way would have been a tad depressing, and certainly the weather made it an enjoyable (if not freezin cold) day out! Next time, pack warmer gloves!

Garbhlach is a fine coire maybe more often frequented when Meall Dubhag was on the list of the chosen ones when the wee side coire? of Fionnar was a good way up in winter.

That sounds like a great walk...you were lucky that you managed the first part in good weather. I havent experiences a white out on a hill (but I guess it would be an interesting experience) Reading about sky goggles I really need to buy a pair...I have been in a few conditions when I really wished I had them...guess they woudl be handy in really bad rain as well

Yeah, if you keep to the right, its a bit steeper,but no difficulty. We did see some track along the route but it wasnt obvious, and it was just as easy to make our own route following the river. The route up fionnar looked less steep, so might do that way next time.

Yeah, goggles are always in my pack in winter, when u get get driving horizonal sleet/hail, it becomes a god send! I guess in the rain they would work to, but your next problem would be vision and tripping over yourself!

An interesting route followed by an interesting day. Looks wild in those last few photos, adds to the fun though

Enjoyed that seamus - good weather to start with but somewhat changeable later on....Looks an interesting route approaching via Coire Garbhlach - I can remember thinking about this way but deciding against it as the clag was down and I couldn't see into Coire Garbhlach so I took a more direct route SE up over Meall nan Sleac - think I prefer your approach and the views you got - cheers