Drove past loads of hills on the way & most of the snow had gone, brought crampons & axe so here's hoping. Loads of room in car park but just after I arrived a few cars & minibus pulled up, they were all in the same group.

Path leads down to wooden bridge then up left hand side of burn. Further up there's the box canyon, then a plateau with Stob Coire na nLochan covered in snow(!) behind: Path further up, there's a bit of scrambling to keep you interested. And with all the melting snow & rain the sound of gushing water is pretty loud. Cross the stream to the right before the big rock. Group of Geordies on the path across the stream, today was the most wintery day they'd had all week. At this height the earlier rain had turned to snow: Approaching the plateau with some wintery hills behind:

WH route suggests heading right for a low part of the ridge, plenty of climbers were taking the direct route instead. Looked pretty steep so I went right Here's the easy bit I made for, as you can see weather was changeable today. Snow was icy here & parts looked as though there had been avalanches. Looking down to the flat bit with the today's ridge in background: Got steep towards to top so nae photies. No clear path, was very rocky going towards summit. View of Glencoe: Climber nearing the top of gully. What's the etiquette here, ask if they need a hand or pelt them with snowballs? Wasn't going to make a faux pas so proceeded in silence. 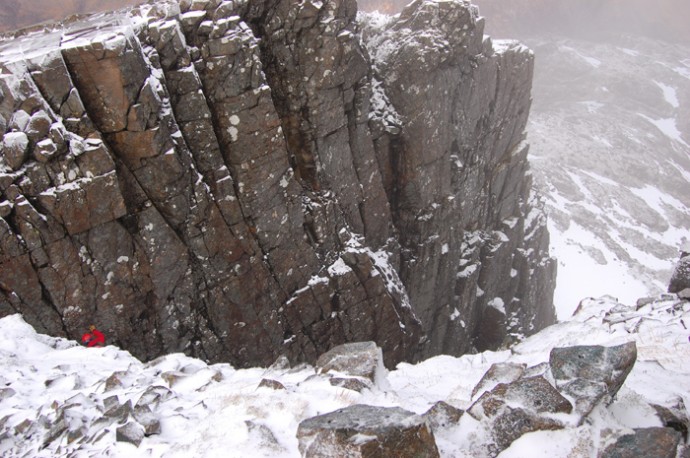 Rocky road to the top: Next bit, over to Bidean nam Bian. Wind blowing snow felt like needles in face. Couple ahead decided to traverse from bealach rather than head to summit but thought I'd give it a go. Was very blowy so I went right and climbed up rocks instead of being blown about on snow. First 'interesting' decision of the day, it soon got v. steep and snow was icy & hard to kick steps. Here's where I came up, wasn't getting near edge again! Onwards, still getting blown about: Beinn Fhada with Buachailles behind: Near whiteout at cairn so camera didn't come out, soon cleared up though: Here's the point of descent according to WH route. Very steep snow over the edge of cornice so care needed. Thought about walking down Beinn Fhada instead but looked pretty craggy on map: Second Munro of day with Aonach Eagach behind: Ridge up to here: Back to bealach & over cornice, was improvising reverse front pointing crampon technique, but got knackered so slid down on bum instead. Looking down to Lost Valley, path is pretty high up on left of burn. Met 3 guys from Glasgow after the valley, we were looking for a place to cross the stream. Found some rocks behind a dead tree lying across burn. They had been watching my fancy crampon shenanigans with interest as they'd bumslid immediately. Apparently they'd met with disapproval from guided groups as they didn't have crampons & axes but had no probs on hill.

Excellent day out, varied terrain & weather and the walk back through lost valley was pretty atmospheric with shadows coming down.

It was good to see this route with snow on it. I was up there in the autumn just the snows had arrived. Ice and snow fairly changes the whole character of a mountain route. Your "reverse front pointing" sounds impressive - but the bum slide sounds much more fun!