This was to be the first two Munros of 2012, but it never turned out that way.

Sunday 18th of February was looking like being a good day so it was up early, 6.45, and on the road by 7.30. got to the lay-by just outside Crianlarich by 9.45 and were kitted out and we were on our way.

The first obstacle of the day, apart from the boggy field between the lay-by and the railway, were the cattle that had decided to cross the bridge and go up the track at the same time as we did, managed to move most of them away but the last few would not budge so we had to take a detour of the track and around them. First mistake of the day going was going right past the gate and up the track, but not to far, so it was an added walk back to get on track, although there wasn't much of a track to speak of, we just headed in the general direction, up. the few back down

As we climbed higher the temperature dropped lower and lower. further up we did come upon a track but we still managed to go astray a couple of times and found ourselves on an icy slope, which we carefully crossed with the aid of our walking poles, to get back on the track. (we now have crampons for these situations). eventually we reached the summit, the decision now, go on or go back, good sense prevailed and we decided to go back,
conditions ahead looked worse than we'd already gone through. On the way down we met 3 seperate groups of different sizes who we had a quick chat to about the conditions further up and that we had decided not to continue, and when we looked back on our way down we could see some people on their way down. 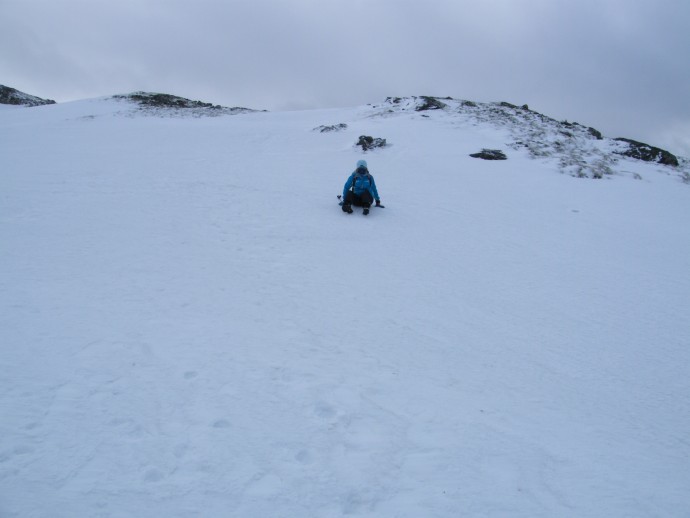 mrH taking the easy way down

Thankfully when we got back to the bridge the cattle had left so there was no detours required, but still had to trudge through the boggy field.
Now all that is required is to return someday and complete the pair.

The hills WILL be there another day!

A nice walk, think you did the right thing by playing it safe, good weather is on the way and you can bag many more hills soon

Some nice photo's there

And you done the right thing by going back well done again.

Really like this area and you definitely made the right choice to bag just the one in winter conditions without crampons. The dropp down off AC and then the climb onto BC are quite steep and if icy would be 'uncomfortable' without the right equipment regardless of the conditions.

I see the cows are still causing mischief then. I met them at the underpass once and two of them refused to budge, so I had to walk between them

They're a bit of a phobia of mine - big, lumbering stupid creatures in my view. But I wouldn't want one of them taking a fright and knocking into me

....as for cows a nice piece of Alkathene pipe or a stick on their tons will shift them