An alternative (and much shorter) route for Sgurr na Stri.

Having finally decided that Lower was Better as far as summer views in the UK were concerned, we decided that rather than get to the top of Blàbheinn and see nothing, we'd get to the top of something much smaller, and hopefully see something, and Sgurr na Stri showed much promise, being "amongst it all" in the Cuilins, yet only 500m high.
Because we were heading off the Isle of Skye that day, we didn't want to do the 9 hour round trip from Sligachan, and so devised our own route (not having any resources with us apart from a the map and a hint from the Walk Highlands description saying that you can get down east from Sgurr Na Stri having walked a few km north).
Having flagged down on the side of the road someone who might be knowledgable (okay, they were kayakers, but one of them had done SnS from the east side only two years previously, sans kayak

), we firmed up our plan. We were going to
1) walk in from Kirkibost via Am Màm and Camasunary,
2) ascend over the flat at 505185 and then via the western gully on the southern end.
3) descend east via the route hinted at on the Walk Highlands notes
4) reverse part (1) 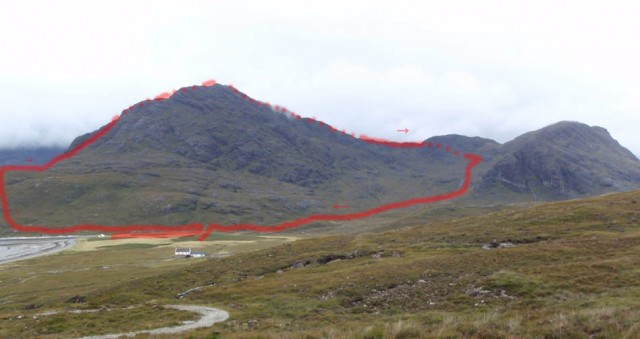 Route diagram once you've got to Camasunary.
(Steps 2 - left side - and 3 - right side)

1. Kirkibost/Kilmarie to Camasunary and crossing Abhainn Camas Fhionnarigh.
Drive south through Kirkibost and park in the obvious car park that appears on the left as you round the left bend and start driving up the hill. (Apparently Jethro Tull's Ian Anderson had a shack around here). The trackhead is opposite, and heads west. It is a vehicular track, and solid underfoot for the most part, with a few shallow fords that are easy to tip-toe over. A very pleasant view of Camasunary and Sgurr na Stri is to had from Am Màm, and it is a good opportunity to have a good look at the gullies on the southern end of Sgurr na Stri. 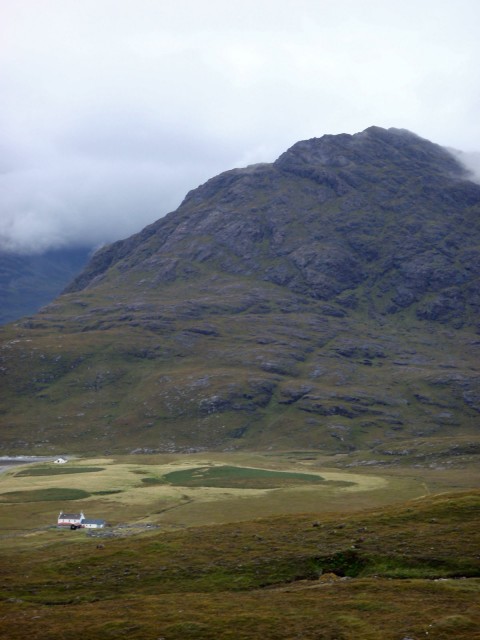 The Abhainn nan Leat which drains south of Blàbhienn has some nice gurgly bits you can listen out for as you descend to Camasunary. The deserted building - reached after about an hour from the start - is interesting, and soon, after plodding over some softer, damper soil, you find yourself at Abhainn Camas Fhionnarigh, the outlet of Loch na Creitheach. The bridge had obviously disappeared a while ago. Except in spate or king tide, however, it should be passable with a shallow wade.

There are several shallow crossings to be found as you head north from the decrepit ex-bridge. We only got knee high. Some may choose to take their boots off for this, but we didn't, so as to have surer footing on the stony river bed.

2. Abhainn Camas Fhionnarigh to Sgurr na Stri.
Whilst this part of the route is not exposed, it may become subject to erosion if many people take it, so you may choose to do a reverse of step 3 to ascend instead. Also, it would be unwise to do this route in anything more than light rainfall.
You can either head directly north from 505181 (suggested by another walker), or strike west from further east, but either way, make your way up to the flat top at 505185. From there, strike diagonally up north west to the westernmost of the two gullies. If you are lucky, you may find the odd steps or two from a very faint path. These become more obvious as you get nearer to the top. Also on the way up, you may pass some unnerving pieces of aeroplane and contemplate the saying about lightning not striking the same place twice. The ridge in between the two southern gullies eventually recedes into a small depression about twenty metres below two "summits" (east and west) of Sgurr na Stri (my GPS made these out to be only two metres different in height - the westmost the higher). It is an easy slab scramble up to either, and both boast fantastic views, but slightly obscure each other. The eastern peak has broad views toward the mainland, and the western has the legendary stunning view of Loch Coruisk and the Black Cuillins.

The view east from Sgurr na Stri is amazing even when you can't see the Cuilins.

Click for larger view
This took about 1 1/2 hours from Camasunary.

3. Sgurr na Stri to Camasunary and then Kirkibost.
Head north following the gully between the two summits. There is a track that will become more obvious. Keep to the east as the eastern of the ridges comes down to join you, but stay high until you are more than halfway to Sgurr Hain. At about 499201, there is a track that traverses down on an angle to the top of the northernmost gully of the basin that drains the eastern side of Sgurr na Stri and its saddle to Sgurr Hain. This track makes the steep descent at the top relatively easy and safe. The path, indistinct at times and soft at other times, generally follows the northernmost large stream as it decends to Abhainn Camas Fhionnarigh. Choose an appropriate place to cross back over and head back to Camasunary (about 1 hour descent), and thence back to Kirkibost/Kilmarie via Am Màm (another hour). 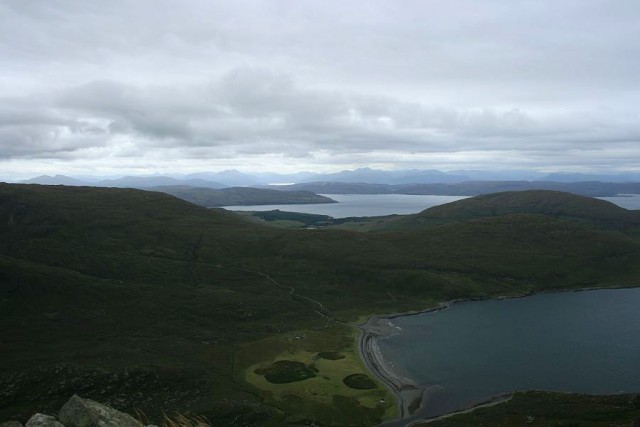 Camasunary and the walk out, from Sgurr na Stri

And a few more panoramas

Cheers Andrew - this looks a top idea and we will implement it as a route. Unfortunately we won't feature the GPX file as we only offer route downloads which are based on on-the-ground recordings to ensure the best accuracy, but I'm sure we can come up with something (or I may do the route this winter!)

Hey, I may have it on my etrex (well, from west of the river...) if I can find a computer with a DB9 serial connection.
A modern day conundrum. Old GPSs and modern computers...

End May, a friend and I want to hike to the Sgurr na Stri. I have found on the "normal" route from the Sligachan hotel southwards to the top.
In the posts here AndrewP has suggested an alternative, which starts from Kirkibost/Kilmarie. This alternative is a bit shorter en makes a loop, which is more interesting than the normal route. Therefor I am interested in this alternative route.

My question is : is this alternative route a real path ? Or is it looking for your own way ? (I am aware that this hike is challenging ; I am an experienced hiker)

thank you for your information,