Corbetts included on this walk: Sron a' Choire Chnapanich


Set off slightly later, leaving the car at 10am at Giorra Dam heading towards Stuchd an Lochain. The top was in the clouds and it rained most of the way up (turned to snow at the top), although there was a path all the way. Left the ice axe in the car (again!) but only crossed one small patch of hard snow/ice. Closer to the top the wind picked up just to make it a bit more challenging 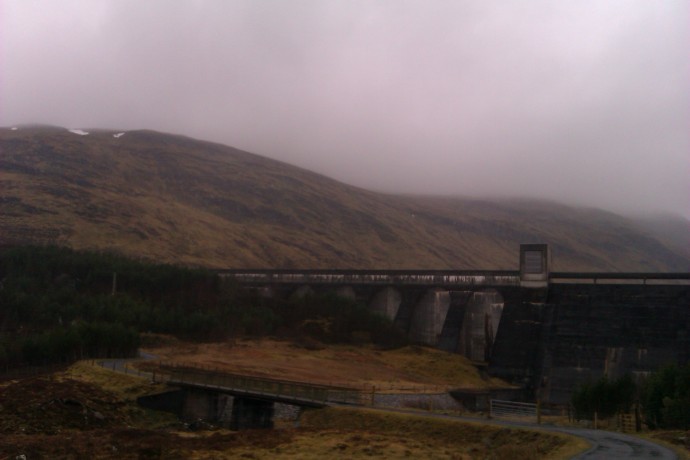 Stuchd an Lochain in the clouds from starting point 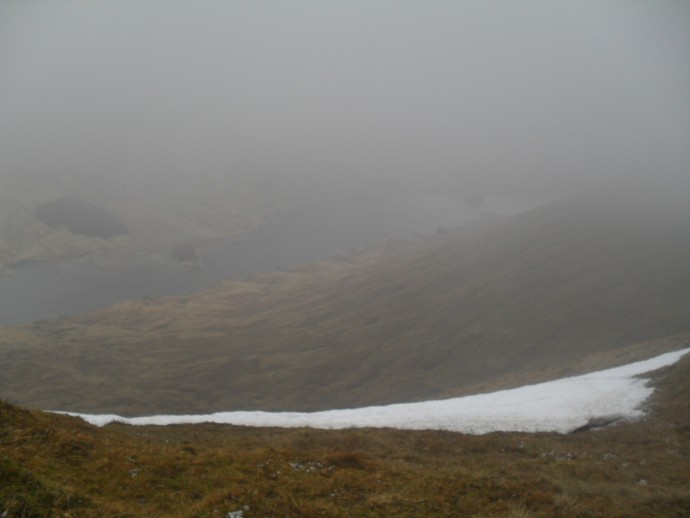 ascending Stuchd an Lochain looking down through clag

Didn't hang about at the summit, even for a photo, but carried on parallel with Loch an Daimh to find a more sheltered spot for lunch. Clouds moved around quickly, making views come and go as if they were stage curtains, until they pretty much cleared and the sun came out as we headed across the pathless, marshy, peat bogs for the Corbett. 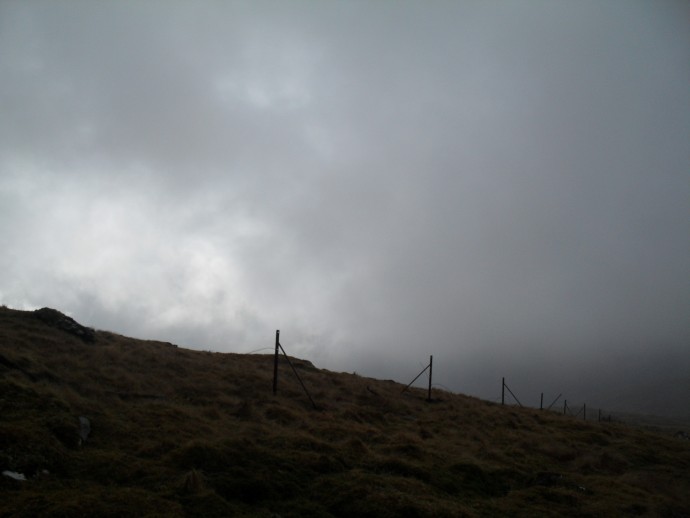 sheltered from the wind 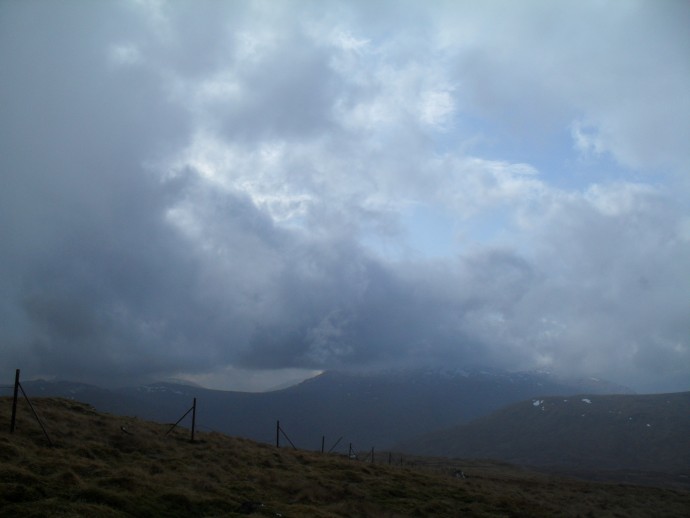 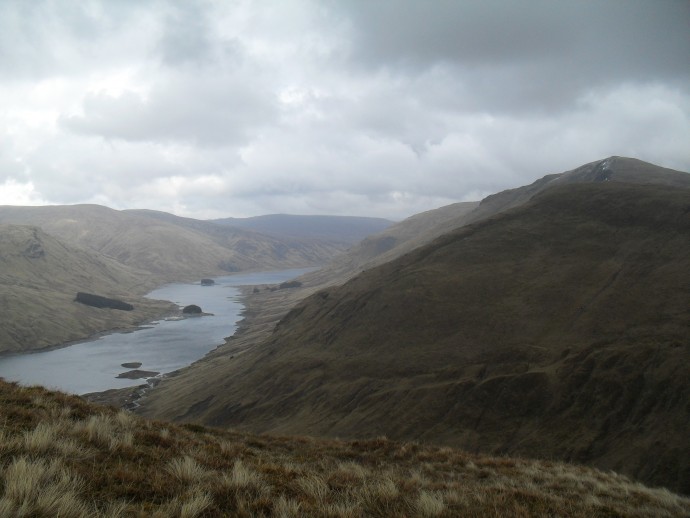 heading up the Corbett looking back to Stuchd an Lochain 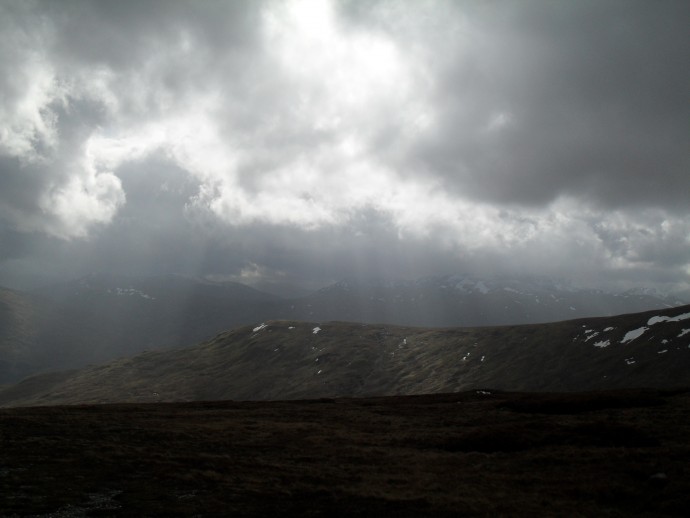 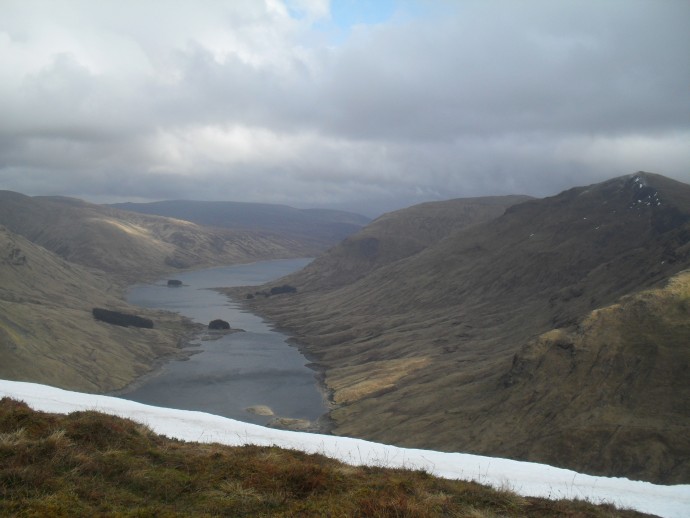 The wind wasn't so bad at the top of the Corbett, but I hadn't quite appreciated 'picking up' the next Munro meant heading back down to the loch and starting the climb all over again

Still no paths on this hill, so it just meant going straight down, across the flat at the end of the loch then heading straight back up the other side... 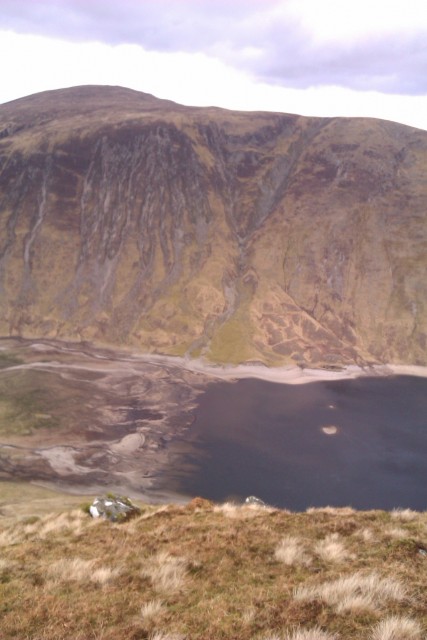 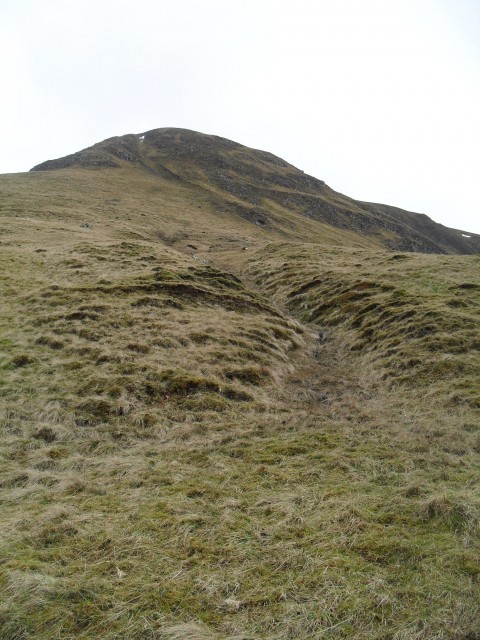 Luckily my brain hadn't quite registered the <3hrs sleep I then had before setting off on this outing!

Choosing to see the next Munro as the way back to the car (so close anyway, no point in even considering the easier option of walking back along the side of the loch!) The start of the final ascent was really tough though! Very steep, no path, through patches of heather, and the rain came back on 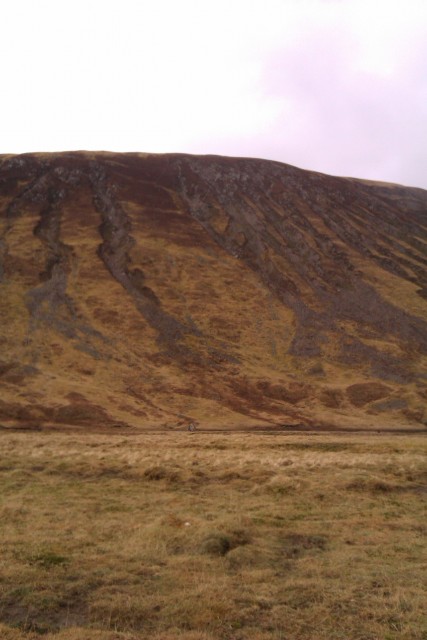 heading straight up the middle 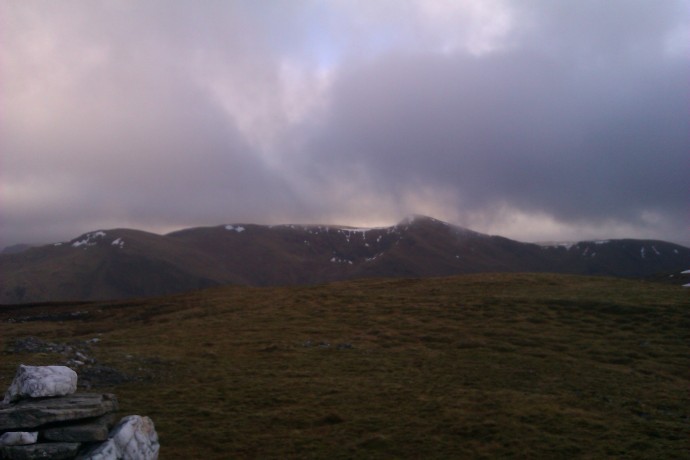 Must have been close to 5pm when we reached Meall Buidhe summit. The clag was back and the wind was up again, so we quickly headed back towards the car at the dam. The path disappeared after a short time but it was straightforward, although very boggy, getting back down. Made it without head torches but by the time we were changed and ready to drive off it was nightfall. HUGE sense of achievement with this mammoth outing but I was definitely ready to go for a Lyon down!

Looks a bit dreich indeed! I love Glen Lyon, never done any proper walking there though so this is really useful and interesting to read. I love the pic where the sun's rays are shining through the clouds, really nice.

Good going.
I've been meaning to get round to this walk for ages. Looks much better than doing the Munros from the dam.
Enjoyed the report.

Well done - great result for the conditions and time of year

Seems much better than the usual up, down, up down for the two munros - cheers

It sure is a big walk, plus the bog when you start to go down Stuchd an Lochain then round to the corbett
goes on for ages, done the same route as you last year.

good report Fi.
As has been said makes a nice round rather than bagging both munros from the Dam. Looks like a tough ascent up the second munro

Epic indeed. Great report. We were almost heading to these Munros yesterday but decided on something a bit closer to home. We were just going to do the both from the dam,but this route adds that bit extra. Will keep this in mind for our visit.

Well done for doing these in that weather

Have your boots dried out yet

Thanks everyone! Definitely recommend this route over doing the 2 munros from the dam - just get a good rest the night before

Still using the gortex liners Scoob - my feet stayed dry! Boots will be dried out in plenty time for this weekend

A grand report that, and a big day out for the time of year

. I have my eye on this one for sometime in the summer - don't think I'd tackle it in March though or I'd definitely end up walking home in the dark

! Very useful to have the photos of your route down and back up at the end of the loch - it looks a bit steep, that.