g34.gpx Open full screen  NB: Walkhighlands is not responsible for the accuracy of gpx files in users posts
I drove up the previous day and stayed in a b&b just 5 minutes away from where I’d be walking. The b&b was basic, more like a barracks, but it was clean and the shower was good. Tuesday evening I bought a fish supper in Bethesda and bombed along to park at the foot of Tryfan to eat it. Mountains, sunset, a surprisingly quiet A5, fish and chips, ahhh………

Routes that I’ve read do this walk clockwise so I went the other way, partly to have the strong north east wind behind me much as possible. I parked at the side of the A5 just east of Tryfan and walked along the old road parallel and south of the A5, then crossed the A5 and went up the track that leads to Tal y braich. After about 300m a signpost marks the start of the path up Y Braich. 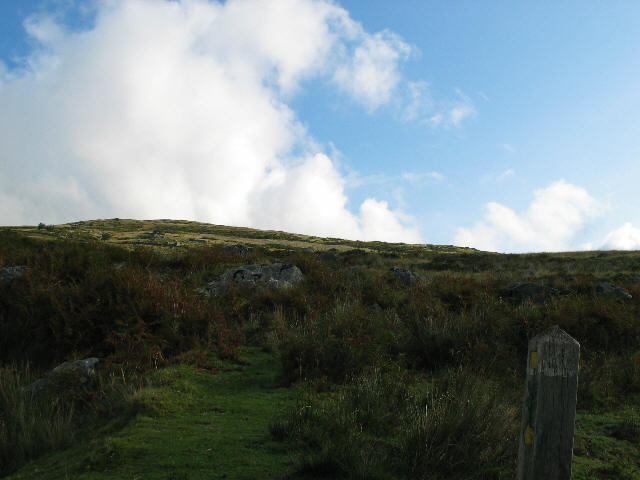 start of the Y Braich path

The path goes in a rising traverse to the north east for just under 1km, this gives an easy start to the ascent with only 100m height gain, it is a bit wet and indistinct in places. A bridge crosses the leat that feeds Llyn Cowlyd reservoir to the east and is a good place to stop for the views that are now opening up. The way now turns north and gives a gentle ascent on a good path, rising 450m in 2km to the top of Pen yr Helgi Du. If you prefer the easier end to your day, go clockwise. I had hoped that the clouds would lift but this was not to be, the cloudbase stayed at around 800m all day, so into the clouds and to a murky summit. No point in lingering here so along the path that now heads north west. There is a small cairn then a section of delightful, fairly narrow ridge with good drops each side, steeper on the left. The path descends to a bwlch at around 700m and offered some enjoyable mild scrambling. 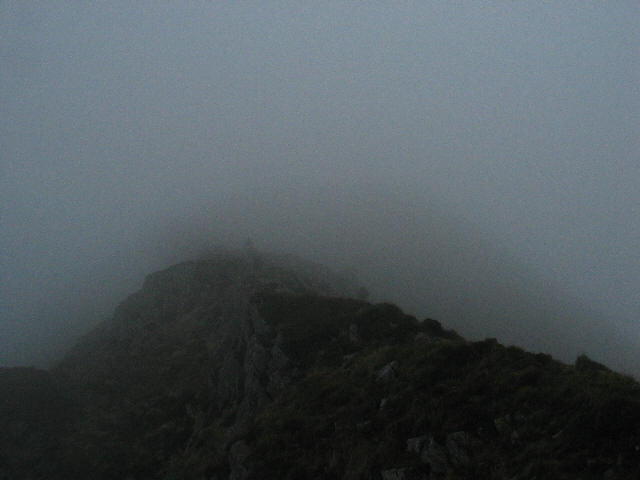 nice ridge in the murk

At the col I passed 6 chaps having a stop, I asked if the bit of bright red rucksack strap that I’d found belonged to them, ‘no’ was the answer. I went on a little way then stopped for a snack, looking down at the occasional glimpses of Ffynnon Llugwy. I’d had breakfast but was already starving so had half an Oggie (Welsh miner’s pasty, but twice the size of the Cornish variety and tasted even better). The 6 guys passed by, then a little later one of then came back to claim the bit of rucksack strap for his mate, good of him since he’d had to climb down then up again! I watched him disappear into the mist. The path now ascended across rock then turned to the right and ended. Given the mist was thick here I hadn’t been able to see what was coming; there is a rock buttress to get up. There’s probably many ways but I followed the obvious line up slabs in a corner, not at all difficult but great fun and unexpected. One of those places you’d like to go back to and explore a bit, especially if you can see something. The fun section soon ended and was followed by a further 1km of walking to Carnedd Llewelyn, no views on the way at all.

Yr Elen is not on a natural circuit so requires an out and back trip, but I was keen to go there having seen photos and still hoping for the cloud to lift. I used the compass to make sure I was on the correct path and did get a glimpse of this fine hill on the way to it. The path drops fairly steeply to a bwlch before rising to the summit, near the cliff edge in the latter stages. Here there are occasional pinnacles jutting out into the cwm. Standing behind one of these out of the wind it was completely still, just a few yards away the wind was noisily pushing cloud up and out of the cwm, marvellous to experience. I waited a while at the top and got a few glimpses down to Ffynnon Caseg but not good enough for photos. Back down to the bwlch where I decided to go off piste and cut the corner off back to Carnedd Llewelyn instead of using the path. I was pleased that the compass work brought me just a few metres north of the cairn. Then a compass check to make sure I was on the correct path heading south and later east to Carnedd Dafydd. Although the path passes close to the edge of cliffs this next 3km to the summit was probably the most unexciting of the walk simply because the path was easy and there were no views at all. At the summit the cloud finally lifted slightly giving hazy views to the south. The last peak was in sight now with a straightforward path for the 1.5km to the summit and views down to Ffynnon Lloer. I had been looking forward to the descent from Pen yr Ole Wen and it was not to disappoint. Down the east ridge and then south alongside the Afon Lloer. There is a path down the ridge but is not shown on the map. This gives some mild scrambling but the best bit is near the bottom where a buttress has to be breached. Here there is no path, just a section of rock that is easily negotiated using cracks. What a great end to the outing, and totally unexpected. Just another 1.5km of grassy walking to go now, straight back to the car. Back to the b&b and more chips. nice down climb on the east ridge This round gave some delightful bits of scrambling that really added to the enjoyment. With views as well it would be a hard trip to beat for variety. For walkers wanting to try some scrambling I think this would be a good start before moving on to Tryfan and the like.

Thanks for these two reports.
We were staying at Idwal Cottage only three weeks ago, and the weather was lousy. We had one crack at a walk and picked our way below the Glyder, dashing up Glyder Fawr just in time for the cloud to come back in again.
Nice to see that we'd chosen a superb area, even if we didn't see much of it!

Me and a friend are travelling to Snowdonia in July (16th) we are travelling from Hampshire and will be leaving very early to ensure we can have a crack at Crib Goch on the Friday.

The reason for the trip is a charity that we are supporting and the next day (Sat) we will attempt Tryfan. We both did Crib Goch last year in aid of said charity and really enjoyed it, hence the reason for our early dash on the 16th.

Neither of us have attempted Tryfan before and would really like to have a go at the Northen ridge. I would really appreciate some advice before attempting. Is this climb more difficult than the Crib? Is navigation going to be a problem?

What do you think of the Heathers Terrace route?

The Tryfan North Ridge route is easier than Crib Goch, in most places you can find as much scrambling as you like or go for the easier option. Also there isn't the same exposure. I think best to keep to the ridge crest as far as possible and be careful not to stray onto the faces. From the top you can get some more scrambling in the descent south to Bwlch Tryfan then choose your route out (or carry on to Bristly Ridge!).

The Heather Terrace route would take you to the Bwlch then you'd be climbing Tryfan from the South of course, but in my opinion for a first visit this wouldn't be as much fun as the climb from the North. I reckon if you enjoyed Crib Goch you'll be fine on Tryfan!

As for navigation, like any hill it could be tricky in thick mist so important to have these skills.

All the best
YH

North ridge it is then, evey time i ask for help on this site somebody is always willing to help. I will post photo's and write a small report on return.

Thank you for taking time to respond, i do not get to do this sort of thing often and i am really looking forward to this event.

Yeah, I'll second that Tryfan's north ridge is nothing compared to Crib Goch which I'm still working up the courage to try - didn't have any problems on Tryfan's north ridge though as more or less everything was avoidable. In fact, I even braved 2 chimney climbs on it (had to get advice off my friends when I got stuck partway up one but I did it in the end)...

Great report Yokehead - I did a very similar round the same way and really enjoyed it. I did that scrambly ridge up onto Pen Yr Helgi Du another time and found it was fairly exposed for me, although as I was going up it didn't cause me any problems - I just thought I wouldn't like to go down it! The buttressy-thing up onto Carnedd Llewllyn from the col is very easy in good visibility - I can imagine it's awkward if you can't see anything though...

Another time, if you look at your pic of Yr Elen (beautiful peak) and see the right-hand ridge on your photo, that makes a superb route up it from the cwm below. There's a valley up into the cwm with a path most of the way and you can descend down the steep face afterwards - a great walk (haven't got a map to see where it starts off from but it's from the valley round the corner from Idwal etc. - should be obvious from the map).

When I did your round with my mate, we had his sheepdog Ben with us. We ended up having to lift him down the buttressy-thing at the end of the descent from the Pen Yr Olau Wen ridge