g35.gpx Open full screen  NB: Walkhighlands is not responsible for the accuracy of gpx files in users posts
I parked at Idwal Cottage and set out at 8.30 before the crowds arrived, no car park charge today! The path to Bwlch Tryfan, past Llyn Bochlwyd, gave another relaxed start to the day. This is a grand walk into the hills with views of Tryfan and the Glyders, the cloudbase today was just above the tops but air and light quality was again poor for photos. Looking back I could see a coach at the car park and large groups of people heading up, on courses I think. On the way, Bristly Ridge ahead

I sheltered from the strong, cold wind behind the wall at the bwlch and spent a while over a second breakfast whilst looking at the way to Bristly Ridge. Instead of walking up next to the wall to the ridge buttress I decided to follow a trodden route below a rock outcrop that leads straight to a gully that I thought was the nicely-named Sinister Gully, obvious in the photo below about a third of the way in from the left (not my photo). Bristly gullies (not my photo, someone had a sunny day)

The gully starts with a climb on the left side to get over a wedged boulder. start of the gully

Then a short climb to a level spot where there is a bit of a terrace path across the base of the buttress and you can see what’s in store in the main part of the gully straight ahead. gully continues on the right

The climb was great stuff, using holds on both sides and at the back of the gully. The view back down looks impressive. looking back down the gully from near the top

The trickiest part I found was topping out, there is a vertical climb of about 3m in a narrow slot; mind you don’t snag your sack.

This photo is taken on the ridge looking back down the gully and shows it really well.
http://3.bp.blogspot.com/_568e_HbuFGA/S ... CN2414.JPG

After the walk I researched a bit on the interweb and found that others have labelled this route as Sinister Gully in their photos but it is not, Sinister is actually further left. The descriptions I found said that the gully I and many others have climbed is steeper and harder than Sinister, but shorter. I’ll try Sinister next time for a variation and to compare for myself. On the ridge now and views to the west open up once again. From here the way ahead up the ridge doesn’t look much at first, the delights really only show up as you near them. I kept to the crest for most of the way up and there are a number of options, next time I’m here I’ll spend longer on the ridge and explore. view up the ridge, no sense of scale though

There is a wide but thin pinnacle that you straddle as you climb over. A slab that slopes, with a drop below it, negotiated by using large cracks that head the way you want to go. 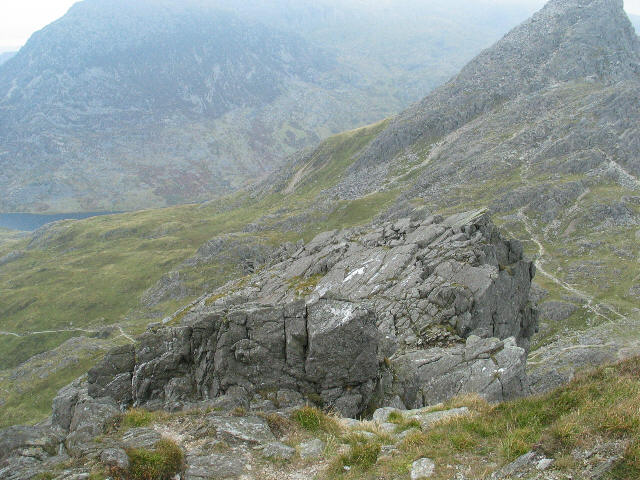 Steep sections and a facing-in climb down into the Gap if you keep to the crest. I stayed on the boulders as the ridge levelled out, all the way onto the summit plateau. It is a superb scramble but over all too soon.

I had the ridge to myself the whole way. 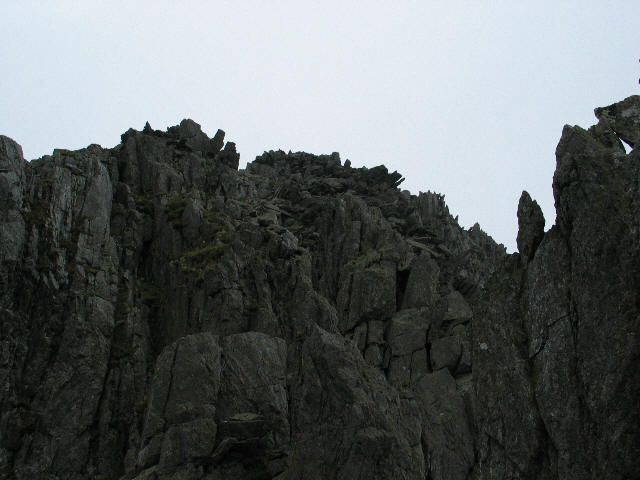 Unfortunately the cloud had dropped so the summit was murky. I spent some time clambering over the rocks around the Cantilever Stone, still no one around to give a sense of scale in the photo. Cantilever with summit rocks behind

The summit of Glyder Fach is another pile of large boulders. It is quite bizarre, as if a giant has held the boulders in his hand then dropped them to fall randomly in a heap. I wonder how they got like this, perhaps it was indeed a giant who was responsible?! I spent some time on the boulders; to climb to the top and the true summit requires a scramble, harder from the Cantilever Stone direction and easier on the other side. How many don’t do this climb to the true summit? The boulder at the top is shaped in an inverted V; I climbed up one side and slid down the other over the rock that has been polished by countless bums doing the same! And still no one around. Eventually I continued over the pinnacles of Castell y Gwynt to Glyder Fawr. No views on this part of the walk and the summit of Glyder Fawr is a poor place after Glyder Fach. I found a sheltered spot on the few summit rocks for a snack and coffee and waited a while for the cloud to clear, no luck but it was a good fester. I had a chat with the first people I’d met today. I started out north west along the path down the scree but after a short while left the path and kept to the east of it. A grassy rib at the bottom brought me to the Devil’s Kitchen path, I wanted to explore a bit here rather than going on the path round Llyn y Cwn and straight up to Y Garn. This is a great spot at the top of the cliffs, rocky outcrops surrounded by grass and some good wild camping sites. The view where the stream goes into the cleft was impressive, the photo doesn’t do it justice because of the lack of scale. I kept near the cliffs heading north west and a little further on stopped again, looking down to Llyn Idwal and the Idwal Slabs, hearing the climber’s calls. I went on alongside a ruined wall, ascending to join the path to Y Garn on the edge of the cliffs. After a last coffee stop at the summit I then went down the north east ridge, this path is fairly steep in places and becomes a well-made stone staircase toward the bottom. Part way down I stopped for a good while again, lying on some soft grass and matching map to hill features, taking it all in. The RAF turned up for some low flying entertainment, thanks guys! collection of Llyns from Y Garn

Once back on the flat I kept to the faint path to the west of the stream that drains Llyn Idwal, at the end of this you go through a delightful little gorge that gives a perfect end to the day. The toughest part ahead of me now, the 4 hour drive home!

Superb! A walk I've not yet posted (mainly because you couldn't see because of low cloud).
Nice to see how our walk might have been. (In a bitter-sweet kind of way... )

Great detailed pics Yokehead... I actually did Castell Y Gwynt - did you not think it was suitable for mountain cowards?

I really enjoyed reading your report Yokehead.
The gulley route up to the ridge looks interesting but I'm not too sure about the ridge section itself , looks a bit scary for me!Is it as difficult as it looks from below?
I love this part of the world. Great pics too. Well done!

Hi Andrew, post your report anyway, would be good to read about what you encountered.

MC, Castell Y Gwynt was obviously a piece of cake for you!

Johnovey, I think that the gully could potentially be more serious than the ridge itself, depending upon your experience. If you are comfortable getting up the gully then the ridge itself will be fine. There are plenty of holds and different options, just take your time and enjoy. If you haven't climbed Tryfan I recommend tackling that superb hill first, it will give great scrambling experience before moving on to Bristly.

yokehead wrote:MC, Castell Y Gwynt was obviously a piece of cake for you!

Actually, I used and abused another of my friends (Colin) - I sent him over each bit first and got him to scout out everything I'd seen as a possible part of the route first to see whether I'd be able to do it