Todays route was to take in three Munros (Ben Vane, Beinn Ime and Beinn Narnain) with, time allowing, a trip to the famous Ben Arthur to see what all this 'threading of needles' was about.

I knew this was going to be a long day so tried to set of earlyish. I'm not the quickest walker and I like to stop regularly to take a lot of photos (my excuse for catching my breath) I set off from Inveruglas Visitor Centre at 07:20. 15 minutes into my walk I realised something was missing - my walking pole. I debated going back for it because the last part of my walk off Beinn Narnain down to the path was a very steep grassy slope and I knew I would miss it. I decided not to as I would be able to manage!

I walked the same road I took yesterday to Ben Vorlich but went across the bridge to get to my starting point for Ben Vane. I had read a report which said you should take the first path you come across rather than the one marked on the OS map by the disused quarry. I met this path a few hundred metres from the bridge (NN29520, 09191) and as it looked like it went where I wanted to go I took it. It took me to the flat area just before the main ascent of Ben Vane and although it had been dry for a few days this area was still very boggy. The path wasn't easy to spot here so I carried on up the right, quite close to the crags, and soon found the path again. Nice views back down to the road from here. 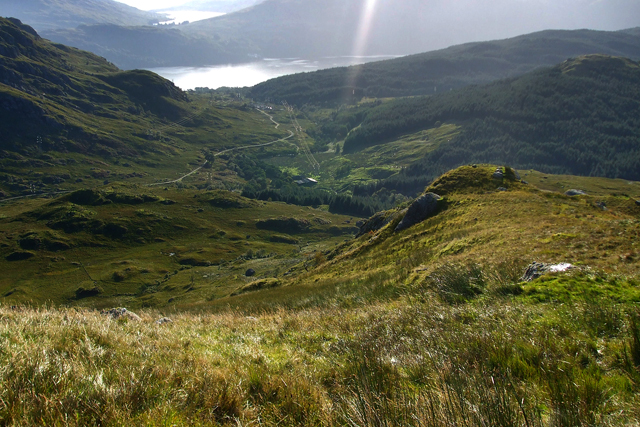 Followed the path which seemed to be heading straight for a wall of rock. Was getting worried as I didn't remember this in the reports I had read. Luckily once reaching the crag the path turned right and carried on through some smaller ones. Took a shot of Ben Vorlich and the Sloy dam from this side. 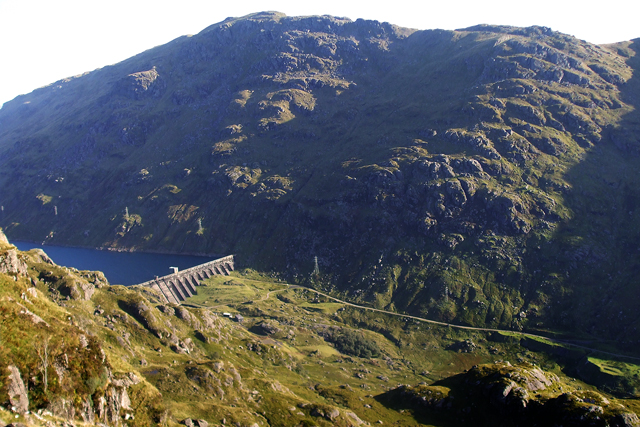 A little further on I had to have a break for a drink and was met by Colin (aka Monty) from WalkHighlands. Hi again Colin. We had a good chat about what we had planned for the day. He was doing Ben Vane and Ben Vorlich today. He had done Beinn Narnain before so showed me on his GPS phone the route off the hill. It looked better than my steep grassy slope so I remembered this for later.

Later on as I got higher there were nice views back to Ben Lomond ... ... and later on, forward to Beinn Ime. This picture shows the descent between Beinn Ime and Beinn Narnain. With Ben Arthur just visible too! As I got to near the top there were a few scrambly bits up some crags but nothing major or dangerous, and the views to the north of Ben Vorlich were great. 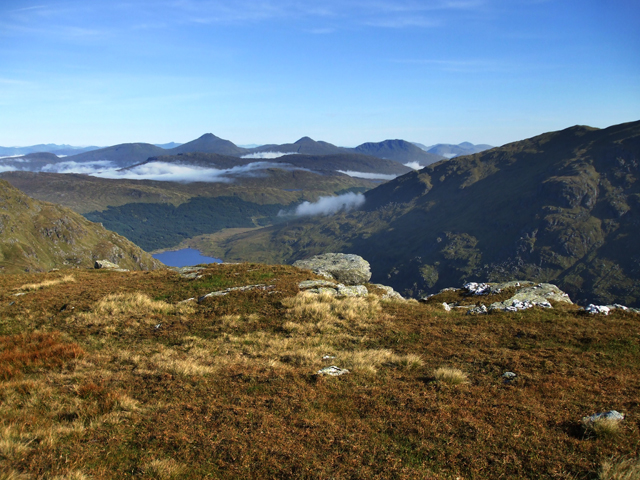 As were the views to Beinn ime and Ben Arthur. Finally reached the summit cairn just before 10:00, after passing Monty on his way down. There was a chilly wind at this point, although the sun was quite strong, so I didn't hang about too long. I had read about the big descent between Ben Van and Beinn Ime so, after taking a bearing, headed off for the bealach. I adjusted my route to avoid any steep crags and ended up going too far to my left. Probably lost a bit of time once this was corrected - good job it wasn't misty or I might have panicked. Took a break at the bealach. The route up Beinn Ime looked very steep but not too tricky in these conditions.

I soon found out how steep it actually was once I started. My legs were aching so I took a chance to snap Ben Vane again. Didn't take many more snaps on the way up because I was finding it hard work now. There was a chilly wind and several times cloud would roll in from the West to hide the top of Beinn Ime. The last section of the North slope was very steep and I was feeling it now. I started picking a rock in the near distance and setting off for it, stopping for a rest whether I needed it or not. The plan worked as I eventually reached the top at 12:15. I was expecting a false summit or two but once I cleared the slope the cairn was right there. 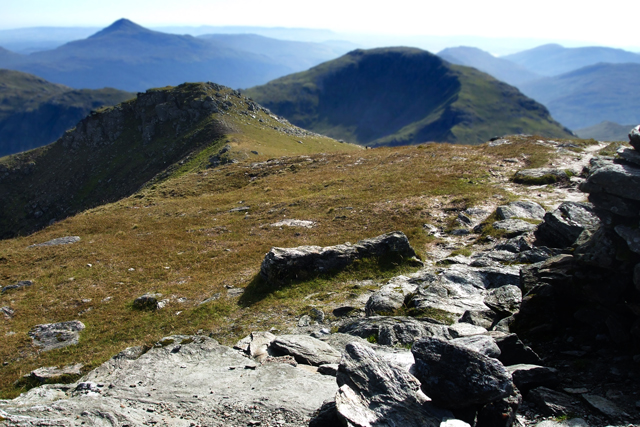 I had drawn up a rough timetable and was now a little behind schedule. I had left enough time to do Ben Arthur and Beinn Narnain so wasn't worried about the light, however, I was worried that my legs might not last the day. I was wondering at this point whether to skip Ben Arthur. I had some lunch and had a nice chat to some other guys on Beinn Ime before setting off from the summit. I had obviously rested too long as my legs were now stiff - took a good few minutes walking before they loosened up again.

The path down was easily spottable although it got a bit wet in places. Took a picture of Beinn Narnain on the way down. When I got down to the bealach I decided not to go up Ben Arthur today but instead to leave it for a day on it's own. Shame really as the conditions were perfect for checking out this 'needle'.

I took a picture of Beinn Ime once I had started my ascent of Beinn Narnain ... ... and a couple of Ben Arthur later on. 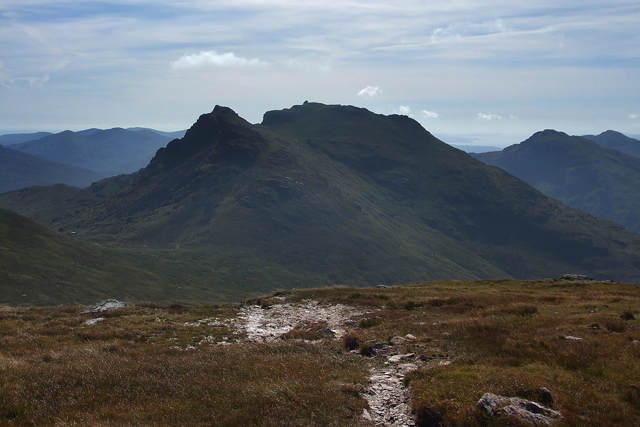 It was a good path up so I didn't find any real problems getting to the top. Reached this at 14:00. This was a busy summit with several large walking parties all clambering around the trig point. I managed a picture looking back to Beinn Ime once they had cleared a little bit. 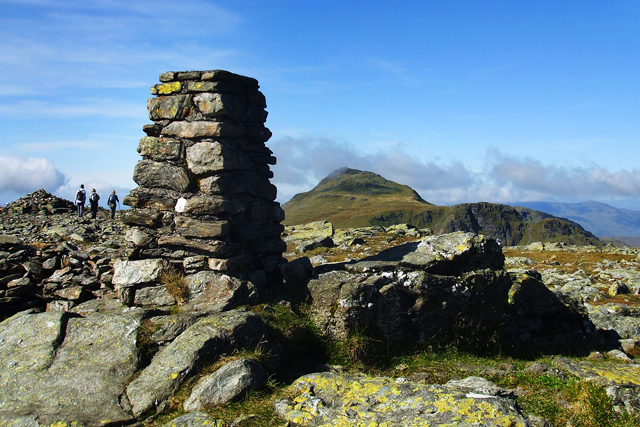 Great views across to Ben Lomond from here. 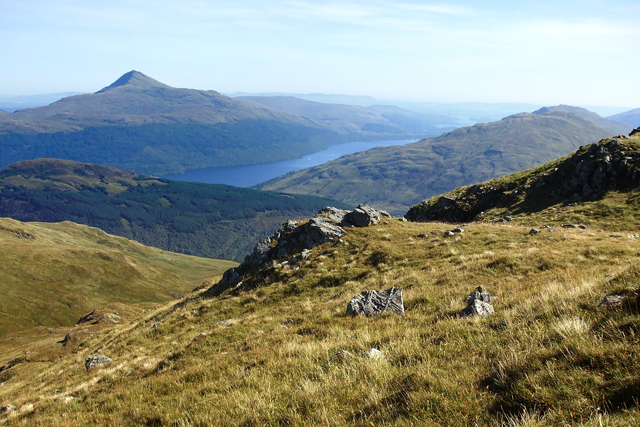 After resting for a bit and soaking up the views I just had to retrace the path back down, veering off to the right near the bottom to pick up a fence, and follow it all the way down (still quite steep) to the road. Long walk back to the car from here - "a horse, a horse, my last jammie dodger for a horse". Managed to take a picture of the slope I had intended coming down. Looked very steep but quite do-able, I think. My feet were now aching while walking back along the road to Inveruglas. Aching more going along the road than on the hills. Back to the car at 16:35 so it had been a good 9 hours and a bit walk.

I am a little annoyed at not doing Ben Arthur aswell but in a way I think I was right as I had still got two more Munros to fit in during the next two days.

All in all it was a great day which I really enjoyed. Celebrated with a couple of 99's at the Vistor Centre while basking in the sun, overlooking Ben Lomond. Lush!

Looked like a great day,lovely photographs.These are my next 4 to do.Possibly next weekend but i want
to hike in and do Vane and Ime on the 1st afternoon and camp overnight and do Ben Arthur and Narnain early the next
morning.

The views (when you get weather like this) make the pain of the hike up there so worth it.

Hi Steve,
Well done on another good day. I had looked at a route between ben Vane and Beinn Ime and knew that it was going to be a tough one so no wonder you were tired at the end of the day.

Looks like you enjoyed yourself with the great weather.

Maybe bump into you agin in the scottish hills

Of the whole weekend this was my favourite day.
Can't see me getting up to the hills more than once a year (twice at a push) but hope to see you again.

I'm planning on covering this area fairly soon, but need to bag my first Munro, which will be Ben Lomond.

When I do, I will be looking to your trek for inspiration as to what route I take. I'm also looking at Ben Vorlich, but I'm not sure if that'll be a Munro too far for a days trek.