It was with a bit of trepidation that we decided to get out and start our 2012 walking season even though we had had a pretty busy winter walking the hills around where we lived. However, we knew that with the Kintail meet just less than 4 weeks away that we needed to get our legs stretched and start to get some decent fitness for the year ahead. Su and Ruby at the carpark in Arrochar Su getting to grips with her new SLR camera

We had all along planned Bienn Ime as our first choice of the year as we had failed to climb it when we climbed Bienn Narnain in 2010 as we had run out of time and light. Also we had done the Cobbler in September last year as our last climb of the year along with a great crowd of walkers and climbers to see Andy Drinnon bid farewell to the walking and climbing he managed in his time over in Scotland. So off we went from the car park in Arrocher up the winding path through the forest and before long we were seeing Arrocher and Ben Lomond in all their glory. It brought back memories of the other two walks we had made to Beinn Narnain in November 2010 and The Cobbler November 2011. So third time up the path and heading for The Cobbler along the gradual rising path but this time we were heading beyond to the bealach That leads to Beinn Ime. At the Bealach a Mhaim

I could see that it looked very boggy and we started to climb up the broad shoulder and the best path seemed to be the well-trodden ‘stream’ that was coming down the hill. The only way is up!! As we made our way up the weather turned into glorious sunshine and although that was interrupted by the odd squally snow/hail shower it didn’t dampen our delight of seeing such great views as we made our way upwards. Ruby was leading the way and loving the conditions but better was to come further ahead as she played in the snow chasing her own made snowballs. Also thanks to the people coming up and down whom all commented on Ruby and it was easy to see who the star of this walk was!! Su with Beinn Narnain in the background Before long we were seeing Beinn Narnain and The Cobbler and Ben Vane and further away we could see Ben Lomond and Loch Ness. 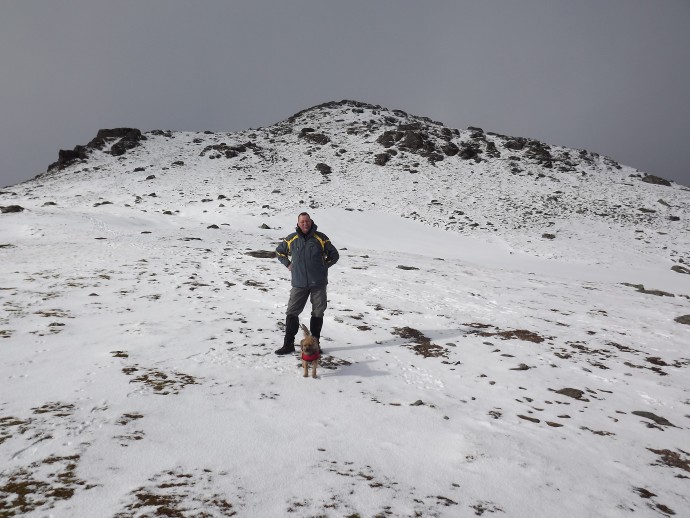 It wasn’t long before we reached the Cairn and celebrated Ruby’s first Munro at 8 months old (6 in human years!!). After a few more photos (Su’s camera was on overdrive!) we headed back down and managed to slip a couple of times down the wet slopes and were glad to reach the path back down from The Cobbler. Ruby had by now had had enough so I carried her a further part of the way to give her a bit of a rest before she got down herself and walked the remainder of the way to the car park. This was a great start to our climbing year but we need to get out and do more walking as Kintail will be creeping up quickly.

Hi Brian,Sue & not forgetting Ruby,so glad to see you back out,new where you were heading by your FB post & was wondering how you were getting on when I was heading up Carn "Mhaim,good to see the summit of Beiin Ime again,it looked a lot calmer than the time stretch & I were on this summit.

Hi Brian,Sue & not forgetting Ruby,so glad to see you back out,new where you were heading by your FB post & was wondering how you were getting on when I was heading up Carn "Mhaim,good to see the summit of Beiin Ime again,it looked a lot calmer than the time stretch & I were on this summit.

thats some walk for those wee legs!

Cheers Gammy and I'll have a look at Carn a' Mhaim.

If I don't see you before Kintail I'll remember to bring a wee dram to bring in the new year!! lol!!

aye Fraochydug - she might have wee legs but she gets about.

had to carry her a bit on the way back though she did get back down and walk the rest of the way. She's a wee gem!!

Well done Ruby..she's looks absolutely freezing...my westie loves being out on the hills although at 14 she's struggling now even with the lower level ones.
Did you find the geocache at the top? The last time I was up there, someone had left an Atomic Kitten CD in it!

(Probably better there than subjecting someone to their music!)

had to carry her a bit on the way back though she did get back down and walk the rest of the way. She's a wee gem!!

she looks it. they are still wolves at heart and full of energy.
my vet was amazed i used to walk the ferret 3-4 miles a day

Ruby is a border I take it. We also have a border called Hamish. See my latest walk report on the Cromdales if you want to see him. Ours is an awful wee chappie for scenting and takes off after deer, rabbits hares you name it. We can't really let him off lead if there is anything to chase on the hill. Still we love him dearly. Borders are just so cute and funny. He makes me laugh every day with his antics.

Yes she is a border and even the cat in the house suffers.

Because she's so young we had her on a lead as this was her first time out on the hills but had been warned that she might bolt if she got a scent of a fox!! Thanks for the advice and we might meet over the coming year. love her to bits though and she certainly enjoyed the day out.

she is just full of character and are so pleased to have got her.

Lovely TR Jockstar! Nice to see the "wee dug" out on the hill - sadly my Lucy is starting to feel her age now and I fear her hill days are largely behind her.

Looking forward to meeting you and Su in a few weeks up the road in Kintail!

Hi Jockstar,
Ruby sure is the star on the hills, its the same when we go out wi Bear she gets awe the attention

plus awe the leftover peices.

Great stuff Jockstar & lovely photos, a good effort from Ruby but don't take the poor lass out in snow over 6 inch deep

Some terrific pictures there, Jockstar, especially the last 2 - crystal clear, great colours. I'm wondering if they were from Su's SLR.
I'm keen to get back to Arrochar sometime - only been there once a couple of years ago on a sunny late October day when I was home alone. The day trip journey is a bit of a slog from here on the East coast - but the Cobbler sure makes the spine tingle, despite the hordes, such an iconic hill.

Yes, alaistair Stevenson. You guessed it. Her new SLR was on overdrive and Su takes some great pictures but I am happy with my Panasonic TZ7
We travel a lot too as originally from St.Andrews but now in Scotlandwell and have decided to turn to the cairngorms for the summer to try and keep the travel down. We also have a few to finish off in Perthshire so still plenty to do before tackling the ones further north,