Citylinking to Ben Vane / Via Arrochar

Citylinking to Ben Vane / Via Arrochar


We're getting quite used to the 926 Citylink Oban bus now. So many routes are accessible and the timings always seem to work out well.

We originally looked at the bus to Inveruglas/Sloy on Loch Lomondside but times were tight and it was also 50% dearer to travel to Sloy than to Arrochar. So we rechecked the maps/distances and decided it was worth the extra mile or so in from Arrochar. The first time I did Ben Vane was from Inveruglas, up to Sloy dam, straight up Ben Duibh then south to Vane and down by todays route. It was April 2 years ago and although snow and ice at the tops,, we did it in t-shirts,,one of my first diary entries on here. No such luck with the weather today im afraid.

The route starts off on the Glen Loin / Coiregrograin path, just past the Glen Loin Caravan park and before the bridge. We did the full circuit only a few weeks ago in constant rain, today was drier and we had been promised sunshine (HA!).

The bus drops you just after 9:30am at the shop in Arrochar,,about 5-10 mins walk from our starting point. (Note,,if you are heading for Narnain, Cobbler, Ime etc,,they will drop you round the road at Succoth but cant pick up there on the way back as there is nowhere to stop.) Off on to the Loin path about 9:45, this is an undulating path, nice views up and down the glen and you can see over to the return leg of the circuit walk. We were heading up to Coiregrograin where you meet up with the road coming in from the East/Inveruglas, only another couple of hundred yards and you fork off to the left. Now the reports for this seem to have you go off the road right at the bridge and indeed we saw some people head off up the burn then turn sharp left to ascend up to the shoulder rising just above us at roughly 200mtrs. 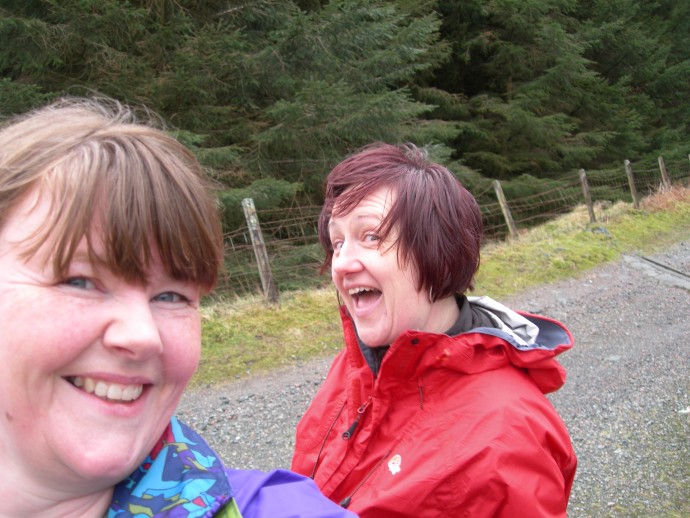 We ventured over the bridge for another 20-30 yards then jumped the ditch to follow a clear path to the left of the rocky outcrop, both ascents meeting up on the broad flat shoulder.

The path 'up' is then pretty easy to see, follow and stick to,,pretty much all the way (possiblity of a detour later !) 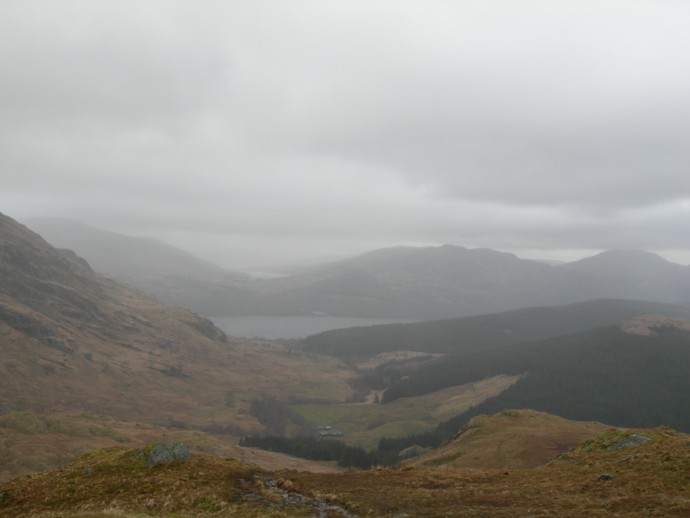 View from the shoulder to Loch Lomond

Ben Vane from this angle is a constant uphill slog, becoming rockier the more you gain height. The rocks are crumbly in places and with a bit of light rain at times today, could be slippy too. Only a couple of boggy bits to negotiate, (no negotiation on the way down,,just get over them Up to Vane and that aint the top! 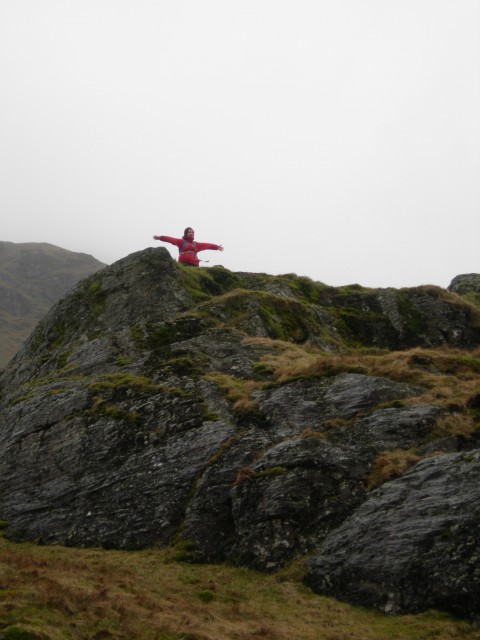 We met, overtook and were overtaken by several parties,,go the US 'old boy' in the Green Bay Packers hat,,he was having a ball. 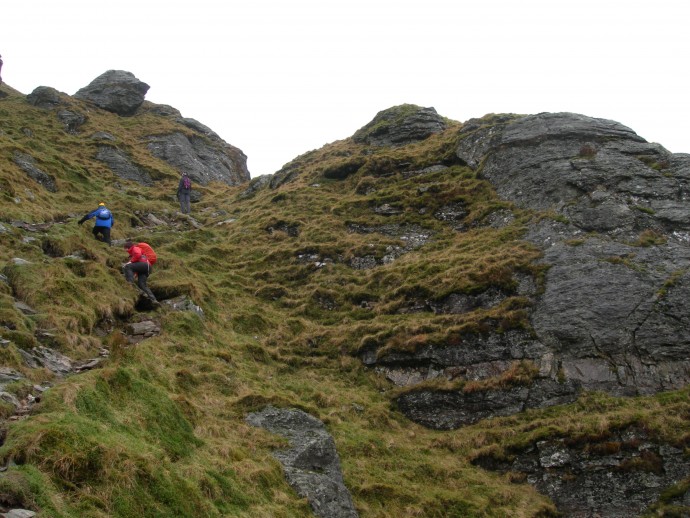 Scrambling comes in to its own, bums, knees, arms etc, all vital in getting up and over the craggy outcrops. I had read about a couple of false peaks, only really came across 1 but after a conversation with people on the way down earlier,,knew that until we had passed a large snow field,,we werent there. Advised a fellow climber just in front who thought that we were indeed at the top. At a small bealach the path forks, take the left fork. This brings you up to a narrow craggy path , dropping away sharply to the left and the swirling mist below us. Nothing too hard here though but watch your footing in bad weather. 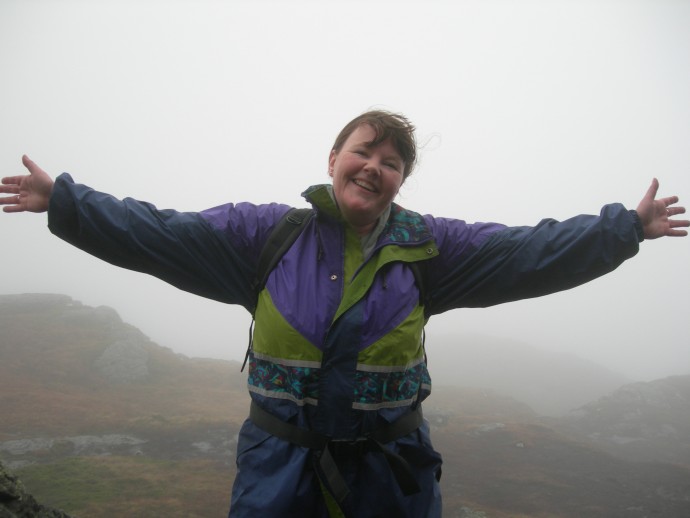 Talking of weather, we had seen some sunshine earlier,,,about 4 miles to the east, over Loch Lomond,,it was brief and never quite made it our way. Out of the sheltered areas, the gusts of wind were whipping up to a rate of knots, several times we had to keep both feet on the ground and wait until it dropped.

We passed 2 snow fields and also some of the water still had lumps of solid ice floating in them. We climbed one of the snow fields by way of previously made footprints,,ok for me,,but Margarets wee legs were not made for long strides of those gone before us ,,, We reached the top, along with some others we had met on the way up, wind was unbelievable, had to crouch down at the cairn or be blown off our feet. The true top is just over the flat peak, very small cairn, tapped it and bolted against the wind and back to the same route down.

Scrambled down over the rocks to a more sheltered spot and stopped for lunch. Had been constantly climbing for over 4hrs and were ready for some grub. My energy levels were pretty poor, long run yesterday morning,,bit of a calf injury and a poor nights sleep all telling on me.

15 mins or so then packed up and headed off. Down can be just as hard as up when theres this much scrambling but we managed without too many slips, met some people on their way up ,,only about 3hrs real daylight left,,hope they made it and to the wee white dog,,getting blacker and blacker from the paws up,,hope you didnt get blown away 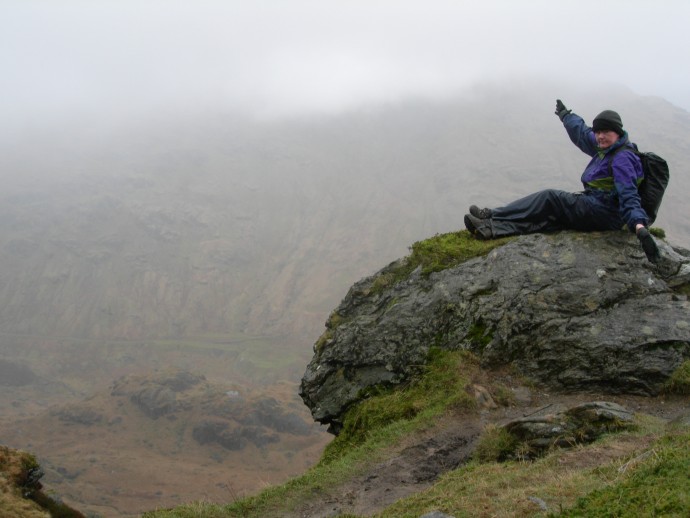 Amazing,,,(the sheer drop on the other side, that is!)

Back to the road around 15:50 and after a wee stretch and a couple of pics, 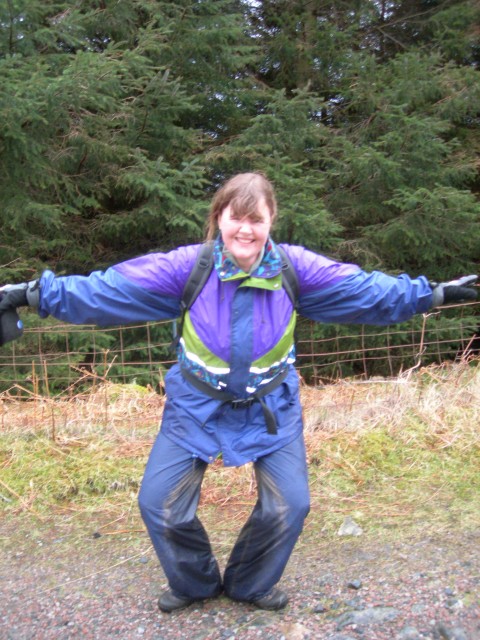 Stretching out with some ballet moves, second position plie I believe

started off down the road, just over an hours walk..we ended this faster than we started,, on a mission to get a coffee at Ben Arthurs Bothy before our return bus at 17:59. 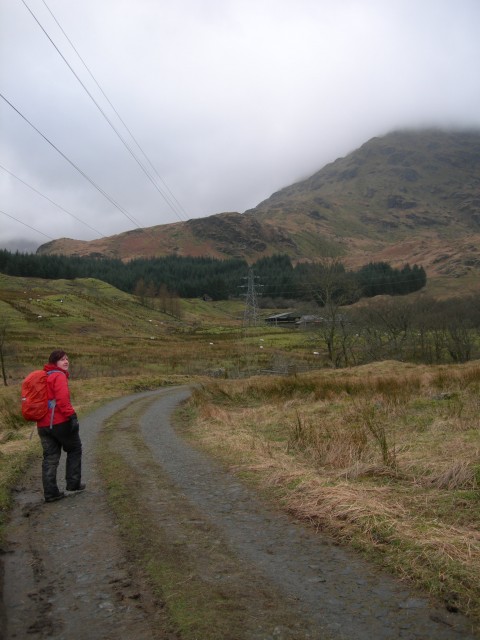 On the road again, homeward bound,,,how many other song titles are in there??? 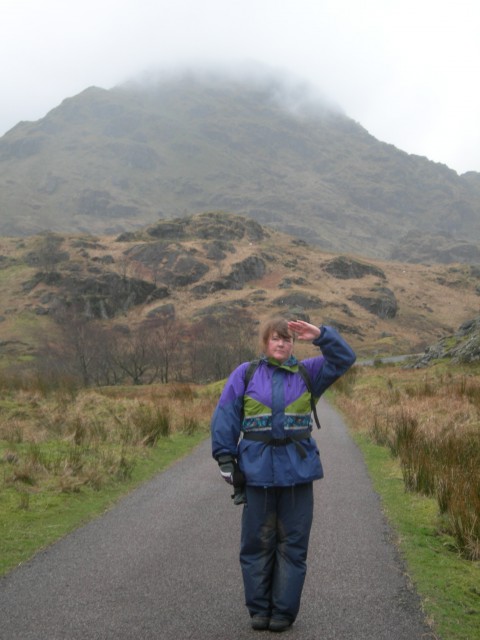 Salute to the Ben (wrong hand I know)

Made it, women on a mission indeed. Time for a loo break, strip off the mucky waterproofs and coffee in a polystyrene cup to go. Bus arrived bang on time and off we went,,back to the big smoke. Fantastic day, very long, a wee bit wet, extremely windy but a job well done. Loved it.

Pity about the weather but looks like you had a great day.

An interesting and different way to approach Ben Vane - I've cycled down your approach/return route when cycling the Succouth loop - think it would be an improvement on the usual tarmac road to this hill from Inveruglas, if a bit longer. Might be the smallest of the munros but it's a lot harder and trickier than many - well done to all - cheers

you look like you are having a fab time on the hills.

Oh, we always have a ball, love it,,cheers MrsS!

Hi GillC,
thats a different route to the usual one looked like you had a good laugh the two of use,
and it is a steep wee hill especially wi the false summits on it.

That was a funny report and a good day out you's had. Smart thinking as well getting the citylink if you pardon the pun

We did this hill on the day after you,its a steep one..a real lung buster, We had to turn back just before the summit as it was very wet and windy and we didnt fancy the scramble up to the summit..could have got up ok but didnt fancy the drop back down. Its a great wee hill though and we will be back to bag it.