I had intended to leave this walk until a summer month as I really didn’t fancy tackling the East face of An Stuc. Some reports suggested the scramble was fairly straight forward whilst others indicated it was a real challenge. However I had climbed Meall a Choire Leith and Meall Corranaich last weekend and the views across to Ben Lawers were spectacular. If I climbed Meall Garbh and An Stuc it would also mean I had completed the Lawers range munro’s.

Anyway Ruby and I set off from the Lawers hotel car park at 0845 a little late due to an unscheduled search for an open petrol station between Callandar and Crianlarich! 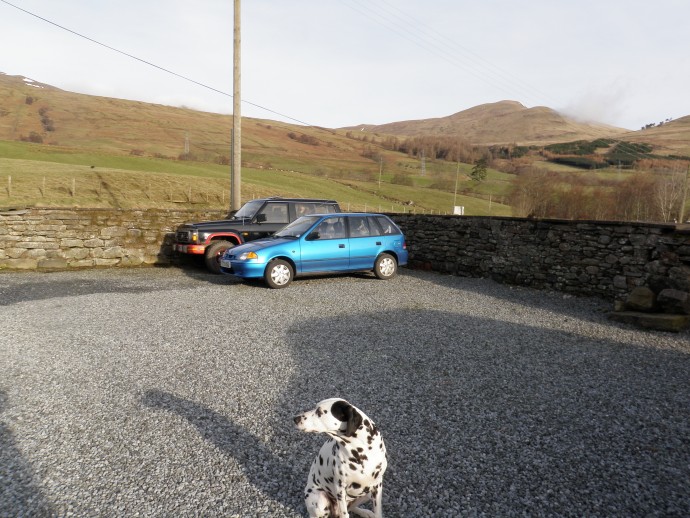 Having climbed Meall Greigh last summer as part of my first wild camp I didn’t fancy the slog up this one again so opted instead to follow the burn further up heading toward the beallach at Larig Innein. I was wearing my new Meindl Burma Pro boots for the first time and I am glad to say they were fantastic all day long. Ruby didn’t fancy tackling the little bridge so opted for the wet route. (I was so tired on the way back that I did the same!!!)

our_route.gpx Open full screen  NB: Walkhighlands is not responsible for the accuracy of gpx files in users posts
Pic 2 - bridge 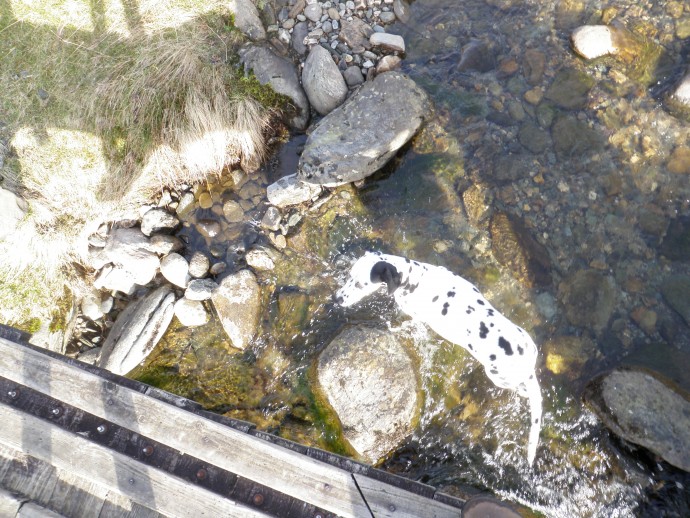 The feeling of isolation began to grow as I walked alone without sight of anyone else. This was magnified when I came across this sheep skeleton. 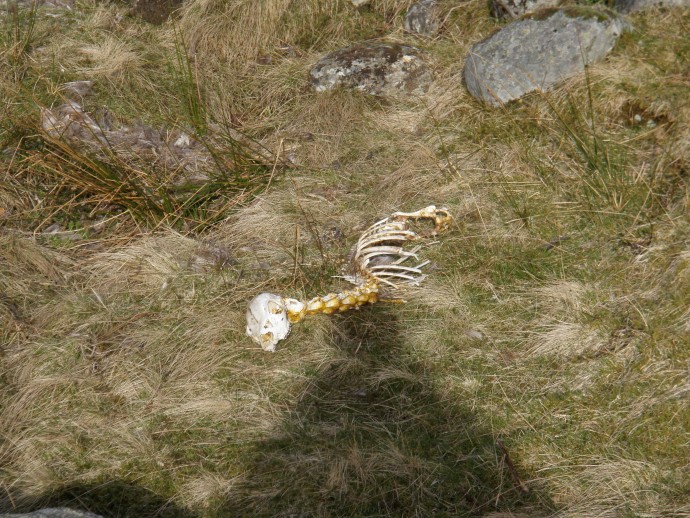 As I approached the Bealach I spotted a couple of walkers ahead – the first sign of anyone since setting out. 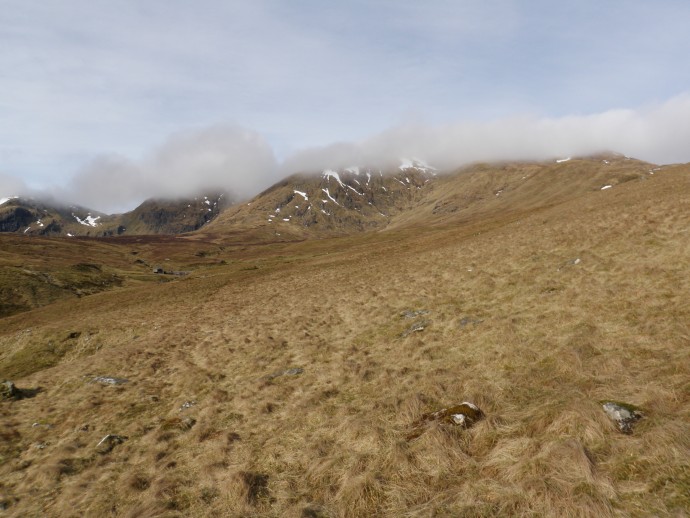 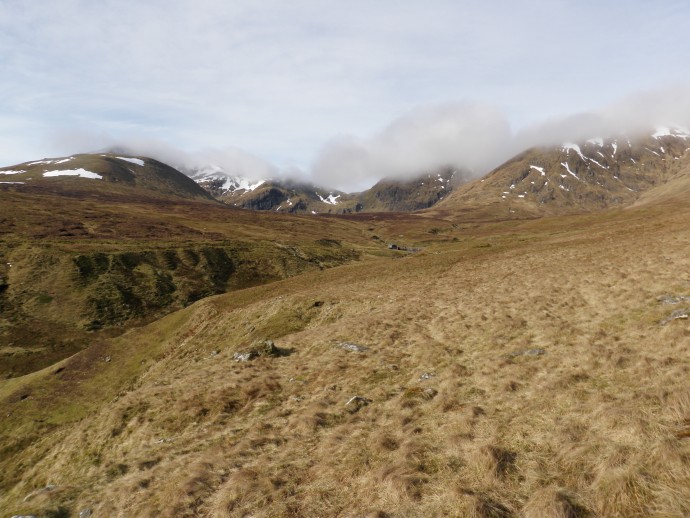 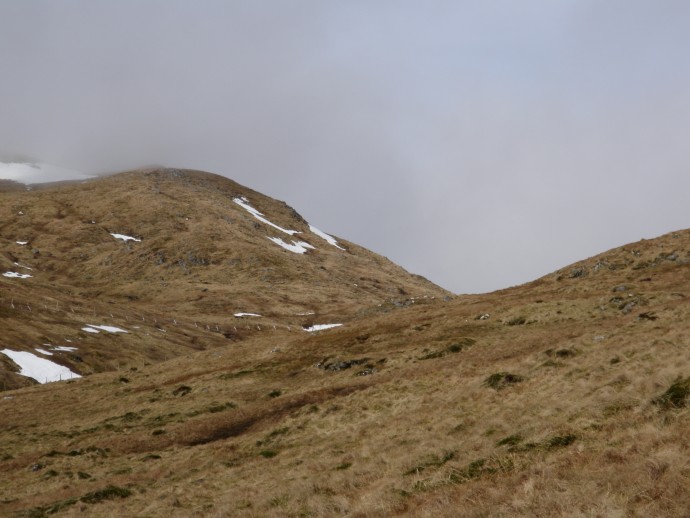 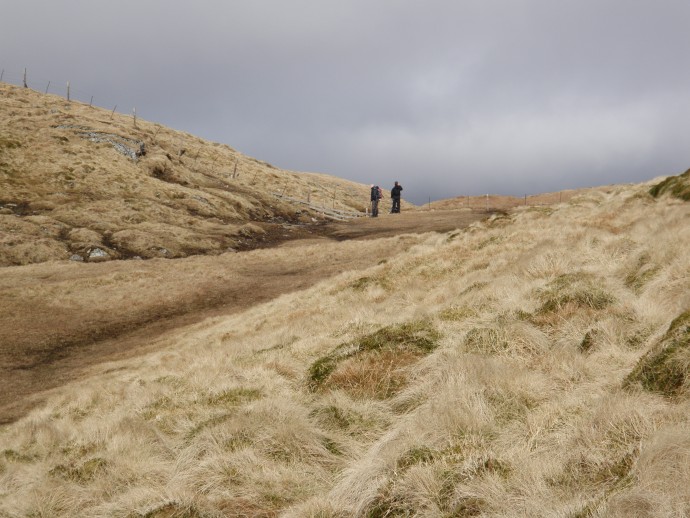 We exchanged waves and that was the last I saw of them all day.

The weather had been fine up until this point with very little wind, although the clouded summits suggested worse was to come. And how true that was!! As I headed up the steeper ascent to Meall Garbh and into the cloud the wind really picked up and the chill was significant. I decided I should stop and put on an extra layer and don my hat and gloves. While in the middle of this process (note to self – do this before getting cold and remember to put your jacket on with the wind at your back – much easier and less chance of your jacket flying off the side of the mountain followed by the onset of hypothermia!!) a man and young boy (10/12 yrs maybe?) came bounding down the path full of energy. They had just topped Garbh and thus completed the Lawers range – congrats to both! 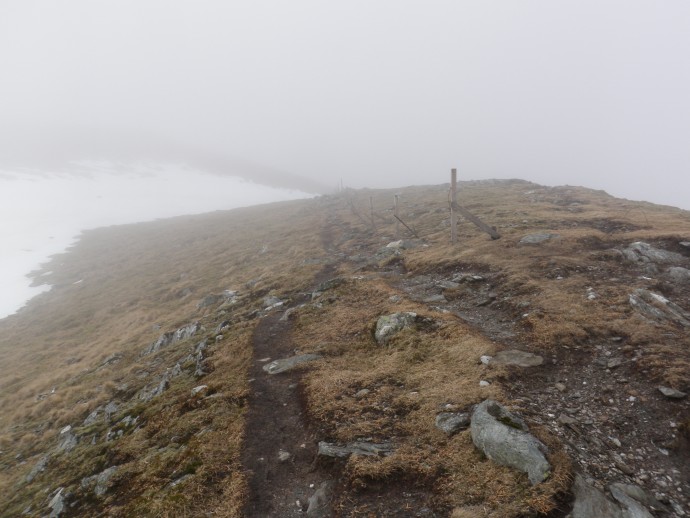 We finally made it to the summit of Meall Garbh after 3 hours. I must admit I was feeling it in my legs and really didn’t like the conditions at all – no visibility and very strong winds. At this point the summit of An stuc was looking like a trip for another day. 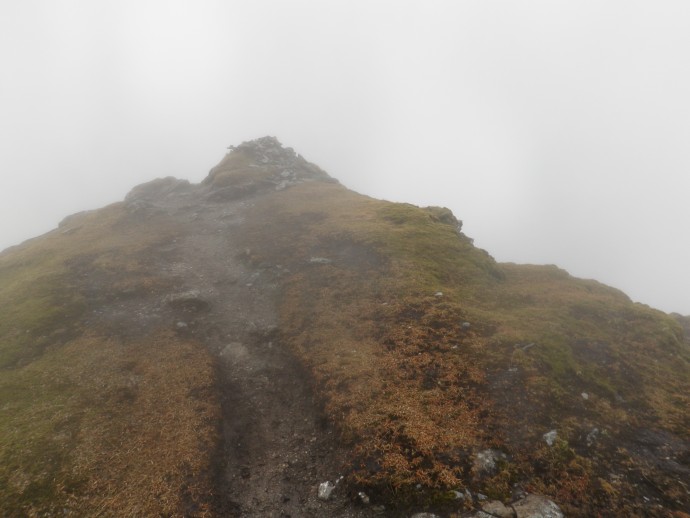 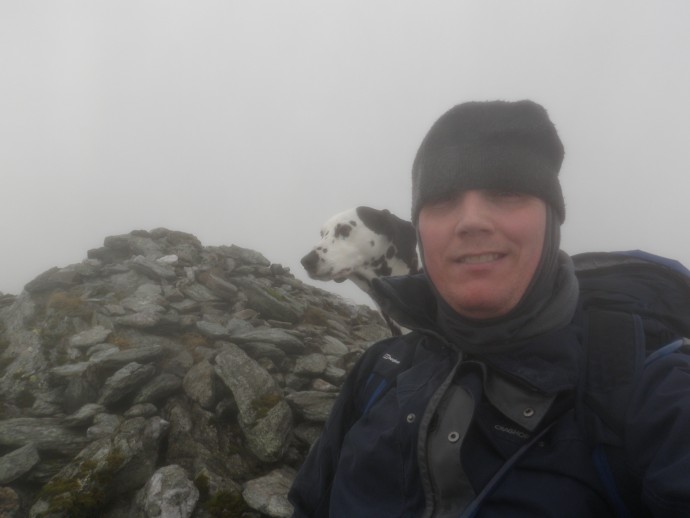 However I thought that as I was so close I might as well go and have a look at the east face climb. We got to the Beallach between Garbh and An Stuc had a drink and bite to eat while trying to establish a route to tackle – it looked very sinister. On the pull up to Garbh we had also passed a group of 4 walkers with 2 dogs. They had just come down the east face and said that although it had been difficult with a lot of loose rock/scree and that it was probably easier going up! 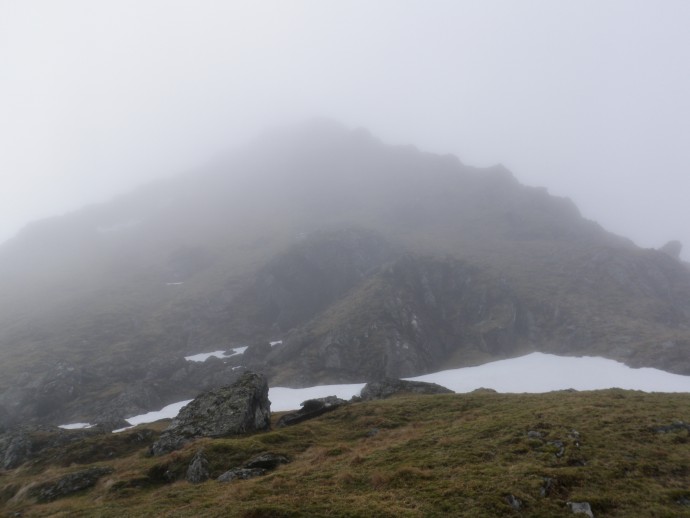 So decision made – I was going for it (in any case I didn’t fancy the slog back up Meall Garbh to get home). I put my microspikes on which significantly boosted my confidence and off we went.

There is a well worn path at the start which takes you up around 50% of the climb. My tactics were simple – take it slowly and be sure of each step and don’t look down!!! I think the heavy mist actually made it less intimidating. Ruby had no problems and followed up behind. I stopped every few minutes to catch my breath and snap a couple of pics. 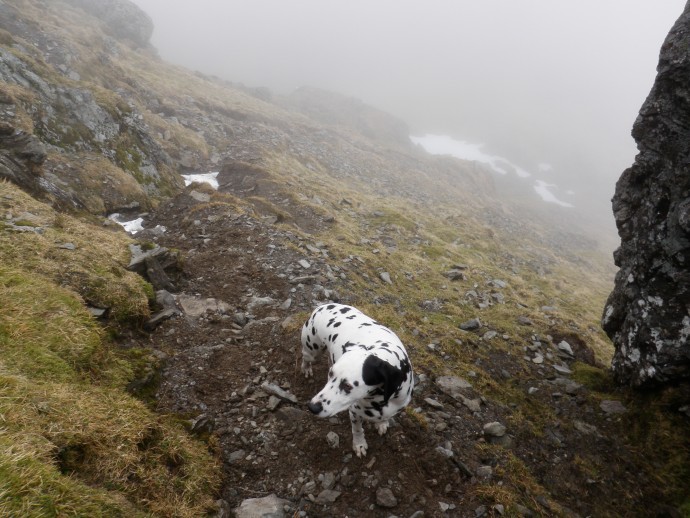 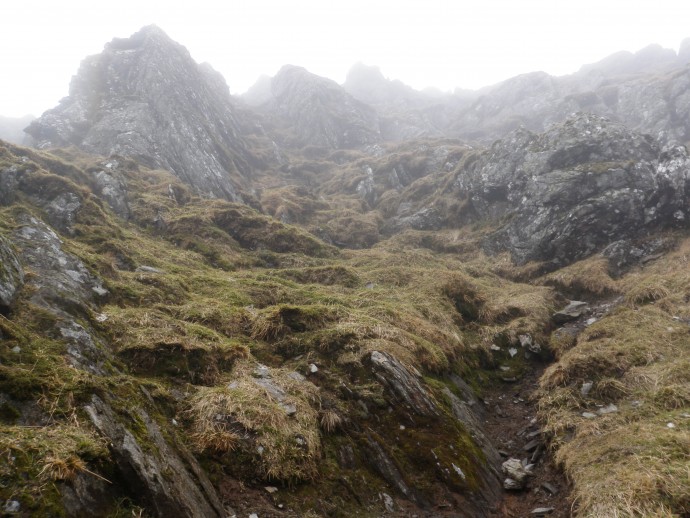 As we climbed higher the incline got steeper and the loose scree became worse. There were a lot of places where large rocks previously held firmly together with dirt/grass/ice were precariously loose! On several occasions I had to change my next step as it became clear the footing wasn’t solid enough. I am a big guy at over 16 stone so when my weight goes down it has to hold – or else! 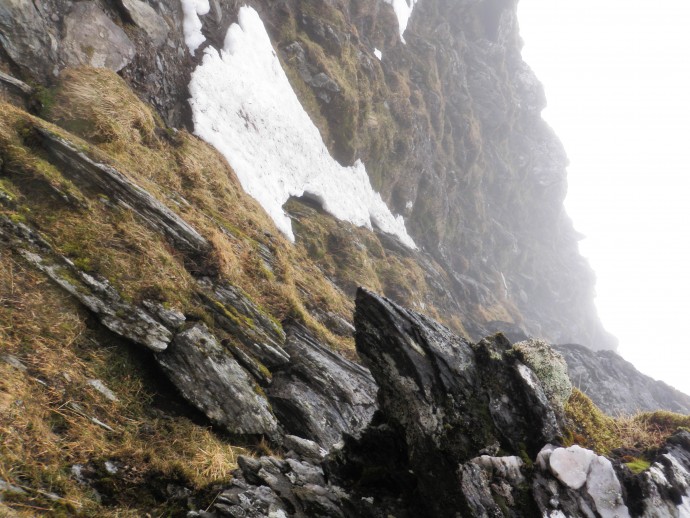 Just as I thought the climb was going well I looked up and realised I was stuck! I had taken a left fork a little earlier and realised the climb ahead was just way too steep and loose. Going back down wasn’t a preferred option and just as I could feel the panic begin to surge I looked up over to my left to see Ruby heading round a blind corner. Looking down to my left there were a couple of well worn footsteps, and so with a bit of effort I heaved myself up not knowing what was round the corner but trusting that Ruby had found an accessible route. If this had been a mistake I would probably still be there right now as I really don’t believe I could have made it back down!!

And there she was just sitting waiting for me with only 20-30 meters of easy scramble to reach the summit ridge! 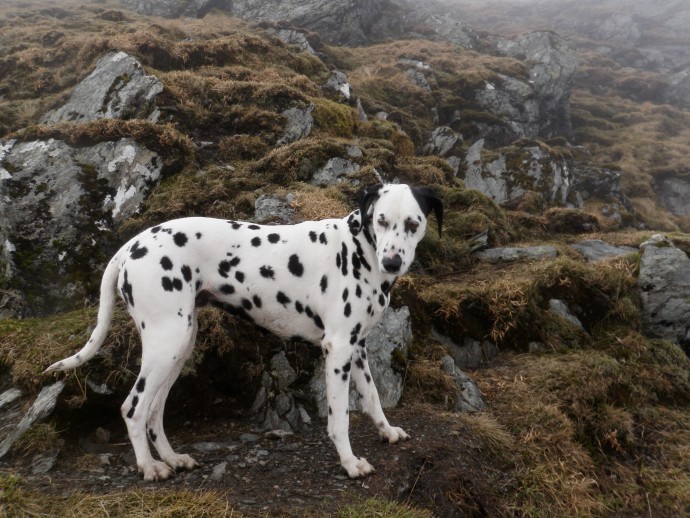 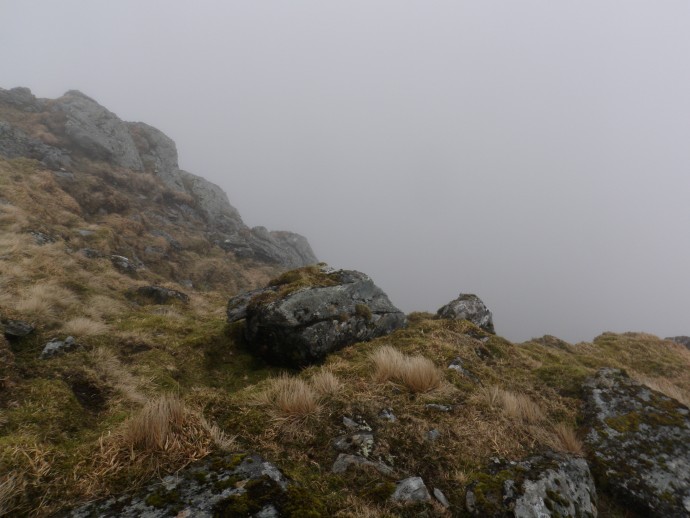 Pic 17 – 197. Just at the point where I have finished the scramble and I know I am safe - looking a bit rattled me thinks! 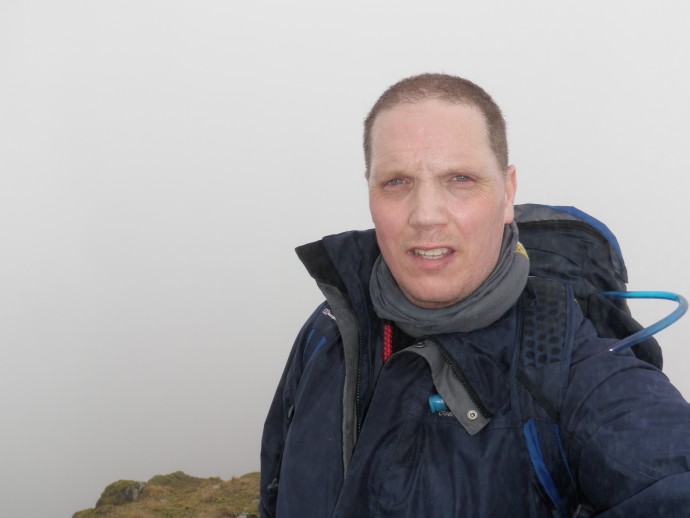 I have no doubt that for many experienced walkers this scramble is a piece of cake, however I also know that but for good luck (and a faithful spotty dog) it could have been a very dangerous place for me. I would definitely suggest against a solo ascent unless you are an experienced walker with good scrambling skills. I would also rate this scramble as more difficult than Stuc a Chroin, but again maybe I got luckier with my route that day…

We reached the summit of An Stuc after about 4. 5 hours walking 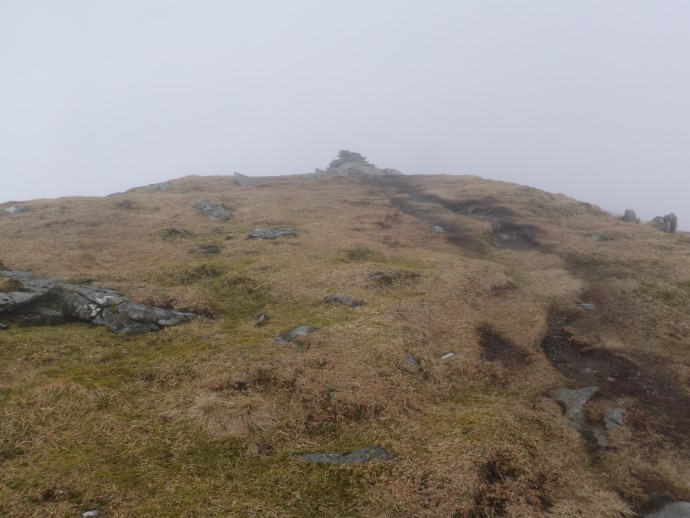 another one for the scrap book. 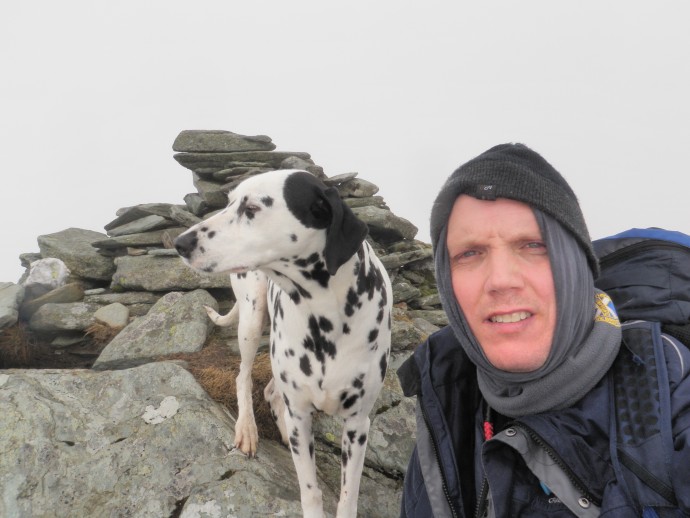 Soon we got our first views of Lochan nan Cat 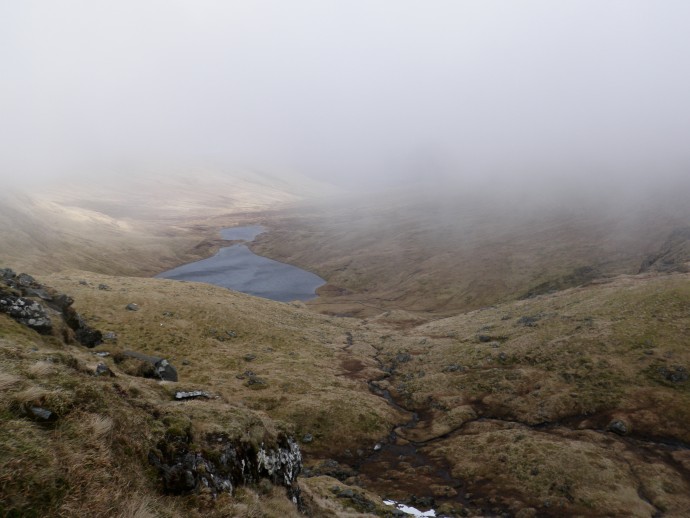 However before reaching the safety of the Corrie floor I realised I was going to have to tackle another fear – a controlled bum slide on snow. The last one I attempted nearly ended in complete disaster over a gully up on An Caistel but for the rugby tackles of Andy and Rick. I escaped that one with only a few cuts and bruises. This time I was on my own. The route down is described as on steep grass which was correct. I picked my way down avoiding the snow patches until I got the last section. I suppose I could have climbed back up and found another route but I was knackered by this point. So I sat down for a few minutes to gather my breath and sort my approach in my head. I tried my spikes on the snow but it was too soft to take a firm bite. 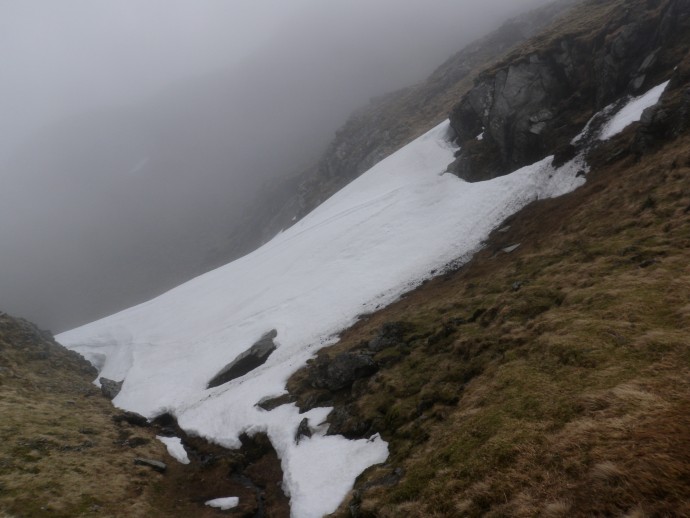 No other option, I eased my bum onto the snow spikes in and off I went – yeeeehaaa!!! 10 seconds later, safe and sound with only the long walk out ahead. 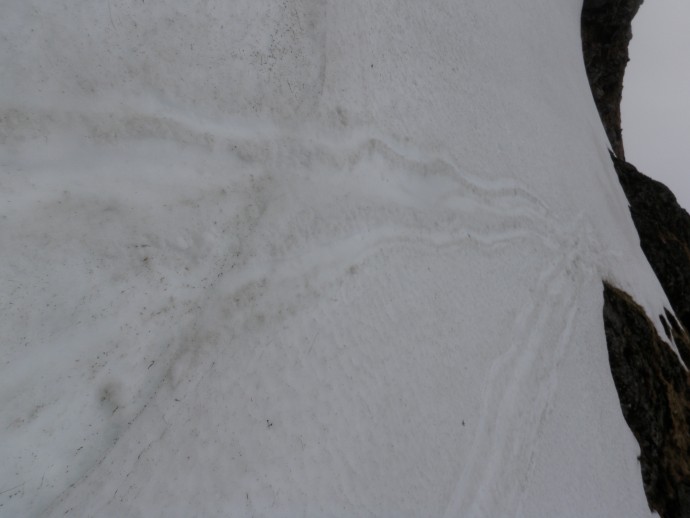 I guess my only disappointment from today was the lack of views from up top, however for many reasons this is one of my personal favourites so far.

The walk back along the lochan shore was very picturesque and took my mind off how tired I was. 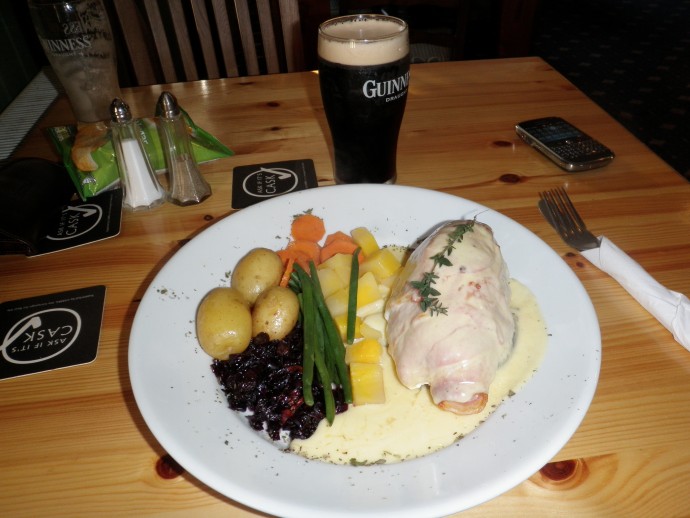 A great way to finish the day

Oh that looks like you had a fine day.. Shame about the views, but I was brought up to believe that you have to be out every week to be in the right place at the right time once in a while.

Nice report as for An Stuc there is the rocky scrambly route up or round to the left is the grassy route up which has footsteps embeded into the ground. That Lawers meal is making me hungry

some more pics which I couldnt load on the report Looking over tho Meall Greigh from Lochan nan Cat one for Rubys scrap book Looking up to Lawers, an stuc and Meall Garbh from the slopes of Meall Greigh

Well done, I was lucky and done this in the summer in perfect conditions. I am like you and found this a bit of a scramble. I still have Stuc a Chroin to do after turning round after Ben Vorlich as the Prow looked scary covered in snow. Im thinking of doing it very soon as my friend has passed me an alternative route up.

Well done great report. I agree with you that the other stuc is an easier scramble

Johnny C - the meal I had at the hotel afterwards ( chicken breast wrapped in bacon and stuffed with haggis and black pudding, served with seasonable veg and a whiskey cream sauce and one very cold and very delicious pint of Guinness) was simply superb!!! If only mrs 2d could cook that well - she would definitely get 10/10 instead of the average 9.5

Good effort there 2d,always new dogs had more sense of direction than us.

An Stuc is a fine hill. Great food at the Lawers Hotel is exactly what's needed after a tough day. We personally will be returning.

Nice report and cheers for the tip on the boots, I have been thinking about them

ps...Ritchie enjoyed An Stuc too

Great report,we did this one on Sunday,the views were fab...the wee scramble up Stuc fairly gets the blood pumping,wouldnt fancy going down the way!!

.I still think the descent down to the Lochan from the bealach is very steep and scary!!..lol..cant believe I managed that when looking back.