A good forecast seen us heading for the Cairngorms on Sunday,for me and Ian,some unfinished business and for Jim a first visit to this ace neck o' the woods. carn a' mhaim in the centre

Derry Cairngorm had eluded myself and Ian twice so this time it was gettin' done.Set off from linn of dee car park at about 7 15 heading for derry lodge,got here in about an hour then continued over the wee boggy bit and then up the heathery hillside to carn crom. think this is beinn a 'ghlo

Once up here the views opened up to the big peaks of the cairngorms,cairn toul ,angel's peak ,braeriach all looking impressive and ben macdui looked massive,it was pretty windy up here though ,forecast looked to be spot on so far. me jim and jake 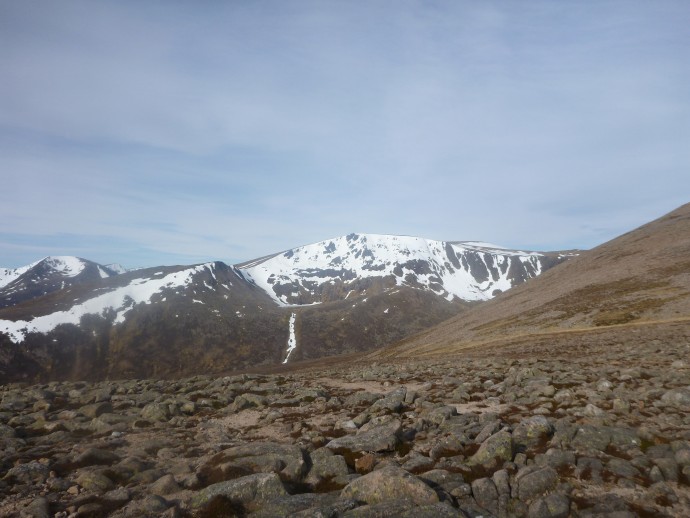 Made our way from here up to Derry on a good path,surprised by how little snow we came across on this route,had crampons in bag and big clumpy winter boots on(would pay for this later)and made the top of a very windy derry cairngorm after about 3 and a half hours. jim and ian on a windy derry cairngorm next target in the distance

Quick photie here then then staggered and stumbled over the big rocks down toward loch etchachan,we were all feeling good and were going to get beinn mheadhion conquered today as well. A quick bite to eat down near the loch with great views down to glen derry and then we were of up the steepish bit to mheadhions flat summit plain. tea break and a look down glen derry Not far from the summit tor we bumped into walkhighlands regular peteR,(a very nice bloke indeed

)and after a wee blether he was off towards Ben Macdui,a long way but i'm sure we'll read about it soon.Pete had told us the scramble up the biggest tor was nothing to worry about so me and jim went for it(not daring to stand up at the top as it was now as windy as god knows whit)Ian took the photies then he and Jake bounded up as well,Jake making it look very easy in about four mad dug style moves me and jim triumphant ian makes it as jake bounds up

(cheers boss)and then started heading back down. loch avon away down there

Was really looking forward to getting the catering on at the hutchison memorial but disaster struck-stove would not light-diagnosis-igniter kapoot! .Never mind,all that was left now was the 8 miles or so down Glen Derry

,a braw walk indeed but by now the 4 season boots felt like they weighed a ton and to make things worse Jim had developed blisters on his feet Eventually got back to derry lodge and took the boots of for 5 before the last 3 miles back to the car park,people whizzing past us on bikes making us very jealous

.Back to car park after 9 hours 15 mins,a long day but really pleased with the way the weather worked out,clear skies all day,a bit windy at times but all in all one of the best days yet on them hills. a well deserved beer or three in braemar

I was just along the road from you guys doing Carn a' Mhaim, great day for it. You guys wern't the only ones experiencing problems with 4 season boots, i was the same. I don't think they like hard tracks

I see you mention the bikes as well, again i was the same.

Johnny Corbett wrote:I was just along the road from you guys doing Carn a' Mhaim, great day for it. You guys wern't the only ones experiencing problems with 4 season boots, i was the same. I don't think they like hard tracks

I see you mention the bikes as well, again i was the same.

Just read your report Johnny,is that kibo's you've got?Mines are,they are excellent boots but yesterday was not the day for them.Didn't have any blisters myself just really tired uncomfortable feet.Big Jim though ,he had the dreaded blister

Apart from that a great day out

Good report again Dave, looks like a cracking day, good clear photos, that last summit look great, Jake did well to get up it

Looks like you guys had a great day. Weather was miserable were we where

Looks like you guys had a great day. Weather was miserable were we where

Not in the least jealous

And great pictures too

It was certainly windy on that hill

Great summit shots of the Tor

I'll get my report done soon, but managed to bag macdui too

The legs know about it today though. That's a long way back from Derry Lodge isn't it!

Great report Pigeon of a wonderful area, love the pics of those huge rolling hills with a dusting of snow on for effect, lovely

Some cracking photos. Looks a bit like the Arizona desert in some shots with the big rocks! lol: can't wait to make it up to that playground some time soon!!

Must be the spring season for changing socks, only did 14k in the Ochil hills and ended up with chaffed feet. Good report, must say I missed going out with the team and it was quite windy on the golf course too.