Above the clouds on Grisedale Pike

Above the clouds on Grisedale Pike


Sometimes the most difficult thing about going for a walk in the Lakes is deciding which fell(s) to walk. A somewhat complex fell forecast suggesting an East West split should have made it easy, pick a walk in the East of the district, enjoy the sunshine and stay away from the clag. But the forecast had mentioned the magic words, "temperature inversion" with the higher fell tops being above the clouds. I had originally planned to stay at modest heights given we had only one fell walk in around 3 months but the promise of the spectacular drew us Westwards and towards the shapely peak of Grisedale Pike.
The drive over the A66 included plunging into drizzly fog over the Pennines but by the time we descended towards the Vale of Eden the Far Eastern Fells were gleaming in brilliant morning sunlight. We resisted their all to obvious charms and pushed onwards. The first sight of Coledale confirmed we'd made the right decision. The huge bowl was filled with constantly moving clouds and looked quite magnificent.


TR_120311-102458.gpx Open full screen  NB: Walkhighlands is not responsible for the accuracy of gpx files in users posts

Following a little bit of bother parking we set off up the initially steep lower slopes excited about what lay ahead. The path soon levelled off and for a short while we were alone as we made steady progress over the Birkett top of Kinn. Walking along the grassy carpet, Coledale beck glinting in the sun several hundred feet below and a light breeze wafting about on what had already become a wonderful springlike morning I was left to wonder if life ever got any better than this? Lovely walking lower on the ridge Looking down to force crag mine.

My reverie was soon broken however by the thud of trainers as a gaggle of fell runners sprinted past, no doubt on their way to completing the whole Coledale round in half the time it would take to us to get up Grisdale Pike. I'll take my time and the views in thank you very much.

The View of Coledale from higher up was breathtaking with Causey Pike in particular attracting a constantly changing coat of swirling cloud. Ahead to Grisedale Pike Looking back towards Skiddaw Hughie having a bit sniff

Suddenly cloud breezed into Grisedale filling it like a steaming cauldron, below us an excited cry of "Broken Spectre!" went up. I was gripped with contrasting emotions as I was filled with the urge to go running down the steep rocky path in a desperate attempt to catch a glimpse of the hill walkers holy grail. Images of the inevitable trip, smashing my camera or face to many pieces won the day. So close yet so far. ...and looking up the ridge

And so to the now cairnless summit of Grisdale pike. Pictures from only a few years back show a decent sized cairn but something (or somebody) has obviously taken offence at the structure and scattered it around the top leaving only the splintered slate ridge in its place. The views from the summit were awesome. The clouds were in constant motion revealing and hiding neighbouring fells under the bright blue skies above. Skiddaw and Blencathra to the East, Sail, Crag Hill and Grasmoor close by to the South and The Scafells making fleeting appearances further afield. Scafell and Great end beyond the Sail Pass 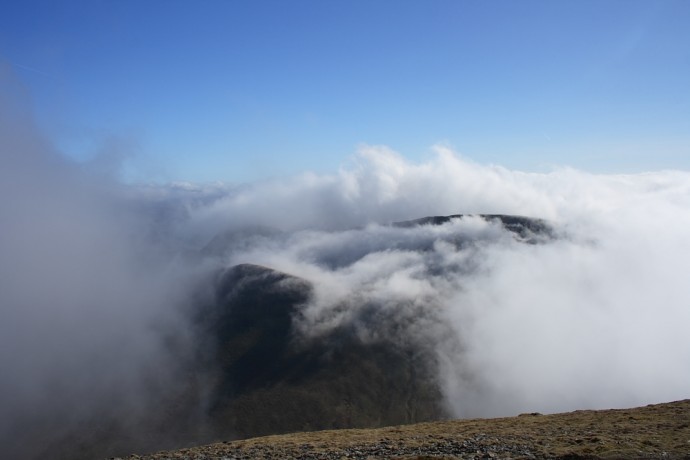 Grace on the Summit Interestingly Helvellyn and the Eastern Fells were below a blanket of cloud, sometimes when deciding where to walk you make the right choice. Wow, you certainly got some brilliant photos, John

Seems like you had the better weather on Saturday. In fact I can see cloud I was engulfed by on my walk!!!

WOW, absolutely stunning. What a wonderful day in the hills captured beautifully in your excellent photos

Thanks folks for the kind words.

p.s. Just noticed I got the date wrong. We did the walk on Sunday. I'm reliably informed that Saturday was a canny day also however.

colgregg wrote:Seems like you had the better weather on Saturday. In fact I can see cloud I was engulfed by on my walk!!!

Good stuff! Looks like the Lakes had weather similar to that we got on Moel Siabod on Sunday. Can't beat it! Thanks for sharing.

Saturday was a bit overcast but sunday was magical. I was cycling over Kirkstone and Shap on Saturday and it was pretty gloomy. Sunday was a real spring day. Fantastic photos.

icemandan wrote:Saturday was a bit overcast but sunday was magical. I was cycling over Kirkstone and Shap on Saturday and it was pretty gloomy. Sunday was a real spring day. Fantastic photos.

I overheard somebody on the way up saying they had a good day. Thats the lakes for you however, don't think the fells north of whinlatter pass saw the sun all day.