Farewell to winter on Schiehallion

Farewell to winter on Schiehallion


I have fallen a bit behind with posting my reports, now it's time to catch up. Over the last couple of weeks we witnessed the first signs of spring and the nature suddenly blossomed to life. Temperature jumped up quickly and high pressure front arrived (at least for a time being). Last Monday I found myself sitting on the summit of Broad Cairn above Loch Muick, bathing in sunshine and feeling like it was May or June. Hard to believe that only a week earlier we were scrambling up Beinn Eighe in winter conditions...
Before enjoying a set of proper spring walks, we had an opportunity to say farewell to the passing season. The day after our Beinn Eighe adventure looked reasonable, especially towards the south, so I suggested driving down to climb Schiehallion. I didn't want to push too far with another difficult route as my old injury was still bothering me a bit. Kevin has already done this Munro once, but in thick fog and he saw zilch so he was happy to repeat the mountain. Funny, when he began climbing Munros with me, he had about 90 ticked off and I was starting from scratch of course, now he's done 122 compare to my 66. I'm catching up

I keep joking that once he's completed the first round, he'll be immediately half way through his second

Back to Schiehallion - it caught my eye a few weeks earlier when we climbed Ben Vrackie. Such a shapely mountain: 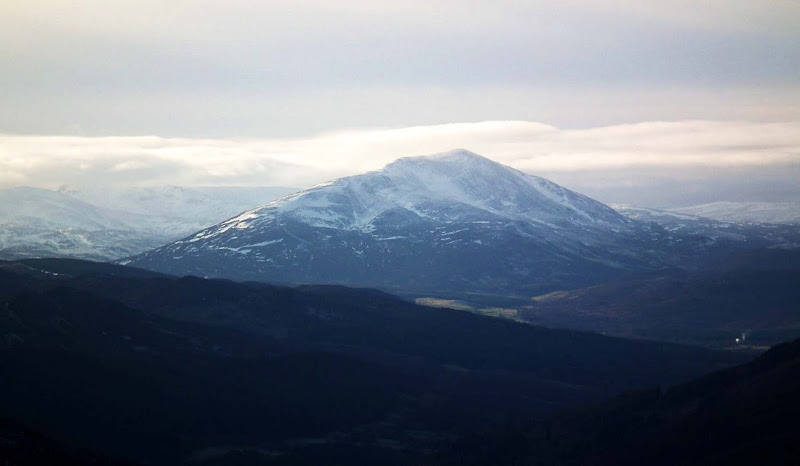 The least interesting part of the day was... 2.5 hours of driving down from Inverness

At the end of the day, we spent more time in the car than out on the hill and on the way back we complained about petrol prices... We're both seriously addicted and we definitely spend too much money on climbing (traveling around) but I'd rather be addicted to mountains than to pizza and TV

We climbed Schiehallion via the usual tourist path, so this TR won't be a great discovery... Judging by the number of reports on this hill, it must be in the top 5 of the most popular Munros

And even though it was Monday we still met quite a few people - don't want to know how this poor mountain looks like on a sunny summer weekend... a cue to the top?

Schiehallion from the car park: 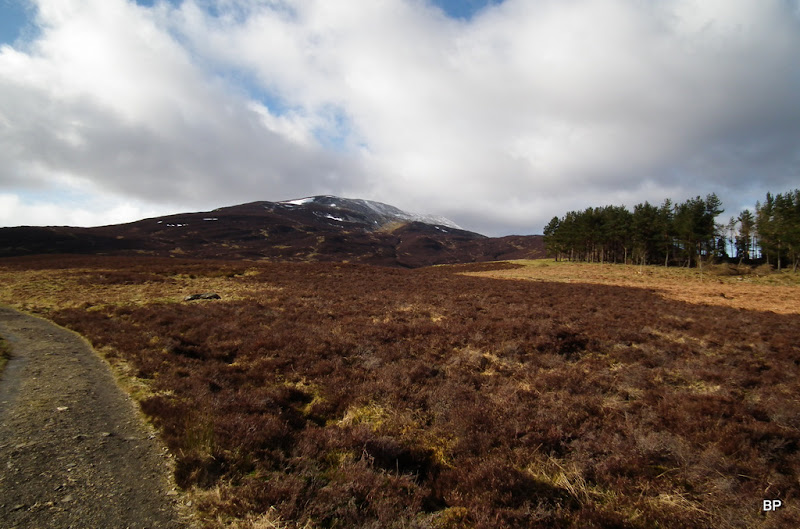 The new path, made by The John Muir Trust, is a pleasure to walk on (Kevin remembered the old one as being very boggy). In good weather this Munro presents no problem whatsoever to navigate and it's not too steep either. One can get the taste of Scottish mountains here without much effort...
Looking down the path back to Braes of Foss and surrounding forest: 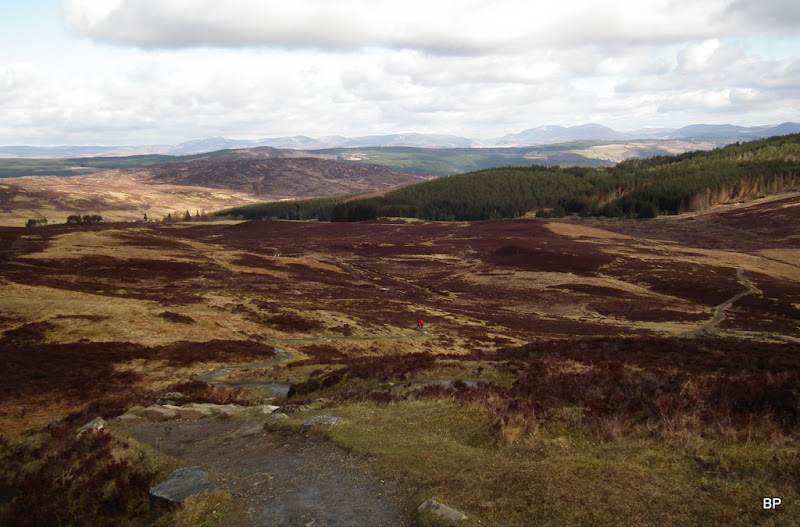 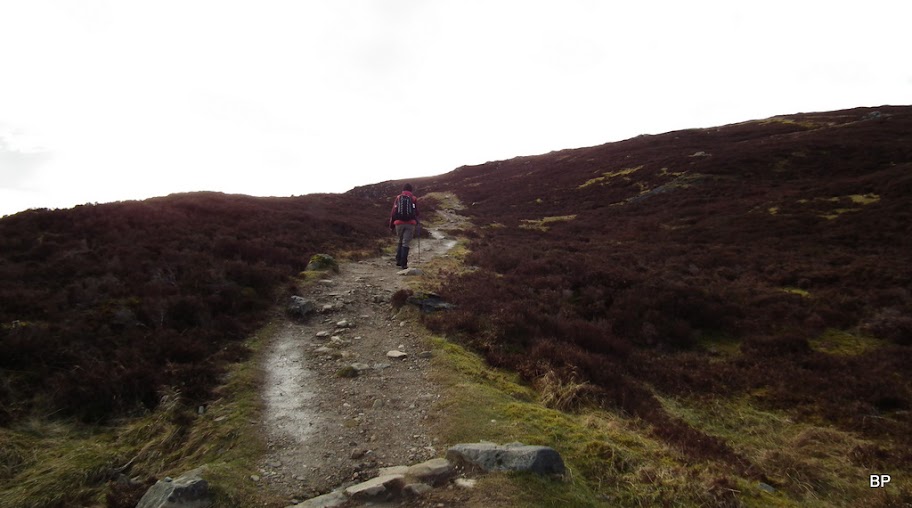 The first views are northeast, towards Loch Tummel and Beinn a'Ghlo: 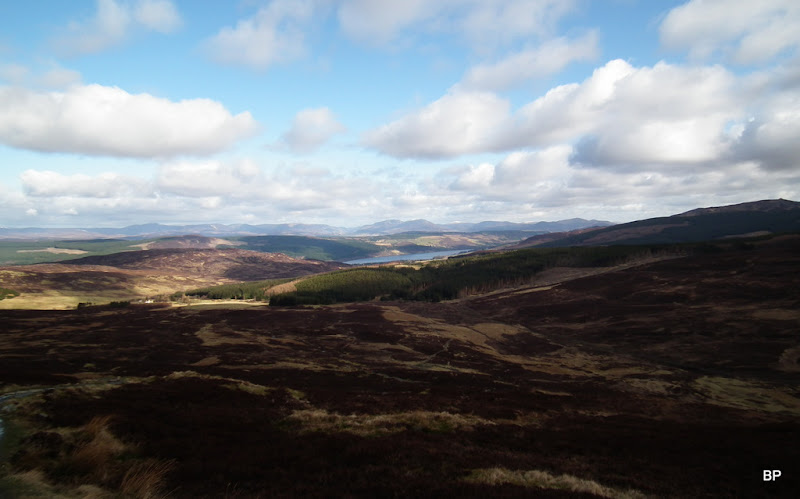 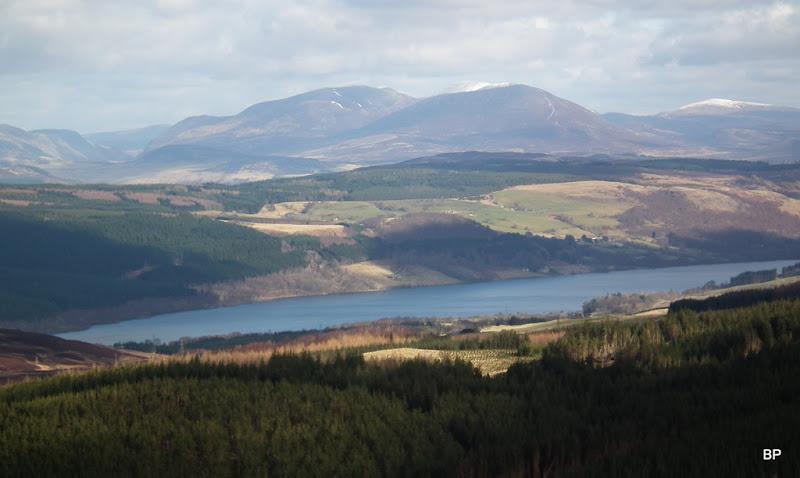 As we continued climbing, we noticed there was still snow on higher ground: 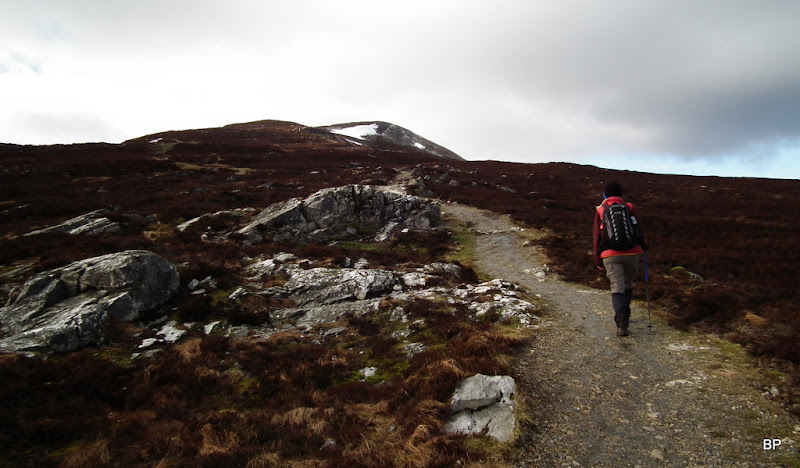 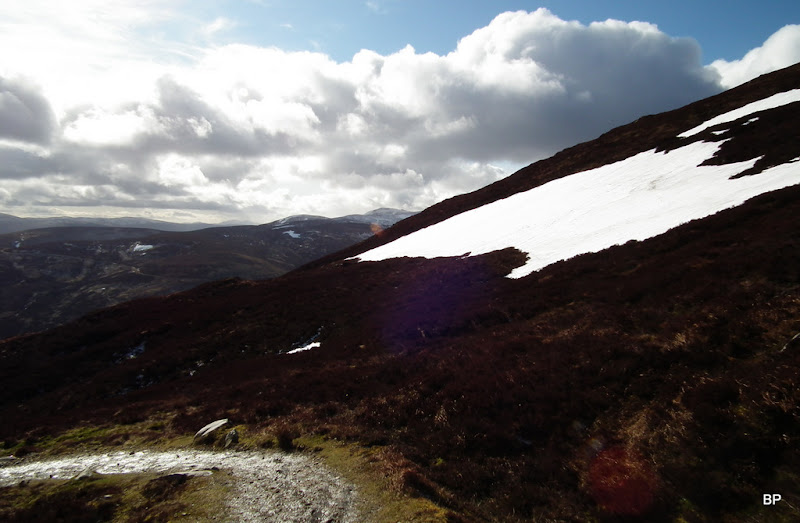 Higher up, the path becomes more stony and it leads to an interesting ridge: 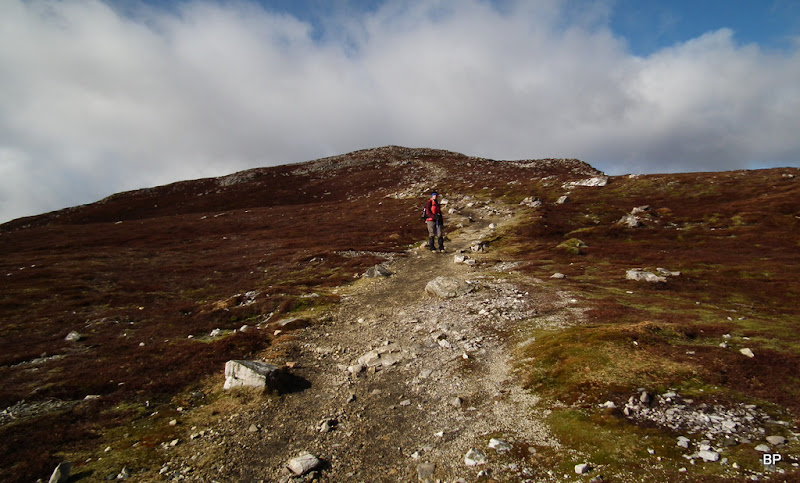 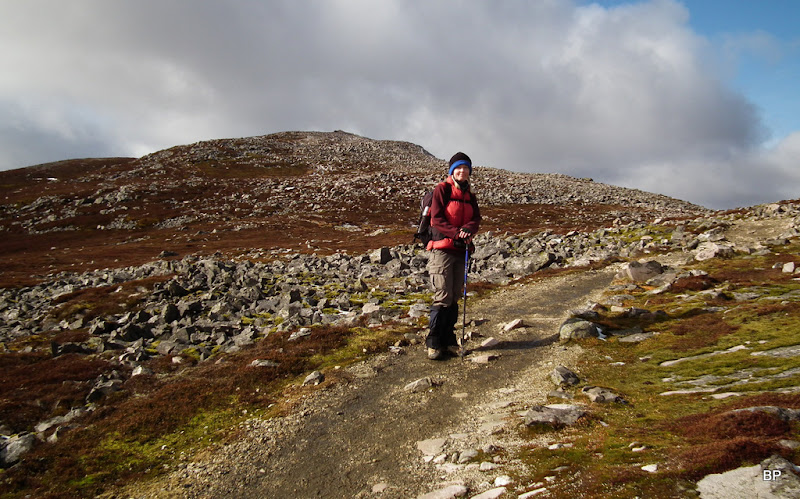 At some point the Ben Lawers group came to view abruptly... It was the first time I saw these hills and immediately they jumped on my to-do list 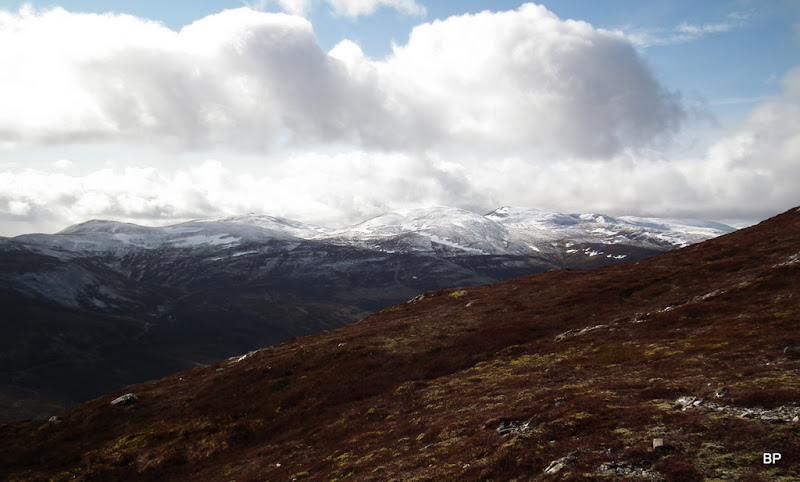 At about 900m the path reaches a sort-of-subsidiary top with a cairn: 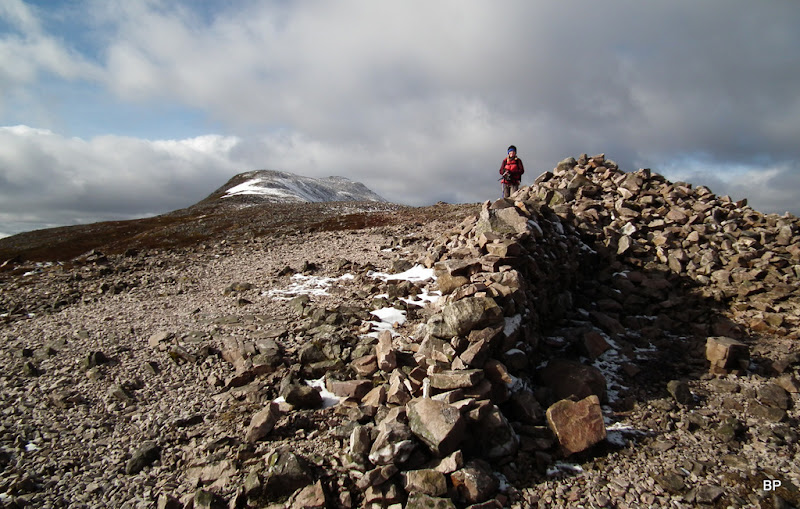 We took a short break here, as it was getting colder and we had to dig out additional layers of clothes

The very summit of Schiehallion was now close and it looked splendid: 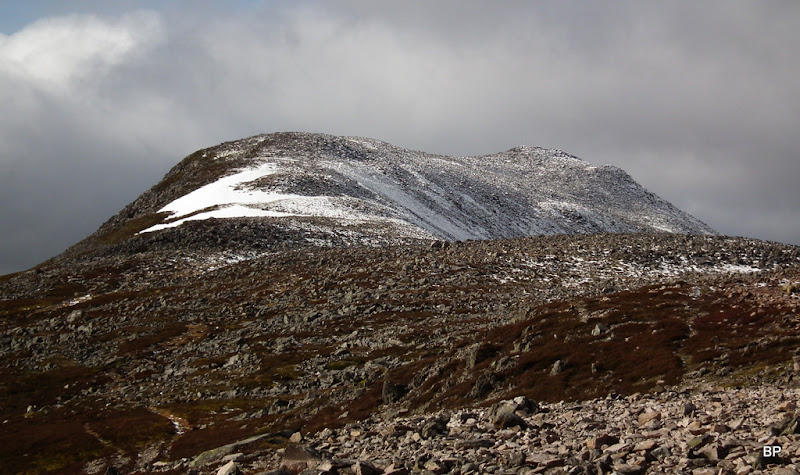 With gray clouds coming from the western side, we hoped they wouldn't spoil the day: 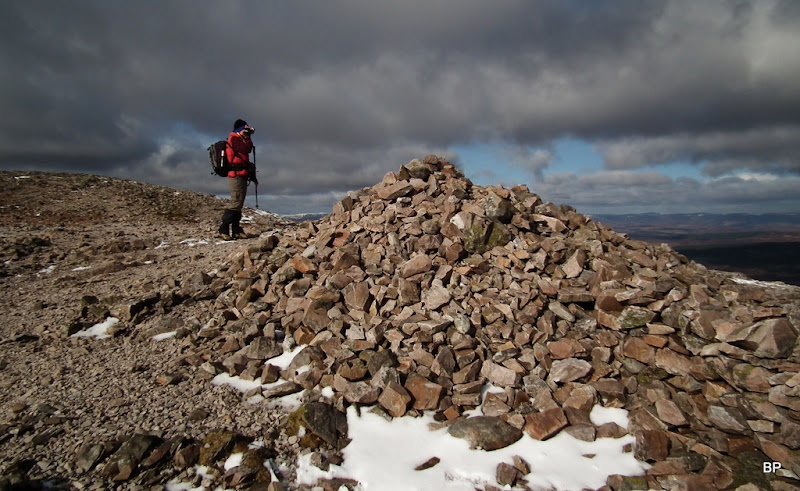 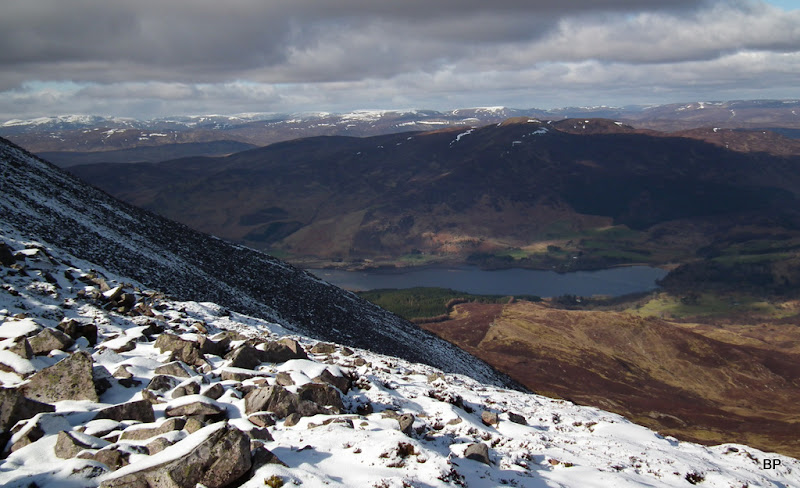 Looking east from the summit ridge: 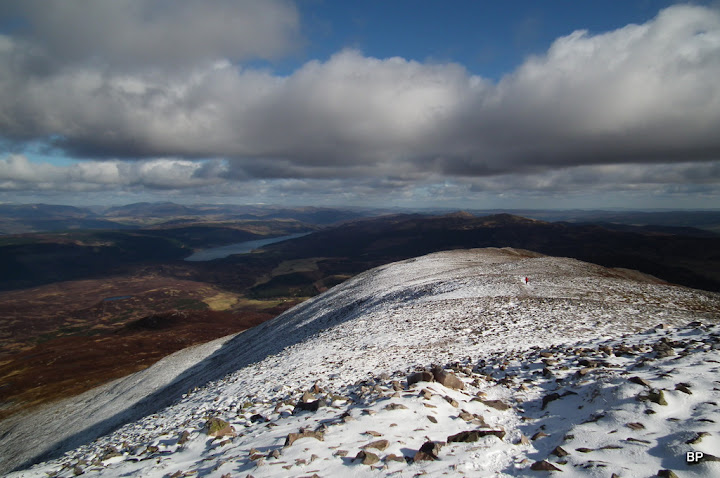 One more glimpse at Ben Lawers and friends: 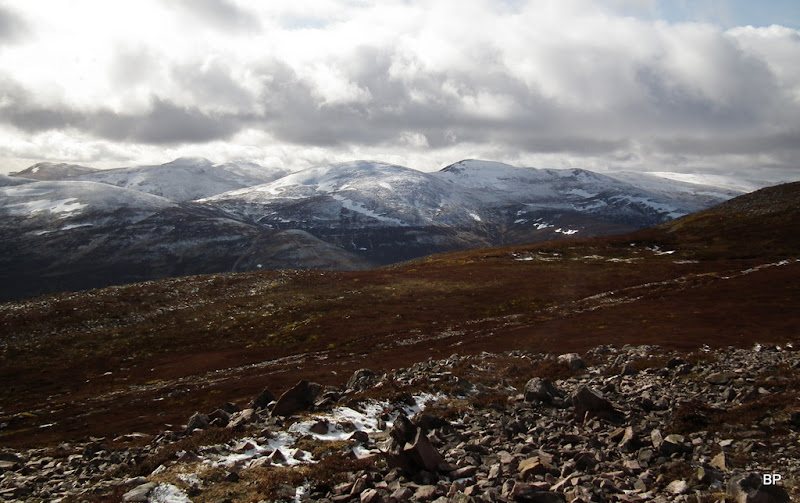 The final ascent on the boulders was a rock-hopping experience (I have nothing against that type of activity, actually it was fun

). In just over 2 hours we were up on the summit where we could admire the full panorama.
West, to Rannoch Mor: 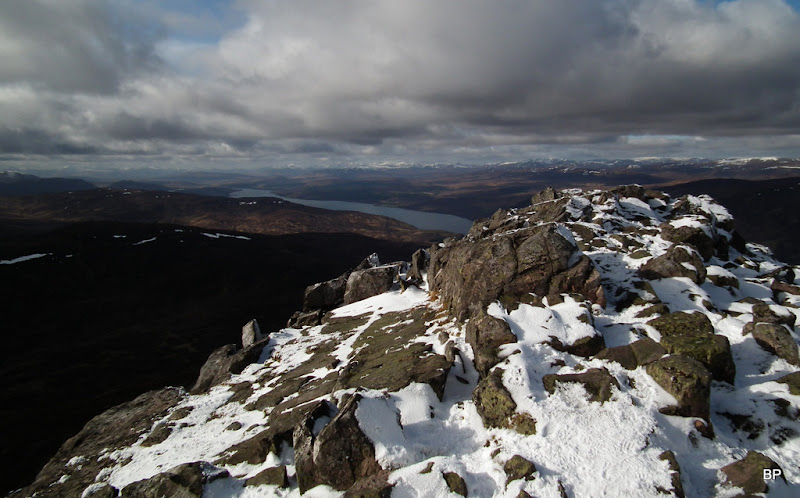 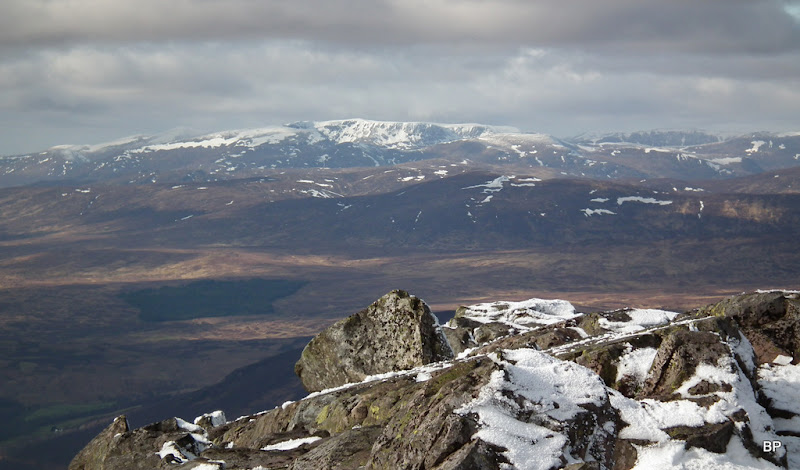 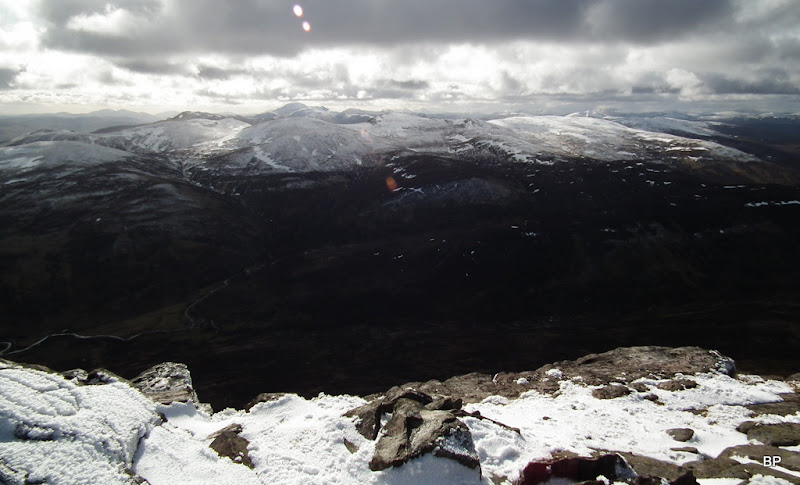 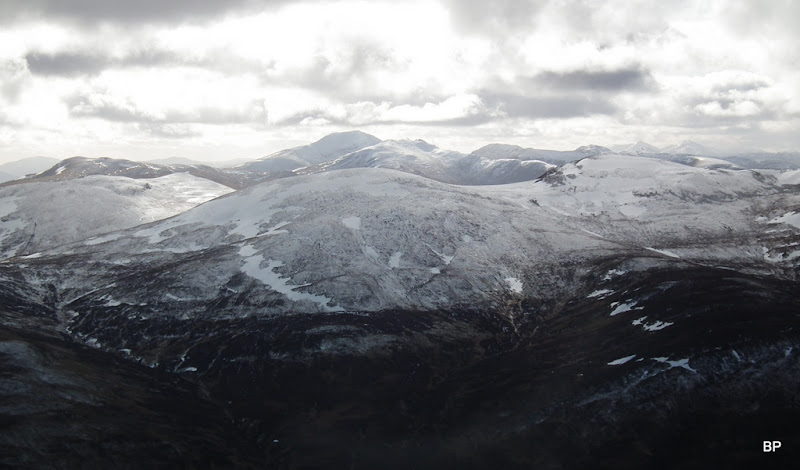 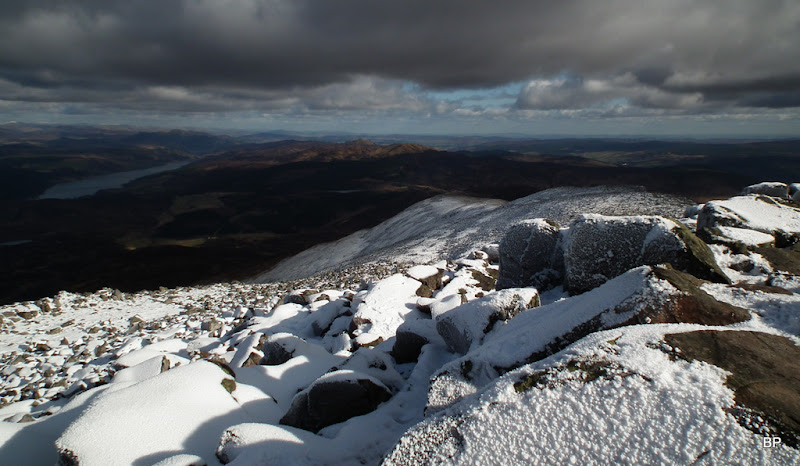 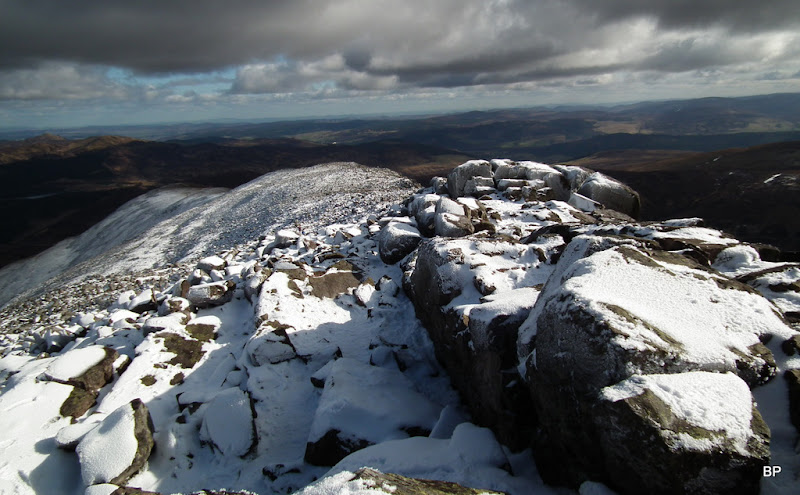 Posing on the summit with my... Ooops, it's a snowman! 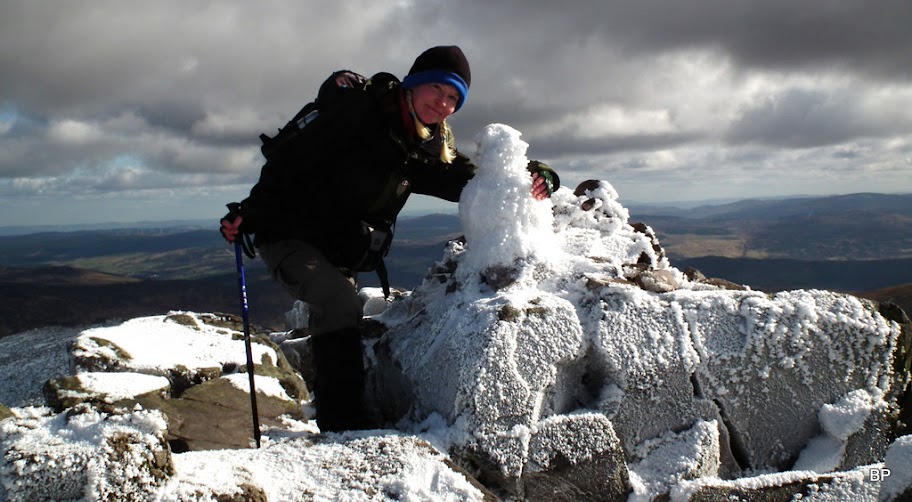 Happy just to be out there and breathe in the mountain air: 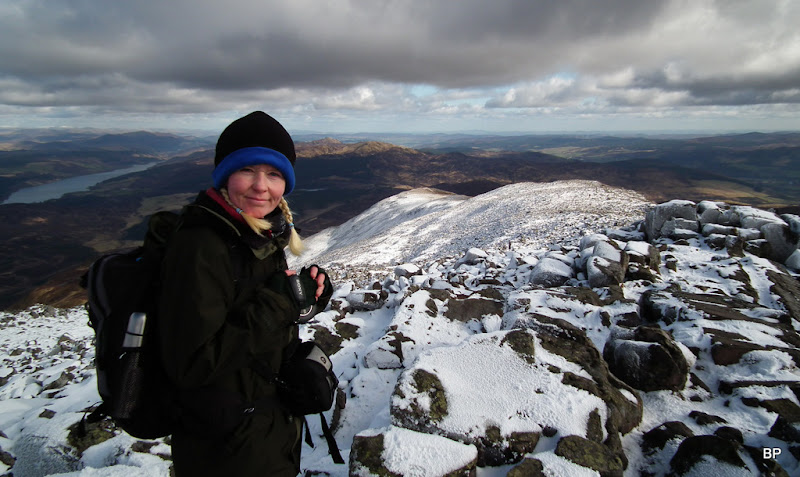 That damn Ben Lawers... It kept catching my attention... No, not another menace, please... 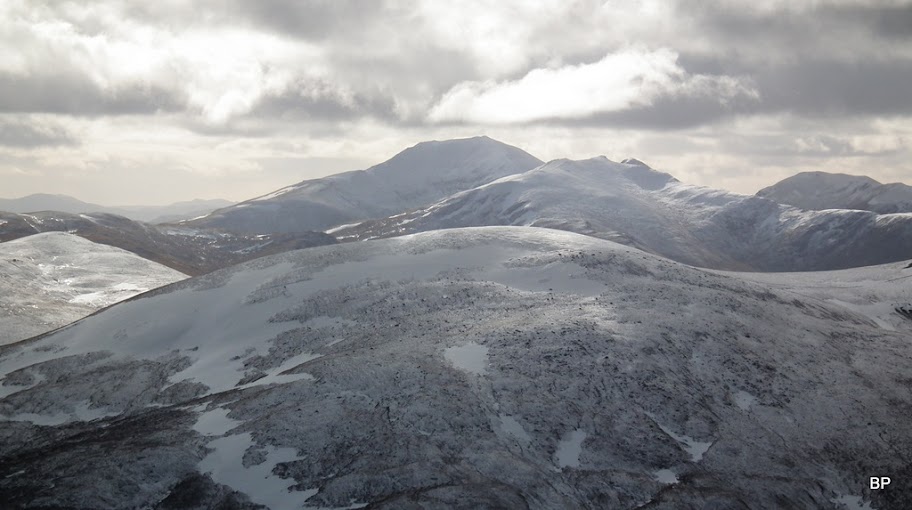 It was windy on the top, but we managed to find a sheltered place and spent some time sitting there, drinking tea and staring at Ben Lawers

Eventually we set off to go back down - and I discovered that my knee has gone a bit stiff and sore. It wasn't a tragedy and it had been worse in the past but I had to be careful on the descent route. Or maybe it was just an excuse to slow down and enjoy the views for a little bit longer? 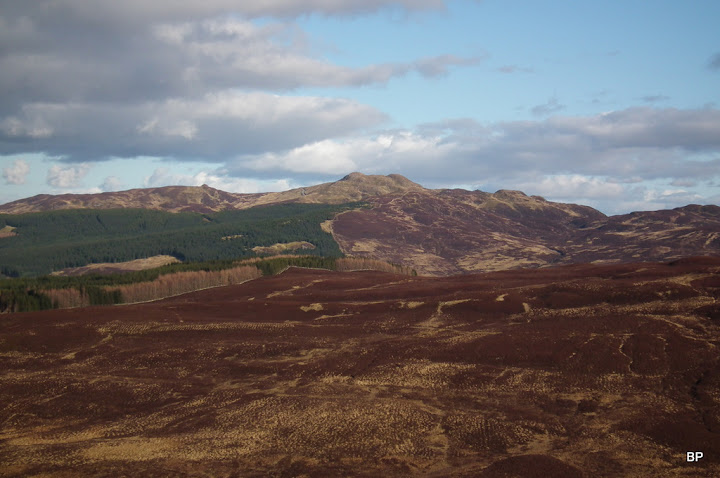 On the way down I stopped for a while by a small, pointy cairn: 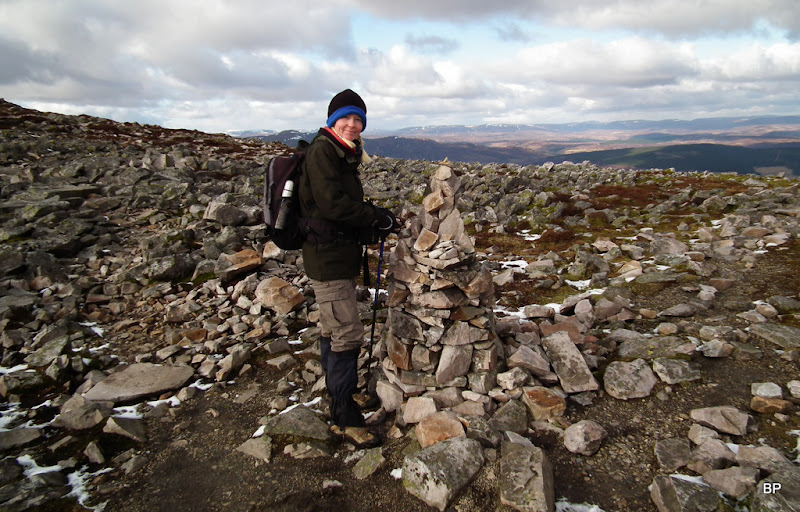 Back on the lower path, with Loch Tummel in front of me: 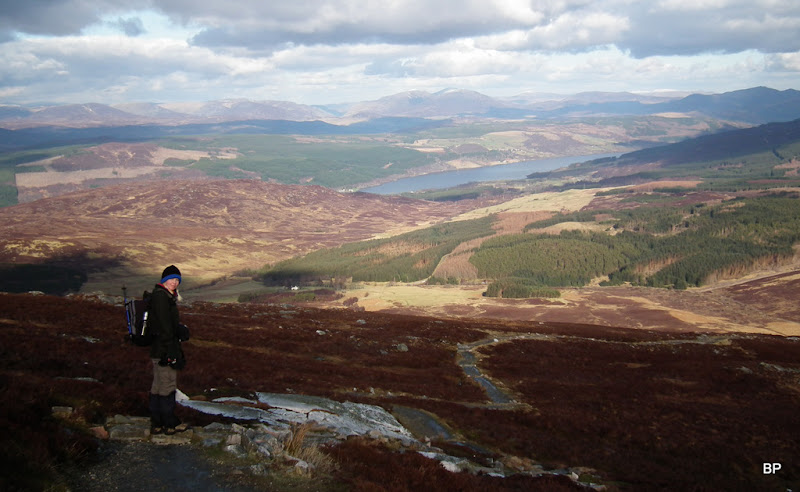 Even with me limping slightly and taking every opportunity to stop for another set of photos, we were back in Braes of Foss in 4.5 hours. Another mountain done but not forgotten. I enjoyed Schiehallion as much as any other hill - and I will highly recommend it - the views are worth it. Meow!
I still have three more TRs to write, two long Munro-bagging walks and a lovely coastal trail. These stories will come soon

Interesting ones of the Lawers Range as due up there in a fortnight, all being well.

Your recommendation of Schiehallion is also duly noted.

I agree it does look very splendid. I'm looking forward to getting up there in June, hope we get to see as much as you did, as the last time we had to turn back it was so wild.

Enjoyed the report and pics very much as I didn't take my camera with me on Schiehallion on a 'hands-and-knees windy day' at the summit. Now hurry up with those other WRs

Beautiful photos of stunning hill BP, hope your knee didn't suffer any further (usually gets worse next day)...is that your snowman??? he's awesome

What's the craic regarding cycling on the path/track?

First of all is cycling permitted and / or advisable and, if so, is there much if any time to be saved by cycling part of the way from the car park? Also, what height could the average person reasonably expect to reach by bike?

I'm relatively inexperienced on the hills but realise this may be a contentious issue. It looks like a reasonably well made track however, if it's not permitted or considered harmful to the environment, I'm equally happy to hoof it.

ChrisW wrote:is that your snowman???

Chris, that snowman was already there when we arrived. I have actually seen an earlier report from Schiehallion on WH, with a photo of the very same little snowman

He must be a permanent tenant on the summit!

BoyVertiginous wrote:First of all is cycling permitted and / or advisable and, if so, is there much if any time to be saved by cycling part of the way from the car park? Also, what height could the average person reasonably expect to reach by bike?

As for cycling, the area is in care of John Muir Trust and I don't know whether they allow cycling on their paths... The first part would be ok for cycling (though it becomes steep very quickly), but higher up it's far too rocky. At least for me, I prefer flat surface cycling

Honestly, as this is a short distance walk it would probably make little difference time-wise.

I am hurrying up with posting now, as you see, just two more TRs left...